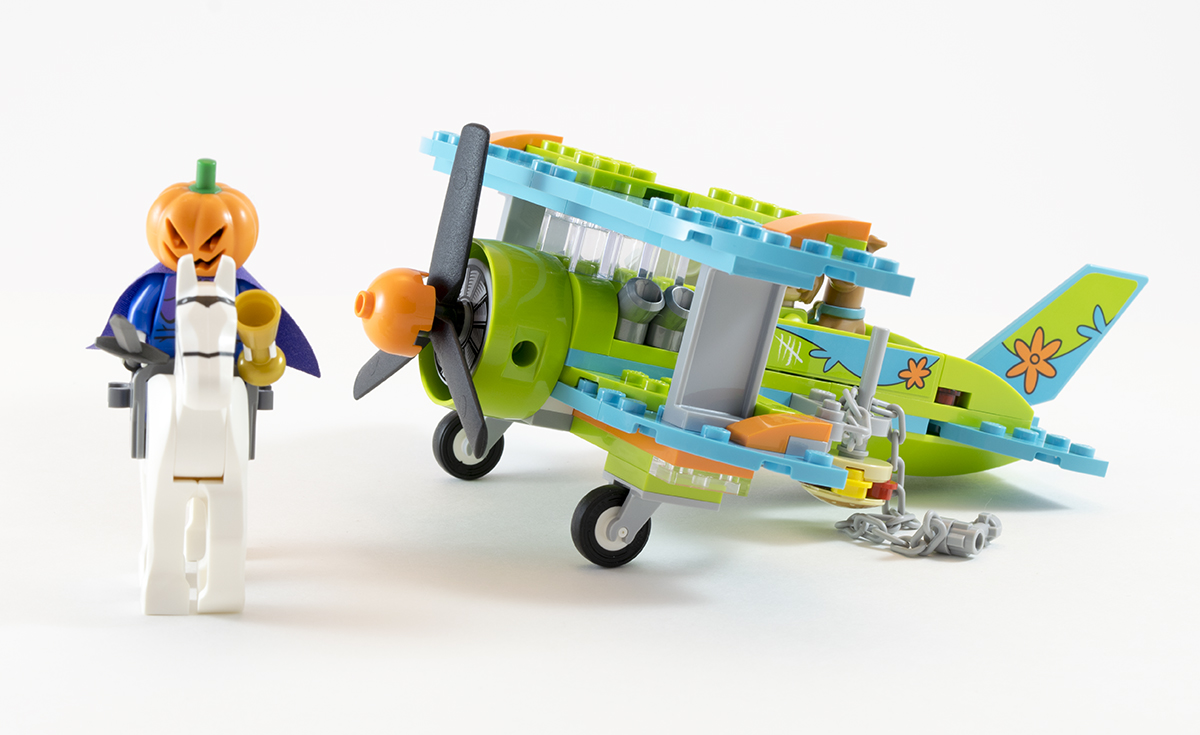 My initial interest in the Scooby Doo sets pretty much amounted to “I want the gang and the Mystery Machine,” but as the sets were revealed, the wants expanded to “okay, those stickers with the mummy are cool” and “THAT IS A PUMPKIN HEAD!” All of a sudden, I was looking at the fact that I would very likely have to buy every single one of the Scooby Doo sets to meet my needs.

On it’s surface, this seems to be the easiest of the sets to skip. Only the bad guy is really new, though the Scooby Head is also unique. The set itself has basically nothing to do with Scooby Doo, unless we’ve confused Fred from Big Hero 6 with Shaggy, and he’s providing an Iron-Man R&D budget to the gang. Just sayin’, these were basically homeless kids driving around in a van to abandoned amusement parks… I don’t think they could afford a custom-built plane decorated in their color schemes.

Honestly, I ended up reviewing 75901 Mystery Plane Adventures because I bought it at a LEGO Store when I needed a small-ish set to get a promo or something like that. At $19.99, this isÂ the second-cheapest Scooby Doo set, but also only comes with 128 parts, suddenly making all the Force Awakens sets look like some good parts value. On the other hand… pumpkin head!

I said in the Mystery Machine set, and will sayÂ the Mummy Mystery review (it’s waiting in the wings… somewhere),Â that the Scooby Doo sets seem do a great job of incorporating the Scooby Doo spirit into the sets. There were some weird things to the mystery machine, but it had so much more that made sense, from the buttons on the back of the mask to the snack stashed in the back. Normally, I review the minifigs before I get into the main parts of the sets, but I wanted toÂ part you build in this set where “weird things” vastly outweigh “feels like Scooby.” 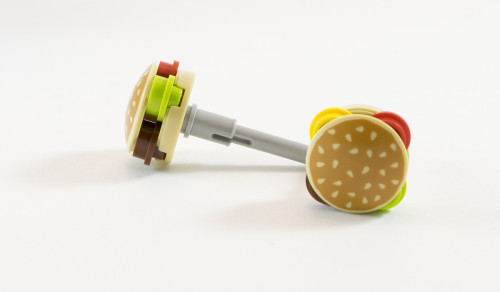 Ladies and gentlemen, we have a new winner for the single most bizarre use of a flick-fire missile in the history of LEGO. I’ve reviewed sets that used them to shoot rocks, that used them for lasers, or that had comically bad graphics to not shoot out your eye. Here, we have a literal flavor bomb. Yet, the most ridiculous implication here is that Scooby or Shaggy would willingly waste food like this (spoiler alert, they would not). That being said, I want soooooooooooooooo many of that bun piece. So, so many.

We get two minifigs, Scooby, and a horse in this set. Shaggy isn’t normally that slanty, I just didn’t move his tile and couldn’t be bothered to reshoot the picture without it. And let’s all be honest… this probably isn’t the first time the whole world has been about 15 degrees off to that guy.

The newerish version of the horse has sort of grown on me, though I’m still not all that keen on the hollow legs or the non-articulated fronts, but they do look nicer than the older ones in displays. Course, I’m years removed from the last time I actually built something castle, so maybe I just need to make a modular building carriage ride or something to use them. 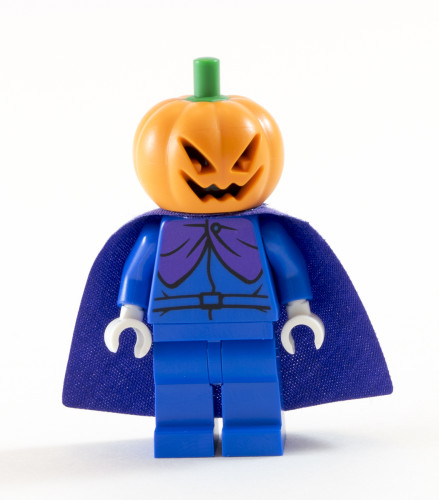 Most people I’ve talked to about this set are all about this guy. Of course, everything I know about the Headless Horseman I learned from the first season of Sleepy Hollow (it’s a shame it didn’t make it past that first season, otherwise it would have become an aimless, shambling mess that only served to confuse the viewers and make them wish that it would have never gotten renewed…). This is obviously based on the more classic tale, and that doesn’t make it any less awesome. 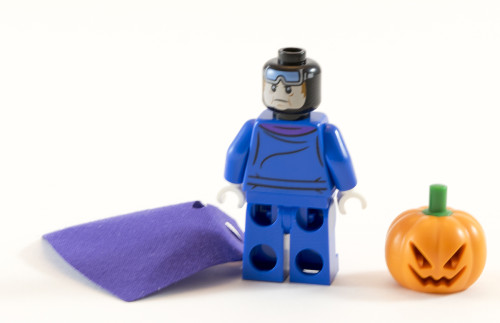 Of course, we do get some awesome Scooby figure, since this is just a guy with a great hat and a sporting purple cape. It’s also sadly typical LEGO, since the printing over a black minifig head is just too pale. There is a whole lot to love about this guy, even that torso, which could have a decent look in either a Steampunk or a castle setting. 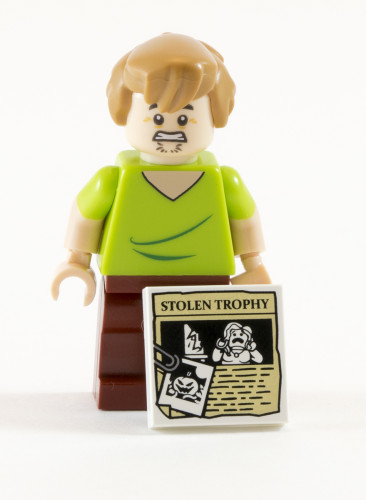 Shaggy is just… shaggy. But I love the printed tiles we’re getting in these sets, and love the fact that someone apparently created a whole Headless Horseman persona just to steal a trophy. I mean,Â how special is that trophy? 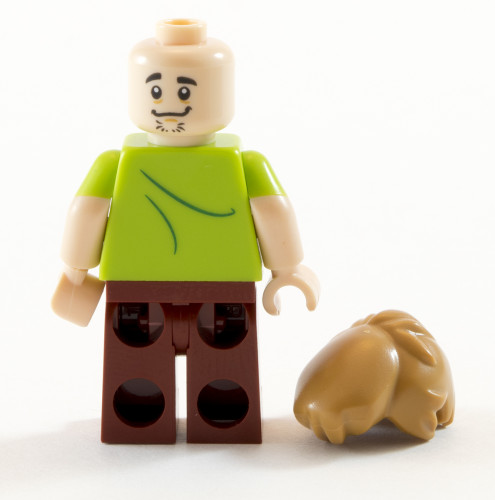 Like the other Scooby sets, which all have Shaggy, there’s an alt face. There’s probably a reason this guy doesn’t have a real job… just sayin’. 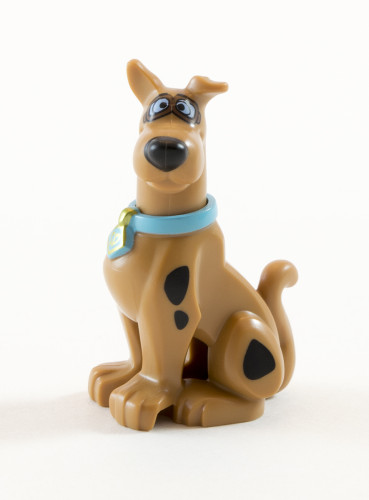 This is the cheapest set to get the “sitting” variety of Scooby Doo, which I like quite a bit more than the standing one that’s in the Mystery Machine or Museum sets. The head is unique to this one, so if you want to get the other heads, you’re still going to need different stuff, but this set plus the Mummy is still cheaper than any of the other sitting sets. 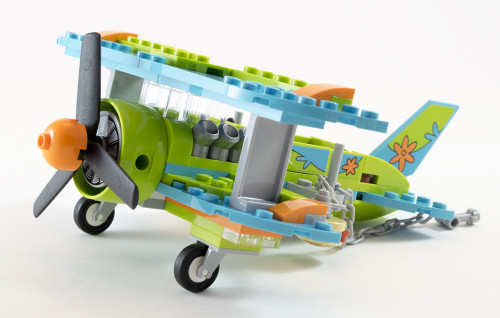 I guess if you’re going to chase a headless bad guy who has a flying horse, you’re going to need a biplane or something. Sure, a net might be a better solution to stopping him, but it’s not nearly as stylish. This could quite possibly be the most asinine thing ever included in a set, because it just makes so little sense in the Scooby Doo world. I’ll admit, I’m decades removed from watching this show… but they didn’t have a Batman-like arsenal of vehicles when I watched the show. Based on Google, the only place this plane has ever existed is in the imagination of LEGO marketing. 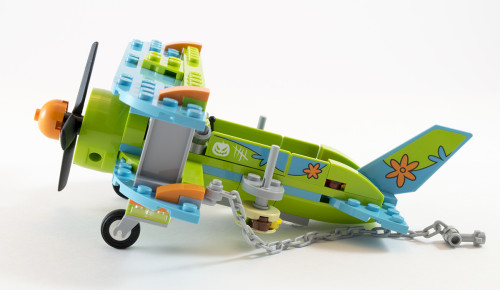 As far as planes go, this is fairly unimpressive. It’s boxy, the struts don’t match the rest of it (turn that panel into a window and make it the right color and it’d be vastly improved), and there just isn’t enough bulk to it. The whole thing is heavily stickered, and while there are some really nice colored parts in the mix, there are still only 128 of them, total, including minifigs and all the small 1×1 studs used to make those ridiculous bombs. 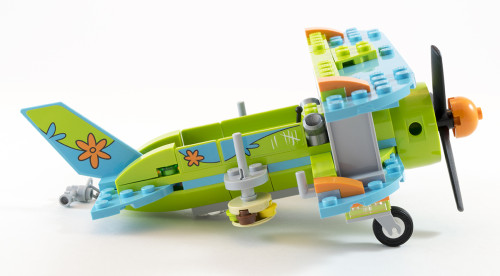 Does anyone else feel disturbed by the implication that the stickers seem to imply that Scooby has shot down (and likely killed) twelve Headless Horsemen? Is there some sort of epidemic of fat old guys stealing trophies while dressed like villains from short essays set during America’s early years? And that epidemic is so severe that the world has turned to the vigilante justice of a dog that can fly a biplane to take care of it?

It’s also kind of sad that the lastÂ paragraph made far more sense than anything in the second season of Sleepy Hollow? 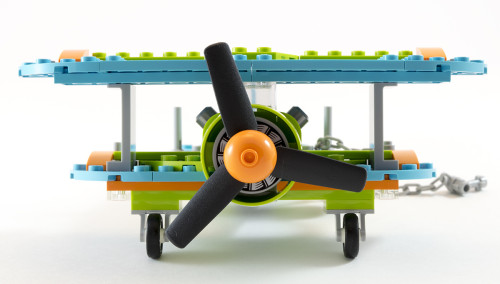 While the set is heavily stickered, there are some nice stickers to it, like the turbine pattern behind the propeller or just the general flower pattern. There are some good parts here, really, I’m just not sure there are enough. 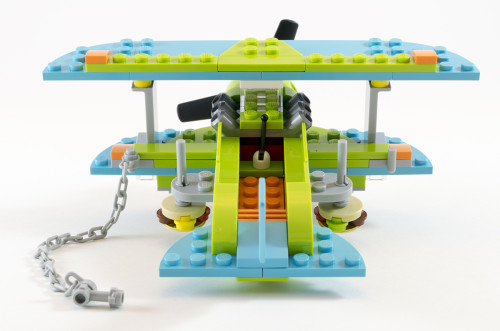 The plane does have room for both Shaggy and Scooby, but apparently the sadistic dog is also going to use his substance-abusing friend as a weapon, attaching him to the chain to presumably eliminate the horseman. That does sort of explain why Scooby would put sandwiches on the bombs… because he can probably “encourage” Shaggy to go after it when they’re dropped.

Ultimately, this sum of this set is less than the parts that make it up. Those sandwich bombs are ridiculous, but the sandwiches by themselves are awesome. Swap in a regular round tile and you have a great food piece (or leave the tile with a hole in it, so a minifig can grab it… I won’t judge). Yet it’s honestly the price and the fact that only the Headless Horseman, and Scooby’s Head, are unique that hurt the set. The horseman is enough to give it some push, and the fact that it’s only $20 does help, but it still feels pretty lacking on substance. I’m going to go with aÂ three out of five in the end. A sale, even a small one, makes this a better purchase.

Verdict: 3 out of 5. You can buy 75901 Mystery Plane Adventures right now at Amazon.com. 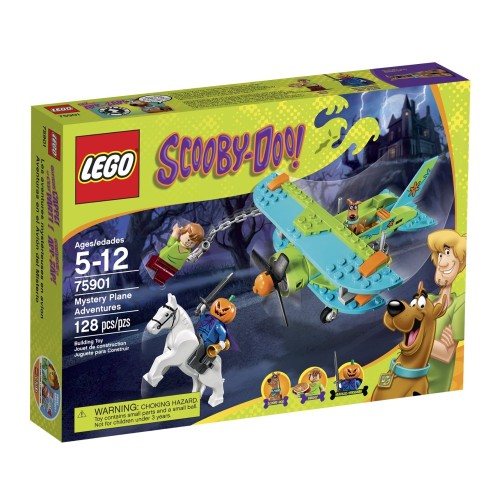