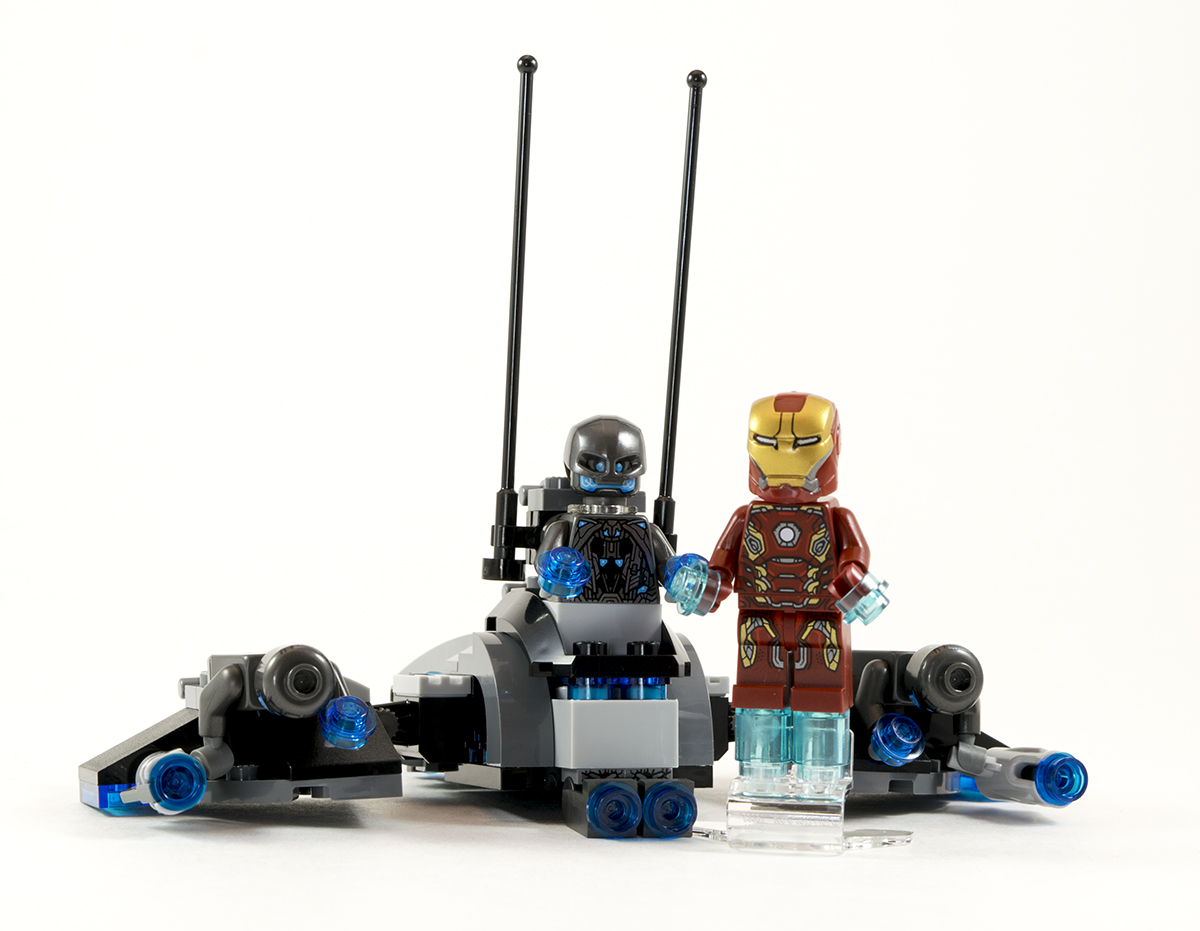 One of the things that Avengers: Ultron’s Weekend Out got right was that there were a whole mess of Ultrons around.Â In the comics, we typically only see one at a time, but there have been a whole bunch of versions and upgrades, and more than once, there were multiple bodies controlled by the same Ultron AI. Of course, he was created by Hank Pym in the comics, andÂ in the movie he was birthed by Tony Stark’s unbelievable stupidity with computers and the fact that he never read the memo about not opening attachments you don’t recognize in email.

I mean really, how safe are weÂ whenÂ the guy capable of building world destroying weapons in his sleep has the technical savy of the relatives that keep asking us to help fix their computers because they haven’t figured out that banner ads talking about computer errors should not be clicked on? I’m just saying, maybe we shouldn’t be surprised that cities get blown up when this guy is around is all.

Reviewing 76029 Avengers vs. Ultron should have sort of been an easy task, since it was only a $12.99 set. The problem is that this small set is really part of a larger scene that should combine with 76032 Quinjet City Chase. Of course, you’d never really know it looking at these sets, since they both have Iron Man and don’t look like they were really designed together.

There are a few things going for it, obviously, like a unique Iron Man and a unique (well, to this set) Ultron (or two, sort of). Unfortunately,Â even LEGO saysÂ 92 parts, it feels like fifty of them are the studs used in said blasters (and feet, and engines, and everywhere else). I liked the Hulk buster set well enough, except for the name, so I was hoping that we could continue the trend of good sets in the Age of Ultron lineup…

Oh, and obviously I’ll be mentioning some spoilers in this review. And not just that Snape kills Dumbledore.

You know, I’ve been waiting for years to use a Snape kills Dumbledore. It feels like a waste to use it there. For those who don’t get the movie reference for this set, it’s basically the setup that the Ultron Drones use when they fly under the semi that’s carrying Vision’s pod… kind of. That was less of an attack craft and more of a “pull this out of thin air” transportation system, but that’s probably less exciting as a set. 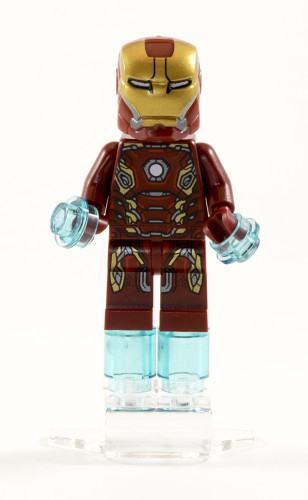 Normally I do a picture of all the minifigs together for my reviews, but it didn’t seem to make a whole lot of sense here. We do get an Iron Man Mk 55, and this is the only set that he comes in. I’m honestly not sure how I feel about the armor, but I do like the idea of all of his armor having mutton chops. 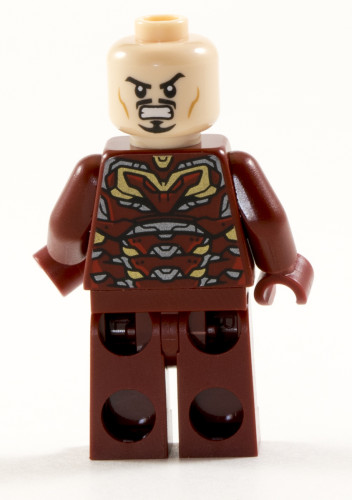 The printing strikes me as overly ornate, but I’m sure it’s decently movie accurate. There wasn’t as much emphasis in this one in what Iron Man was wearing. I know he switched at one point, but it wasn’t some notable plot-point like the last Avengers movie or Iron Man 3.Â I’ve never quite understood why LEGO doesn’t give Iron man the variety that we get with Batman, even with the movie sets. There were plenty of different armors seen in the movie, and it’d just be nice to get something other than the slight variations. 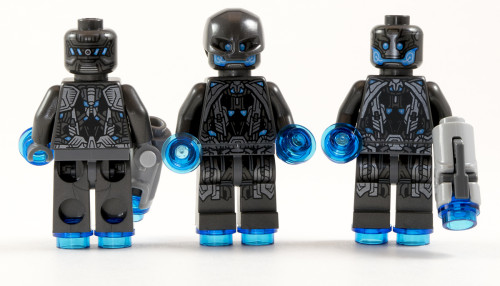 There are either one or two Ultrons in this set, depending on how you want to look at it. The torsos, legs, and heads are all the same… the only difference is that one has a helmet and a terrible backpack that has the worst of all LEGO parts, the long antenna. As a figure, these aren’t bad, and like the Ultron in Hulk Buster, there wasn’t anything overly specific to it, so you can (and probably should) use these in other minifigs. It’s a nice pattern, and can be blended with stuff like the space armor or other accessories to make some good sci-fi stuff. 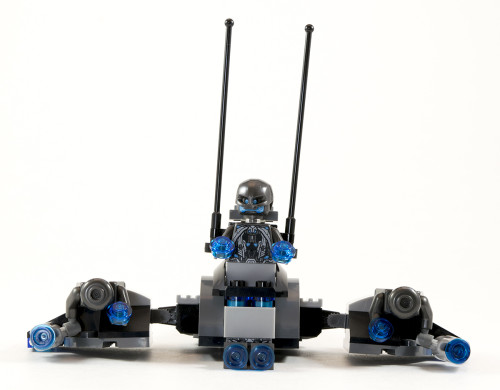 Originally, I was kind of excited to see the minifig parts integrated into the build of this set. The truck scene was one of the cooler action scenes in the movie (in that it had a point, unlike the Hulkbuster scene). Watching the drones split apart andÂ integrate directly into the truck was probably the most Ultron thing that happened in the movie (other than the pointless attacks and self-defeating plans, which is also very Ultron). 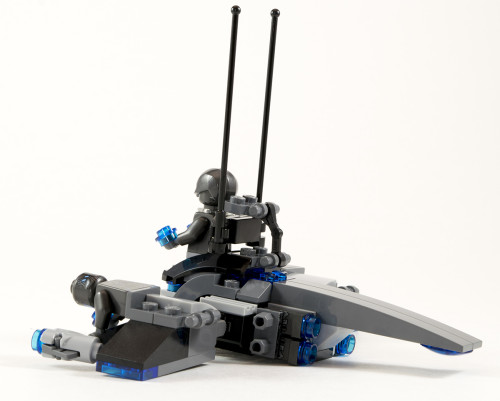 The problem is that there really isn’t anything to integrate them in to in order to make it work. The cool part about watching the Ultrons split apart in the movie was integrating into something else, and that would have made a very awesome playset feature in one of the sets. Unfortunately, they’re mostly disjointed, which means we get some sort of attack ship that Ultron seems to have stolen from the Chitauri.

By itself, the build is interesting, but it’s very sparse. This thing is just tiny when you build it, and integrating the figures is fun for a bit, but once you’re done building it, there really isn’t much there. Also, I question the decision of installing lasers that are angled away from the front of the ship. It seems to be a popular choice in LEGO sets, but I’ve found that this new technique called “aiming” is a bit more effective. 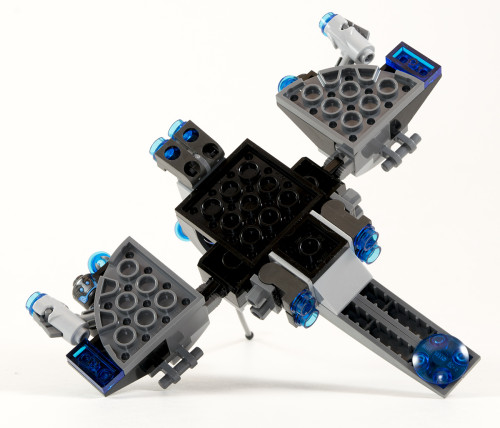 You do get stud-blaster pistols in light gray, so there is that. And my ever favorite boat bottom part, now in trans blue (that’s sarcasm, by the way… it’s a fine part, but I have so many). I’d like to say there’s some MOC potential in here, but it’s not like we get the semi somewhere… in LEGO, Ultron tried to get away with a micro-van (probably why he lost the fight).

Once you take the minifigs out of the mix, the set doesn’t fare all that much better. There simply isn’t a whole lot there. Holding this in your hand, even for a $13 set, you feel like something is missing. Even the Star Wars battle packs come with more parts than this, honestly. Part of the problem is once you pull the minifigs out, you’re left with so little, while most of the packs don’t use minifigs as parts.

I’d love to say that the price alone is worthy of three stars, but the Iron Man isn’t unique enough to put up for it, and the Ultrons aren’t notable enough to make you want them. If you take them for parts, sure, there’s some value here… but realize how much of the set is taken up by filler parts. There are 18x 1×1 dark blue studs (used in the launchers and for Ultrons repulsors), 3x Light blue 1×1 studs, 3x 1×1 round bricks, two of those boat bottoms, and 4x 2×1 trans dark blue plates. That’s 30 parts, a third of what we get, taken up by parts that you use to fill in gaps at the Pick-a-Brick wall.

I’m honestly not sure we have a good rating for this. It’s $13, so it’s not as if you’re out a ton of money if you invest in it, but it feels squarely like a two stars, at best, set. The minfigs aren’t enough to make up that gap, so I’m going to leave it right there, two stars out of five. It may be worth it if you want to torsos, or if you find it at a very good discount, but it feels like there’s so little of substance here. There are other sets with Ultrons that are worth more, so you may be better off spending your $13 elsewhere.

Verdict: Two stars of of Five, sadly. Luckily, it’s the lowest end set, so you won’t be out a whole lot when you pick it up at LEGO Shop@Home. 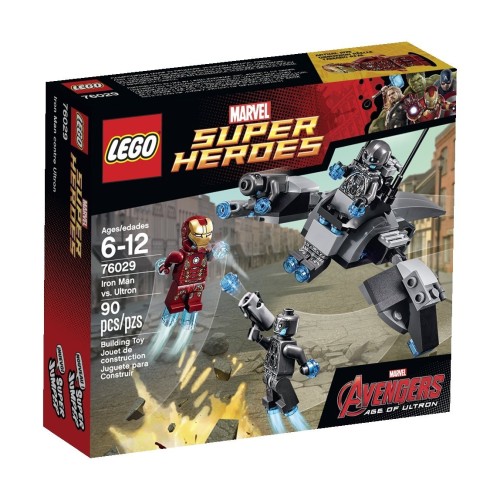