We got four battle packs this year, making for a shocking eight million (give or take a few million) different packs being available. In the never-ending war that LEGO wages against our wallets and purses, the biggest battles are not over monsters like The Helicarrier or UCS sets like Slave I… it’s in the small things like battle packs with Stormtroopers where the most damage is done.

This is a pretty unique pack, in that the stuff in it is based on The Force Unleashed, a seven-year-old game that wasÂ kind of popular at the time, even though it got middling-reviews at best (I never cared for it all that much, myself… controls were frustrating). At the time, it spawned a single set, The Rogue Shadow, which is probably one of the absolute worst sets ever made (that did have some awesome minifigs), so it’s really weird to see it now.

Was this a leftover idea that just sort of squeaked through? There are too many new parts in the thing to not see it as a new design, so I’m sort of at a loss to say where this came from. It’s even more curious, since The Force Unleashed isn’t even canon at this point (and was pretty dubious to be considered that anyway), so what is this doing in the lineup? At $13, like all battlepacks, and coming out against three other packs, this might end up being the odd-one-out.

I had somewhat mixed feelings about this battle pack, honestly. I didn’t like the game, but I do like some variety to Stormtroopers in the mix. I still love the Shadow Troopers from the TIE Crawler, a vehicleÂ that is the maximum mixture of terrible ideas, and owned several of that set thanks to some surprise Target clearance many moons ago. 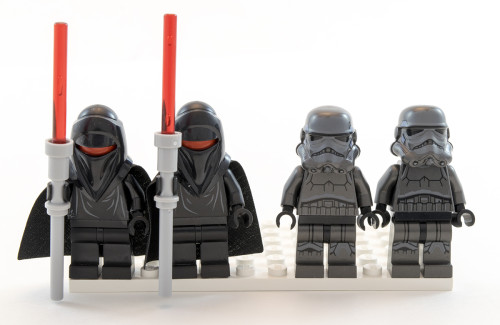 For minifigs, this is split between two Shadow Guard (basically a reversed Imperial Guard) and two Shadow Stormtroopers, which are are not be confused with Shadowtroopers, Shadow Troopers, Black Hole Stormtroopers, or any of the other “it’s black, so that means it’s edgy” trooper varieties. 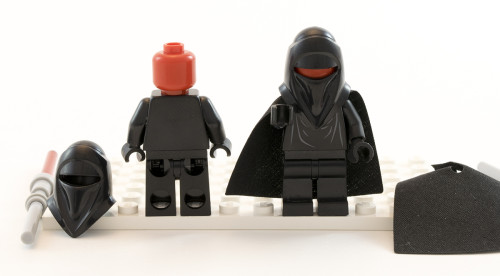 The Guards are a complete reversal,Â and use a plain red minifig head. For parts, these are actually kind of cool. The hood could be used in other figure types now that it’s in black, the torso is quite generic, and having the minifig head in red is always nice. 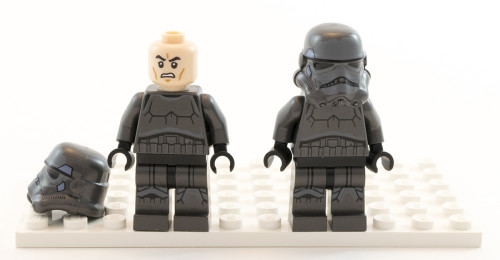 The troopers are similar to the Rebel trooper redesign, using a very similar (but not identical) printing. The dark silverish color (I’m feeling too lazy to look up its official name) is actually pretty nifty here, and if you take the helmet off and sub it for something else, you have a pretty good generic armor. 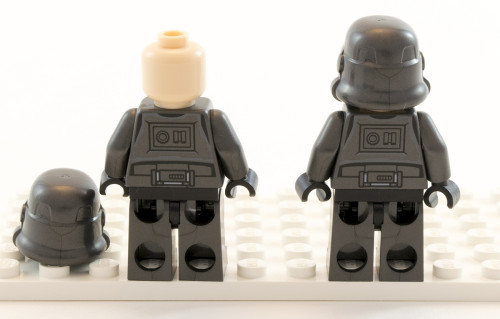 The face is just “generic trooper” face that’s used everywhere, so there’s no alt-face. They also have to take a different route with shading, lightening up the color instead of darkening it. These also aren’t as simple as the black shadow troopers from the crawler (or when they were used as a one-off in a battle pack later). 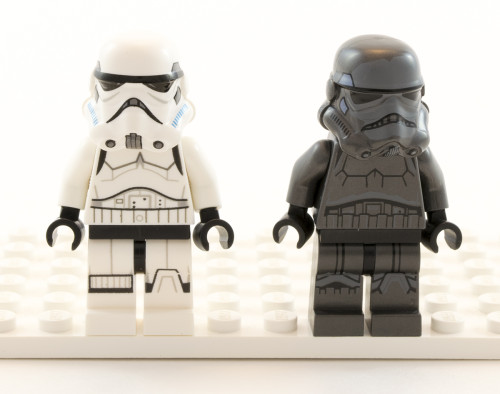 The printing is similar, but different on the knee, belt, and the shading of the armor pattern. The mold is the same for the helmet, but just changing the printing pattern made for a very different look. It’s kind of impressive, actually, how much some ink can change up the look. 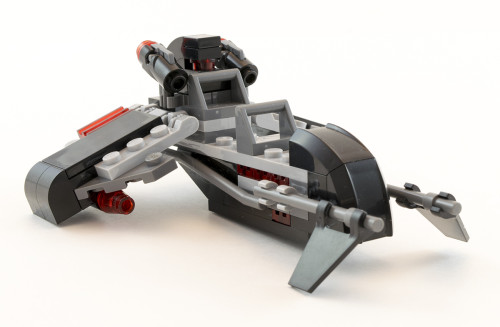 The battle pack includes a speeder, because they have to have a vehicle or something. I’m kind of torn on what comes in the pack. The vehicles are cool in smaller numbers, but if you buy a lot of army building stuff, you start to appreciate more generic parts or scenery more. I thought the old Snowtrooper Battlepack did a great job of mixing that line, giving us a simple speeder and a gun emplacement. 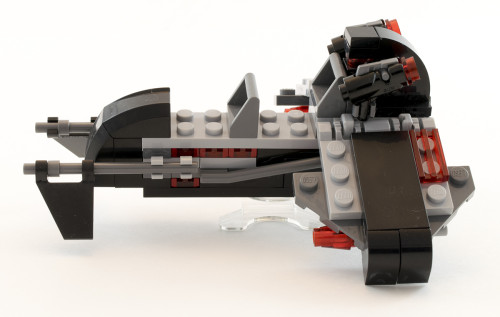 No, it doesn’t include a jumper brick from the DC sets… it was just convenient for holding up the speeder in the softbox. For a speeder, this is a decently tight build, but it is kind of disjointed around the seating area. The wings, back, and front are all smooth and nice, but the seats are less part of the build and more gaps in it. 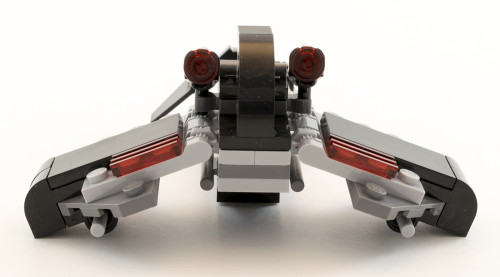 Parts wise, you get some decent stuff in here, but it’s pretty small. I do like how there are holders for the blasters, one of my complaints about the Transport. But 2×4 tiles, trans-red grills, and some black round slopes are nice to have.

Ultimately, my complaint about this set is that it’s so out-of-step with the other sets. The game the source comes from is just Steam Sale fodder when it’s down to 99 cents or something. They don’t really fit with other figures unless you’re going for something specific where you need colors that are different, and that makes this a whole lot less desirable as a battle pack.

Each of the figures, by itself, is just fine, but not the kind of thing you’re going to want a lot of, and the speeder is interesting, but not something you’d want a bunch of. Grading a battle pack is a little different from grading a normal set, since these are things intended to be purchased multiple times, and on that realm, this one just comes up a bit short. That makes it aÂ three out of five, probably worth buying once as a collector, on sale, but not the kind you’re going to buy a dozen of (like those delicious Stormtrooper packs). 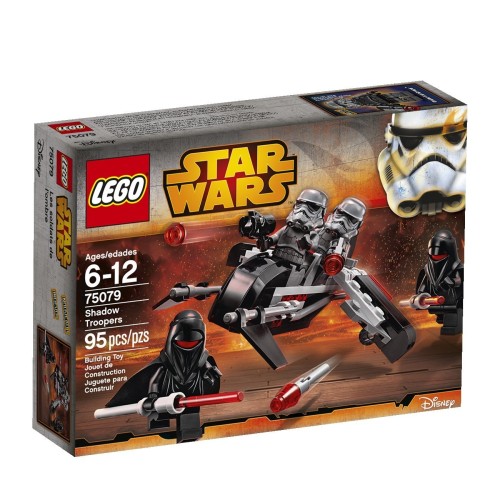