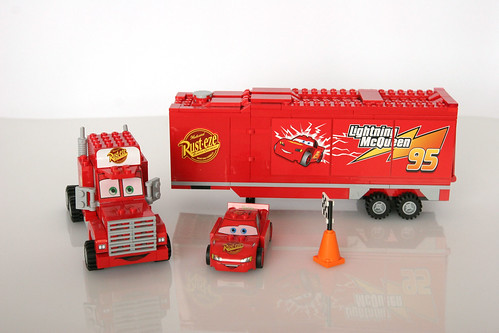 Simply put, 8486 Mack’s Team Truck is a great set. I can’t find a lot of fault to it, and it’s pretty much everything you’d expect from a Team McQueen set.

The set consists of Lightning McQueen, Mack, Mack’s Trailer, a tool rack, and a cone with a checkered flag. The cone with the checkered flag seems to be the oddball out of the group as, unlike the tool rack, there’s no place to store it inside the trailer. The set would have been just as good without it so its inclusion seems to more of an afterthought than anything. 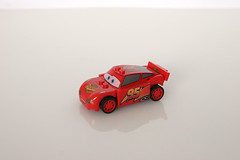 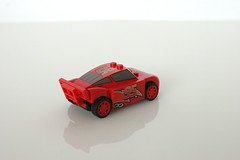 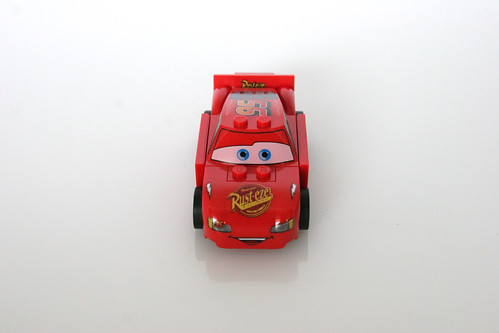 Lightning is in a unique deco that can’t be found in any other set. His case of pinkeye that plagued him in 8200 Radiator Springs Lightning McQueen isn’t as pronounced, it’s actually a lot better, but he still could have used another pass or two under the white paint gun. 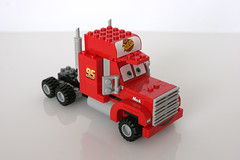 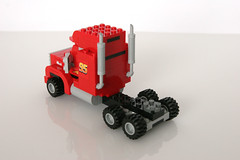 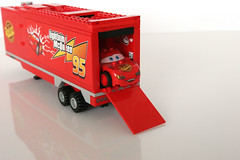 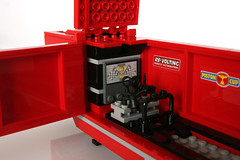 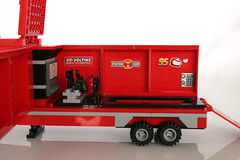 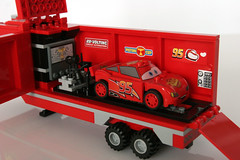 Everything you expect to be there in a Mack playset is faithfully represented. Lightning fits snugly inside the trailer thanks to a smart 7-stud wide construction. Although the angle of the ramp door is a bit steep for Lightning to roll up and down without hiccups, it works well enough. The interior of the trailer is sparsely decorated with a small amount of stickers: he has a widescreen TV, a few sponsor stickers and his phone dialed into his agent Harv. A few more stickers would have been welcome to really give the interior more life to accurately reflect what you’re shown from the first Cars movie. There’s also a small area inside the trailer to store the tool rack. 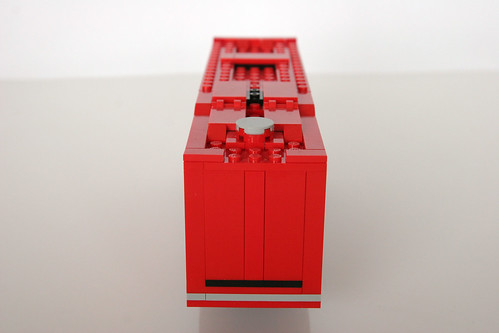 What I liked: The trailer is 7-studs wide. I suppose they could have made it 8-studs wide to make it a simpler build, but I like the fact that it’s an odd number. 99% of what you build in official sets is an even number of studs wide or long. An odd numbered build uses different construction techniques to fit even-width elements into an odd-numbered space. And since this is a toy geared towards children, this type of build can teach them new building methods. It may not be as compelling as SNOT (Studs Not On Top) designs, but a handy skill nonetheless. So kudos to the designers for an unconventional build. 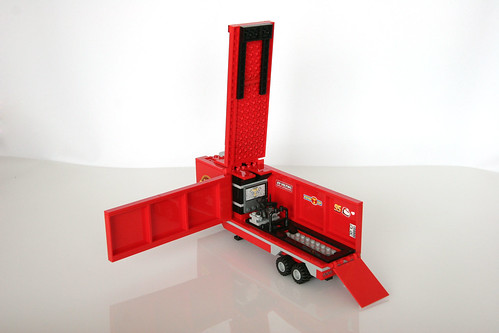 What I didn’t: The method used to open up the trailer could have been a lot better. You flip the roof upwards and one side panel outwards creating these GIGANTIC flaps. Why couldn’t the designers use this same trick: 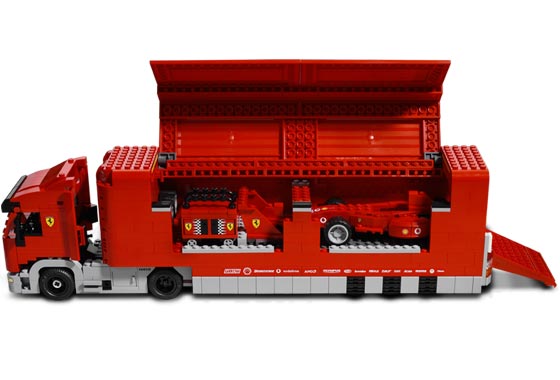 from the 8654 Scuderia Ferrari Truck set? One flip top panel is so much more elegant and easier to handle than two giant ones.

Verdict: 8486 is a great set faithfully representing Lightning McQueen and his teammate Mack. Priced at $39.99 MSRP, you get 374 pieces which isn’t terrible at all and for the price you get a complete playset. Ignoring the cone, everything tucks inside the trailer properly for transport and to keep things tidy. I would suggest avoiding opening up the trailer, its incompetent design might make you regret the purchase otherwise. 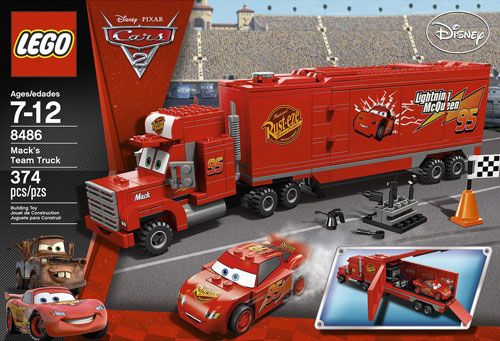