The second to last week of Bricktober is here and if you’ve visited the site or seen this post in the forums it may have seemed like this year’s Bricktober is a bit lackluster to say the least. Luckily Toys R Us Canada doesn’t seem to have their act together and if you frequent the website that should come as no surprise. I could make some point about knowing the future changing the outcome of events, but I won’t because I just did. This weeks deals are better than previously advertized with all Star Wars & both SpongeBob Squarepants sets at a 20% discount which also applies to the Creator & Hero Factory themes. This is a great way to pick up the 10216 Winter Bakery set at $60 or the 10214 Tower Bridge for $240. Spend the usual $35 and you’ll walk away with MY personal favourite of this year’s magnet assortment, the astronaut. 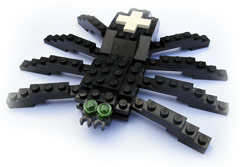 In preparation for Halloween this Saturday between 12pm & 2pm they’ll be hosting the latest seasonal build event, so bring the kiddies and let them build themselves a creepy crawly spider*, but get there early as they’re limited to 100 per store. I attended last years event and my son really loved the jack ‘o’ lantern and I’m hoping he’ll be equally impressed with this years offering.

* Spider not actually creepy or crawly.