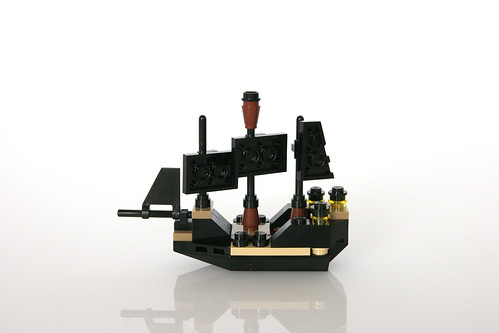 There isn’t much to this review so I won’t bother with the more link.

30130 MINI Black Pearl is a Target-exclusive in the US and is only available pre-packaged with Pirates of the Caribbean: On Stranger Tides 3D Blu-ray Limited Edition 5-disc set. In the UK, they were given away earlier this year as a Sun newspaper promotion. Free is about the right price for this set. By itself, it’s a terrible representation of the iconic pirate ship. Since I am not a big Pirates fan nor do I have a 3D television, the only reason I bought it was to do this review and hopefully save a few of you readers out there from making a terrible purchase. 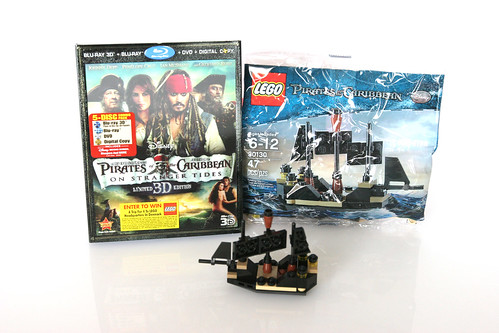 What I liked: Nothing. Since technically it’s ‘free’, it’s a neat little bonus to get some extra LEGO bits

What I didn’t: It’s a terrible model. It’s obvious just by looking at the sails how inaccurate the model is. Adding a few more plates and clips and a longer bar for the center could have easily remedied the inadequate number of sails. The MINI model also has an inverted brown cone which I believe is supposed to represent a Crow’s Nest which the Black Pearl doesn’t even have. A 1×1 clip plate could have replaced it and represent the flag. And the bow of the ship? Hideous. I mean, who the heck is designing this thing and what are they basing it off of?

Verdict: Save your $30 bucks and put it towards the System scale 4184 The Black Pearl

. Unless you’re a hardcore Pirates fan that has a 3D home theater system and doesn’t mind ugly LEGO sets, you’re better off spending your money on something else.