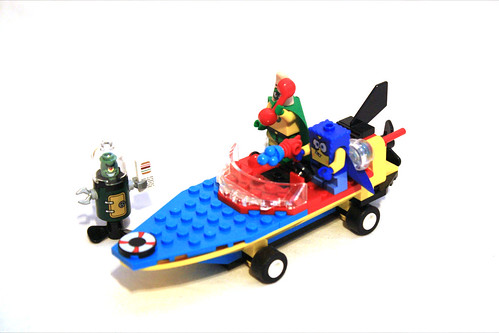 A simple, fifteen dollar set featuring both of the main characters and the villain along with an iconic vehicle from the series. Sounds like a great deal right? Well, there are a few catches.

When I first heard the name â€œHeroic Heroes of the Deepâ€ I was expecting a set finally including Mermaid Man and Barnacle Boy and possibly the other members of the International Justice League of Super Acquaintances or their arch nemesis Man Ray. Instead, we get Spongebob and Patrick wearing costumes which have never been featured in the show along with Plankton in a similarly random â€œrobot suit.â€ 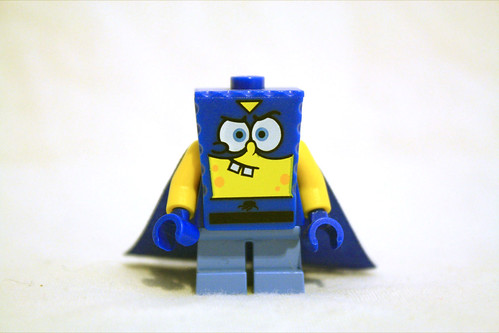 The figs are all unique to this set. Spongebob gets a red retro-blaster to use as a bubble blower along with a new cape style with only one neck hole. The cape is a bit long for Spongebobâ€™s short legs leading to some curling on the end (though I think it helps make it look more dramatic). Speaking of his short legs, he is the only minifig to have them in medium blue other than Young Boba Fett from Jangoâ€™s Slave 1. 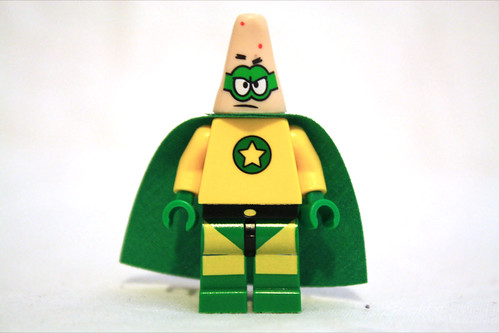 Patrick is fairly un-noteworthy, simply coming with a green standard cape. He doesn’t even get any accessories. 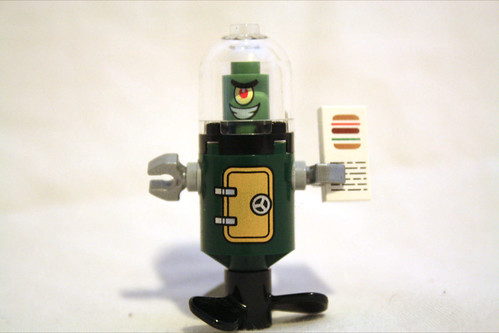 Planktonâ€™s face is printed on a 1×1 cylinder for a clever way to represent how tiny he is. He comes with a robot suit and a 1×2 printed tile of the Krabby Patty Secret Formula, an item thatâ€™s seriously over due. I would have preferred if the formula had been a bottle with printing of a note inside for the sake of accuracy. 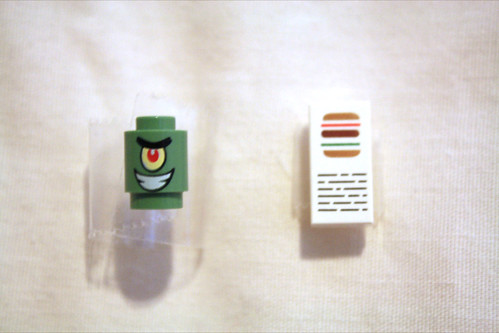 Now on to the meat of the set: the â€œSuper-Fastâ€ boatmobile. 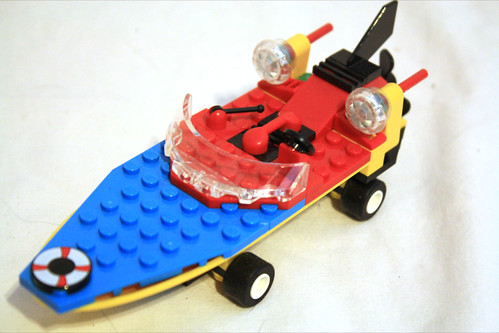 Unfortunately, this meat is horribly undercooked. At first glance the vehicle is instantly recognizable to any fan of the show. It has a great bright and colorful look that really makes it pop and makes use of the new color â€œdark azureâ€ which is only available in this set, 3816 Glove World, and on the minifigures from the Alien Conquest line. The boatmobile also includes some fun features like fold-out headlight missiles and, my personal favorite part of this set, the red hotline phone sitting between the seats. However, a closer look will show you the glaring flaw of the vehicle: it has nowhere for the heroes to sit. The cockpit is completely level with the front and sides of the boat forcing Spongebob and Patrick to stand on top of it while driving. 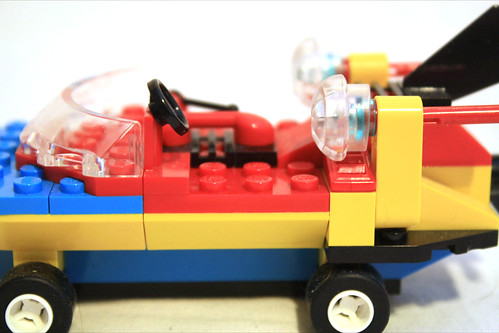 I canâ€™t imagine theyâ€™ll be able to go super fast at all without running the risk of hitting a bump and flying out of the car.

What I liked: The accessories, such as the red hotline phone, the Krabby Patty Secret Formula, and the bubble blaster.

The colors, particularly the introduction of â€œdark azure.â€

Plankton. Since they gave him a robot suit instead of printing a costume on him, he fits in with the normal cast of characters. Plus, he has a new face printing which looks far better than the old open-mouthed goofy printing. This is also the cheapest set to get him in.

What I didnâ€™t like: The minifig selection. The minifigs themselves are good; however this set would have made far more sense if it had included Mermaid Man and Barnacle Boy, or at least given Spongebob and Patrick costumes from the show, such as their IJLSA costumes or even Spongebobâ€™s hall monitor uniform and Patrickâ€™sâ€¦ ice cream cone on his head.

The ridiculous design of the boatmobile. The only saving grace here is that LEGO has finally made a vehicle that fits two people. Now they just have to make one that seats two people.

Verdict: If youâ€™re looking for some colorful super hero costumes and accessories or a quick, cheap build, this set does the trick, otherwise skip it. Iâ€™m sure it would make a great gift for younger children, though.