2008 was an interesting year for Star Wars fans. The Force Unleashed was taking the property into new yet familiar territory making use of the latest technology and the Clone Wars series hit the airwaves after a big screen premier, proving again there would be an audience for any iteration of the franchise across any medium. LEGO doing what they do best, ran with it. Almost all of the sets that year were based on either the Expanded Universe or The Clone Wars. Of the many unique ships and play sets that came out that year, this was one of them.

In retrospect, I really enjoyed several of those sets as it was the year I started to really get back into building after nearly a decade of toiling in my dim age building the occasional set, but not creating anything of my own. That Christmas I received a half-dozen of the larger sets from that year, all of them had two things: 1) lots of bricks and plates and 2) unique (at the time) minifigures. This set had neither.

You can sum this set up in 3 words: Glorified Battle Pack. It seems to tip the scale in the number of pieces, but in reality 82 of those 249 parts are chain links so when you open the box you can’t help but be a little disappointed. To put it in perspective, here’s the entire content of the box easily confined to the size of a battle pack box. With room to spare no less. A prime example of the outcry for LEGO to reduce their box sizes. 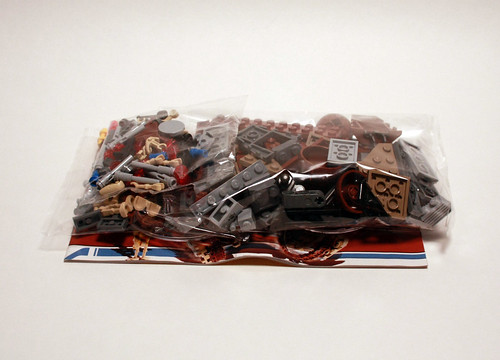 Packaging aside this set falls into the battle pack category for another reason. It’s just a bunch of droids and all in minfig scale. Let’s get down to business. 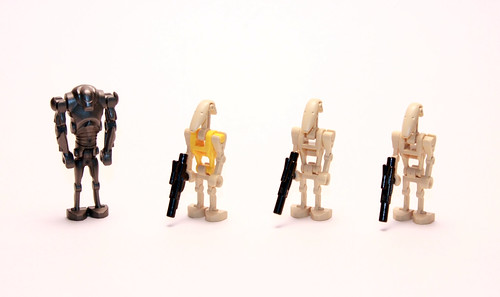 First up are the minifigures, all droids and nothing new. Two standard battle droids and one commander with a super battle droid thrown in to mix things up, at least a little. The battle droids all come with the standard large blaster and the SBD is as always, skinny and awkward looking. I will say that I prefer when the rank distinction on the battle droids is a completely different coloured torso instead of printed markings.

Now on to the meat of the set, except there isn’t any really. It’s just more droids. 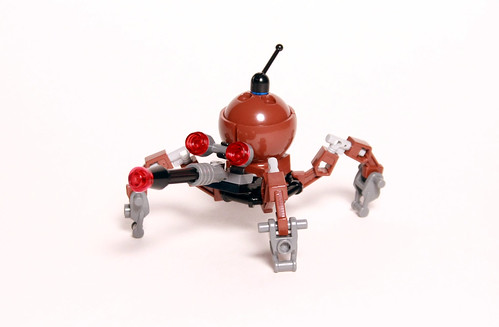 First up the, the smaller of the two the Spider Droid. It eats up about 30 parts from the sets total and is a simple but interesting build. For me the parts are the high point of this set and IMO it’s a huge plus. This little guy is basically a pile of brown and bley greebles. I may be a big Sci-Fi nut, but I’m also a huge fan of one subgenre: Steampunk. This set might as well have come with a huge Steam Society seal of approval on the box as nearly every fiddly little bit is perfect for any number of Steampunk creations. As for the look of the droid, it’s fairly well spot on. I think you’d be hard pressed to design a better one at the same scale. In the playability department it’s pretty basic. The legs don’t pose as easily as you would think and other than the gun/nose’s up and down motion they’re the only real play feature. 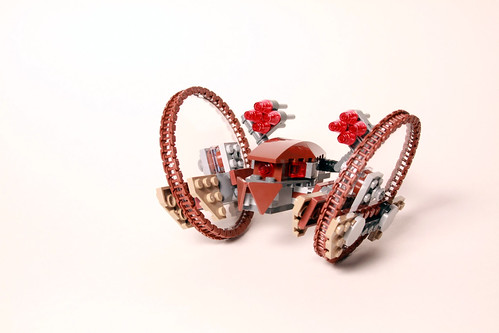 Lastly we have the Hailfire Droid, I’ll admit that one of the things that drew me back to LEGO years ago was the Star Wars Technic sets and I loved the Technic version of this droid when it first came out. The play features are a little better on this one, with adjustable missile racks, wheels that tilt and spin (better on carpet than smooth surfaces) and a reasonably impressive ability to balance itself. Once again the standout feature here is the parts, the brown chains and large transparent dishes were enough to ensure I picked up two once the set went on sale. Let’s not forget the weapons though! If you like flick-fire missiles, you’re in luck! I’d bet this little set is tied for most missiles in a set if you’re into that kind of thing, which I’m not. They do have their uses though. As for accuracy, it’s a little under scale so that hurts the overall look for a couple of reasons like shaping and the number of missiles cut down to a quarter. If they had increased the size of the droid to scale with the minifigs it may have made the set appear to be worth the price, but we would have most likely lost the sweet chains and dishes and the price most like would have risen. 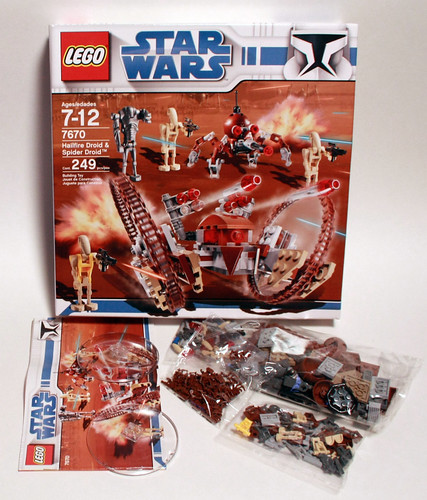 Looking at the price for a second $19.99 isn’t bad considering if you wanted to just pick up those two awesome parts on Bricklink, they’d cost you more than half the price of the set. So if you manage to stumble on one for MSRP or lower SNAP IT UP!

Verdict: I enjoyed this set if for no other reason the multitude of cool parts and colour scheme. As a parts pack this was a great set, particularly on sale. For those looking for a set with more substance and playability, you’ll probably end up disappointed.