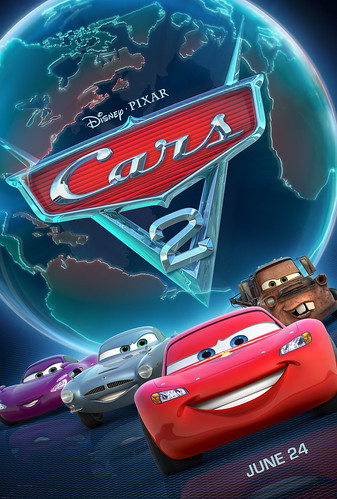 Despite my apprehension at how much I would dislike this movie, I forced myself to go see it today so that I’d have a better frame of reference for the LEGO Cars sets that’s currently in my review queue. Everything I’ve seen and read about it lead me to believe that the plot would be more Mater-centric than Lightning McQueen and the prospect of sitting through more dumb jokes from Larry the Cable Guy did not appeal to me in the least.

Before I dive into my review of the film, I want to preface it by saying that I am a huge fan of everything Pixar had to offer ever since I saw the famous Luxo short in my 3D Modeling class at UCLA many years ago. Every single movie has been enjoyable with (mostly) original stories. My top 3 in no particular order would have to be Toy Story 3, The Incredibles, and Up. The first Cars movie is probably one of the least favored offerings by most critics and friends alike. Tohst from our chat room put it best in that the major flaw of Cars is that the main character isn’t very likable. That characterization is true in a lot of ways but I think one of the redeeming qualities of the first movie was the point where Lightning was able to embrace Radiator Springs and its civilians for who they are and what they had to offer. His paint job from racing deco to his “cruising” deco was more than just a face lift, it signified the transformation of his character. Lightning’s ability to mature and change his viewpoint is what made me like Cars. It may not be Pixar’s best movie but I enjoyed it for several reasons. Cars 2 however left a lot to be desired.

What I liked: The racing cars. So many cool designs and shapes that are achievable in LEGO form. Though I haven’t yet reviewed my copy of 8679 Tokyo International Circuit, it’s the one I’m chomping at the bit to open for one reason and one reason only: Shu Todoroki. Below is a side-by-side of LEGO’s rendition of Shu from the set and a rendering of Shu from the movie:

Granted it’s not 100% accurate, and what I wouldn’t give for some more racing decals, but I think LEGO did a fantastic job of recreating Shu. So many other cars can be done the same way. The possibilities are just mind blowing. And I really hope that LEGO does more Cars sets so we can get more of these little gems. Here’s a few more racing caracters (get it? CARacters? see what I did there?) that I’d love to see in LEGO form: 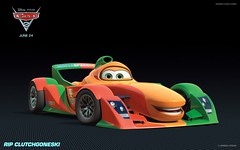 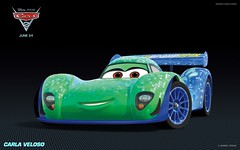 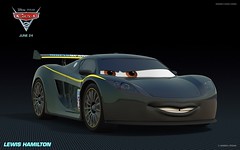 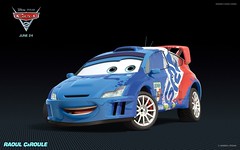 My favorite parts of the movie were actually the racing sequences. The plot of the movie is that an oil tycoon turned green energy advocate, Miles Axlerod, is hosting the World Grand Prix to prove that alternative energy is the future. The WGP is a series of three races in three different locations around the world with parts of each circuit featuring different racing surfaces. The parts that benefit Formula 1 style racing and NASCAR style racing seem the same to me, but what do I know, I’m not a race car driver. But there was also dirt courses for rally racing. The point of me telling you all this is that the cars racing in the World Grand Prix are all based on real life racing cars and in some cases real life drivers. From Le Mans to Rally to Formula 1 to NASCAR, it seems that every type of racing genre is well represented in the movie. When the race kicks off in Tokyo, you’re treated to a few minutes of some fantastic cinematography and sound engineering that gives the viewer a real sense of speed and excitement.

Another racing sequence that made me smile was the final race-for-fun at Radiator Springs at the end of the movie. You have all the pavement racers on the road and the lone Rally car, Raoul ÇaRoule, racing through the dirt catching air off a hill, each car racing on the terrain it liked best. It was a simple sequence but the fun that the race cars were having really showed through. 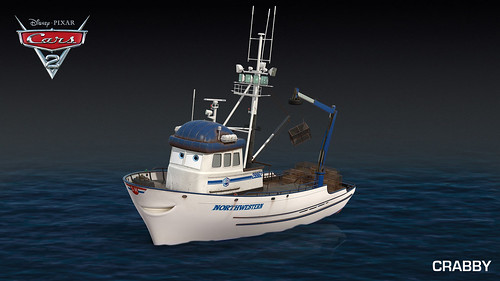 And lastly, Sig Hansen of Deadliest Catch fame as Crabby was a nice treat. When I saw the word “Northwestern” on the side of the boat, I immediately recognized it and the voice of Captain Sig. And, really, who wouldn’t want to see a LEGO set of Crabby?

What I didn’t like: Unlike the first movie, there is no such journey of inner discovery and/or maturity occurring in Cars 2. Instead, what we get is a typical outcast-turned-accidental-hero story that is barely interesting enough to keep your brain engaged. The story is indeed Mater-centric in that he is the accidental hero that saves the day and inexplicably gets the girl. I would have to say that every second or third scene you’re either treated to or tortured with, depending on your affinity for Mater, another one of his hijinks or lame jokes that only an 8-year-old would enjoy. And I totally understand why the movie was written this way. Disney’s had a fairly successful run of short cartoons based on Mater on the ABC Kids and various flavors of the Disney Channel. I wouldn’t be at all surprised if in fact it was Disney that tightly controlled the creative direction of the sequel to capitalize on his popularity. And, kids, this is why marketing should never EVER control the creative process because the end product feels so distant from the quality that Pixar is known for, it felt more like a Dreamworks picture. Yeah, I went there.

It doesn’t seem like there wasn’t a lot to not like about the movie, since I wax poetic about the things I did like. Aside from the LEGO set possibilities swirling in my mind, the racing sequences and the voice cameo of Sig, there wasn’t much else for me to enjoy so I just leaned back in my chair and watched the movie for what it was without expecting any depth to the story. There were a few clever things that made me laugh but overall, the parts I really liked were few and far between.

Verdict: Great for kids, not so much for adults. If you’re a Pixar BD or DVD collector, try and get it on sale.

Update 08/21/2011: After I published the review, I reread it and thought about the movie some more and I feel like the following needed to be added.

There is a fair amount of violence in the movie. There was a torture scene and scenes of gang violence that made me feel uncomfortable to watch. Had the characters been human, I’m not so sure it would have been rated G. The two-on-one bathroom fight is reminiscent of schoolyard bullying which is far too common in schools today and in my opinion not be something put up on the silver screen for entertainment, especially not in this type of movie. But since the characters were cars, that made it okay? The could have completely removed that sequence, showed the Rod Redline getting captured by some other means, and it wouldn’t have changed the movie in any way except making it better by removing the beat up scene. It may not phase most people, but I was a little shocked by those scenes. Sure there’s gunfire and in the name of cops and robbers, it seemed innocent enough since no one got their head blown off but the beatings and torture seemed a little too much. Call me sensitive, but I know I’m not the only one that feels this way. Human or not, these are characters we’re supposed to find a bond with. Torture and gang violence has no place in a family-friendly animated movie.

That’s all I wanted to add.