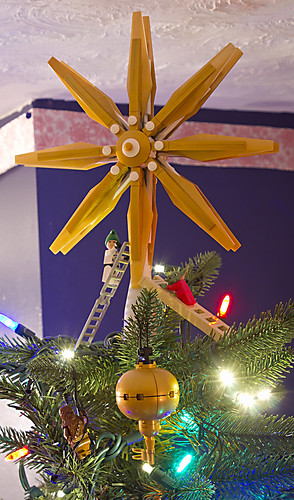 Well now you’ve decorated your tree. As you stand there basking in the glory of all the ornaments you built, you start to think that perhaps the angel that’s been in your family for the last five generations just isn’t going to cut it this year amongst all the beautiful ABS that adorns your tree. Maybe it’s time to build your own tree topper out of LEGO and that’s where I found myself three years ago.

I’ve never been one much for angels as tree toppers, but I’ve always loved stars. Even though, the one my wife and I bought our first Christmas together had lost its luster and we were ready for something new. Everything I saw in stores was ‘meh’ at best and then my wife suggested I build one with LEGO. Challenge accepted! The first year I went for something more classic and it was a big hit with everyone, so it was decided (by my wife) that it would be a yearly occurrence. Last year I found myself under the gun and hastily threw together my gaudy Death Star topper that was influenced by the flashy Death Stars from Futurama: Bender’s Big Score. I was happy with the garish attempt regardless of the rush job.

The plan for this year was to make a dragon, inspired by Smaug, perched atop the tree with a long tail that wound down around the tree like garland. I wanted it to be red with a golden underbelly, but as the time approached I was disinterested with doing it this year. In part due to not enjoying the first Hobbit movie, but mostly due to it being the 50th anniversary of Doctor Who. The idea of a TARDIS on top of the tree was a big hit with the family and away I went. I had to make some creative sacrifices to ensure sturdiness and I didn’t have certain parts in blue, but I’m still pleased with the results. I picked up a string of LED lights that had a “phasing” (actual setting on the battery box) feature and threw on some much needed decals against my purist urges.

I wanted to share these because in making them, I have had more then a few other people mention that they’ve done the same thing and yet, I haven’t seen any pictures. So let’s see them people. Let your geek flag fly and trick out the tops of your trees with some wicked LEGO creations. Your friends and family already think you’re crazy anyway.