At LEGO’s social media event late last week, they had a Roller Coaster set on display fully motorized with Power Functions motors. I gotta say, I was mesmerized. I spent a good amount of time just watching the trains go up and around and down over and over again.

Of course, the hilarious thing about my video is that train gets stuck.

I hadn’t bought one yet so I appreciated it being there for me to play with and so I shot a couple of extra clips of features that aren’t made obvious in still photos.

You pull this lever and slide some tracks to replace cars. The movement is pretty stiff but smooth enough to be move cars in and out of service. A similar lever pulls out stopper to stop the train for you to board and deboard minifigs.

Universal Joints Are A Wonderful Thing

The Motors (And Axles) Behind The Curtain

It’s interesting that the battery box placement is all the way in the back. It makes turning it on and off a bit of a chore as you’ll have to reach around or through the model to hit the switch. It’s kind of the same as the Ferris Wheel but the Ferris Wheel itself sits high and reaching around isn’t as challenging. There is probably a way to move the battery box in a more easily accessible spot though given the right length of wire.

You definitely NEED to get the motors and battery box. Because cranking the cars up the track by hand is going to get old real fast. I called LEGO Shop@Home and they said these are the Power Functions items you’ll need at a minimum to motorize and automate the Roller Coaster:

You can take it a step further and get the rechargeable battery pack ($49.99) but you’ll need to get the 10v transformer ($29.99) to charge it up too which adds significant cost.

Now, what’s interesting is that there is also LEGO BOOST compatibility. It says so right on the product page:

I’m pretty sure LEGO Boost was not part of the demo model at the event, as there was no paired iPad and I did not hear any “realistic sound effects”. You can control the chain lift and tap some buttons for sounds. It’s a high cost for little return but if you already have LEGO BOOST then great, but I wouldn’t pick that up just to get some sound effects for your Coaster set.

Get the motor and battery at a minimum. It should have already come with included as it really is necessary to enjoy the model without cranking your life away. Once you get the thing running though, you won’t want to turn it off. 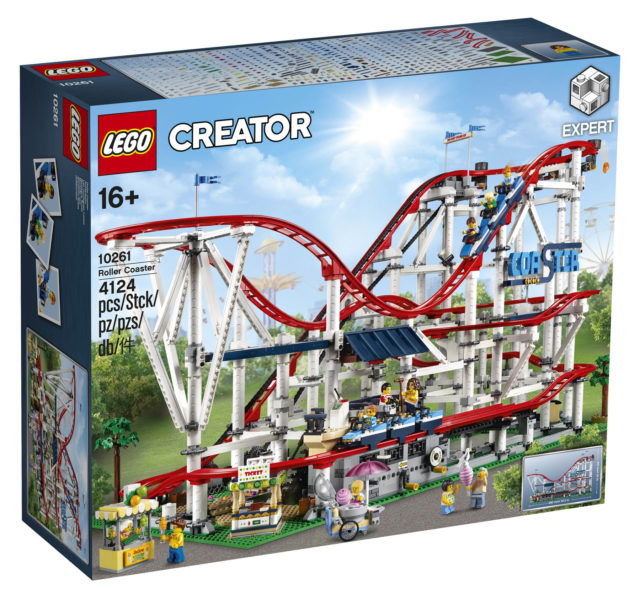