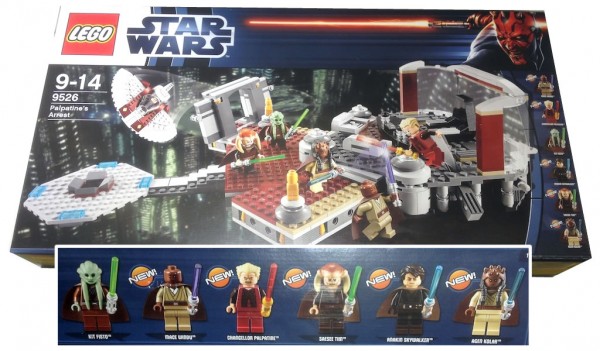 9526 Palpatine’s Arrest has been found at the Hamburg, Germany LEGO Store. Fans have been waiting to see this set since it was listed on an official LEGO poll several years ago.

It’s priced at â‚¬89.99, and includes new movie versions of Kit Fisto, Mace Windu, Chancellor Palpatine, Saesee Tiin, Agen Kolar Anakin Skywalker. Looks like there’s a catapult to launch Palpatine at the Jedi, and there appears to be a lever for exploding-window action. No Sith wall mural, but fan predictions proved mostly accurate.

Considering we haven’t gotten official pictures yet, I’d reckon this is an accidental early release. It was slated for August 2012, and is rumored to be a retailer exclusive.