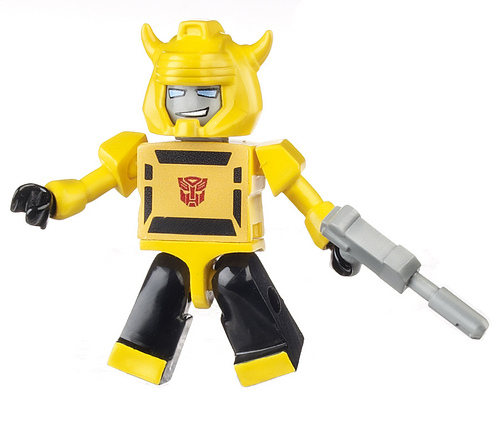 You might have heard by now. There’s a new line of toys preparing to transform and roll out to construction toy aisles from #2 US toy maker Hasbro. The line is called Kre-O, and it’s debut theme is Transformers.

At the American International Toy Fair this weekend in New York, Hasbro debuted their new line of brick-based building sets. Although security was pretty heavy in Hasbro’s venue for the press event, extra care was given to Kre-O: segregated from the rest of Hasbro’s offerings, surrounded by security guards and behind an extra set of doors and with strict no photography rules (the exception being one media outlet given the chance to shoot some exclusive video) Ace and I got to spend a good half hour with the first wave of sets that will launch this fall.

While Ace launched salvo after salvo of questions at one representative, I spent the majority of my time poring over the sets on display. You’ve probably seen the shots of the sets for Optimus, BumbleBee, and Starscream. 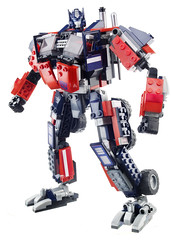 In Hasbro’s ideal PR world, they would love to talk your ear off about the innovative new product line for boys and how it stands on its own as a creative new construction line, without ever dropping the word “Lego.” Hence, the elephant in the room. Since Hasbro decided to slap shiny gold stickers on their Kre-O boxes emblazoned with “Compatible with most leading brands!”, I’m just going to dive into the comparisons headfirst.

At first glance, these look like really awesome Lego models. I can honestly say I was impressed when I first glimpsed the imposing Optimus Prime robot mode. It reminded me at least superficially of some of the Transformers creations I’ve seen from Lego fans. And I think that’s what Hasbro is banking on: line the shelves with box art that shows off stunning, seemingly transformable toys based on a ludicrously popular franchise, and rake in the dough.

And that’s when things get dicey.

In small print…and I mean small, are those words that no one grabbing these sets off the shelf is going to see:

“NOT A CONVERTING TOY”

Like I said, at first glance I saw what I thought was a Transformers building toy that would change from robot mode to vehicle mode and back. The presence of so many hinged pieces and joints seemed to indicate as such, and the giant TRANSFORMERS branding on the box made me think, well, you know. That my new building set would be cool. I want a Starscream model to transform! 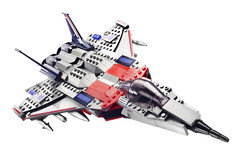 In other, not-much-bigger writing, the box art quietly informs you that you can use the included instructions to build either the robot mode or the vehicle mode. Huh. Well, that’s okay.. maybe? I guess? Maybe I just want to show Optimus in his robot mode. Two months down the line, I decide maybe he would look better in vehicle mode. So I take the whole model apart, all 500+ pieces of it, and rebuild it in truck form. A week goes by, I decide robot mode was better. Repeat the process.

Wouldn’t that get tedious?

The regular Transformers figures transform quickly: most in seconds, a few in minutes. That’s the appeal our beloved “Robots in Disguise”: instantly convert from robot to vehicle to robot and back. But that’s not what you get with Kre-O. It’s not what you got with their previous building line attempt, “Built to Rule,” either.

“What about the parts quality?” you ask. “I don’t care if my Transformer doesn’t transform, I just want to know if it has cool pieces that will hold together well!”

I can’t speak to the clutch power of the new Kre-O line, since the sets we saw were glued, but I could see and touch the parts, and you can find the damning reviews of the BTR sets on Amazon and various TFormer and GI Joe fansites. Many of those reviews complained about a lack of clutch power. As for the plastic quality of the pieces, you can see it in these promo images. Some parts are waxy, and translucent in a few cases. The colors are swirly in many of the pieces, you know that marbled look. I had these same observations at the Toy Fair booth. You can look at the high res Optimus photo to really take it all in.

After you take that closer look, you’ll notice some familar parts. Or remixed versions of familiar parts. The 4×6 car hood slope, but split into left and right halves. 1×1 cheese slopes with grilles. 1×2 grille tiles with extra grilles going the opposite direction. There are some freaking great pieces in these sets but there are also familiar parts, and some outright clones. I don’t know when it became okay to just straight up copy the pieces made by other building toy companies, but Hasbro seems to think it’s not a problem. 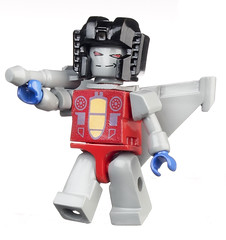 They also have cute little minifig-esque characters called Kreons (yes.. Kreons, sounds like Crayons) based on the G1 Transformers characters that have attachment points on their arms and legs for things like wheels and guns. These will be a big selling point for older fans, no doubt.

Let me temper this initial impression of Kre-O by saying yes, I’m biased. I volunteer at a Lego fan website, and you know what my day job is. I handle Lego bricks all day long. I spent so much time checking out these Hasbro sets the other day because I want to like them. I really do. I LOVE Transformers. I would be thrilled to have a Lego Transformers line. Unfortunately that can’t happen, and Hasbro, bless their hearts, are giving it what appears to be a sincere attempt. They’re promising Kre-O sets based on other popular franchises, so we could be seeing GI Joe and Marvel-based sets if this first wave proves successful. Will Kre-O be a legitimate threat to Lego’s staggering billion dollar US sales or will it disappear as quickly as Built to Rule and countless other clones? “One shall stand and one shall fall” and all that jazz? We’ll see. Let’s just say I don’t think you should be making plans to visit Kre-O-Land with your family anytime soon. 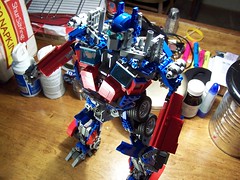 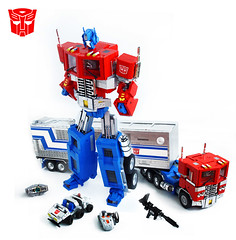