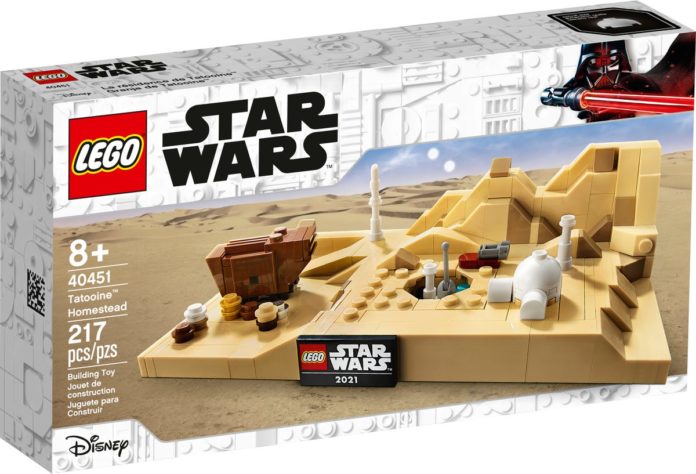 The title pretty much says it all, but you can celebrate by shopping May The Fourth promos on May the Fifth. It seems they have plenty of the GWP, 40451 Tatooine Homestead, in stock as they are still automatically added to your cart with a LEGO Star Wars purchase of $85 or more. So either nobody is buying anything or they prepped properly and have a metric ton of these things laying around. 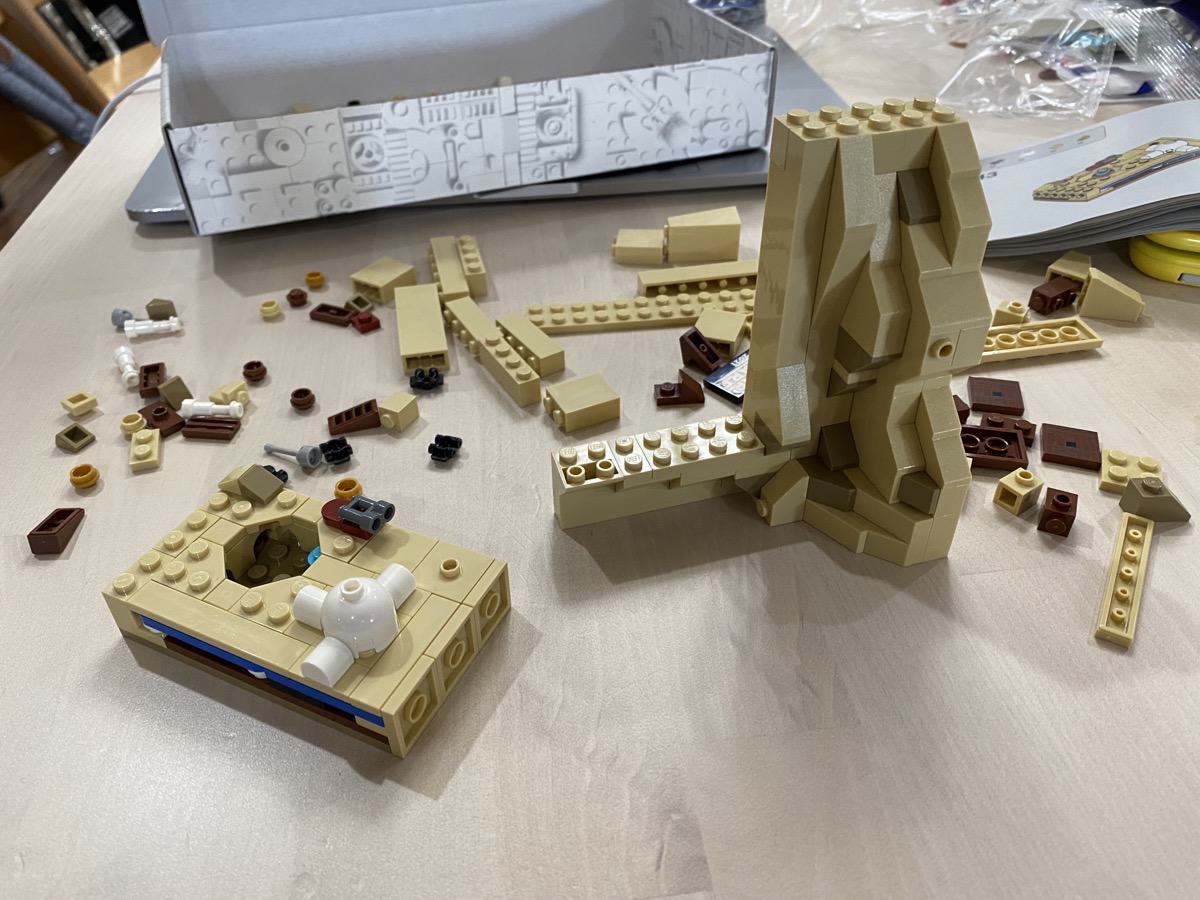 Anyways, if you’ve gotten the other similar microbuilds from previous promotions, then nothing should really come as a surprise here. This scene will fit right in alongside any others you may have or even by itself. I never built any of the previous ones so I don’t know if this build technique is new to this set or standard operating procedure, but you build a portion of the landscape vertically, build the homestead separately, and then attach it sideways. It’s pretty neat and this gave the homestead the necessary depth to create the living quarters pit. 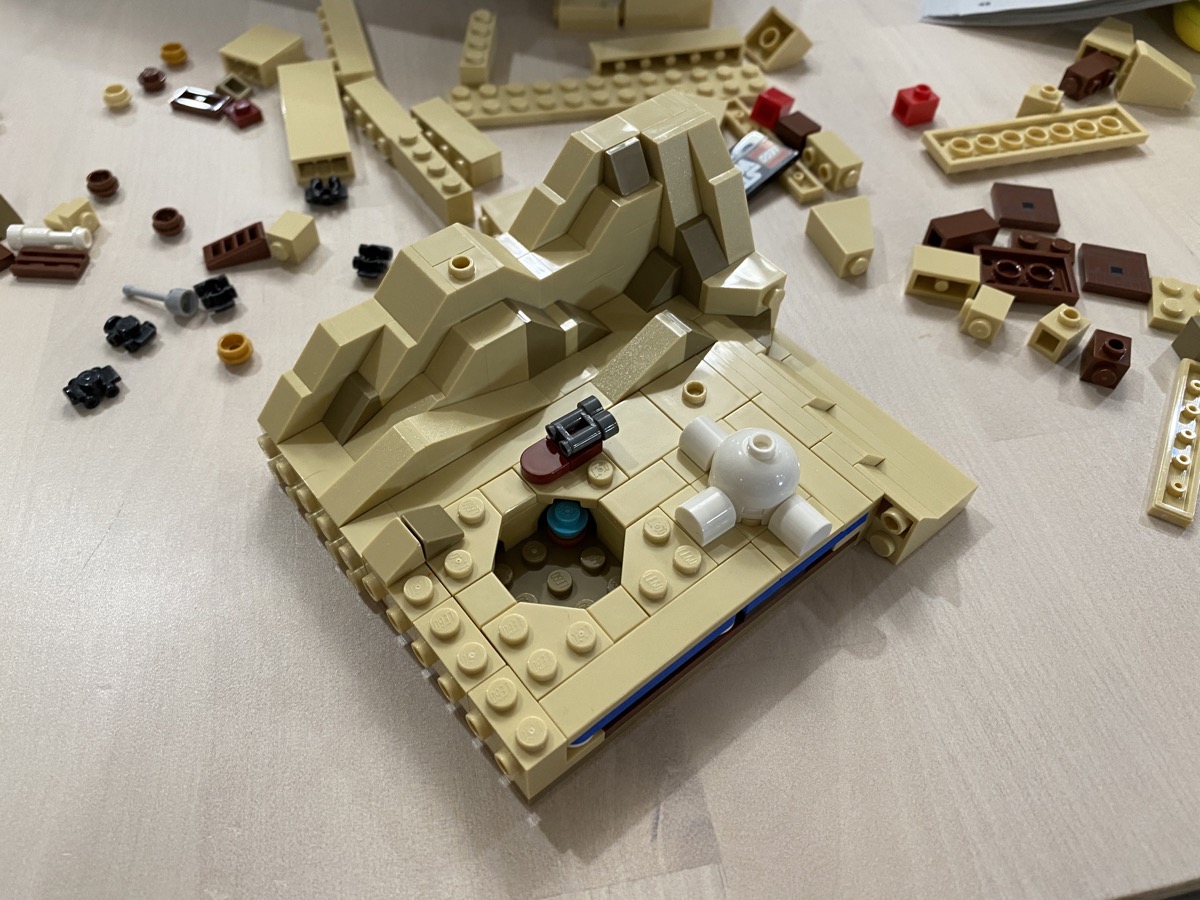 It recreates the famous purchase of the droids scene from A New Hope. It comes with representations of Uncle Owen, a Jawa, C-3PO, Luke, R2-D2, and some other character that a dark brown stud represents, could be another Jawa or droid. No R4-D5 unfortunately. 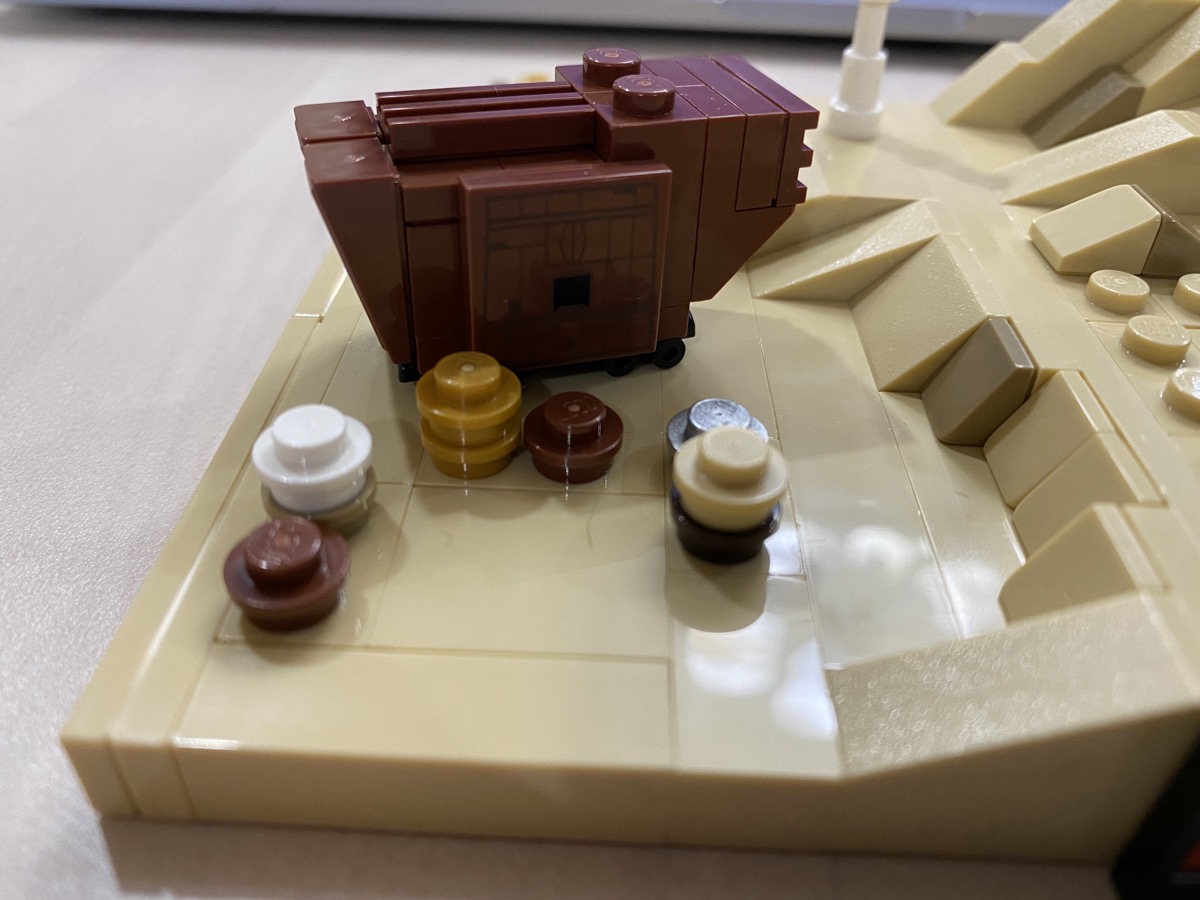 The micro Sandcrawler is just really nice. The printed tiles does wonders to add detail to the behemoth. Both tiles are exactly the same even though the design isn’t symmetrical but no big deal. I’m just surprised that we got something like that in this set.

The other nice thing about this display set is that there is a stud for the Sandcrawler to attach to. It would have been annoying to have it just loose and unattached. It makes the set convenient to pick up and move around without having the Sandcrawler slide around and fall off. 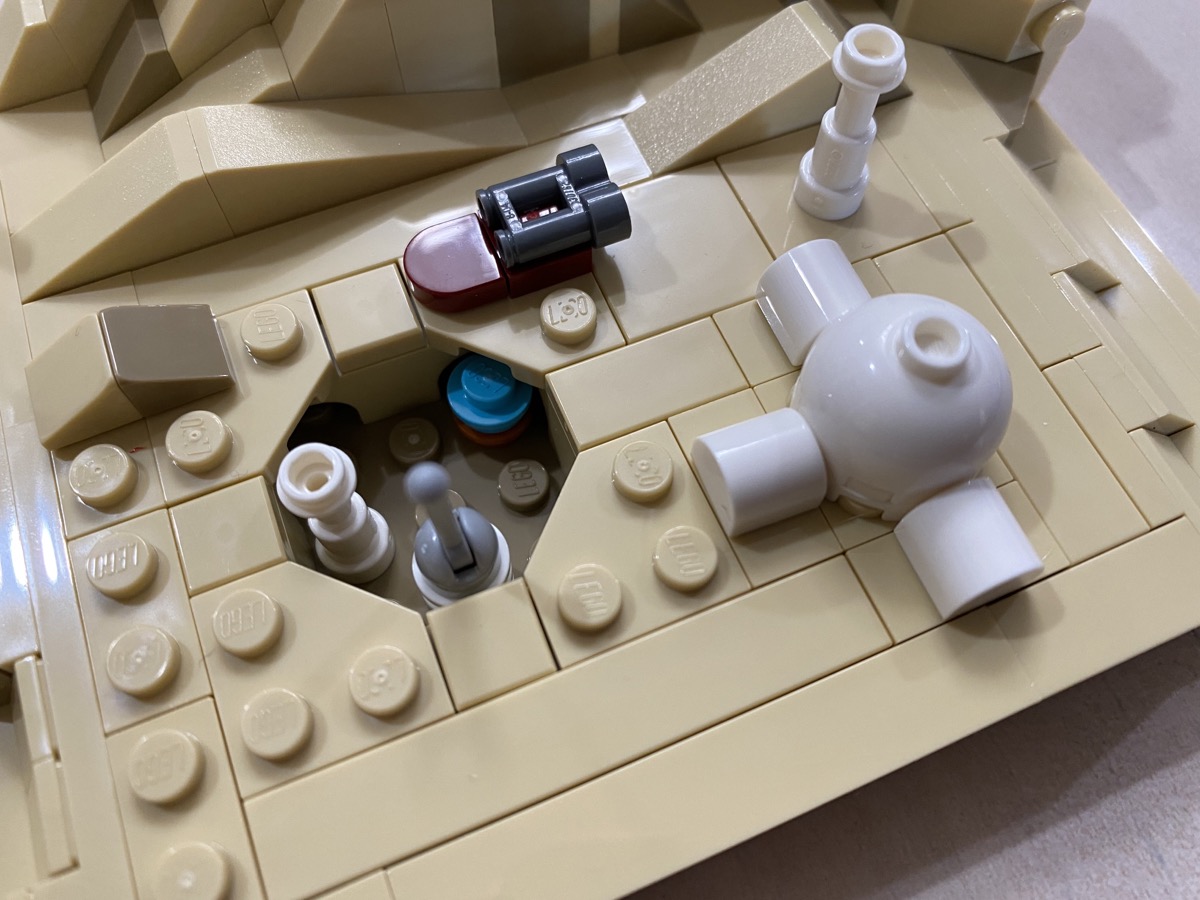 The actual homestead is pretty nicely detailed. Luke’s Landspeeder is as efficient as it gets constructed by three elements. Unfortunately it relies on the studs from the landscape to keep the three pieces together. So in terms of looks, it’s tops, but functionally it fails. 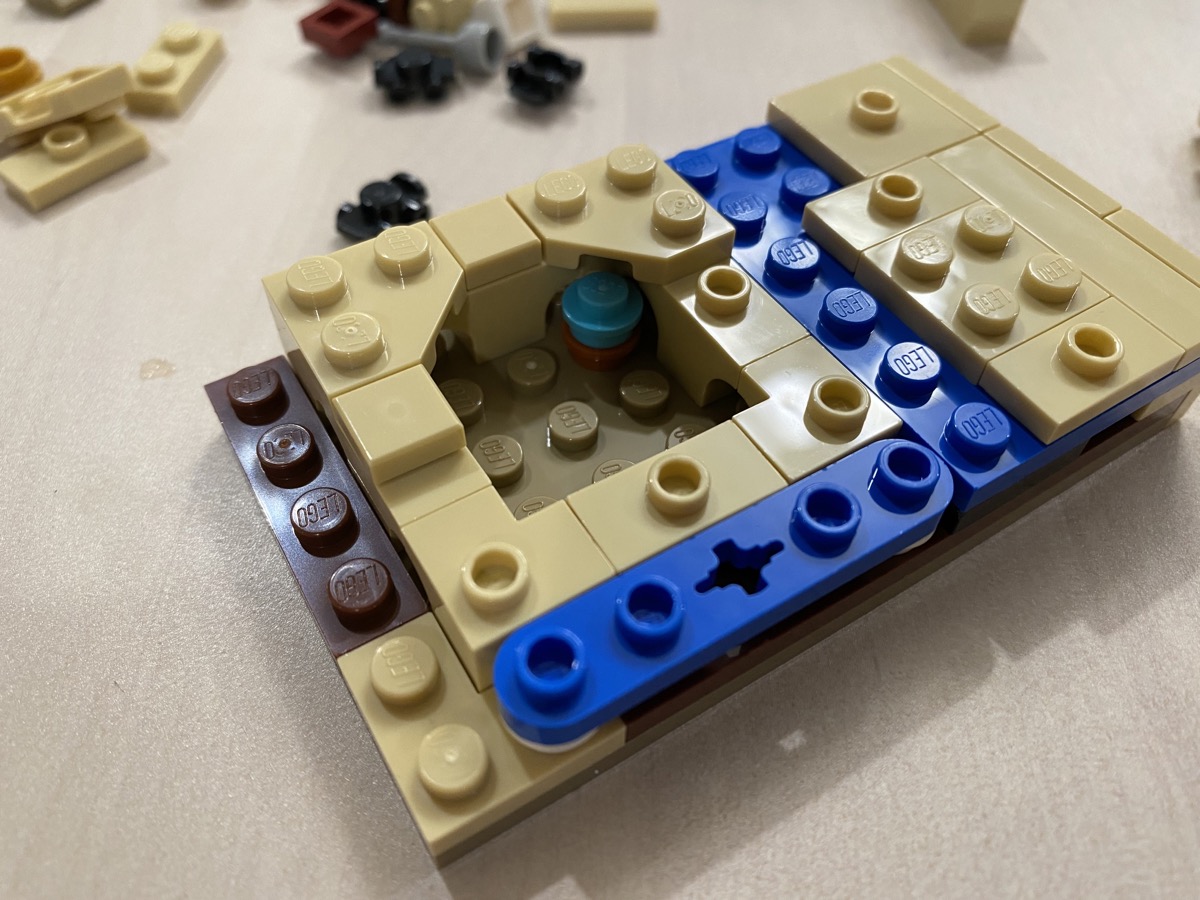 There is the pit that goes down to the living area and lo and behold there is a representation of Beru Lars! We may not ever get a minifigure of her in a set, but at least we get two studs in a microbuild, that’s something at least.

Overall, I’d give this thing 4 out of 5 stars. It’s complete in its execution of a concept, and even includes Beru, something the UCS Sandcrawler set failed to do and the main reason why I didn’t give it the last star in my review. In fact, I’ll take that last star I withheld and give it to this set, bumping it up to 5 out of 5 stars. It’s a free item right now and given that they just released a new UCS R2-D2 model, it makes acquiring one pretty simple if you were going to buy R2 anyway.

For the record, LEGO.com provided a copy of the set for me but that had absolutely no bearing on the score. Believe me, if they sent me something that sucked, I’d say so.

The Moving Christmas Tree Promo GWP Is Totally Worth It