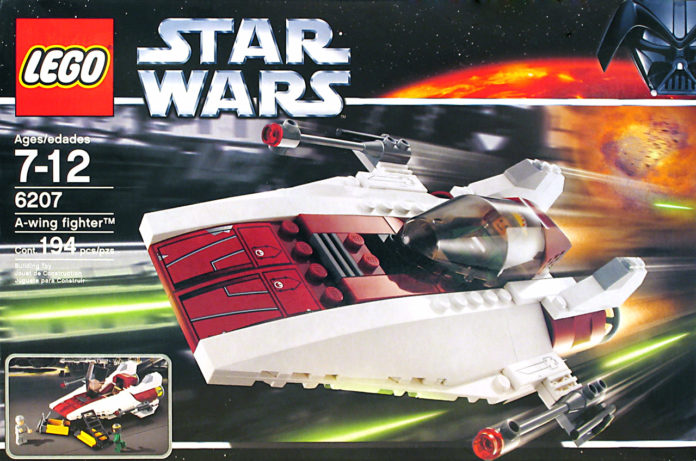 I don’t know what it is about the A-wing fighter that draws so much adoration and attention from yours truly. It’s not on screen for very long, doesn’t have any fancy opening wings or rotating cockpits, and the only thing anyone ever remembers about it is that one crashed into the bridge of the Super Star Destroyer Executor, in turn causing it to crash into the Death Star II. Maybe it’s the coloring of the ship, or it’s stubby shape, or maybe even the inadvertent Kamikaze-like nature of the one and only memorable scene, but I really liked the first A-wing fighter set. The redesigned 6207 set is leagues above that chunky model and surely does not disappoint. 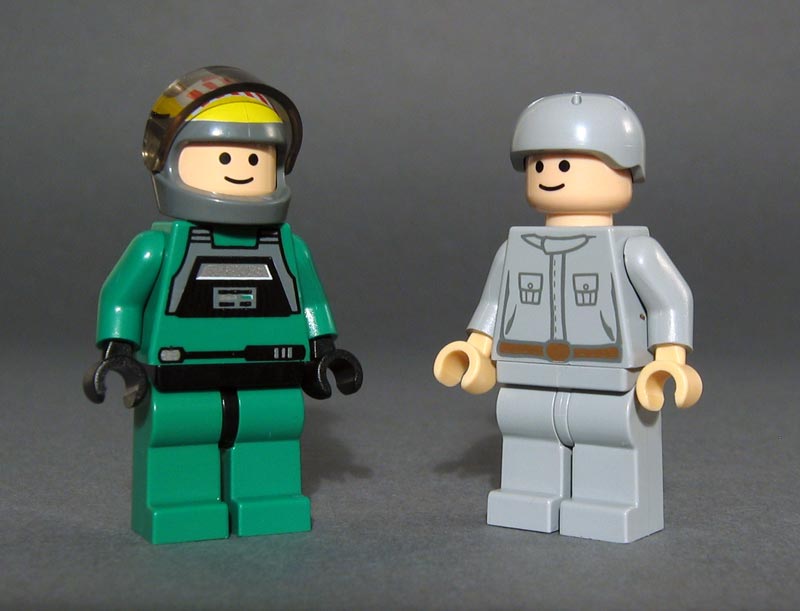 Starting with the minifigs, you get a green A-wing pilot and a Rebel Technician. The helmet design on the pilot hasn’t changed at all which is great; it was one of the best details in the first rendition of the A-wing fighter. Whenever he’s not on duty carting ladder’s around, the Rebel Technician’s grey helmet doubles as a safety helmet for when he’s at the half-pipe. The minifigs are peach, which, to be honest, are growing on me. One major change in the pilot’s head from the previous A-wing is that he has lost his helmet mic pattern and instead is just a plain ol’ smiley face. 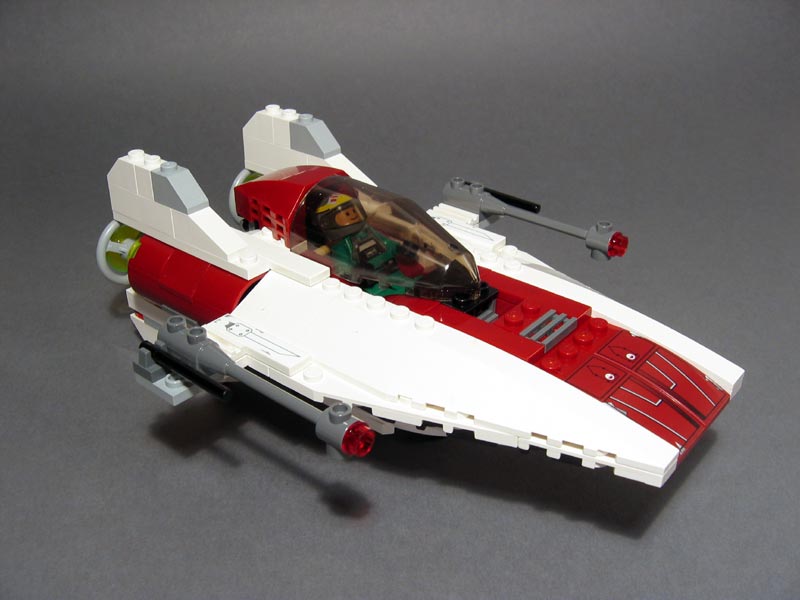 Moving right along, the first thing that grabs you about the A-wing is just how accurate the shape and color of the A-wing is. It’s now white and dark red instead of grey and regular red. 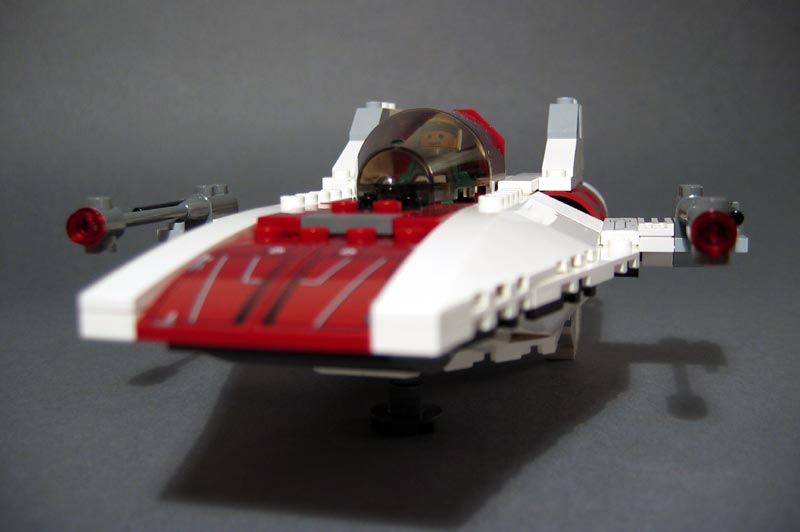 The long curved slope elements really come in handy in giving the ship a sleeker look. The vertically rotating guns on the sides of the ship are practically identical save for two round transparent red studs stuck the end of the cannons. 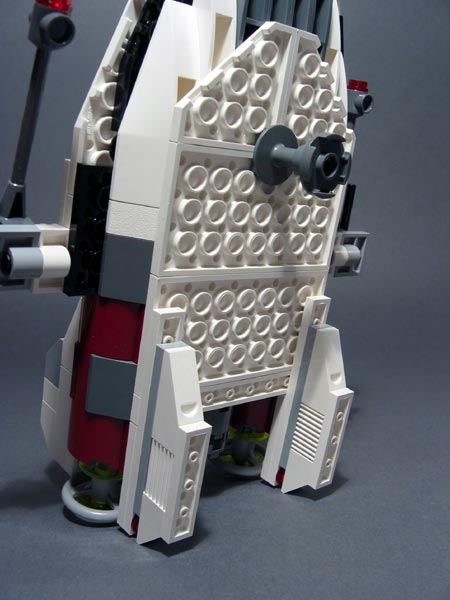 The bottom of the ship hasn’t changed much, a single landing gear near the front and the bottom half of the rear tail fins stabilize the craft while it’s landed. 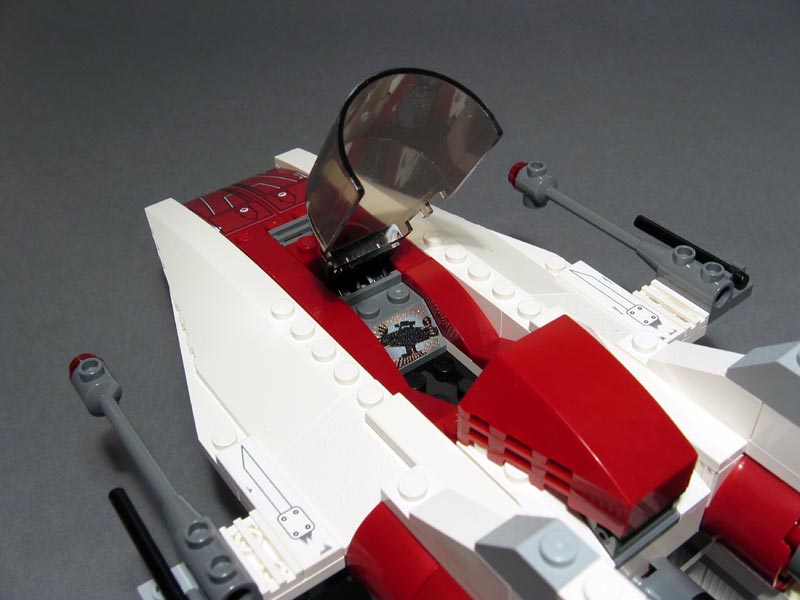 The cockpit canopy received a slight upgrade and is now in transparent smoke, instead of the clear plastic that the previous version had. It really adds to the “cool” factor, I think. It still swings forward when opened exposing a printed brick of none other than a star destroyer’s bridge. The pilot, yet again, practically lounges when placed inside, nearly laying down in order to fly the ship. 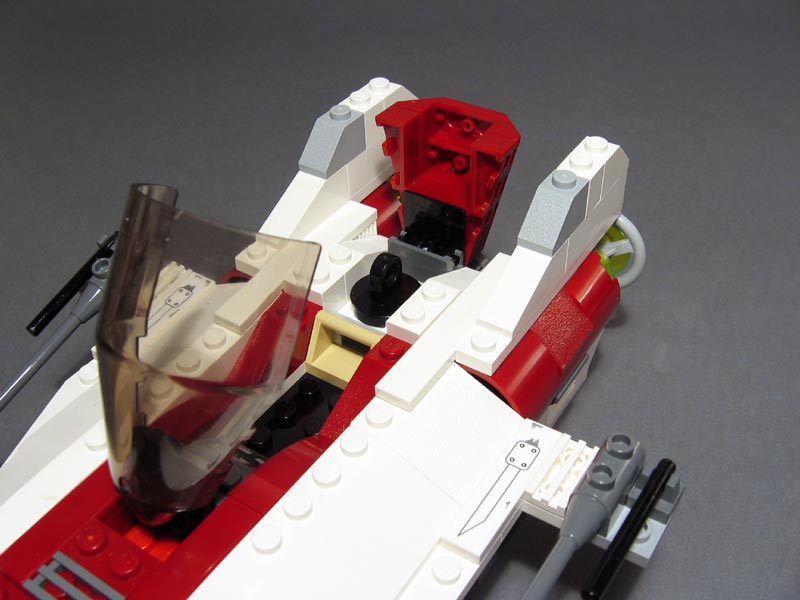 Directly behind the cockpit is a flip-top shell that covers a small storage compartment. 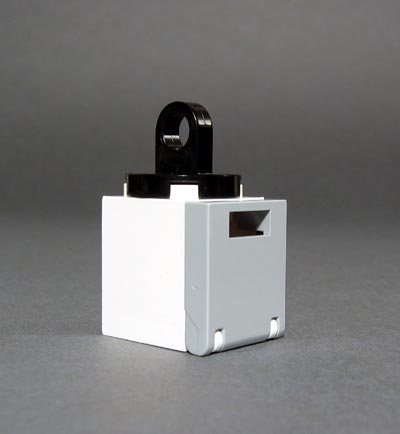 You still get a neat little storage box with the model. Glad to see they didn’t get rid of that.

The back of the ship hasn’t changed too much, but the engines are re-engineered to be a little more accurate. There’s a 2×2 round brick that doesn’t seem to do much but sit there and look pretty and take up space, but maybe it was done to break up the space a little.

The ladder cart is actually the first thing you build, but it’s neither very exciting nor pointless. The Rebel Technician actually drives it up to the hull of the A-wing for the pilot to climb on board, but I’m sure when he’s feeling ornery he’ll just hit the accelerator and take off at the most inopportune times. 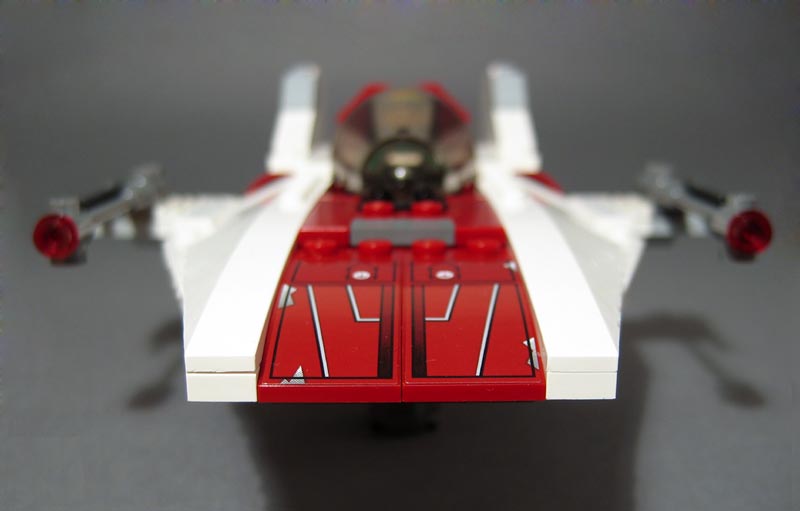 As much as I like this set, there are a two things I wish could have been different. The nose is missing the notch in the center. Because this is LEGO, i’m sure it’s possible to just build my own version that’s much more accurate in this regard, but I wish it was already built that way out of the box. The second gripe I have is one I’ve griped about before: stickers. I loathe the stickers. Although there are only 4 of them, two for the nose and one for each wing, the intrinsic value of the set and the elements themselves would have been higher had they been printed. Granted the stickers are not STAMPs (STickers Across Multiple Pieces), which would have been worse, but I for one enjoy getting new printed elements. Over time, the stickers are going to peel off and/or fade in the light, but a printed element is forever. And it’s a great way to add a little bit of detail to future MOCs.

Despite those two gripes of mine, I really think LEGO hit a home run with this model. At just $15.99 MSRP, it’s only a dollar more expensive than the previous model, you get 70 more elements, and a sleeker, more accurate design. It retains a lot of the same details that made the first model great and yet adds just enough to make the ship even better without sacrificing much of anything else. If you’ve missed out on the first offering, don’t feel like you’re missing out, because you’re really not. This is a fine model to pick up and is way better. I have a copy of the old A-wing in front of me as I write this review; it’s almost laughable how chunky and junior that model is. PIck up a few; you won’t regret it.