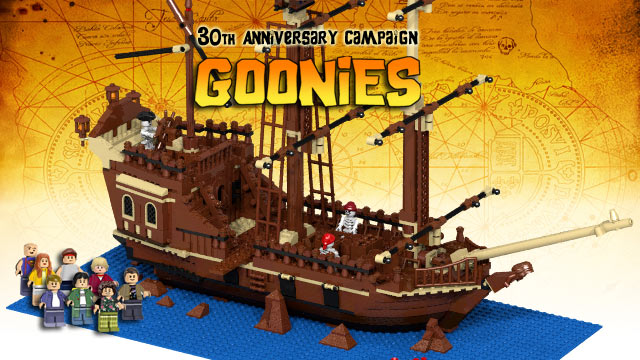 And yet another proposed licensed set has reached the required 10,000 supporters threshold on LEGO Ideas. Ideas user Lyonsblood has created a series of sets to celebrate next year’s 30th anniversary of the film Goonies. He created a whole theme and a series of sets but broke them up into individual projects to better fit the site’s submission guidelines. His most popular set, The Inferno, One Eyed Willy’s pirate ship, has hit the magical threshold.

Not to rain on his parade, but I would be very surprised if this got approved for sale. The size and scope is way larger than any other successful idea-to-shelf project so far. Aside from the ship itself, he is suggesting that the set includes 11 minifigures. I wish Lyonsblood all the luck in the world but I wouldn’t be surprised if this thing got canned right from the get go.