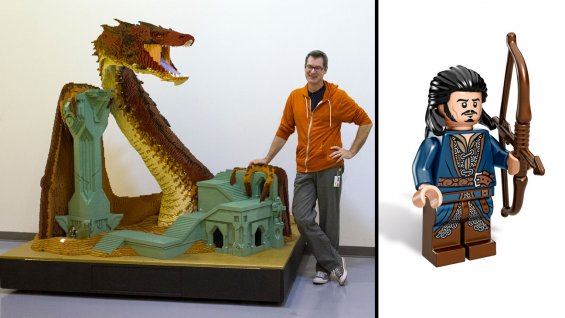 The LEGO Group continues to spread its San Diego Comic Con exclusive news around as this time it’s The Hollywood Reporter getting the scoop on the next Comic Con reveal. Bard the Bowman from The Hobbit franchise is the second of four exclusive minifigs to be given away. As for the other two, the article has this tidbit:

Among the other minifigs at the Con will be the Collector, a character from the upcoming Guardians of the Galaxy, a DC fig and one from The Lego Movie.

We’ve already known about The Collector. The DC fig is most likely a way to promote the upcoming LEGO Batman 3: Beyond Gotham game. Either that or it’ll be a TV series Batman figure to celebrate the 75th anniversary of the character. The LEGO Movie figure is a surprise though and it could actually mean the wrist action Unikitty revealed yesterday is the exclusive. We’ll see if any more news is revealed.

Also of note in the article is the following:

This year, to avoid chaos, the company has a system wherein an attendee’s badge is scanned to determine a “winner” in a lottery-style giveaway.

The Warner Bros. booth will also feature the gigantic Smaug statue pictured above. The statue was designed and built by Erik Varszegi, weighs over 411 lbs and features 83,433 pieces.