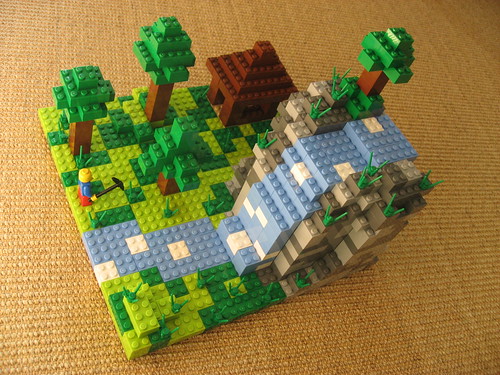 You know that little crowd-sourcing project of LEGO’s, LEGO CUUSOO, where you can vote on the fan submitted creations to hopefully see some of them turn into a real set? Well, the LEGO Minecraft idea has reached the 10,000 vote threshold to be turned into a real set. The official press release below, more pictures on the Minecraft page:

BILLUND, Denmark â€“ A project backed by Minecraft developer Mojang has become the first user-sponsored project to reach the 10,000 vote threshold on the new global version of LEGOÂ® CUUSOO, opening the way for a LEGO set featuring Minecraft to become a reality.

It took the project only 48 hours to gather votes from 10,000 fans of the project from around the world.

â€œWeâ€™re really excited to see the fantastic enthusiasm of the Minecraft community. This is what LEGO CUUSOO is all about, connecting peopleâ€™s passion to the LEGO brick,â€ says Paal Smith-Meyer, Head of the LEGO New Business Group. â€œIt is still too early to say whether a Minecraft play set will become a LEGO product as it still needs to go through a review and approval process to ensure it meets our usual LEGO standards, but it is certainly a lot closer.â€

A go/no-go decision should be reached within the next few weeks. Assuming it is given a â€œgo,â€ then development on any new sets will begin. During this time, LEGO model designers refine the product, while packaging, instructions, and marketing are developed ready for a production run. This will take several months.

LEGO CUUSOO is an idea collection system that asks the Danish toy manufacturersâ€™ consumers to submit and vote for their favourite ideas for new LEGO products. It can be found at https://lego.cuusoo.com . The site is currently in “open beta” and has been well received by fans and niche interest groups eager to see their ideas become official LEGO products.

CUUSOO, which means ‘imagination’ or sometimes â€˜wishâ€™ in Japanese, has been developed with CUUSOO SYSTEM, a subsidiary of Japan-based Elephant Design that has worked with open innovation and crowd sourcing for more than 10 years.

The LEGO Group has worked with CUUSOO since 2008 on a Japanese site that has attracted hundreds of ideas and seen thousands of votes cast by a 35,000-strong community. Now the time has come to test the concept internationally.

The first Japanese product, the Shinkai 6500 submersible, went on sale in Japan in February 2011. The next Japanese LEGO CUUSOO model will be the Hayabusa unmanned spacecraft launched in the first quarter of next year.

On LEGO CUUSOO, ideas that are supported by enough votes will be examined by a LEGO jury that will check that the models meet LEGO standards of safety and playability and support the LEGO brand. Consumers who have their ideas chosen for production will earn 1% of the total net sales of the product.

In the case of the Minecraft project, Mojang and the collaborators have offered the 1% CUUSOO royalty to a charity of Mojang’s choice.