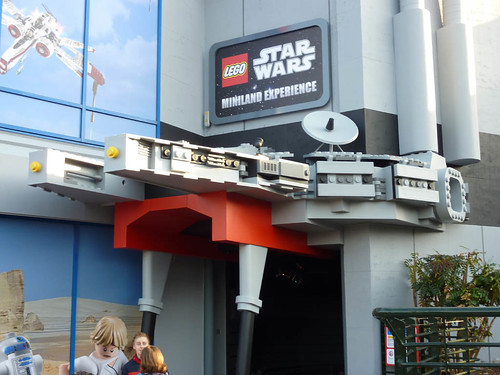 Over the weekend, I was lucky enough to attend the preview event for the brand new Star Wars Miniland Experience at Legoland Windsor, although I was not alone as there were around 50 of us, including people from Brickset, Jedi News and various other online blogs, plus a few competition winners.

We met up in the brand new Legoland Hotel and then made the long walk, gently up hill, towards the main entrance of the park where the new exhibition is housed.Â  The first signs you see of the event are the Star Wars pictures on the building and the half a Millenium Falcon sticking out of the wall.

Unlike the similar exhibits in California and Germany, this is entirely indoors and it consists of 7 areas, covering each Episode and a Clone Wars scene. 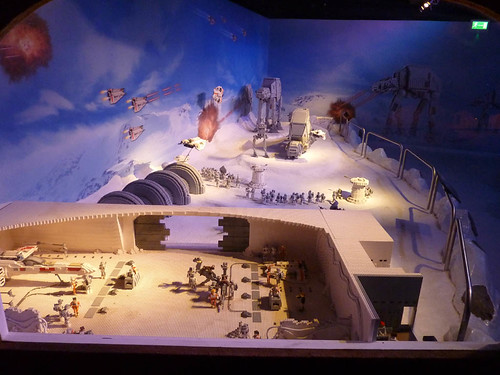 With the models built at miniland scale, they are of a significant size and allows for quite a lot of detail in the models.Â  Each one has at least one button to press which then triggers some animation in the scene together with lights and music to match.Â  This ranges from the fair simple in the Clone Wars scene (lights and recoil on the cannons) to the Tatooine scene which sees the Millenium Falcon rise a few feet in the air, replicating the scene at Docking Bay 94.Â  Speaking of the Tatooine scene, there is a neat feature for the kids here, where there’s a tunnel and a perspex bubble in the middle of the scene, so they can feel really part of the action. 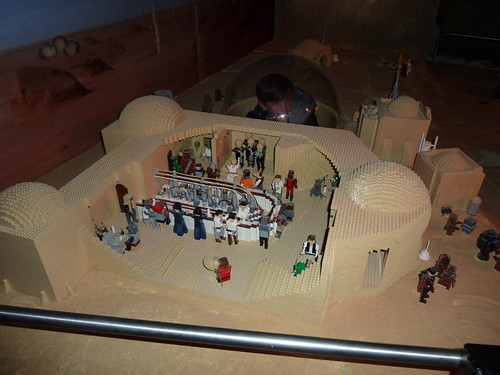 Mind you, whether said child can see anything is another matter … and that brings us onto the only real issue I could find with the exhibit … and that’s the lighting.Â  It’s pretty dark in there, apart from the Hoth Scene and whilst that does add to the atmosphere, you do feel as if you are missing out on the details by it being so very dark!Â  It also doesn’t lead to very good photos … which isn’t ideal, especially since this is what people are likely to want to do.Â  These models are too good just to look at.

Speaking of photos, the ones I managed to take can be found in the FBTB Flickr Stream.Â  There are also excellent galleries over at Brickset.

On exiting the event, you enter and entirely Star Wars themed store, which also features several life sized scale models of Darth Vader, C3P0, R2D2 and Chewbacca.Â  No bargains to be hand, at least not when we were there, but this building also houses the “Last Chance Market” (I think it was called) where they’ll feature sets and merchandise on sale.Â  No idea on deals in there as that bit was closed off when we were there.

Despite the issues, the models on display are very good … with excellent detail and the scenes are instantly recognisable.Â  If you have any interest in Star Wars or just miniland scale building at it’s best, then this is an absolute must see!