I’m working on my review of Pokemon Sword and Pokemon Shield (and have been since it released alongside JEDI: Fallen Order), and it will be coming out within the next week or so. Spoiler alert: I loved it far more than I was expecting to when it came out, and keep trying to convince Ace to give it a try. But that’s content for the review, and this is going to be about the Pokemon Direct that dropped earlier today.

Leading into this, I was convinced that it was just going to be details on Pokemon Home, which is scheduled to release in February and connect the “modern” games (basically anything that can hit Pokemon Bank), Go, Let’s Go, and Sword and Shield. Game Freak had said there were no plans to reimplement the national dex and all the missing Pokemon, and there hadn’t been a peep about DLC or expansions. It was too early for the obligatory remake game to get announced (and hopefully they have sense enough to not give Ultra Sword and Ultra Shield after the fracas that was the Ultra Sun/Moon release), so it should be pretty light.

Okay, wow… I was wrong. So very, very wrong. 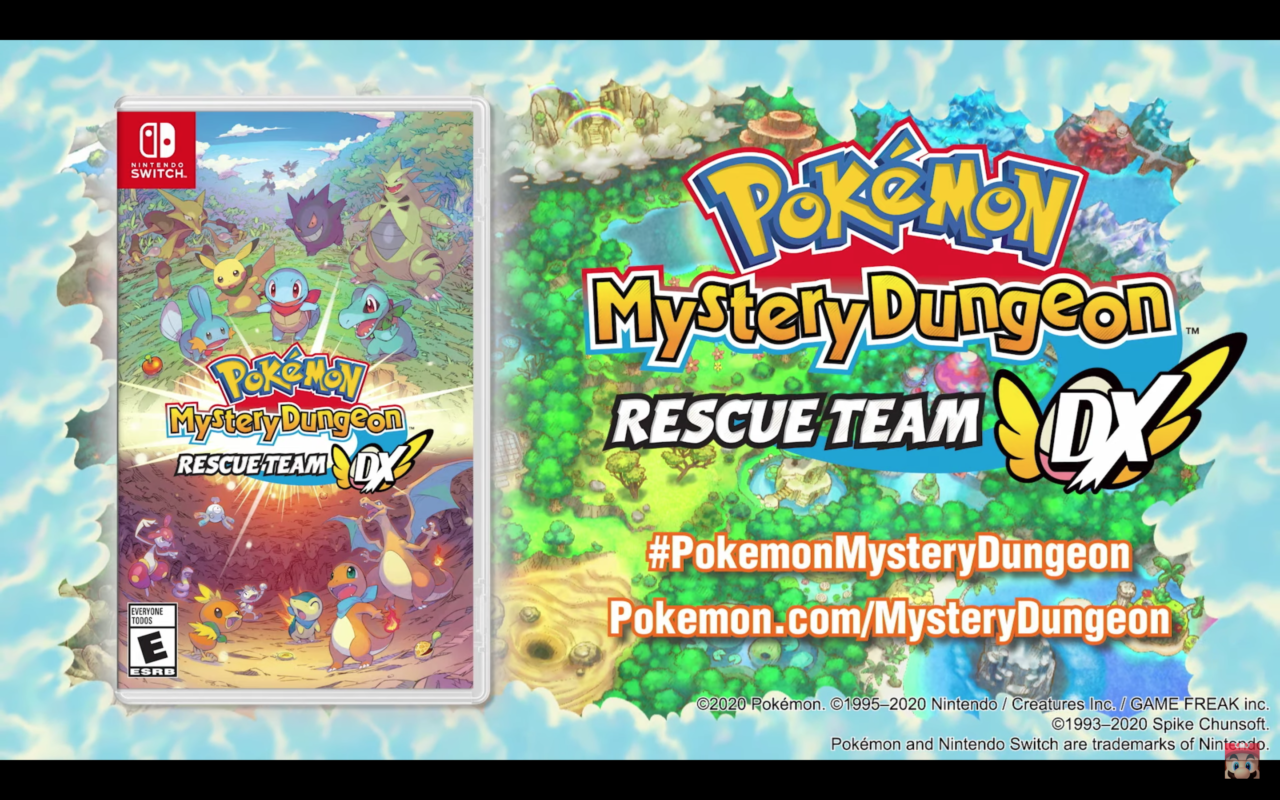 The video opened up with an out-of-the-blue announcement of a new(ish) game, a remake of the original Pokemon Dungeon: Rescue Team, an Advance / DS game. I’ve never played the series, so I can’t offer much, but this looks to be another in a long line of solid remakes hitting the Switch. It’s coming out on March 6, 2020; in recent Nintendo form, there is a demo that’s out today and progress will carry over to the full game when it releases.

After that quick little announcement, we went over to Game Freak. I love the little Scorbunny plushie, mostly because I bought the same one for my daughter (I still need to buy the other two starters). It started with just screenshots of the base Sword and Shield games, then quickly showed off what they were really here to talk about: expansion passes for Sword and Shield. 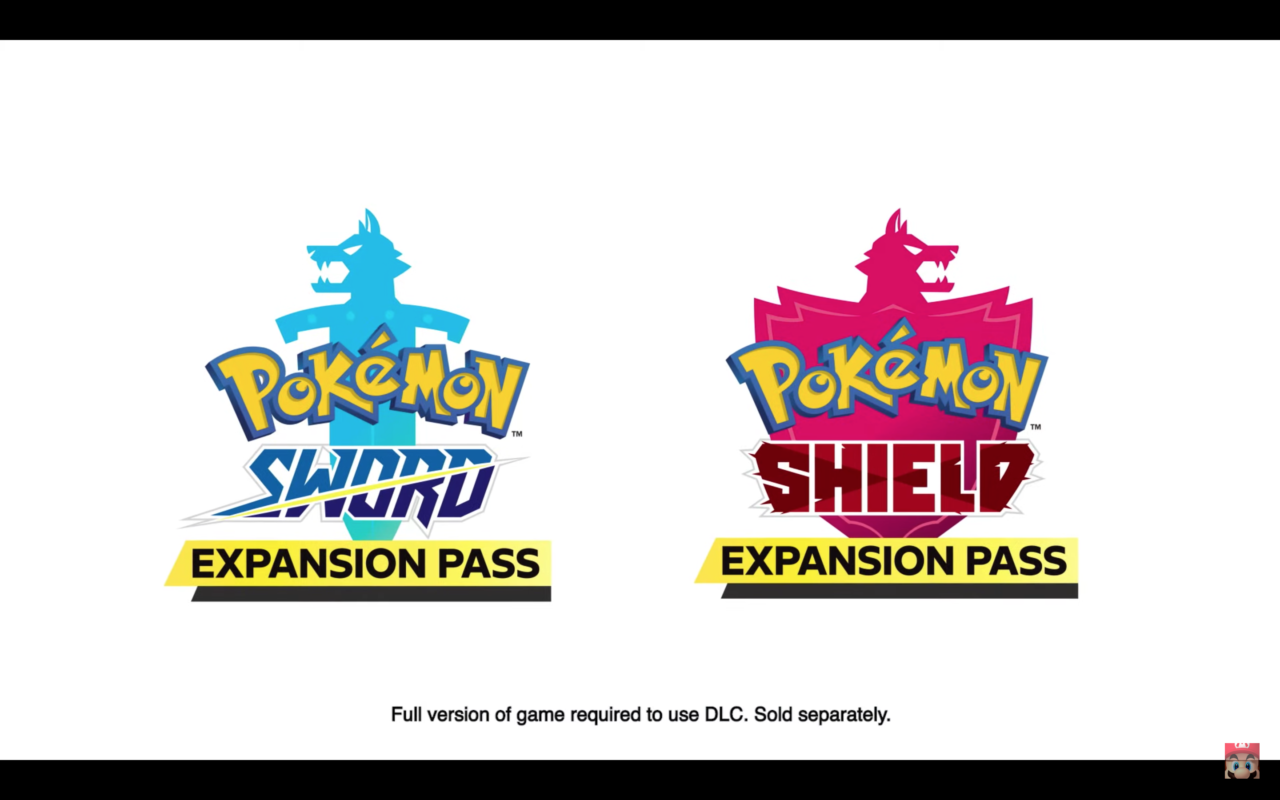 It’s going to cost $29.99 for each game, obviously requires the full game… and is looking like an evolution (and hopefully a replacement for) the old remake versions (Yellow / Emerald / Platinum / Ultra, etc). My initial thought would be to follow the pattern of the Smash fighter pass, and give us blocks of DLC that had 3-5 Pokemon in it that were dropped in the world. Game Freak apparently saw my comment on Discord and said… nah.

Instead, we’re getting two brand new areas, similar to the Wild Area in the base game, the Isle of Armor (June 2020 release date) and the Crown Tundra (Fall 2020 release date). It will have a full story and new rivals, while also carrying the best bits of the Wild area (smooth transitions between areas and dens). The bigger news, though, is the 200+ new and returning Pokemon that come along with the pass. There were several shown in concept art and previews, including a lot of Gen 1 pokemon (hopefully everything from Let’s Go). 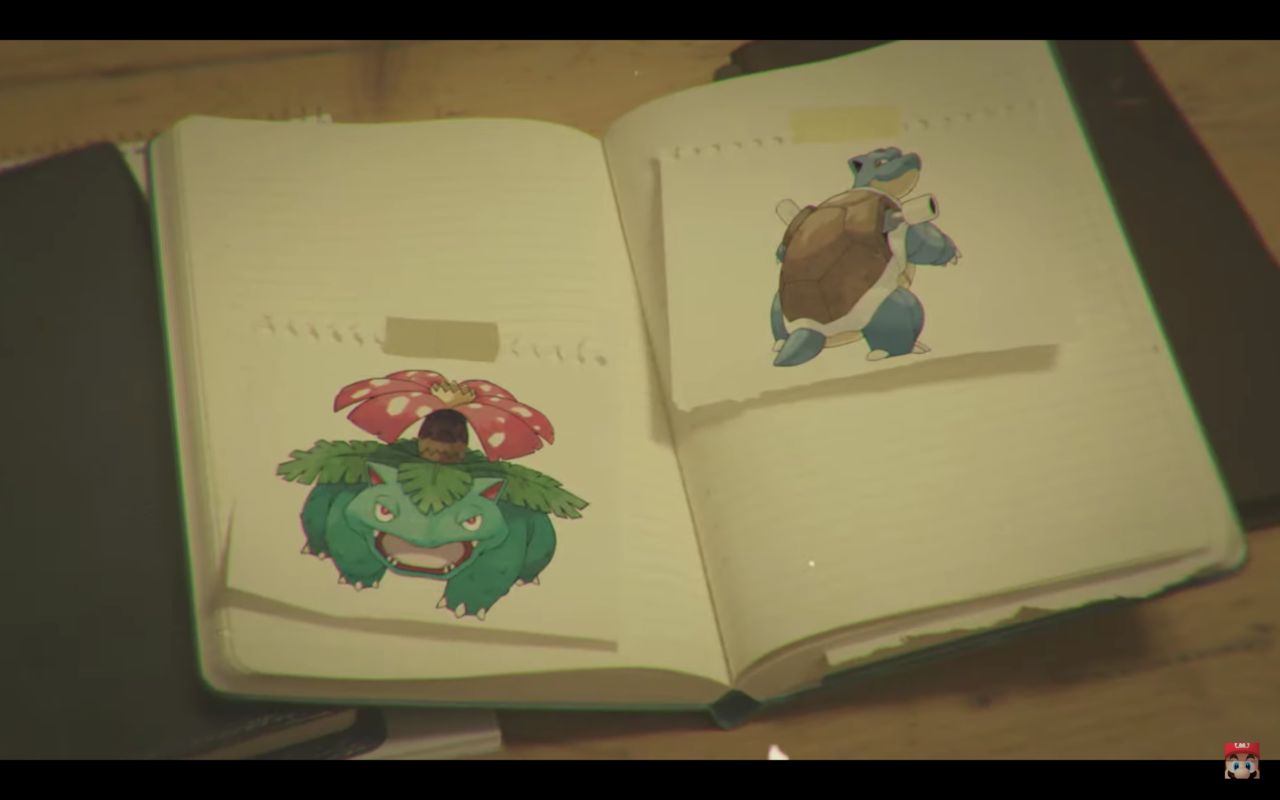 Most important to me is the inclusion of Blastoise, which means I can get my Squirtle friend at long last, along with Venusaur – both of which will have special Gigantamax forms to join the other Gen 1 and Let’s Go starters that already have them available. The Sword and Shield starters are also getting special Gigantamax forms, but it’s unclear if they will be granted or something you access. I may be #teamscorbunny and all, but wow, Inteleon’s sniper positioning was just awesome (lucky me having a great one leveled up already). 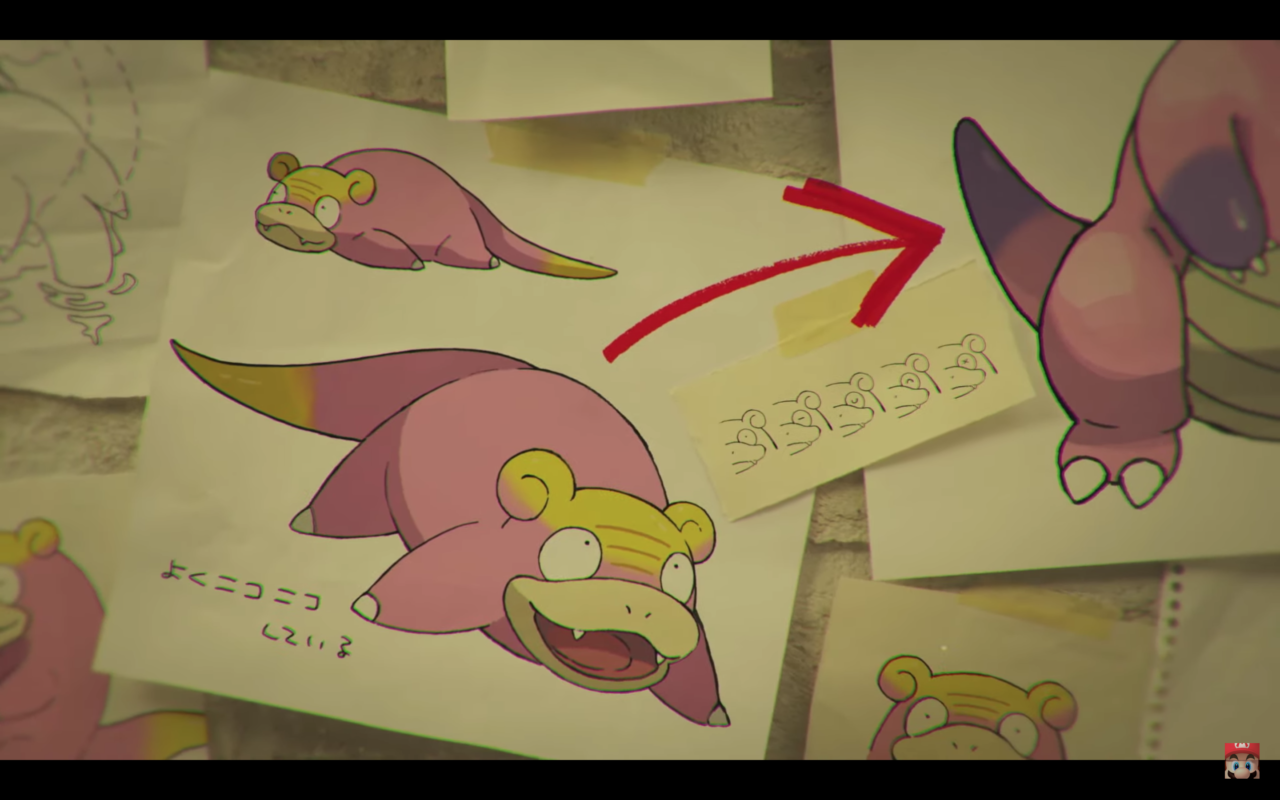 Some of the returning pokemon will have Galor region forms, which have been pretty fun overall on the existing pocket monsters. Slowpoke was featured heavily in this new Galor form; his evolutions to Slowbro and Slowking come from items that will each be in the new region, so we’ve got months to finish the updated Pokedex with the update. More importantly, though, is that many (their words), if not all (my hope), of the Legendary Pokemon from previous generations will be showing up in the new areas for special co-op battles.

There’s also a ton of new cosmetics and costumes coming, including exclusive Eevee and Pikachu trainer costumes that are included in the pass and will be available today. Nintendo continues to be awesome by putting cosmetics and other stuff in the game and rewarding them with gameplay. Yeah, for these you have to get the DLC, but it’s not some microtransaction bundled into the game and nothing available without it (there are a ton of costumes and customizations).

The changes aren’t just in the future, though, because the game continues to get regular updates. A patch today adds new Gigantamax forms to Wild Area raids for Lapras, Coalossal, and Flapple/Appleton starting today. There’s also a “preview” of the expansion when you visit the station, and you can get your own Glarian Slowpoke and meat the rival for your particular version of the game. 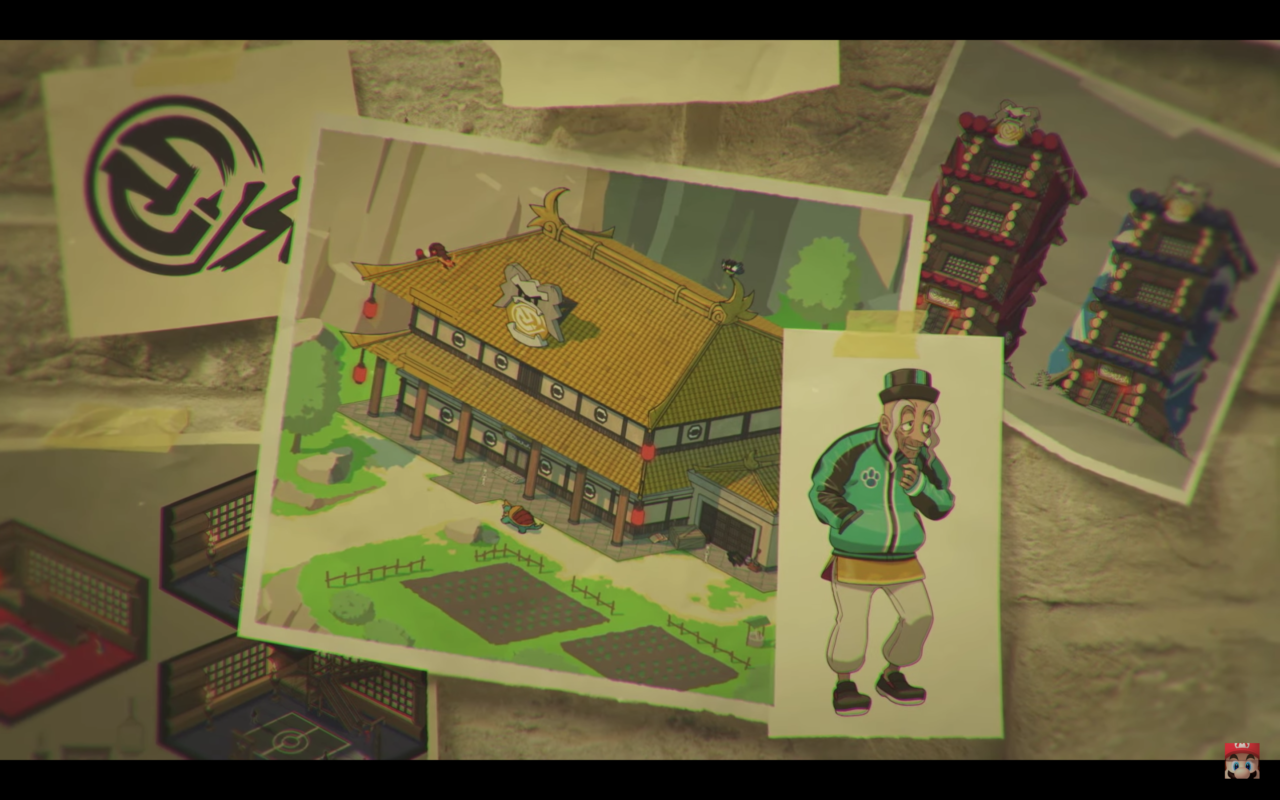 The curious omission from the direct was any substantial details on the upcoming Pokemon Home service that will connect the modern Pokemon games. They did address it, said that it is still coming out next month, and it connects Bank and Let’s Go into Sword. It seemed to imply one-way trades, but we’ll have to wait for more details on it in the near future.

So, now let’s talk about the Snorlax in the room that some people are already railing against on the game… that the dex is being expanded, but that it’s being done behind paid DLC. I’ve been critical of DLC and season passes in the past, mostly because a lot of the time, they’re slicing off parts of the game and repackaging it back to you for profit.

At the same time, I’m not against DLC and expansion passes just by default… they’re ways to continue development and allow you to play more of a game that you love. DLC can add so much to a game: Mass Effect 2 and 3 both had DLC that added incredible amounts to the game. Of course, the other side of the coin, which also, ironically, features Mass Effect 3, is when a DLC expansion is just content carved out of the game (usually in the form of a pre-order bonus or something at launch) with From the Ashes.

That’s not what’s happening here… Sword and Shield are two full games packed with content, and whole and complete stories on their own. Even with the Dex cut, there are a ton of Pokemon, variations, shinies, and so much stuff. Did it suck that the dex was cut? Yes. Does it make the game less worthwhile? No (at least in my mind, and based on their initial sales, many, many others). This is clearly new development being done for the game, and it’s perfectly okay for them to sell that as a product.

I’ll admit my own biases here… I was willing to pay for a Pokemon pass like Smash gave us, so the fact that I’m getting vastly more for a bit more money (I was hoping for $20, but we’re getting a bunch for the $30) is huge. I don’t buy into all of the conspiracy theory nonsense that was floating to the top of the bowl when Sword and Shield came out, where people were looking at meshes and models, because that’s not how development works. After having played the game, it was not a copy/paste job, there was a ton of work done for the game, and adding and affecting the balance takes time and money.

Because this is Nintendo, and while they can be perplexing and frustrating, they’re also sincerely focused on making the best experience for their players, they announced a very surprising and welcome development. You may need the expansion to find and catch the new Pokemon, but not to use them. Players with the expansion can trade the new stuff to players without them, so it won’t disrupt the gameplay and fragment the community, which is so often the case for games with DLC and expansions (the Call of Duty games are notorious for this). It’s free content that is going to be added when the pass content drops later this year, along with other free updates, so they’re not just throwing away the players that only want the base game.

I’ll be honest, I was shocked with how much they brought up in the direct today, and it only makes me want to skip out of work early to go home and play more Sword and Shield. That’s everything that a direct or launch preview should do.