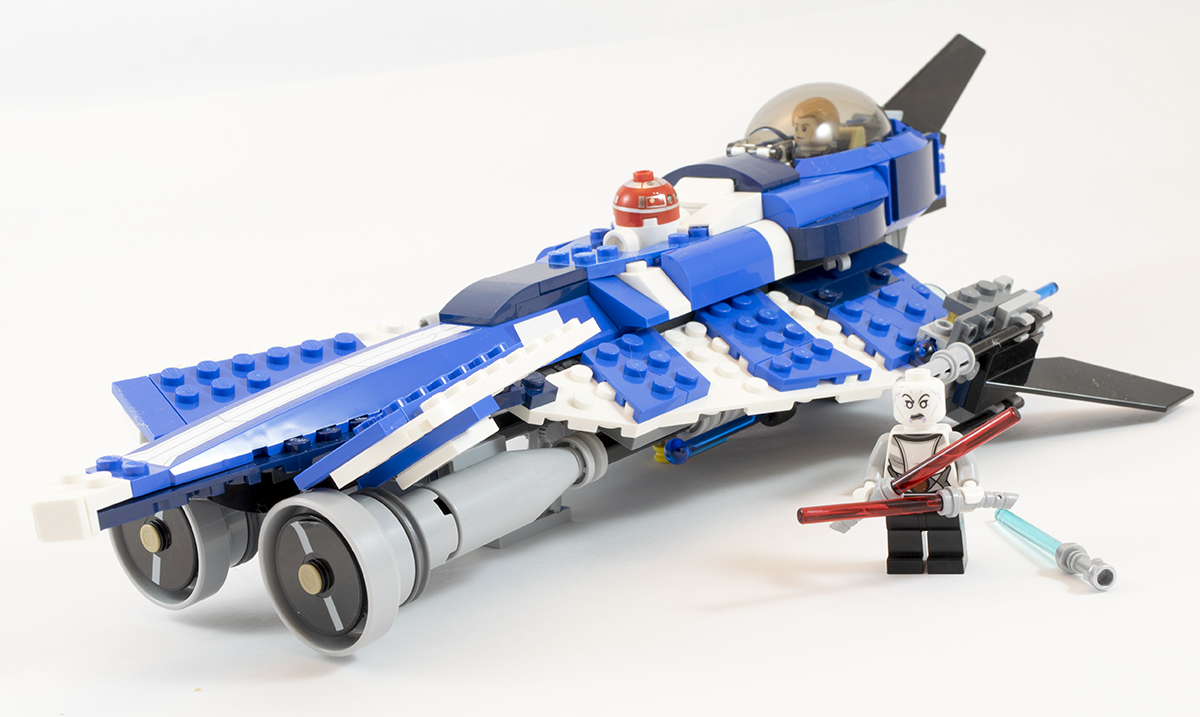 Sometimes, I wonder about the naming choices in LEGO sets. Anakin’s ship was calledÂ the Azure Angel, which is a far cooler name than the sterile “Custom Jedi Starfighter.” What was it with this kid and angels, anyway?Â Was Milton writing in a Galaxy Far, Far Away or something?Â This is an especially curious set in the grand scheme of LEGO, because it’s only appearances are in the original Clone Wars cartoon from back in 2003, which is now part of the Legends stuff and no longer canon… cut with the rest of the EU. Given how hard Disney has been pushing Rebels and the new stuff, it’s curious why it came out a decade after it first appeared. I mean, LEGO’s target customerÂ weren’t born (or were just born) when that cartoon was on the air.

I suppose we can count ourselves lucky that this still came out, because it’d been almost three weeks since we’d gotten a new version of the Delta-7 Jedi Starfighter. Okay, yes, it’s actually been a few years for this variety… aboutÂ as long as it’s been since we had new Clone Wars episodes. So we have a ship that has nothing to do with active shows, with characters that aren’t part of Rebels (okay… kind of for Anakin), and a ship that doesn’t have a direct connection to the PT movies.

At $40 and 370 parts, this sits on the higher sideÂ of the Starfighter sets. It’s also a Walmart exclusive;Â since I do almost all of my purchases at LEGO Brand Retail or Shop@HomeÂ I’ve lost al concept of exclusive sets. I wasn’t honestly all that sure about reviewing 75087 Anakin’s Jedi Custom Starfighter given that most people probably made up their mind about the set before it showed up in stores. I really liked the last JSF, Saesee Tiinâ€™sÂ Green Machine, even if I made up that name because his name is spelled so funny, so I tried to keep an open mind reviewing this set… but I won’t ever claim that it was easy.

You know, when we look back at the Clone Wars, we all probably owe it a bit of an apology. Yes… the faces are still monstrosities, but compared to some of the crazy line wonders we see now, not as bad. It also gave us a whole ton of minifigures we likely wouldn’t have gotten otherwise, and greatly expanded out the alien lineup for Star Wars. There were also quite a few good vehicles and ships in the lineup. Oh, and the cartoon was actually pretty decent. 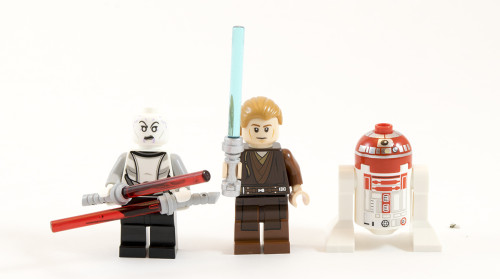 We get three minifigs in the set,Â Asajj Ventress, Anakin Skywalker, and the creatively named “Astromech Droid.” Given that everyone in the Star Wars universe has a name, even the background characters of the bar scene in Attack of the Clones… what did this guy do. Is he like a hipster droid, too cool for a number?Â Only Asajj is a unique variation, her only non-Clone Wars face version. Anakin previously came with the amazing Republic Gunship, and Astromech came with the V-Wing. 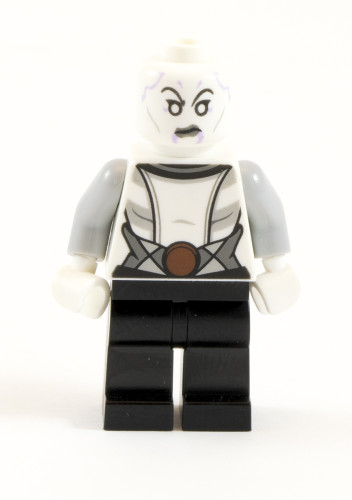 AsajjÂ Ventress was probably the most interesting of the villains in the canon Clone Wars cartoon, but I know nothing about her from the original series (I know some people liked them, but I found them unwatchable).Â Ventress was both conflicted and tragic, and that made her interesting. Of course, she was also a Nightsister, so that’s just more points in her favor. Her new face is certainly a lot more basic than the Clone Wars version, and I think it really fits her character pretty well. 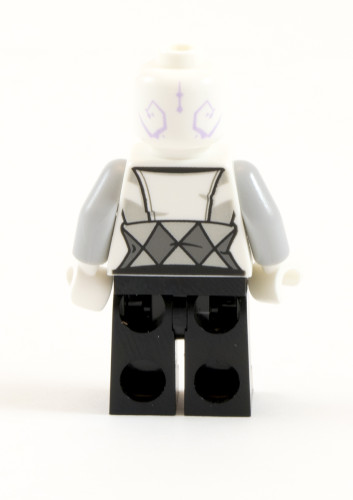 The weird thing about this character is that they tried to print it with the lithe, slim look that Clone Wars and Rebels is known for, and she was even more so in the original cartoons. They didn’t do this forÂ Sabine, which is a shame. It works here, because I used a white background, but something about it feels a bit strange. 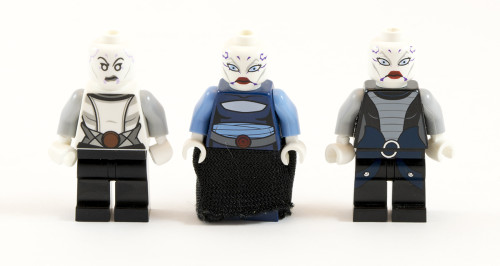 It ultimately works, though, because the previous versions of the minifig just looked so bad (especially the initial one with the robe). If you never saw the Clone Wars, you likely have a different picture of this character in your head thanks to how bulky the figure looks. She was, however, thin and lithe, and I think that comes through better on the new one. I also find it hard to resist going all Star Wars Galaxies and giving her a Rancor pet, but that’s somewhat unrelated. 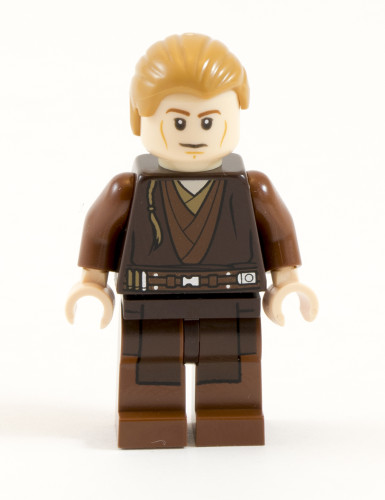 Anakin is identical to the RGS version, which is a fine representation of an undesirable character. Seriously, this was easily the worst version of Anakin to grace the PT. The kid in Episode I is annoying, but he’s also a kid. I’m sure that stuff sounded like solid gold to him. The Angsty version in Episode III is awful, but he’s at least able to back up some of the cockiness. This one basically mouths off and loses an arm for it. 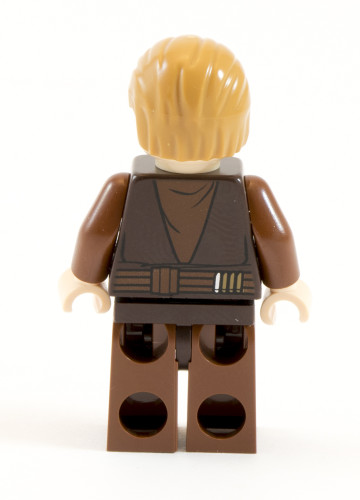 The tunic is still fairly generic, if you want to make an older Padawan, but you’ll have to put up with having those four bullets on the back of his belt and that he wears a tunic that looks right backwards and forwards in case you’re so dense that you can’t remember which way the tag goes. 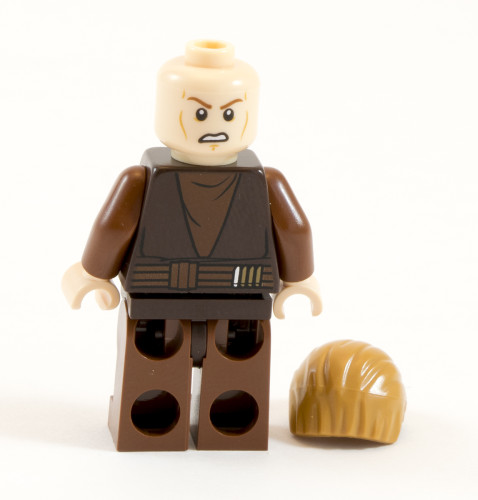 At least we have one of the few Jedi where an angry alt-face makes sense though. 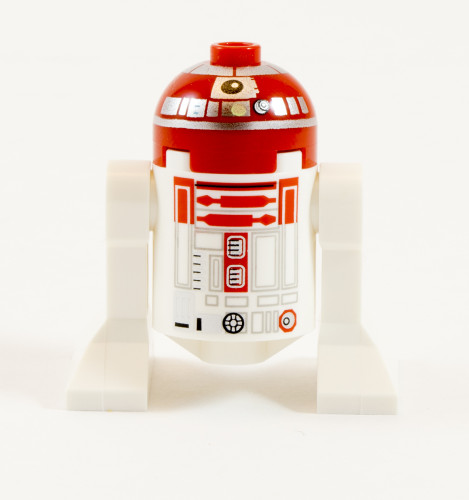 This is an Astromech Droid. He’s red. I have nothing more to really add here.

Whenever I look at this ship, I keep humming Offspring’s Pretty Fly for a White Guy… is that normal? Maybe it’s because this ship is obviously supposed to be souped up, but it just looks so ridiculous that you can’t take it seriously. If LEGO still did chrome parts, this ship would be covered in them. 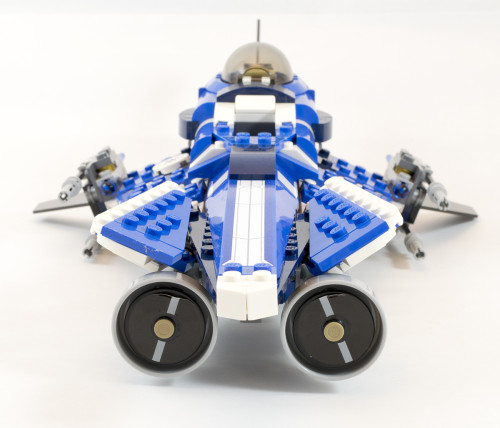 I don’t get why you’d have intakes far larger than the engine outputs… on a spaceship that would have no air to draw in. At least I assume they are intakes, because otherwise… I don’t know what they would be otherwise. They’re probably what make this thing look so dumb, because they are so ludicrously over-sized.

I think the big issue is that they just look unnatural, and kind of stuck on to the front of the ship. The overall concept here isn’t an awful one, just the execution of build. Really, the Azure Angel wasn’t an ugly ship in the clone wars… customized, but not nearly in the blingy way we see here. 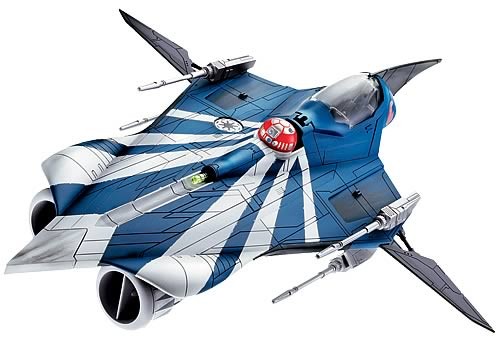 I get that there’s going to be some loss of shape just translating to LEGO… that’s part of the game with these ships, but there’s also a whole lot of things that you can do to minimize it. It feels like LEGO did absolutely none of them with this ship. It’s blockier than the last version and doesn’t incorporate a few of the more notable features like that center launcher. 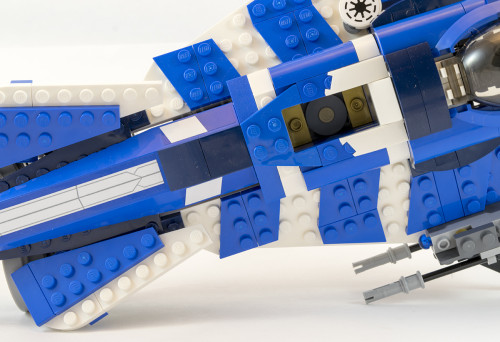 Instead, we get stuck-on flares, some rounded slopes, and a sticker. It’s hard to really describe just how bad this ship comes off in the pictures, but it really just doesn’t come off all that well when you hold it. Those front flares are flimsy, and get pushed up too high easily. The attempt at the stripes are okay, but still don’t quite capture it when mixed with the stickers. 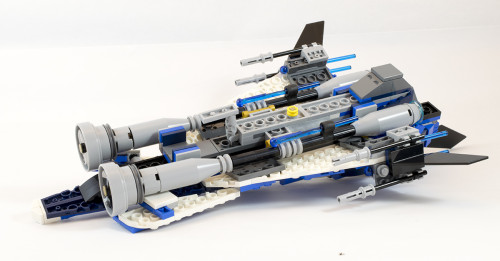 There are a couple of decent elements added to the system, like the rubber technic connectors that hold the extra flick-fire missiles. That would be a great thing if the rest of the underside wasn’t a total mess. The whole connection system just feels like it wants to break off, and it feels like a whole lot of the parts for the ship are tied up in this stuff. Maybe we could have forgone the little astromech launcher and done a bit more to make the wings less… bad.

The back is really the only part of this that looks decent, and only because you can’t see the majority of the ship. If this was one of the original Clone Wars or Delta starfighters… but this is likely the last version of it until we get a remake next year (and two years after that)… and it’s probably the worst. The parts palette has gotten a lot bigger since that first starfighter, and they could have done better with the winglets and the engines.

I’m sure there are plenty of people that want to remember those original Clone Wars cartoons, but this ship isn’t going to be what they remembered from it. If it appeared in more than just that original run or it was a more iconic ship, I’d sayÂ it could beÂ MOC-worthy… there’s a lot of room to improve it after all. But it’s not a notable ship, and there are better examples of the Delta-7 out there. Your money is better spent on any number of other sets than this thing, unfortunately, and since it’s only at brand retail and Walmart, it’s unlikely to go on sale until it’s ready to die a slow and painful death (so probably for the next May the 4th sale). The unique version of Asajj Ventress is what bumps it toÂ Â 2 out ofÂ 5.

Verdict: Two out of Five. You can pick up 75087 Anakin’s Custom Jedi Starfighter, or any number of better sets, right now on Shop@Home. And what in the heck is going on in that box art… why would you open the cockpit of a starfighter with a bunch of weapons to engage in a sword fight… while the ship is still moving at full speed?