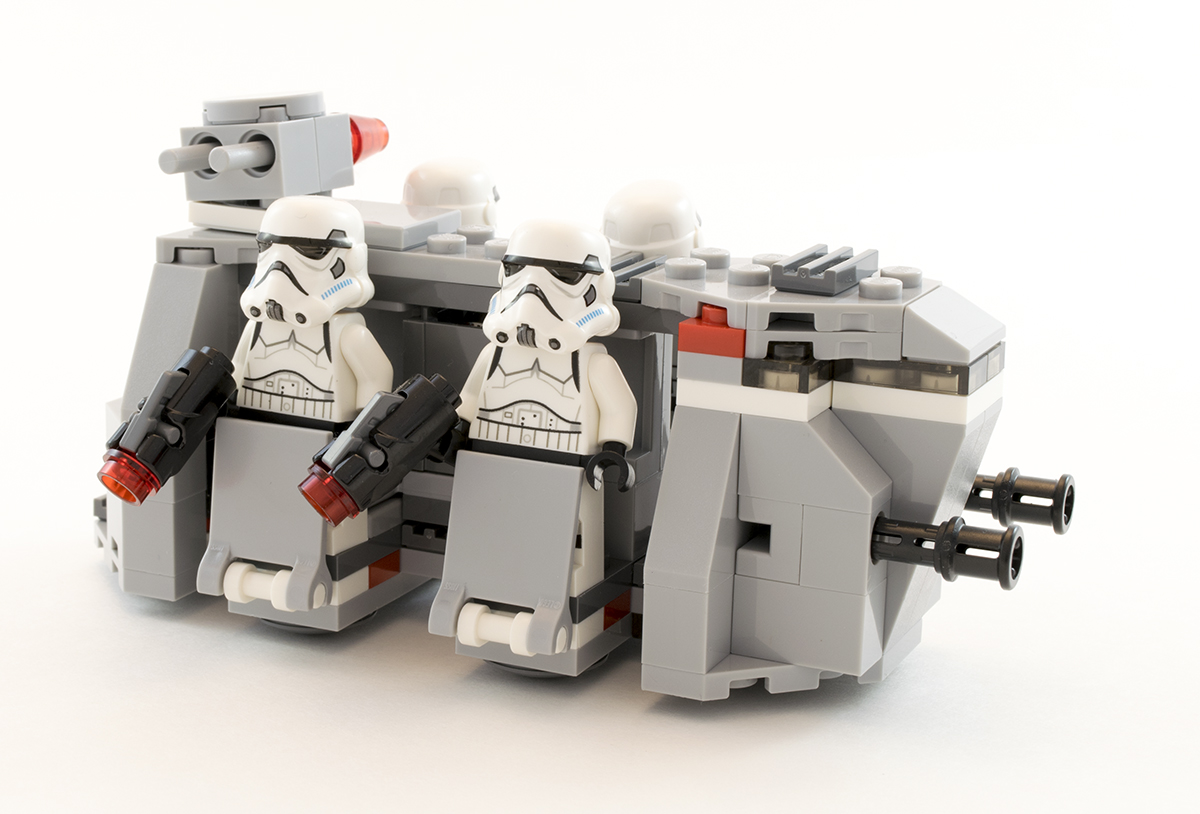 My admiration for Battle Packs is pretty well documented, given that I’ve reviewed them for the past few years. I missed a couple in there (that or they are really hiding from me on the search page), but I own all of the battle packs back to the original Clones and Droids, typically multiples of each, even the ones I don’t like.

When the leaks showed up with just names, Imperial Troop TransportÂ was a bit scary. They’ve tried to attack this particular angle before, and the results have been mixed at best. The Imperial Dropship battle pack was one of the best (and for me, most expensive) releases, but the Imperial Landing Craft is one of the worst sets that LEGO has made in the Star Wars line. Once pictures showed up, however, it became clear that we were dealing with a new battle pack that focused on Storm Troopers. At last, my dream of building the Emperor’s Arrival on the Death Star II was alive and well (that is doing it without spending a bajillion dollars)… even if said scene is some of the most mind-bending use of a matte painting ever.

We haven’t had a Storm Trooper-themed Battle Pack since 2008, and the last time we got a Stormtrooper in a battle pack was the Endor Trooper Battle pack. Storm Troopers show up as theÂ extra figure in a lot of sets, but typically aren’t cost effecti1ve to purchase in bulk. This particular set does have a downside, in that it’s the new “Rebels” version of the stormies, which means a lot more details and different designs. Yet at $13 and carrying four basic troopers, it’s going to be hard to say noÂ to this guy…

Recently, the biggest issue withÂ most battle packs is that they weren’t really great for army building. The focus was too often split, giving us some droids and and clones, or some rebel troopers or stormtroopers, but requiring purchases of a lot more packs to get a specific army. Last year improved on that a bit, even though most of the packs were pretty niche (and the ones that weren’t, like the Death Star pack, still split between two different types). 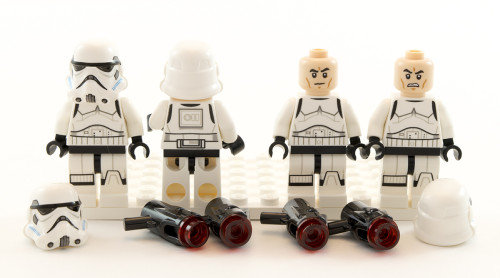 Here, though, there are no real surprises. It’s the new trooper design, which means a lot more details on the helmet and more detailed printing on the face. All feature fleshy faces under the helmet (which I’m no particular fan of, since that means we don’t get the black neck guard part of the armor… it just looks odd), and two different faces at that. Those aren’t alt-faces there, each one is single-sided printed, and there are two of each.

The new helmets are a bit overboard, with the blue really sticking out too much. I haven’t had a chance to watch Rebels and see if it is that stark on there, but they will stick out when next to regular troops. The printed legs, however, are a bit nice even if there is an asymmetry to them. The torso and back aren’t as bad, overall, but the black gaps on the arms strikes me as a bit odd. I guess budget cutbacks turned their full-body armor into more of a vest over a sweater thing. 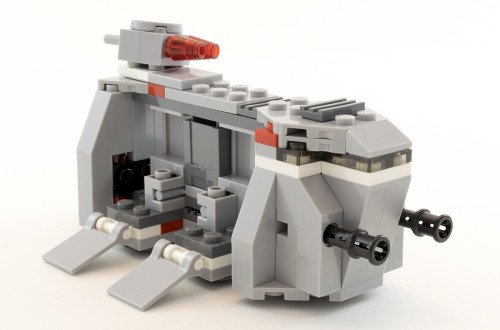 The little transportÂ is a solid build (and yes, I know my flick-fires got knocked askew… it’s an occupational hazard from having a two-and-a-half year-old daughter… it’s fixed a bit later), which you couldn’t say about the 2008 version. That dropship was a lot more blue, had a great little sticker sheet with imperial logos that I still use for MOCs occasionally (I bought a lot of those packs), and was pretty fragile with all those slopes. 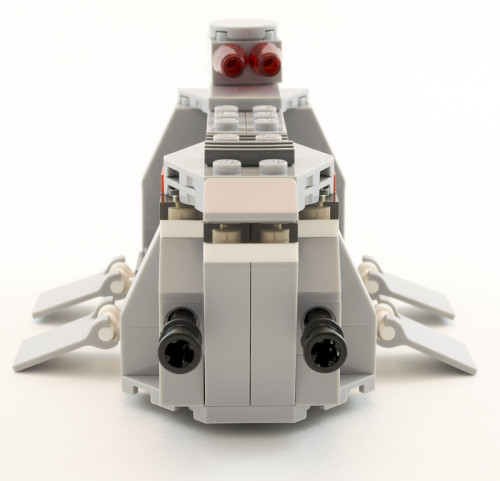 This guy is a solid little beast, even if it is a bit of a plain one. I like the use of pins for the guns up front, but the build itself strikes me as something far more Clone Wars and intended for Droids. I could see this thing being a good transportÂ for Super Battle Droids, Assassin Droids, or maybe even Magna Droids. For troops, it seems a bit small and awkward. 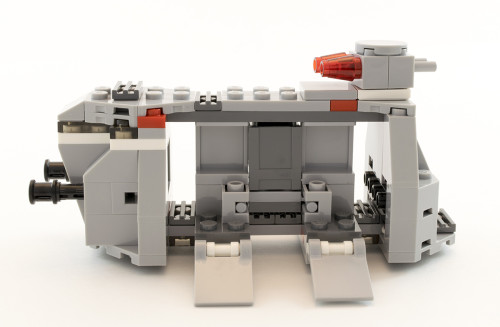 Part of the problem comes that there’s no easy way to position the troops without them holding their guns. This is less to do with space and more to do that the new flick-guns are just really bulky. You can kind of get them into that stud behind the flaps, but it fits strangely with the figures. There is a cool little removable bin where you can store all of the extra “ammo” for the flick-guns, which is a nice little touch to the build. When you have to take pictures of these things for reviews, you get tired of finding places to stick those extra 1×1 studs between the build and snapping the pics. You can find them stuck to feet or things like that in some of my review pics just because I forgot I stuck them there for the pictures. 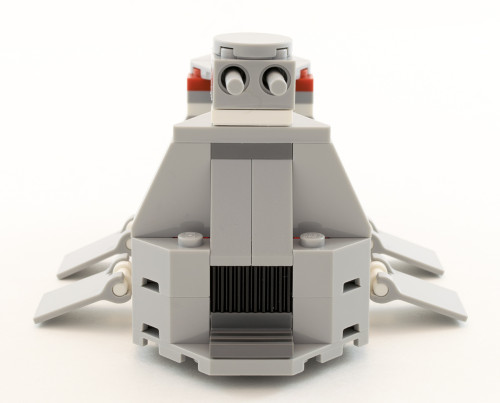 For parts, the carrier has a few interesting parts for us. The most obvious are the tall slopes, but we also get some corner bricks, slotted 1×4 bricks, plain light-stone flags, and and a few 2×1 cheese slopes. I don’t think that value by itself makes this thing a home run, but it certainly adds a bit to it. As it sits, this is a solid little ship that you can either break down or use as a transport ship in a battlefield MOC. I’d be curious to see how this works as an alt-build, since it has a pretty basic set of parts compared to some of the other.

Ultimately, this set is everything that a battle pack should be. A simple little ship and generic figures that you can use to build up an army. Yes, these are the new-style Stormies, with a Rebels bend, but the ship has sailed for the old simple designs.Â See, my fellow AFOLs, we are now the “I remember when…” crowd of old people when it comes to minifigs. But if you want multiple Stormtroopers, and why wouldn’t you, this is the easiest source to get them.

Four generic figures and decent parts at the $13 battle pack price makes this a solid fiveÂ out of five, and something that gets even better should it go on sale. I know that some will knock it because of the Rebels design (in fact, I will knock it), but that’s simply how things are going. The design of the Episode VII troopers is going to be just as controversial when they finally hit, but I won’t fault the set because the source material lets us down.

Verdict: If you want Stormtroopers, this is the best way to get them. Pick up 75078 Imperial Troop Transport right now on LEGO Shop@Home! 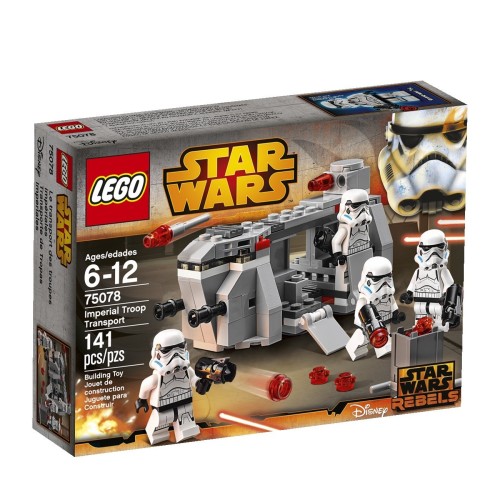