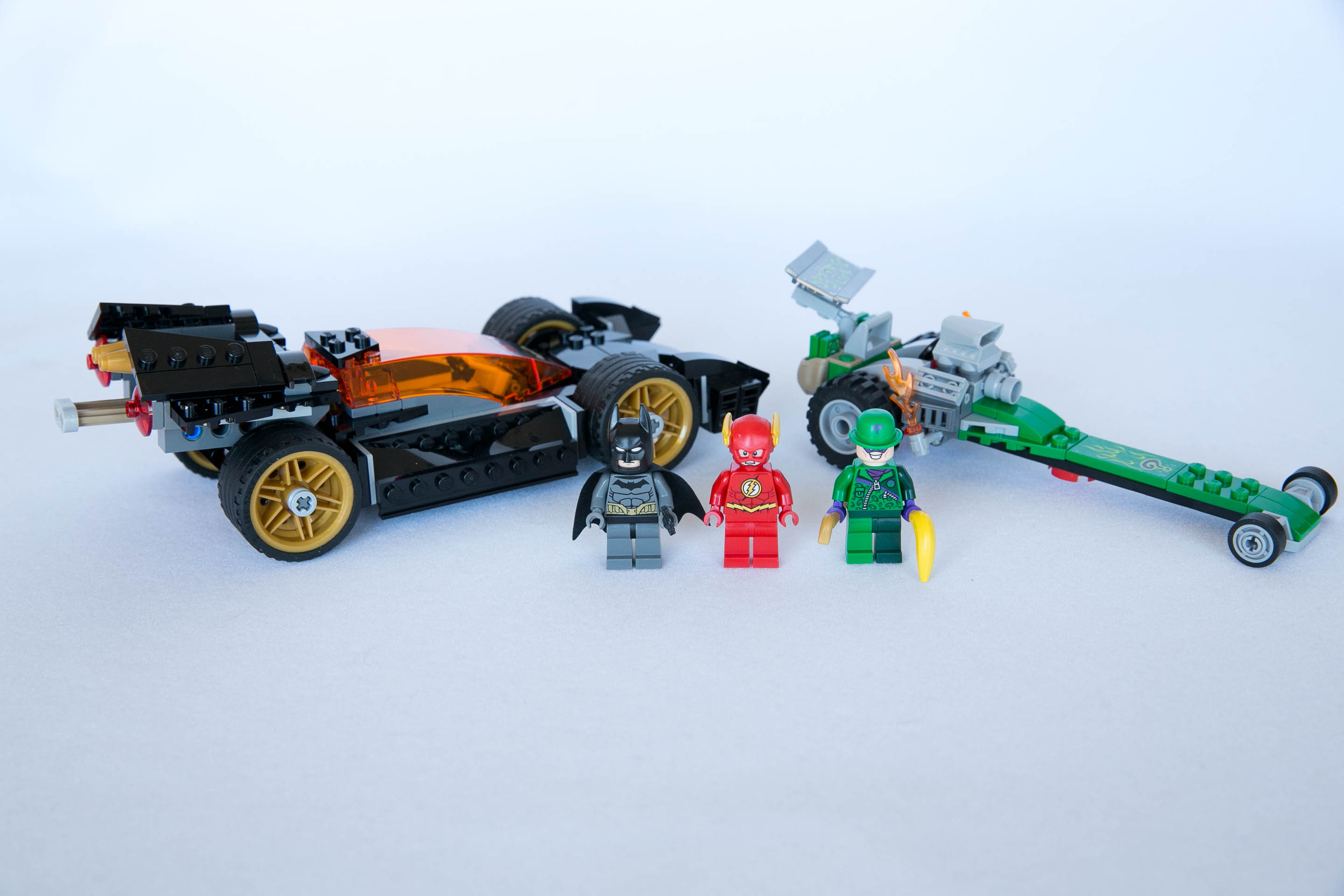 I really wanted to like 76012 Batman: The Riddler Chase ever since it debuted at San Diego Comic Con last year. But it sucks.

Let’s start with the good stuff. The minifigures. 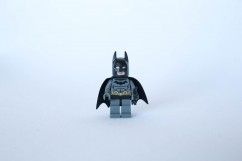 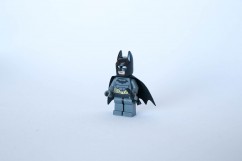 All three of the minifigures are new, including Batman. Though if you were to quiz me on what is new about him, I’d most likely fail that test. He still uses that cowl / white sweatband combo. 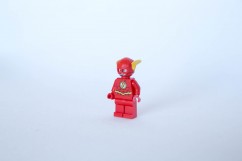 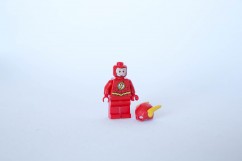 The Flash is just awesome. His mask is removable and just nails a comic-booky look. The head is double sided and printed to look like he is wearing a head sock underneath the mask. Seeing how The Flash was done makes me with they had done the same for Captain America where Steve Rogers could take his mask off and you can throw on a hair piece. 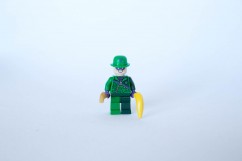 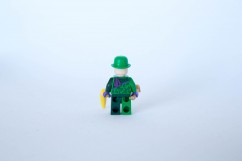 The Riddler is also new. He now sports a matching green bowler with his trademark question mark logo instead of the grey bowler he came with the Funhouse Escape set. His get up is also entirely new with two tones of green and an overly detailed zippered jacket. I’m not understanding the two different tones of green. It’s like he and Two-Face went to the same fashion designer for their outfits. But no matter, he is leagues better than his super muscular counterpart from the Funhouse Escape set. His weapons of choice are a pearl gold crowbar and an atomic powered banana to take care of that pesky Flash. 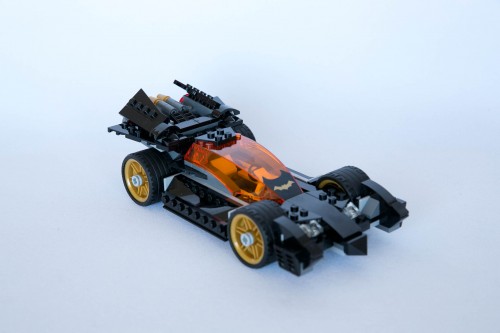 Between the two vehicles, the Batmobile is the more interesting one and by interesting I mean less sucky. It doesn’t roll very well because of 4L Axles With Stop used on all four wheels. If you were to push the vehicle and let it go, you know, like if you were just vrooming it along, the weight of the vehicle would cause the stops on the axles to rub, causing friction and resistance making the vehicle just kinda stop short. 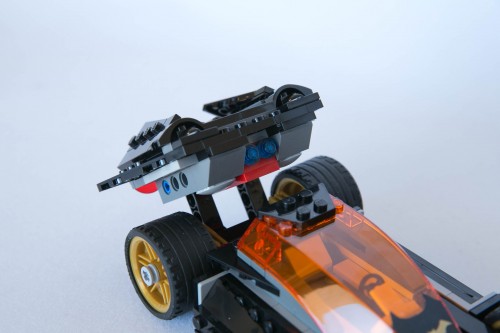 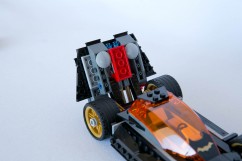 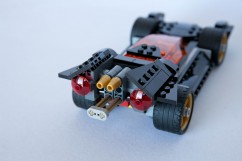 The rear spoiler is where most of the action is. It’s where the two flick fire missiles are housed. Tilt the spoiler back, push the lever, and away they go. The spoiler tilts way, way back, almost too far back. Click hinges here would have made a bit more sense to give it a more solid feeling. Flick fire missiles suck, but they are present in this set and come with a nifty launching mechanism that works well enough. My only problem with it is that it sticks out the back rather noticeably. Another issue with the spoiler is that there just seems to be too much going on. You build certain things, and without a detailed blueprint of what part is supposed to be what, you just sort of make connections in your head like, oh this is an intake, or this is a jet booster, or this is for design. The spoiler has a bunch of features that I couldn’t figure out. Are those big trans-red boat tiles exhaust ports or brake lights? What the heck are those cones sticking out for? It’s just strange the kinds of details that were included with seemingly no rhyme nor reason. 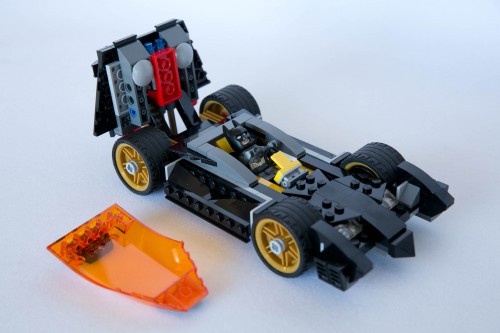 The last bone I have to pick with the Batmobile is that the canopy is not hinged and has to be completely removed in order to get Batman in and out of the vehicle. A hinge on the nose to flip the canopy forward would have been oh so cool. 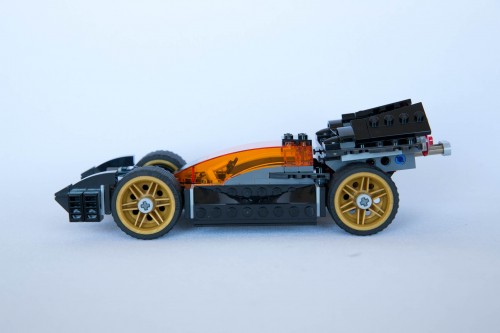 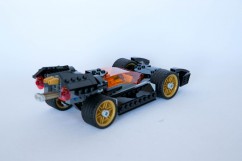 Despite those flaws, I rather like the Batmobile. The overall design sort of bucks the usual trend of how Batmobile’s are designed. It avoids using giant wing pieces for fins and the trans-orange canopy I really dig. The open wheel design gives it an aggressive F1 look and feel. Other than black, there area few hits of grey here and there that are spread out enough to not spoil the monochromaticity. I appreciated the white plate placed underneath the trans-clear cheese at the front to give the impression that the headlights were active. 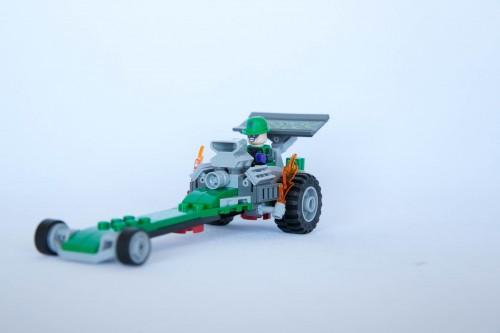 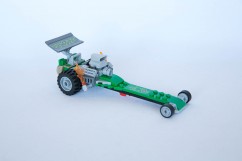 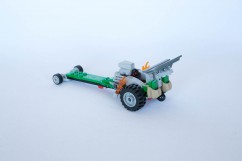 The Riddler’s Dragster. How much did this thing suck? Let me count the ways. Look, I’m not even going to argue the merits or lack thereof in choosing a dragster as a getaway vehicle. Or note just how bad the front end of the dragster is. Or point out that hanging money bags off the back of the vehicle is a dumb idea. I won’t mention any of those things because the most heinous crime of design can be found in the back and overshadows just about every other bad aspect of the set as a whole and that crime is the spoiler. 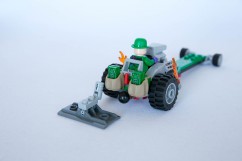 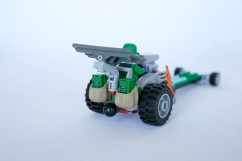 The spoiler uses a hinged panel that would look more comfortable in front of a snow plow than on the back of a racing vehicle. It certainly looks the part but that is probably the only merit in using the element here. The point of connection for the panel is a hinge, so the spoiler will tilt to and fro with no way to have the spoiler lie horizontally flat without eyeballing it. A click hinge would have resolved that issue but no such part exists. The entire assembly attaches to the back of the dragster by way of a hinge cylinder that slides over a vertical pin. The problem is that the pin provides absolutely no friction or resistance so the spoiler assembly rotates all willy nilly, looking and behaving more like a radar dish than any type of spoiler. Replacing the vertical pin with a click hinge plate and changing the hinge cylinder to a different type would have locked the spoiler assembly into place preventing rotation, and then the only problem would have been the hinged panel tilting from side to side. And that issue would have been completely negligible and a non-issue. But since things aren’t that way, the tilting just amplifies an already crappy design.

Like I said at the beginning, I really wanted to like this set. It had a lot going for it: great minifigs, cool Batmobile, a banana that is clearly a nod to the old comic, and a dragster that could have been just okay. But after building the set and spending some time with it, to be honest I felt a little cheated. Perhaps building the Sandcrawler prior to this set ruined the experience for me because it felt like it was produced by a junior designer. It isn’t anything specific, just an overall feeling that things could have been built better. And the reality is that what you end up with is a sub par set. And that spoiler on the dragster? Come on. I know it seems like I can’t shut up about it but I don’t think it’s unfair of me to expect a toy that can be played with without disfiguring itself after one vroom along the table top. I can’t for the life of me believe that the spoiler made it all the way past peer review, play testing, and eventually green lit for mass production.

After consulting our handy cheat sheet of review scores, this set actually ranks a 2. It’s not so bad where LEGO would have to pay you to take it (a score of 1) and it’s not good enough to keep an eye out for any sales (a score of 3) because the parts selection is underwhelming, so 2 it is. I was initially going to give it a 0, but Google doesn’t seem to like 0 scores which I really don’t understand. If the ancient Mesopotamians understood the concept of 0, I don’t see why a search engine can’t. Anyways, I was going to give it a 0 or 1 but reluctantly I give it a 2 because despite the crappy dragster, the Batmobile was neat and the the minifigs were awesome. I say just Bricklink the figs and call it a day.

If you really wanna buy it, at least click through the link below and help support us so we can buy more sets to complain about. 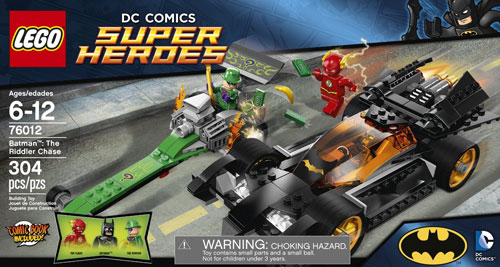