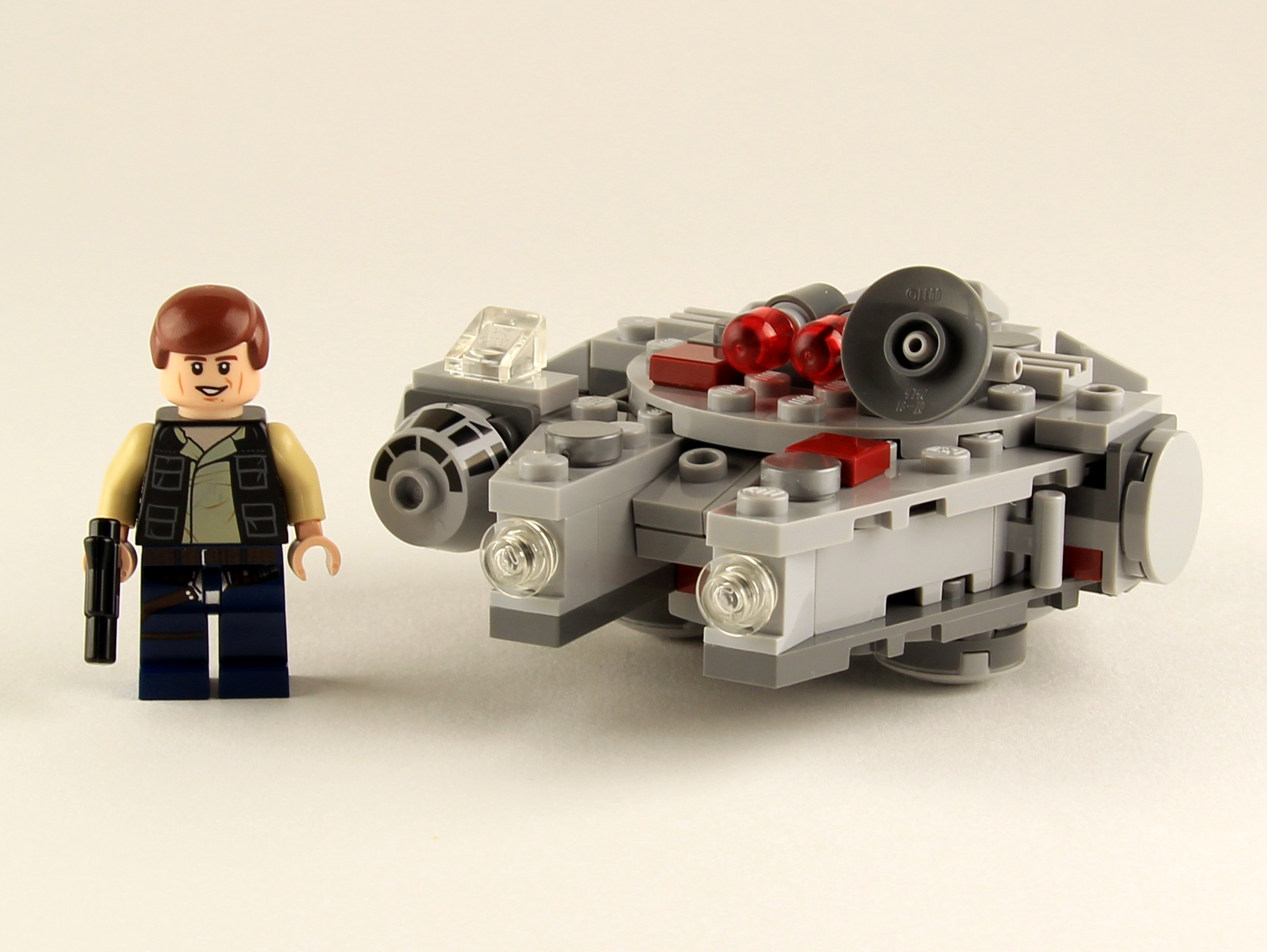 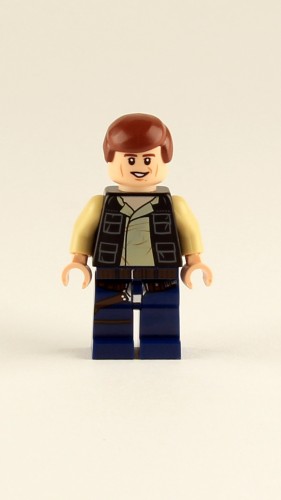 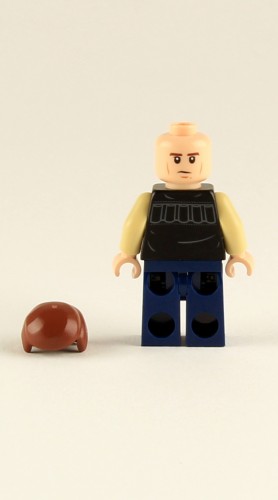 We get the infamous (in his own mind) smuggler, Han Solo in this one and I bet you never saw THAT coming! He comes with the same torso as the recent A-wing and Ewok Village, but he has a new two-faced head and blue printed pants. I really prefer this outfit and I like that any kid who got the Star Wars Advent Calendar a couple years ago has a wookiee to go along with Han in this small, affordable set. They even have an option to get a brand new looking Chewie in the Droid Gunship set, or wait until he shows up in a cheaper one… like me.

I’ve always preferred the New Hope blue pants look, so I was pleased with this figure on the whole. Same old helmet hair for Han, but it works and only the chin and scar marks are visible under the hair in the back so it looks fine. It just looks like he needs to wash his neck more often. He IS scruffy looking after all.

I’ll admit that neither the open smirk or the unimpressed look scream Harrison Ford to me, but I have plenty of other Solo and Indy heads at this point… somewhere. 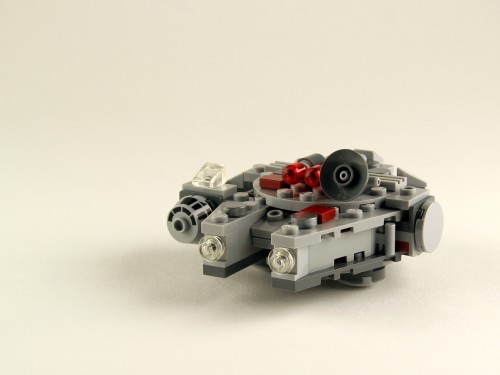 This is my favourite of the Microfighters. I wanted it as soon as I saw it. It just spoke to me. I don’t know what it said exactly, but it was probably something like “buy me” or “Keeee-eeeen, Come out to Plaaaa-aaay!”, so I did. 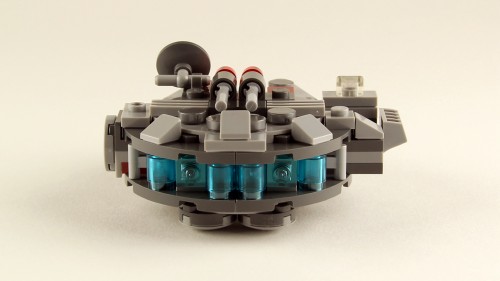 It’s unmistakable of course, but I think it works really well as a model in general. It has a few parts that are very useful, like the 6×6 round plate. Two actually, one on the top and one on the bottom. The construction is sturdy, as the three times I dropped that dang thing while moving it around after the build will attest. The build itself was quick and enjoyable, but nothing compared to the swooshing this little gem got.

I have only one real complaint. The 2×2 round tile on the side is blank. The original mini had the same part, but printed with the hexagonal hatch. Even the newer midi scale Falcon came with a sticker to replicate the old look of the print with the new grey part. The same part. They should have updated the original printed part or included the sticker in this one. They already had to print a one off part for this to make the astromech head fit as the cockpit, why not another. It’s an established part now and it’s a let down that they would leave it out after doing it twice before, so I switched it and put the old printed one on this. I don’t care if the greys don’t match and I probably never will.

They included multiple printed parts in each of the Chima Legend Beast sets. Parts that would be difficult to use anywhere else and that only adds to the already superior value of those five sets. They have superior parts, some printed, some stickered. They are very play oriented and include a figure that rides them as well. They have big sidekick displays for each of these two sub-themes at the Walmarts here, only an aisle apart in the same end position and I bet you can guess which one is selling faster. 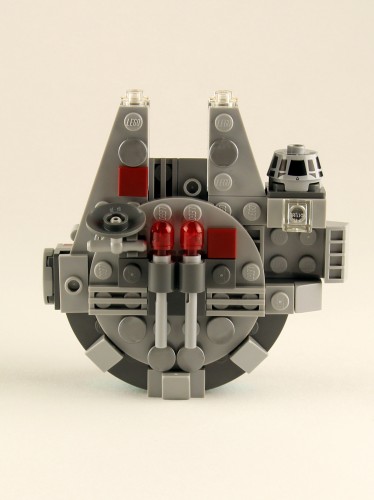 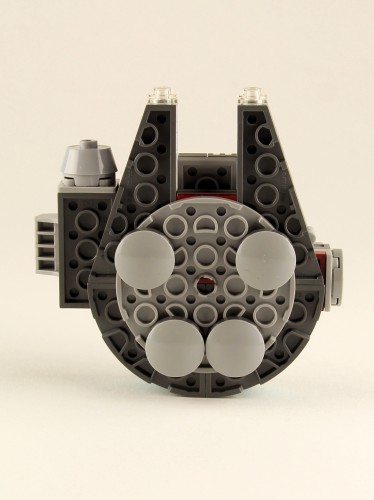 The Falcon is the only one of the series my son asked for, so I have one put away for Easter. Other then getting a second for my son, I can’t think of a reason to get a second of these. If the clearance was good enough the parts would no doubt be useful, but they are certainly nothing phenomenal. No, this is really a one and done set, but it’s a must have in my opinion. It’s a nifty little ship with a lot of potential for fun to be had. 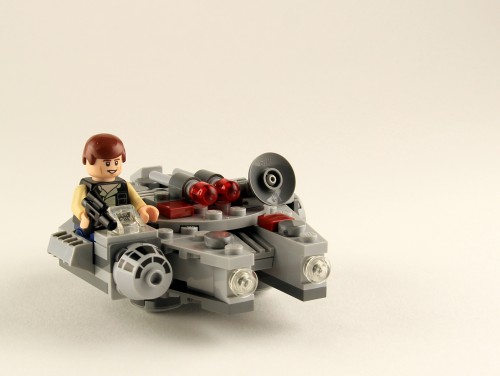 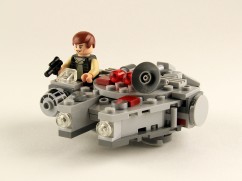 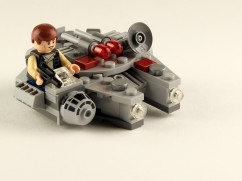 I can see many a collector set this little guy up on their desk somewhere and swoosh it around from time to time. I’ll admit that the last office job I had, I displayed some toys in my office. Plastic Man, a couple of Gen 1 Transformers and a couple ships from Star Trek that I enjoyed. I have no idea what the hell happened to those toys, which is a shame because I miss my Grimlock. I have never, ever had any interest in displaying LEGO sets for any length of time. I did leave the UCS Grievous up for a few months the winter I got him, because I liked seeing him with a Santa hat holding candy canes. Also, the big Technic Destroyer Droid was out for quite some time because I set it on top of a case behind a bunch of action figures and forgot about it.

However, as soon as I saw this set, I immediately wanted to do this… 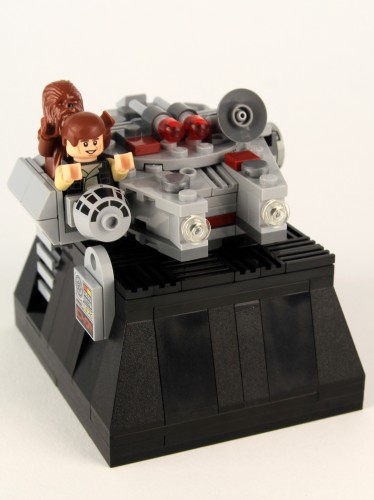 I had to. I mentioned it called to me right? Well the only clear part of that message was this. It’s no masterpiece, but I really wanted to turn it into a supermarket kiddie ride and if you’re going to do that…

“Wheeeeeeeeeeeeee!” I was originally going to make it rock back forth as it went up and down, but that seemed too exciting and I wanted it to be like the really lame rides that just vibrated oddly or popped up and down.

Afterall, it is a piece of junk. 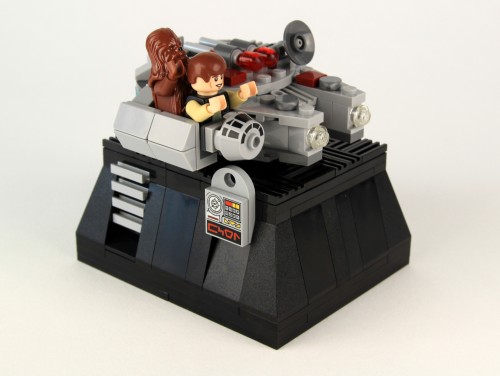 Verdict: A teetering 4. Printed tile and/or a couple bucks cheaper and this would be a firm 5 for me, easily. As is, it was a no brainer and it may even survive hitting the parts bin for sorting and remain on display for a long, long time.
But probably not.

You can pick up 75030 Millenniun Falcon Microfighter on Amazon now, where all six Microfighter sets are on a bit of a sale. 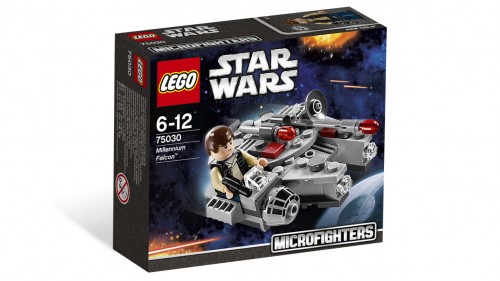 Since finishing this review a week or so ago, I have scrapped this for parts. It was a fun ride while it lasted.