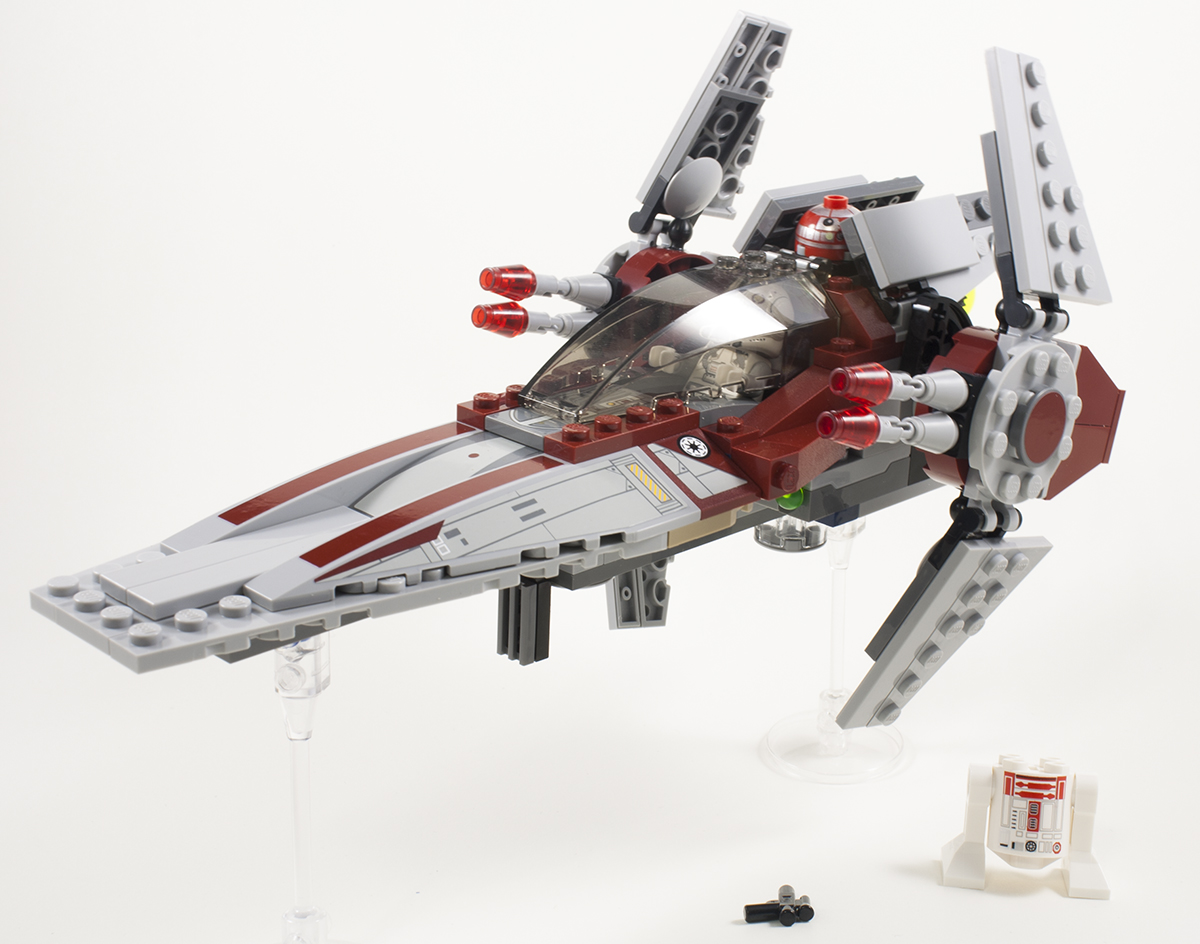 It’s always strange that the Star Wars universe has a fixation on ships named after letters for an alphabet that doesn’t exist (or didn’t after someone introduced Lucas to post-production to remove all of those english words for Aurebesh). But I suppose Xesh-Wing doesn’t really market as well as X-Wing does, and A Galaxy Far, Far Away is all about merchandising.

The V-Wing was an unremarkable fighter in a sea of unremarkable spaceships that littered the Prequel Trilogies. Sure, some of the larger stuff like the Venator had an interesting look that tied to the big stuff in the Original Trilogy, but for the most part, the ships were either not on screen long enough (ARC-170), too plain (Jedi Interceptors), or just kinda ugly (ARC-170 again). The V-Wing was an even worse case than either of the other ships, since it was basically just the wing-man to the bigger ship, and mostly it was there to get shot down at the start of Revenge of the Sith.

As a set, the V-Wing has been out once before in PT form, in 2006 as a $10 set that was notable for being a reasonable source of Clone Pilots and dark red Astromech heads. It was a different time back then, as there were… I don’t know, maybe three astromechs in total, so a new head was a very big deal. Eight years later and we have a couple more than three (I’m not feeling ambitious enough to check) and a new astromech isn’t all that spectacular anymore. Don’t get me wrong, I still love them, but the days of me buying some awful Republic Cruiser set just to get an astromech in green are over (well, mostly… stupid Sandcrawler). There was an “Imperial” version in 2010 that was kind of like a fusion between the original and this one, just with more black, Imperials only build in black. Or sometimes very dark gray. I know I bought that set, but have no idea where it is, and know that it was never very popular, so I’m going to stick to reviewing the PT versions of this set.

2014’s V-Wing is an entry into the “yet another $25 set” lineup that dominates Star Wars stuff this year. We’ve already reviewed the Jedi Interceptor and have upcoming reviews for the Wheelbike and Vulture Fighter, all at the same price point. This set comes in at 201 parts, which seems a bit on the light side, at least compared to the Interceptor, but is a bit more visually striking than the yellow monster. I liked the old set, simple as it was, because, at the time, it was an easy way to get pilots, wing wedges, and a few other parts that I didn’t have a whole lot of. These days, though, most of what came in the old one are absolute weeds in sets that I’ve got more than enough of, which leaves me somewhat curious if this new set, at more than double the price, can really wow me enough to buy as many new V-Wings as I did the old ones…

I actually don’t remember how many of the old ones I bought, probably five or six, back in the day. It had the unfortunate distinction of being from a movie I didn’t particularly care about and competing against my favorite year for sets, and only being $6 less than the A-Wings I just loved. I was also just married and a lot more poor back then, which means it was often a choice between eating or Lego (always kind of surprised I didn’t starve to death back then, because Lego came out on top more than I’d care to admit). Now, it’s basically the choice between domestic or imported beverages or Lego, so I’m in a better place- wait, no, I have a kid. Curses! 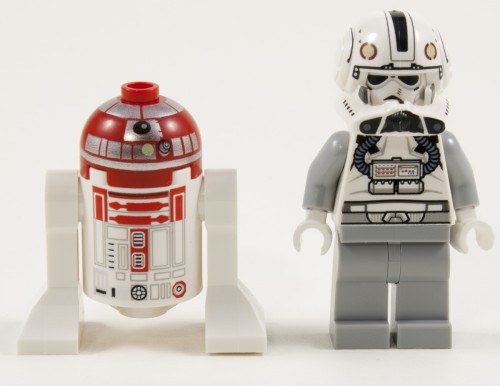 Normally I give each minifig it’s own section and do more detailed writeups, but there’s just not enough here to justify it. Both figures areÂ technically “BRAND NEW,” as Lego likes to tell me on the box. Red is using the new astromech printing pattern that we also got with green-top on the X-Wing Microfighter and the new R2-D2 that’s in the Interceptor. I like Astromechs, but I’m pretty sure they outnumber my troopers at this point. 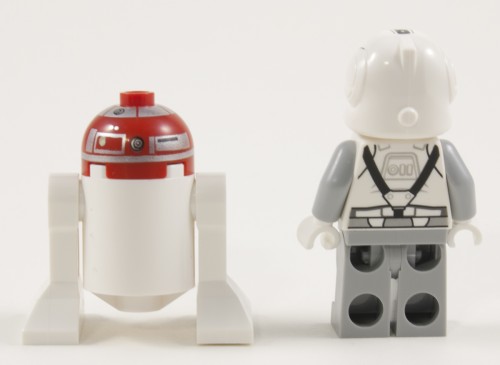 The clone pilot is basically the same as we’d gotten in the more recent sets, with the fancy open helmet, but the printing is slightly different and his legs and arms are light gray instead of sand blue. The light gray makes me kind of sad, as sand blue is just fantastic. That aside, this guy is very close to the Palpatine’s Shuttle set that came out in 2010. I had to look up what set the pilot came with, as it was one I purchased but couldn’t really remember. After looking at it, I remember why… that set was terrible.

We’re up to four Clone Pilots now (there might be a fifth that’s named and I’m not remembering, but I believe he’d be fairly similar to the third guy there). This is an interesting case in the new guy, as his printing is more elaborate than the one that’s closest to him (the second), but actually a bit closer to the original with the hoses being printed darker). While I like the new clone designs well enough, I think I still prefer the original pilot here. That open visor has more utility. The new guy’s head, however, could be used a lot of places… maybe in space marine armor or something. 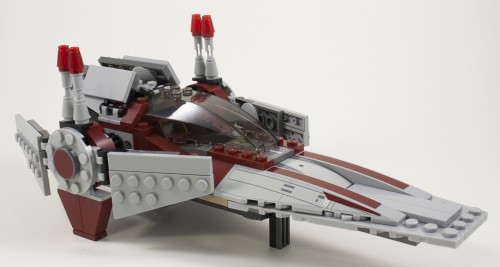 I noticed something kind of funny when I was checking Shop@Home for this set to verify piece counts and names… the full set art for theirs is also in the landing position of the V-Wing, with the guns pointing straight up. I’m not sure if this actually a canon thing with Star Wars, or just a design consideration on the vehicle because is designed so it’s almost impossible to use as a display piece. In my picture at the top of the review, I used clear bar/guns to hold it up (the same thing that typically holds up STAPs). 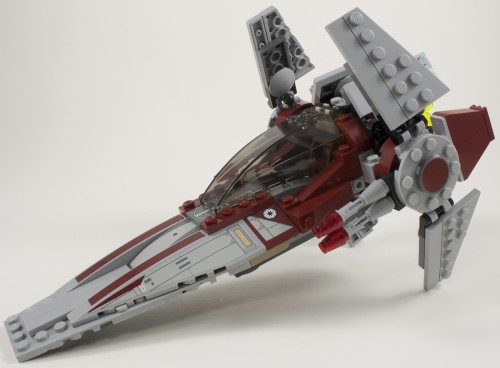 Sure, sometimes I do that just to hold up a vehicle so it looks cooler, but in the case of this review, it was more of a necessity to take a halfway decent picture. This is what it looks like if you want to put the vehicle into its “fly” mode and then lay it down. The wings are actually held at the angle by a technic ball pin to keep it from going in much more than the 15 degrees you see here. From a look point of view, I understand it. But from the practicality of a toy, it doesn’t work all that well. 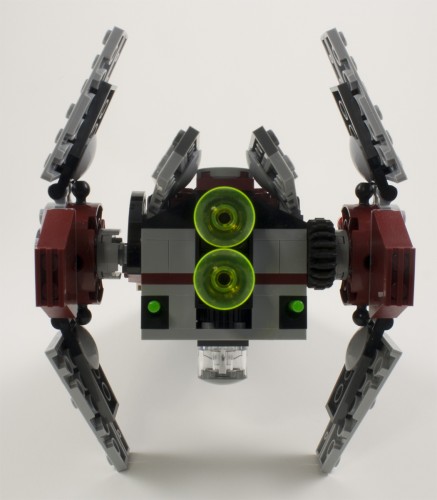 The wings actually as a swivel/tilt mechanism that goes from the upwards picture above for landing to the upright for flying. There’s a technic block on the left side and gears on the right to make it work, but the whole thing feels like it’s just there to overcomplicate the build. I tried to look up to see if there was a reason for it, but I could only find a reference to “the wings folded down to make landing gear” in the description. The back is also quite ugly for an otherwise sleek looking ship. It has the new flick-fires, but I can’t really blame them here… the whole thing is just a flat block with a angle plate to get the engines on. In the old set, they used tehcnic pins, and it was only $10. For $25, I expected something more, at least with how the rest looked. 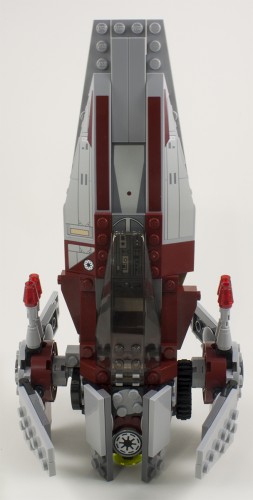 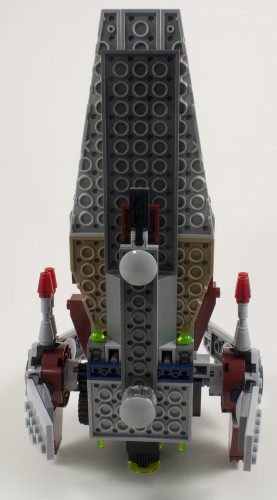 This set also makes some very heavy use of stickers. I still wonder why we don’t have a printed Republic Army logo, since it’s such a common part, but that’s minor. The stickers on the front slopes are actually nice, I especially like the gray/dark red one on the left. The one that just baffles me though is the one on the side of the wings. A dark red sticker on a dark gray round plate? Why don’t you just give me the round plate in dark red?! That was one of the best parts in the original set. 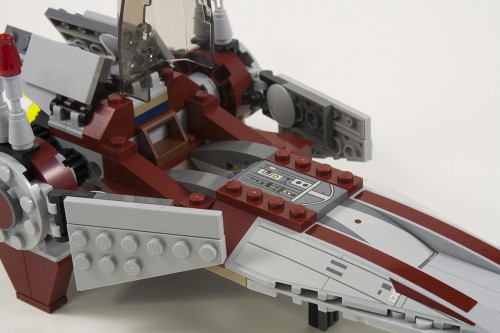 The sticker-fantastique-trick continues inside the cockpit, which is a lot better than the original “open to space” design that was just slapped on there. It’s a control panel, like the Jedi Interceptor, and some flares. A lot of the stickers in this set could have utility, especially those control pieces, which is nice. The cockpit is also a vast improvement over the original, but that’s not saying a whole lot, as the original one was just horrid. 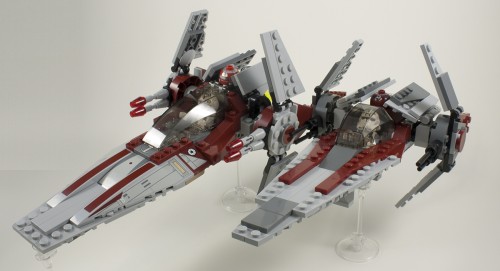 Putting the old set next to the new one shows off a whole lot of difference. Unlike a lot of remakes, most of the changes here are because of the additional part count and not the addition of new parts. There are a whole ton of parts available that a designer in 2006 couldn’t even dream of, but few of them make a play in this set. The curved slopes are the big players, and the 2×4 tiles. The new set is obviously a bit longer and a lot bulkier, but keeps the general look. 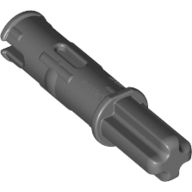 There is also one of that new technic pin in the set (2m pin and axle combo… the Lego replacement parts picture is above)… but there’s only one of them (and I didn’t want to rip apart the set to find it). Â This thing has some very promising uses in MOCs, and I’m sure will end up being fairly common, but right now it’s only available in 7 sets, most of them technic. It also shows up in the Batman Riddler Chase set and a couple of Ninjago sets, so expect a price premium on it in the aftermarket for awhile.

The problem with this set, ultimately, is that its remaking a set that wasn’t all that interesting in the first place. The original was a good parts pack and source of dark red when that color was still very rare. Much like dark tan, dark red is now a common color in the Lego mix, so it’s not as special. Outside of that technic pin, there’s not a lot of “wow” parts in here, and the pilot isn’t that huge of a diversion from the previous versions. Sure, he’s a lot different if you never bought Palpatine’s Shuttle, and given the discount I remember getting it at, I don’t think many people did buy it, but otherwise, he’s another clone pilot. The droid is nice, but just a recolor and a dark-red head, and we’re starting to get to astromech saturation point on all the colors. In other words, this short is about as “meh” as its source material. not terrible, but not spectacular either. 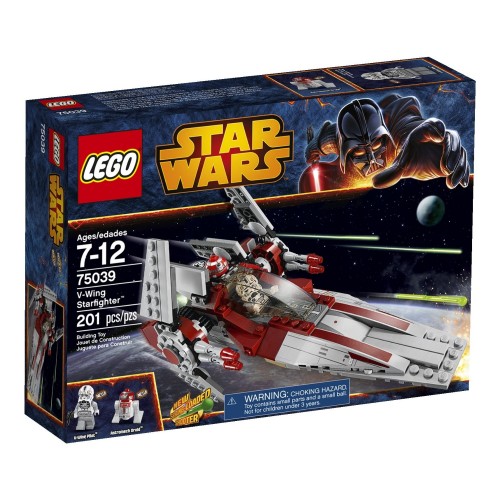