Sometimes, your first impressions are very wrong on a set. Like when I built the most recent Republic Gunship and was very impressed with the updates and overall feel of the ship. Or how nice The Lego Movie sets turned out, despite me not being impressed on the initial scenes. Just saying, sometimes a set can surprise you.Â Then again, sometimes your first impressions are spot on. I still think the most recent Sail Barge was a let-down that was only made worse by play features that made no sense (it was like buying a Superman action figure that comes with special battle armor and a sword… why does he need any of those things?).

This set, Spider-Trike vs. Electro, manages to do both. My first impression of the set was that it looked dumb and a bit too small, but wow, that transparent head on Electro looks slick. After purchasing it, and building it, I can say that I was wrong. It isÂ way too small, exceedingly dumb, and perhaps one of the worst sets for the value that I’ve ever built. Somehow, I managed to overestimate a set that I already had low expectations before.

I’ll just warn you now, this set will be rough on this glorified polybag. I’m going to scrounge for some good things that don’t involve Electro or getting 5 force lightning bolts… but it won’t be easy. 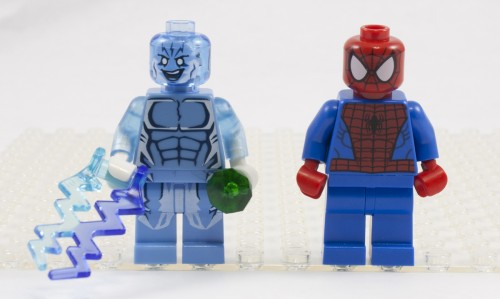 We get two minifigs in the set, so that’s the first thing that sets it apart for most polybags. 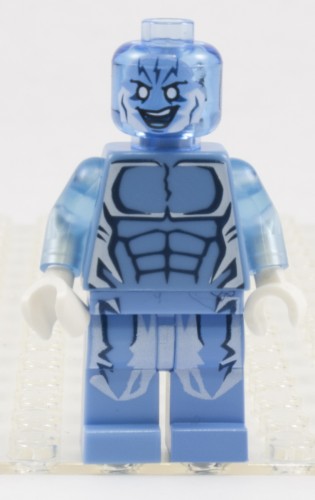 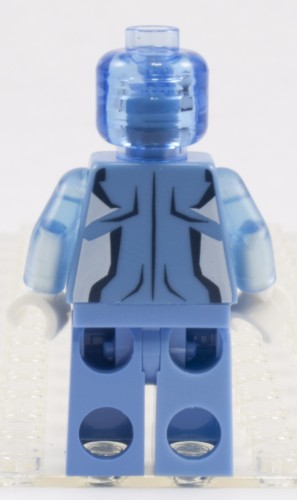 My natural instinct on this Electro is to talk about how it doesn’t look at all like the Marvel Comic character or enough like Jamie Foxx, despite knowing full well that it’s based on the Marvel Ultimate Spider-Man figure. Mostly the reason I want to do that is because it will drive Ken (buriedbybricks) crazy, and that’s something I always enjoy doing.

As a figure, he’s actually quite nice, and the trans light blue arms and head are just great. I’m waiting to see that head reversed and mixed with some helmets or the like to make some cool space figures or robots. The body strikes me more like Iceman than electro, but that’s probably because I don’t read the Ultimate comics. 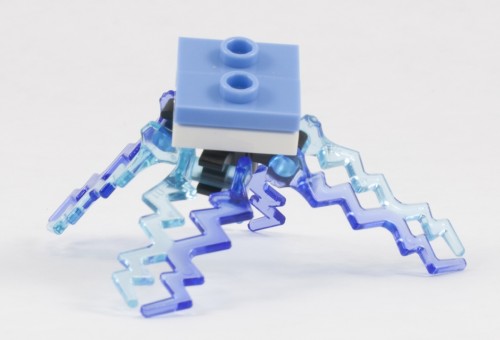 he comes with a little flying disc thing that shoots electricity or something. I don’t quite get the “science” of something like this, but it is cool to get all of those force lightning bolts. They aren’t as rare as they used to be, but it’s one of those parts that’s always fun to have more of. 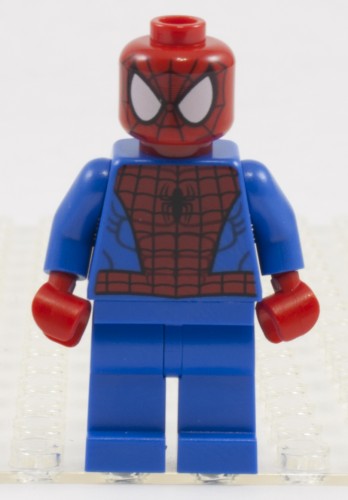 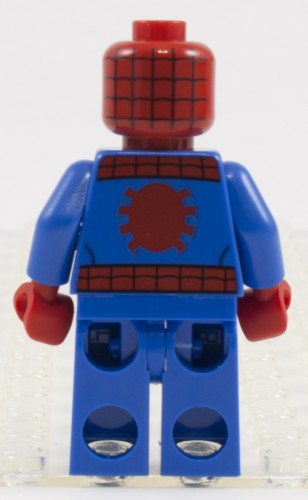 The other figure is Spider-man, who is identical to every other version of Spider-man that’s come in Superheroes sets. It’d be great to see something different, or some variation, but as it sits, this is just more of the same. And if you don’t have a Spider-man figure yet… there are far better sets to get him in than this. 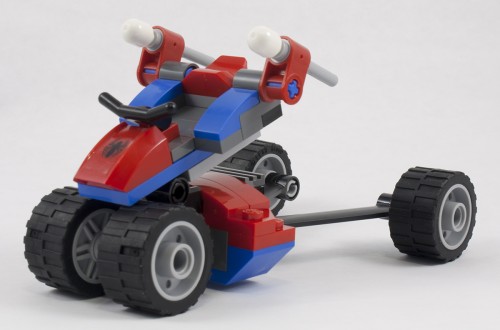 I’m going to steal a line from our chat-slacking murphquake (though I’m going to clean it up because nothing he writes can be posted on our family friendly site): “trikes have three wheels.” Trike is short for tricycle, tri being derived from the Latin word tres which means THREE! I mean, not even that special math they teach in the “everyone is a winner” schools would let you confuse three and four (you have to get to numbers where you run out of fingers and toes for that to fly). 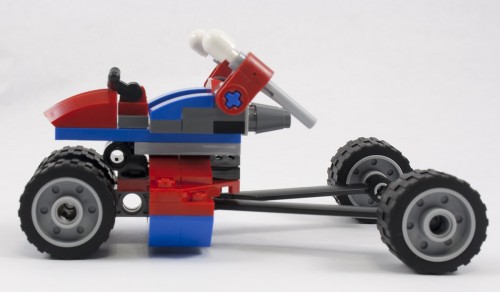 More than that, why does Spider-man need a trike to get around. New York Traffic is terrible, so it’s not like a high speed pursuit really works all that well. Oh, and he can spin webs and swing from building to building using his superhuman strength, agility, and coordination, moving far quicker and easier than a stupid trike can take him. I used up my Superman’s Battle Armor joke in the opening, but the point remains. 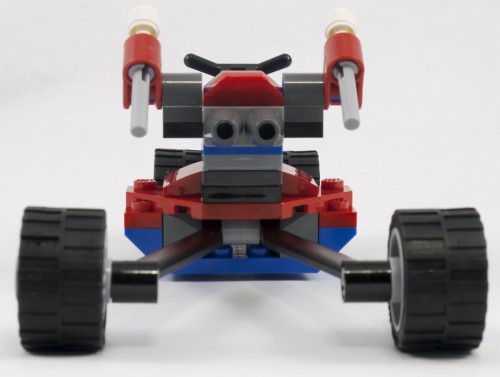 Those complaints about the purpose of the trike, as a build, this thing is just awful. The set comes in with 70 parts, total, for $13, the price of most small sets or battle packs. For those keeping score, those sets sometimes come with a similar piece-count, but include multiple minifigures that are designed around army building. This thing you buy once, and once is already too many times. You can also swipe off about 15 of those parts just on the minifigs. 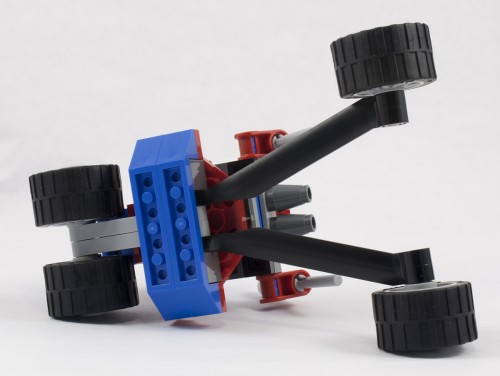 It’s really just half a build, since the back half of the not-a-trike is just a couple of technic bars that attach to wheels. There are a couple interesting parts, like the new short 2×1 curved slopes in blue or white Bionicle eyes, but that can’t make up for just being a lousy set overall. I mean, when the flick-fires are one of the highlight points of your build, you’ve turned a very bad corner. 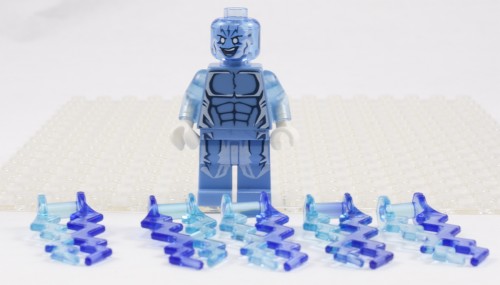 When you break the set down, the stuff above is what you’re really paying for. As a build, there’s better quality in pretty much any polybag, and much better things to spend your $13 on. There are three new battle packs in Star Wars at the same price point, one great and one okayÂ (but vastly better than this) Movie set, and stuff in City, Chima, and Ninjago that’s all a better value than this. The only reason to get this set is if you want Electro and you don’t want to go on the aftermarket. But once these sets are more widely available, this guy will end up cheaper, with shipping, than the set.

This set is one of the most profoundly disappointing sets I’ve built in a very long time. While there are sets I didn’t enjoy, this one I just flat out hated. Value is a very subjective thing in sets, and the era of the 10-cent ratio is long past us for the most part. But this set fails on so many fronts. They could have offset the low piece by making a creative build, but the trike is just lame. They could have given us some unique figures to add value, and they gave us a good figure in Electro but just gave us the same old Spider-man. In short, unless you really want Electro, spend your $13 elsewhere.

Verdict: 1 of 5. This set isn’t worth it unless you get it so heavily discounted that they’re basically paying you to take it. If you decide you really want Electro, you can pick up 76014 Spider-Trike vs. Electro at Lego Shop@Home right now. 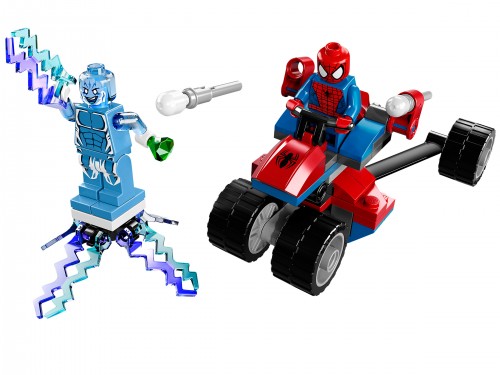