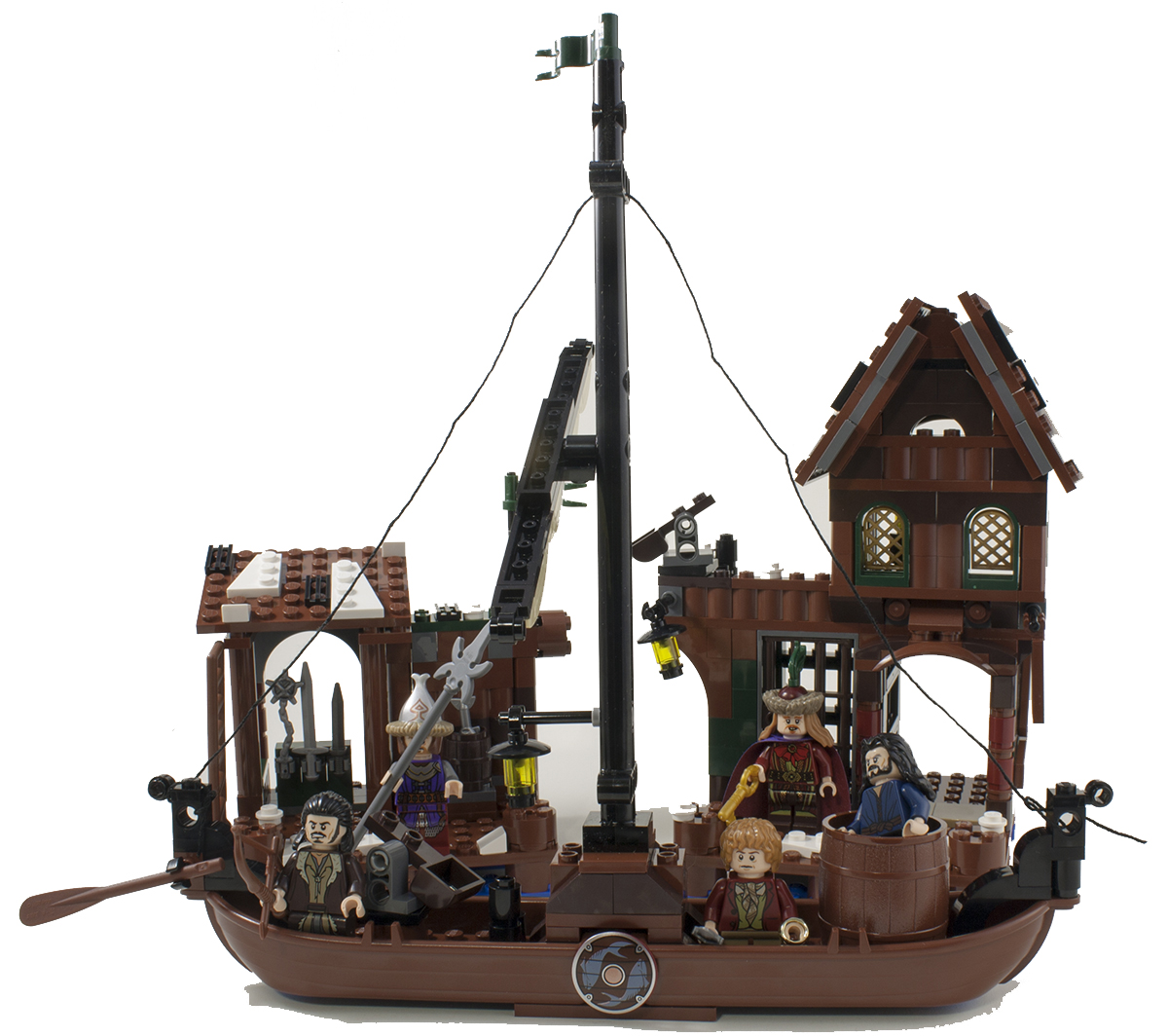 My feelings on The Hobbit: The Desolation of Smaug are on the record, and my feelings about two other sets, Mirkwood Elf Army and Dol Guldur Ambush were about as varied as you could get for two sets. I actually built this set around the same time as the other two, and shortly after watching the movie in theaters. But the review hid from me, because we were overwhelmed with the amzingosity that is The Lego Movie (and I had a whole bunch of sets to review for it)… so this sort of got forgotten.

This was actually the first set we had as a preview for the upcoming sets, revealed at San Diego Comic Con in-between all of the minifigure gnashing of teeth. It was a bit of a letdown, if for no other reason than it wasn’t as amazing as the reveal the year before, An Unexpected Gathering, unquestionably the best set in the theme. Once you get past that though… it’s still a little bit of a let-down.

At $50, the price isn’t as high as Gathering was (that’s reserved for the “not even in the movie” Battle of Dol Guldur), but when you look at the pictures for this set and, say, Mirkwood Elf Army, they look almost identical in size. They’re not, but it’s hard to shake the impression tha the set doesn’t give a whole lot. And yet, there is one thing that you’d think could redeem any set, and something that could certainly make me buy a set I’d otherwise be inclined to ignore. Three simple little words…

Okay, that’s not true, I thought that Stephen Fry did a fine job as the Master of Lake-town, but was sorely underused in the movie (there is no such thing as “too much” Stephen Fry). But the set just can’t seem to dodge the feeling that you’re not getting a great deal of value for your money in this set, especially given what else you have in the line. 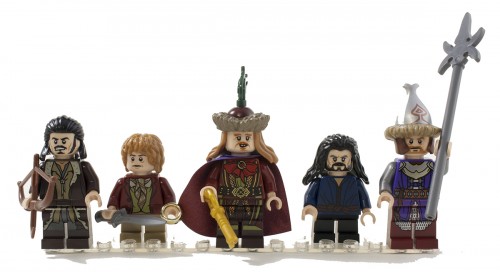 We get five minifigures (for those keeping score, one less than Mirkwood Army): Bilbo in a Red Jacket, Thorin without armor, Bard the Bowman, the Master of Lake-town, and a Lake-town guard. 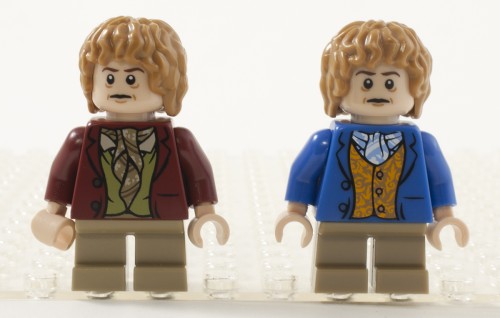 This is the same Bilbo figure we got with Riddles and Barrel Chase. Not all that much special, and honestly, not even that important to the scenes in Lake-town. Everything in these scenes revolved around Bard, the Dwarves, elves for some reason, and The Master and his “not-Grima, honest” henchman. 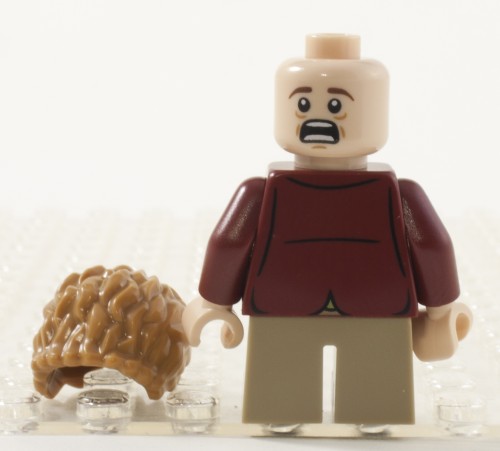 Barrel Chase, sure, that makes sense, but his part was basically done at that point, up until the sixteen hours of dragon stuff (that’s what it felt like, anyway). 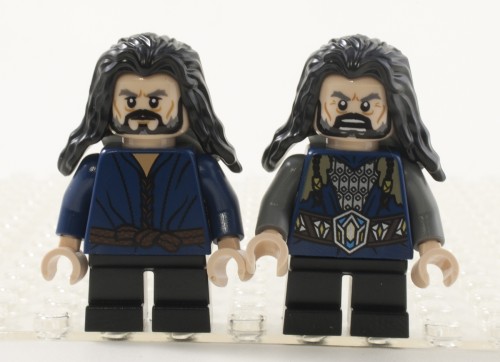 Thorin is a new, unarmored torso for the figure that came in Warg attack. I’d like to get all excited about it, but between the number of dwarves or the fact that his character is fairly uninteresting in the movie, we’re left with a guy. 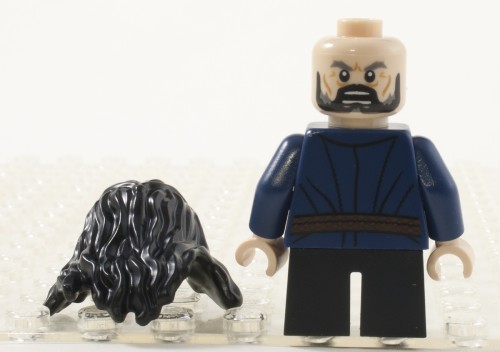 For parts, not a bad mix at all, since he’s the dwarf with a printed beard and not a molded one (there are others but I’m too lazy to go look them up). 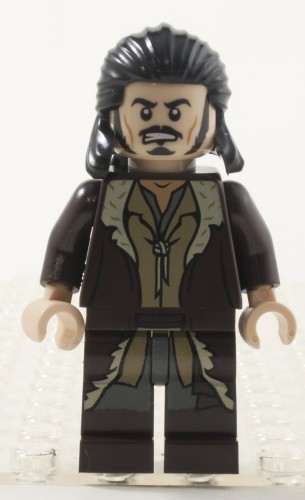 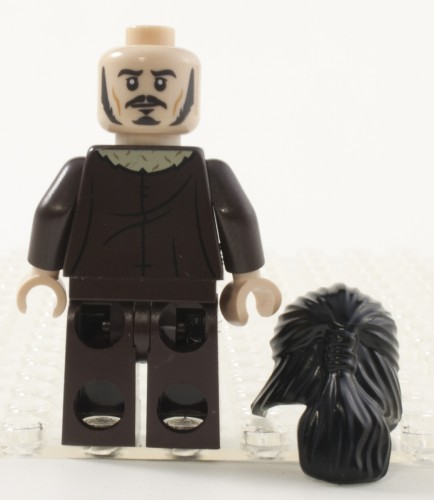 Bard is… well, Bard. Look, bad jokes are tough to come up with after awhile, and I’m out of stuff to make fun of The Hobbit on. The torso for this figure is nice, and and could be used in a lot of different builds. It’s almost got a bomber-jacket quality, even if the shirt printing doesn’t quite fit. But put on the right accessories and it could work. 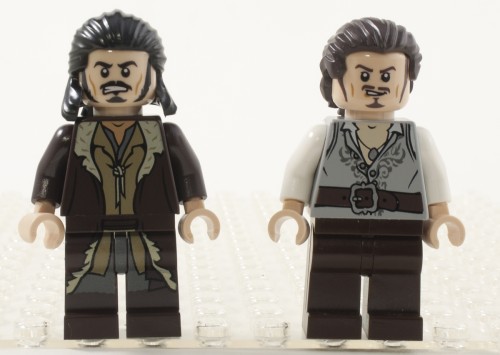 If this was a Wil Turner figure, this is fantastic. I guess as a Bard the Bowman figure, I suppose it’s also good, since he looksÂ exactly like Orlando Bloom. The printing is pretty interesting, a nice long coat and printing that even matches up! 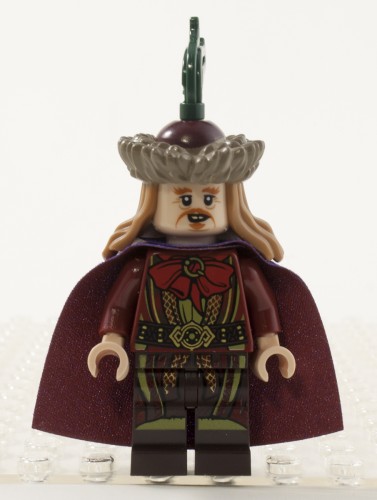 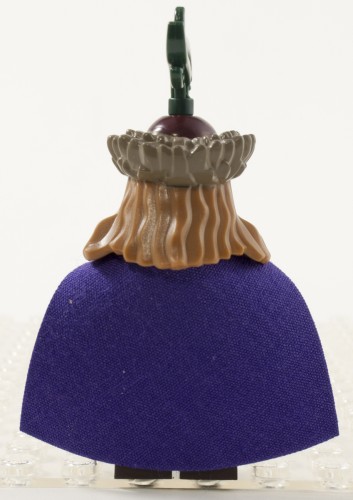 What can I say about this? Stephen Fry!Â Is it clear that I have a real infatuation with Stephen Fry?Â As a figure, this captures his turn as the Master of Lake-town quite well. Shifty, kinda oily, and those teeth.Â I’d make a joke about it being some American stereotype about British teeth and all, but Peter Jackson is from New Zealand. I don’t know what jokes they have for the British, probably something about hamburgers.

The printing on his torso is elaborate like Bards, and if it weren’t for the big bow printed on the top. As the character in the movie, I think it’s great. But as much as I like him, he, like so many characters, was sorely underused. The big problem is just sheer number… as a book, The Hobbit had too many characters, so a lot of them were marginalized or pushed to the margin.

They’ve tried to solve that problem by adding more characters, which means even more are pushed into the margin. Bombur has been the fat-joke in two movies now, and has yet to have a line of dialog. The Master has had more lines, yet was set up as a little-bad that basically a less-slimy version of any politician active today. 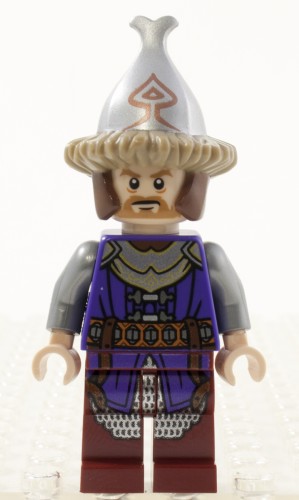 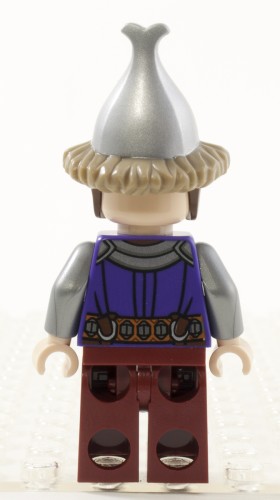 We also get a guard, which would have added a lot of value to this set had he not been added to a polybag as well. If you were just jonesing to add some Lake-town guards, this guy is for you, but get extras in polybags to build it up. He’s not a bad little figure, and decently generic. And I like purple, so that’s always good for me.

The real issue is that the armor and helmet, while generic to a figure, are not really generic to a setting. There are some styles where these guys could fit, but not many that I’ve seen out there. He reminds me of the figures from the Harry Potter Durmstrang Ship, which even though they were named figures, were generic and I thought could go anywhere. Had those things for close to a decade now, and I’m pretty sure they’ve never left the parts bins. 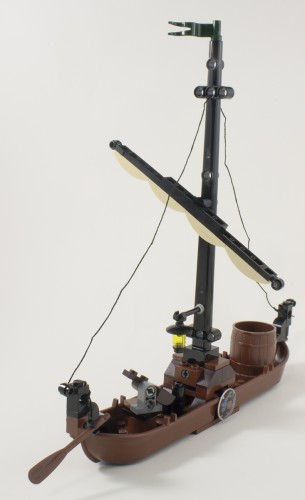 This set sort of has a mixed focus, with the boat that was used to sneak the dwarves into Lake-town as a centerpiece but also a couple of buildings that I guess represent the big floating city. The jail figures in, kind of, at the end of the movie, with Bard stuck in there and about to be turned into some crispy bacon. The boat is really where we first meet him, and it’s not a bad little scene, even if it’s into some big-time angst and setting up the whole tacked-on rebellion/oppression/prophecy thing.

As a boat (or a Bat, for Don only), it’s pretty simplistic, almost an exact copy of the Lego Vikings set,Â 7016 Viking Boat vs. Wyvern Dragon, with the addition of a sail and catapult (and the loss of some absolutely terrible oars). We get a single barrel, which by my count puts him like 14 short. You can put Thorin in there (or Bilbo), or grab some of the other dwarves, but the barrel just highlights the fact that this thing is just way too small, and this comes off as a very lazy fix. 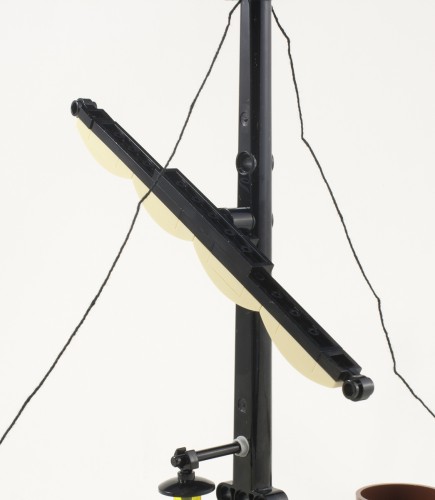 Like I said above, there is a sail added to it, which is somewhat unique, with the tan rounded tiles. It’s a somewhat ingenious solution to the sail problem, and is probably the only unique building element in the set. 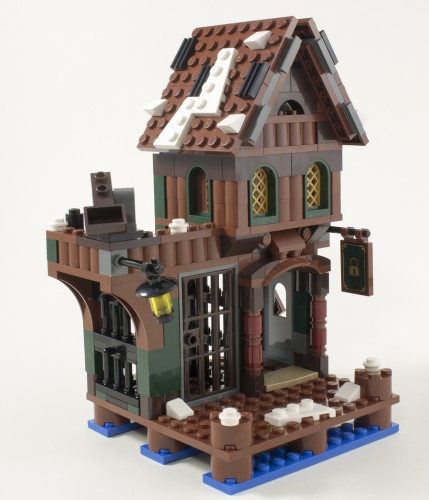 The set provides us a jail as the largest building, which is fairly strange in the grand scheme of this set. It’s supposed to be Lake-town Chase, which I would have assumed was about the dwarves trying to break into the armory to equip up and get into Smaug’s lair. Why they needed weapons when their plan was to sneak in and steal the Arkenstone and avoid a battle is anyone’s guess. That and what good were weapons when the scales couldn’t be penetrated by them… but I digress. My point is that the jail doesn’t figure into the chase at all, it’s seen later holding Bard and that’s about it. 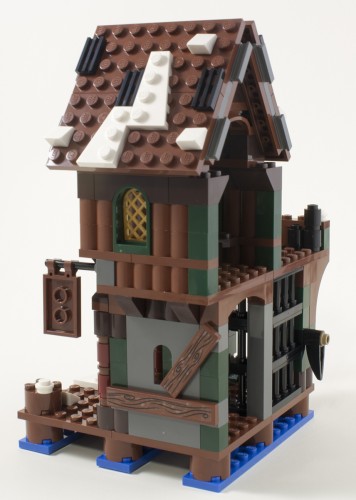 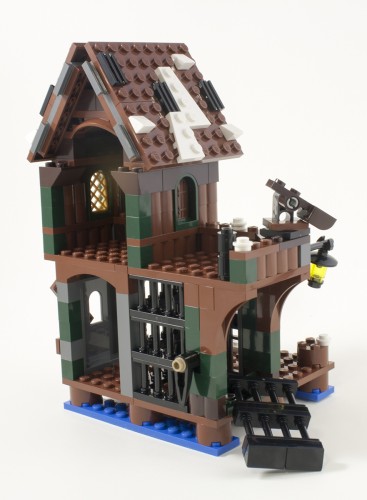 The big issue with the building is that it, much like the boat, is just a copy of other stuff. In this case, it’s kind of a fusion between the jail from Colby City Showdown, complete with the lever to knock it off, and the tavern from Pirate’s of the Caribbean’s London Escape. We get some stickered wood, some snow patterns, and it’s on “water” plates instead of just the ground, but it feels distinctly like I’ve built these things before. 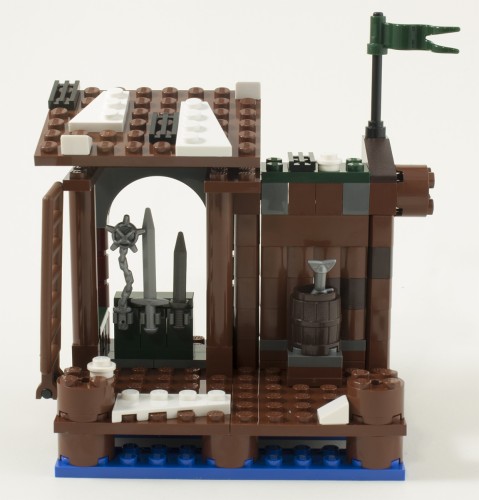 There’s a smaller building which has a weapon stand, which i suppose is the armory that the dwarves are trying to sneak in to. That or it’s the place where Bard gets stopped for inspection with the fish at the start. Scattered sets trying to capture more than one scene aren’t anything new, but this one seems to be trying to capture more than most, and it doesn’t do any of them even remotely well. Three weapons and a fish is nice here, but otherwise, the whole thing is unremarkable. 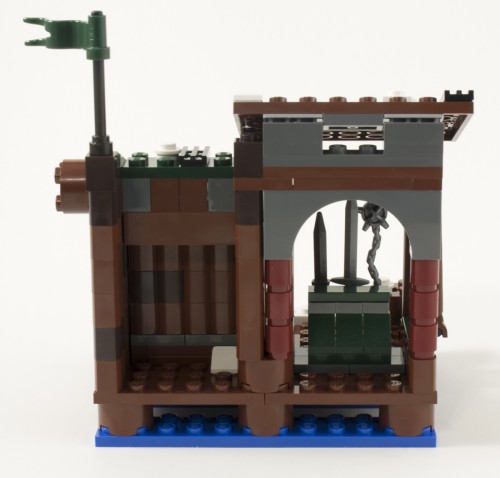 It is set up so you can sort of open it, but that’s just a “okay then” kind of feature. By the time you get done building this set, you’re looking around to see if there’s anything else.

The little bonus in the set is that it comes with a whole lot of extra parts. An oar, some small stuff, a couple of one rings, and an extra key. These aren’t reason enough to get the set, but if you have the set, it gives you something extra.

Instead, this set is underwhelming and feels overpriced. It doesn’t deliver on anywhere near the value of Mirkwood Elf Army, and there are a lot of sets in that $50 range that could take up your money. It has a few interesting parts, but nothing about the build is unique, interesting, or even new. Castle collectors know this sort of feeling well, since Lego has been re-releasing the same sets over-and-over or the past decade, but it’s sad to see one so phoned in on a young theme like this.

Verdict:Â 2 out of 5. It’s not worth the money, and the only entirely unique figures are The Master and Bard (Thorin has a unique torso). On a deep sale, this justifies itself as a parts par and minifigs, but at full price, it’s just not worth it. Just go get a couple of Mirkwood Elf Army instead. But hey, if you want it now, because Stephen Fry and all (which I obviously won’t judge you for), you can pick it up right now on Amazon.