Sometimes, it’s fun to just sit back and pretend what’s going through the heads of TV show writers and producers, because you sort of just wonder what insane stuff goes on there. I’ll just skip past all of the drug and money jokes, because this is a family site (at times). It had to be especially tough to write things for The Clone Wars, because there’s considerable evidence that they were hamstrung by just about every bad idea to ever spill from George Lucas’ noggin (see, midichlorians).

Producer: “You know what the kids love? That red Santa Claus looking guy from Episode I.”
Writer: “Darth Maul? He died at the end of that movie. Obi-Wan cut him in half.”
Producer: “What the heck is a Old Boy Juan?”
Writer: “He was the main Jedi from that movie, the one who found… you know what, never mind. He died too.”
Producer: “We should bring Darth Maul back! His death was pretty ambiguous, right?”
Writer: “He was cut in half.”
Producer: “See? Ambiguous! It’s the future-”
Writer: “Actually, it’s the past. Long time ago, in a galaxy far… never mind. But we already replaced him with his older brother, Savage Opress”
Producer: “I love that guy! That name was my idea I know, it’s subtle. That’s why his last name is slightly misspelled.”
Writer: “Yeah… so we already have someone in that role”
Producer: “He’s yellow, kids hate yellow. They like red. They see him and they think ‘wow, it’s like Big Bird.’ Big Bird is yellow, and kids hate Big Bird.”
Writer: “What?! He’s one of the most popular children’s characters ever. Everyone grew up watching-”
Producer: “I’ve got it! We give him Robot Legs! That way he’s a robot and red! It’s brilliant!”

At least, that’s how I imagine it going. Because… Darth Maul with robot legs. I know, I know, it was touched on in the comics, but the comics are to canon and the EU the same way that Twilight is meaningful source material to any Dracula movie. They gave us a white-armored Vader in an awkward pose with his daughter, after all. The Clone Wars are firmly in the EU canon, though, which gives this some sort of legitimacy.

At $25, the Mandalorian Speeder joins a less-than-illustrious group of Â speeder sets from the last few years, most inspired from the Clone Wars. It gives us two MandalorianÂ Commandos, a half-AT-RT, half Zabrak Darth Maul. But it’s in a price point that competes with the BARC Speeder, A-Wing, and Desert Skiff sets (and it’s not too far off from several great $30 sets). 211 pieces is perfectly average in something like this, so hopefully, there’s something to carry this set.

I’ve still never watched an episode of the Clone Wars, so everything I have to go on is stuff from that hive of scum and villany, Wookiepedia. It did have some nice pictures of Darth Maul with the legs that lets me know this thing really doesn’t look the part, but not so much on the Mandos or the speeder. But hey, at least we get legitimately dangerous Mandalorians this time, and not Boba “Paris Hilton of Star Wars” Fett. I guess he’d just be a kid at this point, so maybe he’s more like Justin Beiber. Young, everywhere, and only dangerous to your patience. 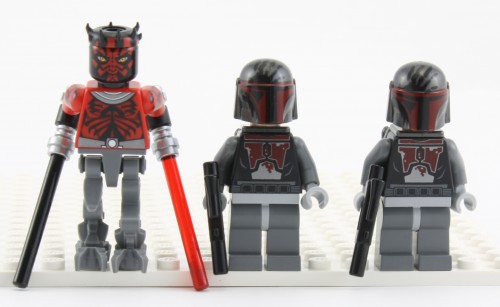 I’ve already used up all of my jokes for the minifigures, so take a look at them up there. Two identical Mandos, Darth Maul with a black saber for some reason, and a couple of blaster. 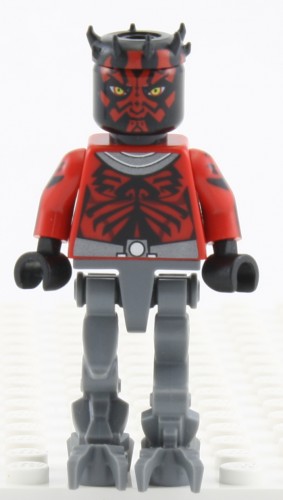 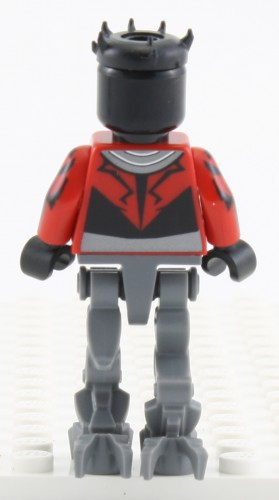 This is kind of like a fusion Darth Maul. We get the head that’s very similar to the one introduced with the Sith Infiltrator back in 2011, but more Clone Wars (read, worse). The torso is similar to the shirtless Maul that showed up in polybags and a Toy Faire handout (a figure that I have actually never bothered to pick up), but with a necklace or something printed on. The necklace look absolutely terrible, since it’s only on the front and back (not the top) and seems very out of place. I’m sure it fits into armor or something, but since we’ve already established that beingÂ cut in half isn’t fatal to Darth Maul, what is he worried about? The color between the torso and the head also looks off, with the switch to red on black to black on red. I don’t know which color he’s really supposed to be, but it doesn’t look right either way. 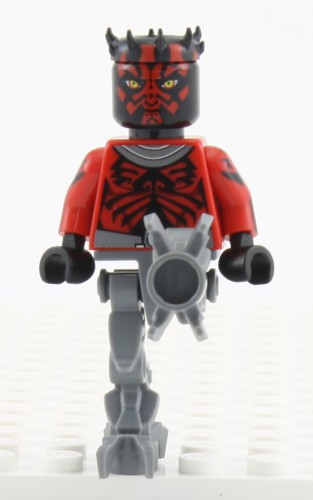 The legs are really the focus thing here, and it creates an interesting problem. As a part, these legs are awesome. As a minifigure, robot Darth Maul… not so much. He looks too big by comparison, especially when I take a look at the pictures of how he should look in the Clone Wars screenshots. He’s not quite a full head taller than a standard minifig, which is strange. Maybe the legs changed between when they were first introduced and when he got his butt handed to him by Sidious, but they just seem strange here. 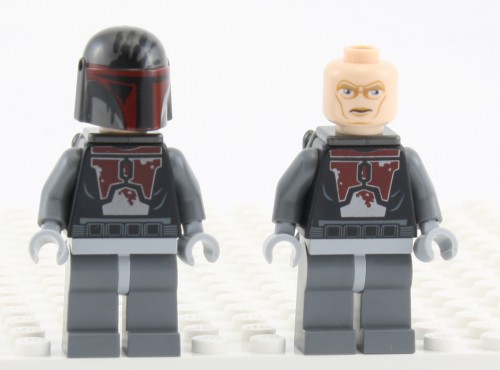 It’s always kind of sad when the best minifigure in a set is overshadowed by the most flashy one. The Mandalorians, outside of Boba Fett, are actually very, very cool in a lot of non-traditional places. They were a common “bad guy” in the Knights of the Old Republic series (and showed up again in The Old Republic), and there was actually quite a bit of story to them. I’m actually sort of curious how that works out with the Clone Wars cartoon (just not enough to actually find out by watching it… yet).

Then again, these things are calledÂ Super Commandos, so I may never want to know. What’s their elite version, super-duper commandos? They’re Mandalorians, you’d think there’d be a better name or something here. I guess the super part is that they were marked as Uruk-hai by Saruman, except this time he used black ink. That makes sense, because when he showed up here, he always wore black outfits. Okay, probably not, but the printing is the same. It’s actually a cool effect, but I kind of wish it wasn’t there. I have a lot of the blue Mandos from the battle pack a couple of years back, and would like to mix in more variety without extra adornment.

The face is the same as said Mandos from that battle pack, which is kind of like an older version of the Clone Troopers face. 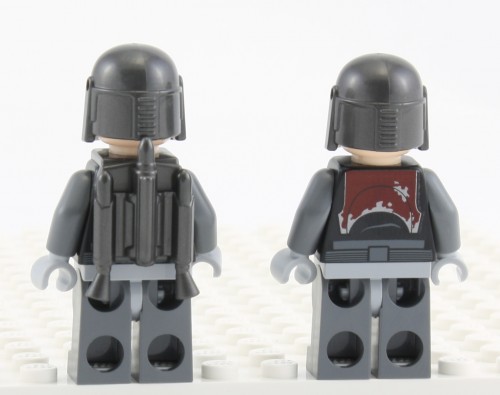 They both come with jet packs in pearl dark-grey, which might be the best part, along with a dark-pearl helmet. We get torsos printed on both sides, with what looks to be a tunic under some basic armor. There’s also no alt-face on these guys, which I approve of, even if you can see the back of their head under the helmet. But I suppose we take what I can get. 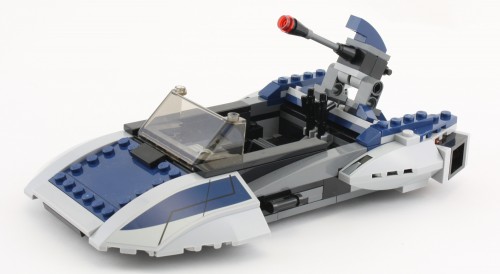 Of course, this set is called Mandalorian Speeder, so the supposed “star” is the speeder. That being said… not so much. There’s a whole lot in this set to remind me of Cad Bane’s speeder (though at half the price, which as I remember, is what they were eventually marked down to in order to sell out on Shop@Home). Did you know that there have been five different Clone Wars sets with “Speeder” in the name? Freeco, Cad Bane’s, Swamp, BARC, and now the Mando. Of course, being reminded of pretty much any of those sets, especially Cad Banes, is not a good thing.

We get dark blue in this set, which normally would be an awesome thing. The problem is, we don’t get it on the parts that we’d really like to see. Sure, small wings and what not, but on those big curved slopes? Stickers over light grey. Getting some curved slopes for building starfighters would have made this a much different set. 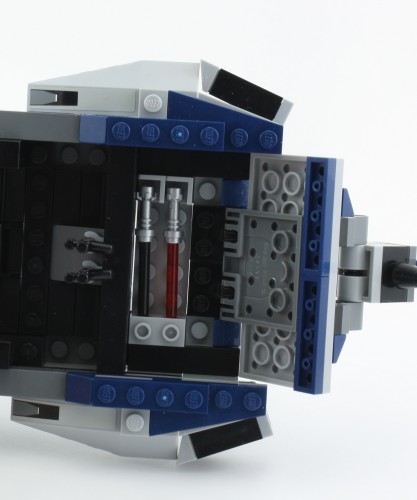 The interior of the speeder is actually built to accomodate Darth Maul’s huge Erector Set legs, so he can sit down (which is where I had him in the picture above), and the Mandos in the back. There is a storage section to put two switched-on lightsabers, so I guess there’s some really good insulation in there. You can also stow the two blaster pistols, so I guess this is an assault craft of some sort. 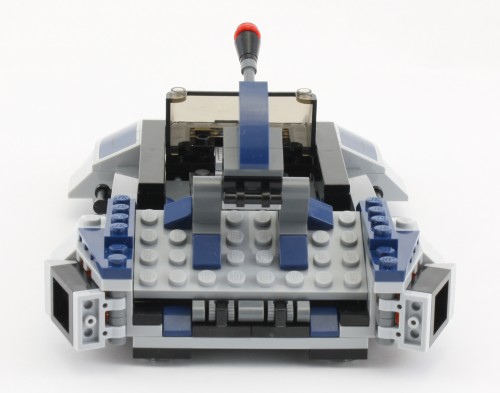 I suppose that would explain the iffy blaster on the back, which is just a bar on some swivels. It strikes me as the kind of thing that was sort of tacked on, which is a shame. I think they could have made it a lot cooler, especially if they would have turned this from a blaster into a turret for one of the Mandos. There’s enough room to make it work, and LEGO has done things like that before. It’s not all bad though, I like the little baffle covers for the engine exhausts, using windows and hinges. It’s a simple and creative solution to just hanging out some orange cheese slopes on the back. 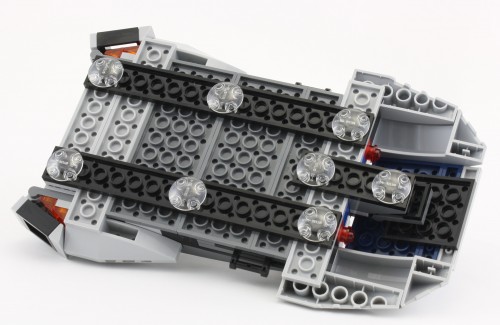 The underside is pretty much what you’d expect. You get a whole lot of trans boat sliders, if you’re into that sort of thing. There’s just not a whole lot to the speeder, overall, but let me be clear, it’s better than Cad Bane’s speeder on price alone. It’s not flashy, but at $25, you don’t really feel ripped off either. For parts, it’s okay, though we’ve gotten a lot of those curved slopes lately. Otherwise, there are tiles, jet packs, Mandos, robot legs, and some dark blue. Once this thing starts to dip in price like the other $25 sets at places like Amazon and Walmart (who get into price wars all the time), it will start to look very attractive

For figures, the Mandos are the better figure, but Darth Maul is obviously the thing you’re supposed to notice. Take those legs off, and you have a great part. Replace them with some black minifig legs, and you have a poor man’s shirtless Maul. The speeder is okay for a speeder, I guess, but not something you associate with much of anything in the middle of a battle. It also doesn’t feel very Mandalorian, probably because it has the design aesthetics of a Ford Taurus that had a spoiler bolted on the back, but as a speeder, it’s just fine. Maybe you want background for the Speeder they should re-release, but never do, from Bounty Hunter Chase, and this would be fine for that.

Ultimately, for $25 it’s not a bad set, but not a great one. If you want the figures it’s worth it, but if you’re not otherwise inclined to buy this, there are better sets in the same price point.

You can pick up 75022 Mandalorian Speeder on Amazon.com right now 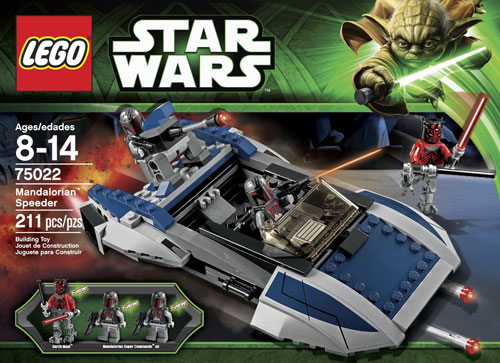