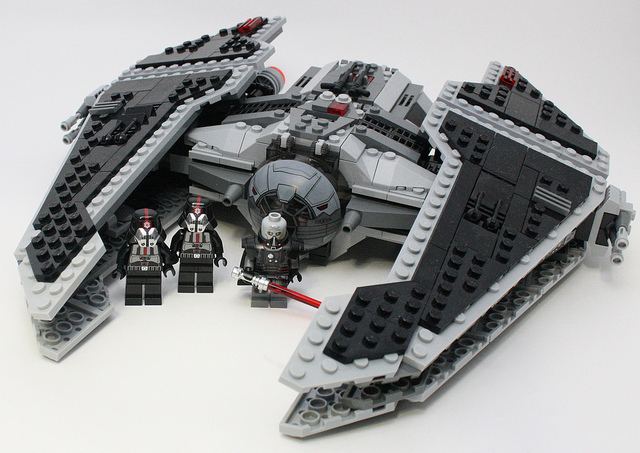 Once upon a time (okay, until like a week ago), I was a Star Wars: The Old Republic (TOR) player. But life has a funny way of getting in the way of things (baby, work, other games), and I was never really able to devote the time I’d like to the game. I played it in beta, and for months after launch. I even got a couple of characters up to 50, including a Sith Warrior, which flew around in the Sith Fury.

Okay, fly is kind of a misnomer… space is a minor and insignificant portion of the game. The “missions” you do in this ship are on-rails affairs that feel like a Facebook or iOS game more than something in an MMO, but hey, at least the ships look cool I was very excited to see Old Republic stuff hitting the lineup, if for no other reason than giving us some new minifigure variety and a break from Clone Wars.

Bioware did a good job establishing the setting around the game, including a look and feel that was a good mix of Knights of the Old Republic and The Old Republic. There’s also a lot more potentially untapped resources in the game, assuming it can actually regain some subscribers and survive long enough to spawn a few more sets.

So how does the Sith Fury stack up in the mix of so many other EU sets? At $90, it obviously is continuing LEGO’s disturbing habits of escalating prices and shrinking sets, but there’s something about this set that merits a deeper look.

The odd thing about TOR is that the Sith Empire, while being linked to the empire of later times, isn’t really the same. It’s a distinctly different beast, far more structured and cut-throat than the political empire we get in the films and EU. Yes… while I make fun of the EU all the time, I’ve actually read a good portion of it (which is why I make fun of it so much). TOR (and KoToR) before it, represented something unique, being able to create a setting and story that didn’t need a Skywalker around.

Of course, they threw in Organas, but that’s only because we had a pre-“free kitty litter for pickup” Alderaan to play around on. Spoiler alert in the game, you cannot go to that planet without wising you could slaughter every single NPC on the planet, regardless if you’re Sith or Republic. Seriously, if this is how the people were by the time A New Hope came around, that planet totally had it coming.

Between this set and the Republic Strike Fighter, there’s obviously something here. We get three minifigures in the set, unlike anything else we’ve seen before. We get the guy Sith Players are very tired of by 50 (he gives out all of the missions for instances), and the guy the Republic really wants to kill, Darth Malgus. Turns out that Darths are all really corrupted by using the dark side and being evil… Anakin just took a shortcut by taking a dip into the lava. The face is another grey-face variation for making old corrupt Sith guys, the armor is interesting, but nothing flashy. The real winner here is the cape, a single-loop, thinner affair (as compared to the two loop cloaks). It’s nice to see LEGO finally giving us a bit of variety in these fabric pieces (between this and the Ring Wraiths)… but sadly, I’m sure the next step is to start printing the things. In case you’re wondering, this is roughly how the real guy looks, compliments of the Gentle Giant statue that came with my Collector’s Edition copy of TOR. Other than that, we get two Sith Troopers, which are, sadly, NPC only classes (as in Sith players can’t actually make one). What’s funny is that, having played both Sith and Republic characters, I think I actually killed more of these guys when I was on their side than when I was fighting against them. Turns out joining the Empire is very, very bad for your health (at least three times worse than wearing a red shirt on Star Trek). They must have a killer benefits package to get recruits. The troopers are the typical “we have helmets” variety, with nice but not overdone printing on the torsos. This almost feels like throwback printing to older stormtroopers and clone troopers. Let’s hope that next year’s battlepack gives me more of these guys, because I want a ton of them. Not much detail other than that, thanks to the use of a plain black head underneath. The face should look familiar, of course… Bruce Wayne is apparently everywhere. First Loki, now the Sith Empire. I wouldn’t be surprised to see him show up as a Hobbit next. I can’t really tell you if this face is accurate, I only ever really saw these guys full of blaster holes and lightsaber slashes. The ship itself captures the “look” of a Star Wars ship better than almost any of the other EU releases we’ve seen. You could easily pick it up and drop it into your existing TIE army without a glance. It fits with main stuff and EU alike, and that’s a great thing. A big knock on a lot of the Clone Wars stuff is that it looks… wrong… next to regular sets. This does not. That’s a huge plus. Of course, if you’ve played the game, you know that all of the player ships are actually like mini little houses you can do nothing in. I’m not here to review the game, but it was a missed thing. Ships are just places, with no customization. A shame, because players like that sort of time waster. I know I do.

This version of the Sith Fury is the size of a TIE Fighter, but in the game, it’s closer to the Falcon in size. It’s basically a big space double-wide, used as a mobile base and platform. I know that system sets can’t capture the scale, but still, it would have been nicer to see this treated as something other than a basic fighter. There are some stickers to the set, but only as accents on tiles along the side. Sure, it’d be nice if they were printed and all, but not that big of a deal, given how out of the way they are.

There are also a couple of flick-fires, but they’re used like cannons, with minimal pieces. I’m not sure if that’s good or bad, but they don’t seem nearly as jarring as flick-fires usually do. Even more surprising, though, is that LEGO remembered that ships usually have bottom parts to, and actually built an underside to this ship. Sure, it looks identical to the top part, given the pylon/wings and all, but nice to have. For our Sith Lord friend, we get a small cockpit area in the front. It’s kind of cramped, but no more so than any other TIE fighter. In the game, the front section is an entire bridge area with a seat that’s offset slightly from a display console. They captured that slightly in how the computer is positioned, and did give us a touch more interior than any other TIE, but it’s still pretty sparse. Sadly, to fit Malgus in here, you have to do some creative cape bending (or just take it off). We also get a back section of the ship we get a small cargo area and a modeled hatch that reveals a small troop area. This is reallyÂ reminiscentÂ of the Imperial Shuttle sets that had the Emperor and his poker buddies (I know they were called Imperial Guards and all, but given that the only time we saw them was when they took a coffee break and then failed at their only task…) seating area. There’s no slide-out section this time, just some standing room only, showing off the future of “convenience free” design that gives us no-railings in the Death Star. In truth, the hatch cover was just a way to feature the most prominent feature of the ship you’d see as a player. Seriously, you run in and out of that thing more times than I would could. MMO designers love to invent a lot of needless time-sinks into games where you run from place to place for seemingly no reason other than someone wanted you to run around, and The Old Republic was the absolute king of that. It wasn’t until patch 1.3 that they made it possible to go from your ship directly down to a planet… used to be at least two loading screens just to get down to the area where the game really was.

In the end, this set is a heavy, well designed, fun built experience. Seriously, this set is just fun to build. The use of technic loops at the front is a bit weird, but also interesting. It’s also unlike anything else that’s been built, though it can remind you of some old builds a lot (like the Imperial Shuttle when putting the troopers in the back, or TIEs when building the wings). It gives me hope that we’ll see some of the other ships show up from the game (especially the Bounty Hunter ship, or maybe the Smuggler one). It’s expensive, but at least it feels like you get something. Something compact, no doubt, but pick it up and you know it has substance.

On one hand, it’s a terrible representation of the ship it’s based on. it’s too small, too compact, and missing the character of the set from the game. Take that away, however, and you have an excellent vehicle and set, that by itself would be great.

Verdict: Buy it, especially if it’s on sale, which there have been plenty of lately.

You can pick up the Sith Infiltrator and More from FBTB’s Shop @ Home site, or from Amazon (as of this writing), on sale for $71.99 (and worth every penny)