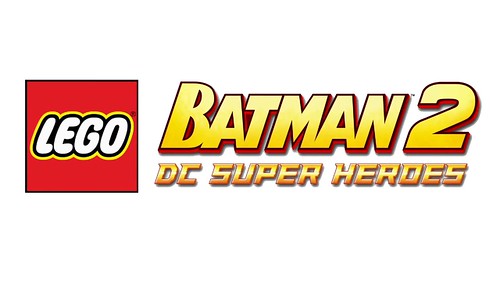 I don’t play as many video games as I used to and the game time I do have is usually reserved for old favourites and anything I can play with my son. LEGO Batman 2 falls within both of these catagories and while it definitely follows the same formula we’ve seen in the previous LEGO games, it also strays into uncharted LEGO territory with a couple of new features. I along with many of you have been playing these games for years now across their many iterations and there have been few prior changes in the grand scheme, so do these updates hurt or hinder a game that already seemed like it had the potential to be an improvement over the original?

Well the first big change is that fact that the characters now have voices. There was a certain charm in the mostly silent, grunting little guys in previous games so I know some viewed this as a big turn off. Personally, I found it very amusing and it’s not like it becomes instantly gimmicky or over used so I think it was a good choice. Besides that it was inevitable with all the new cartoons that have been popping up with more regularity that the games would need to fall more in line as these multimedia offerings begin to sync up. I’ll get back to the voices and the other major change later on as I want to cover the general gameplay first, but don’t think that because I have a soft spot for these games that they get a pass from any critical eye. Every one of these games has had it’s flaws, some more serious than others, but the vast majority have still been fun outings and at least a bit of a challenge (if you are a completionist, that is). 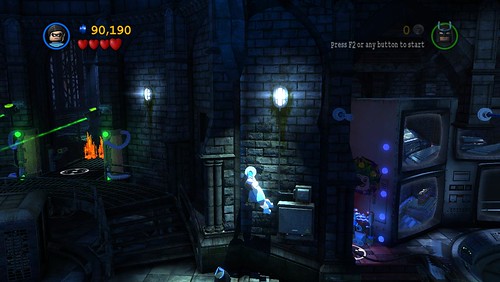 If you’ve played any of these games before, you already know the drill. You play through the levels as a beloved character with a sidekick who (unless you take control of them) is about as useful as a rookie in a buddy cop movie. You’ll smash everything you can to collect studs, search for minikits, red brick unlockables and even save citizens in peril to collect gold bricks. This game and it’s predecessor have the added task of acquiring specialized suits for Batman & Robin in order to do certain tasks and that is easily my least favourite aspect of these games. Luckily, it’s something you can work around and have a lot of fun with, but again more on that in a bit. 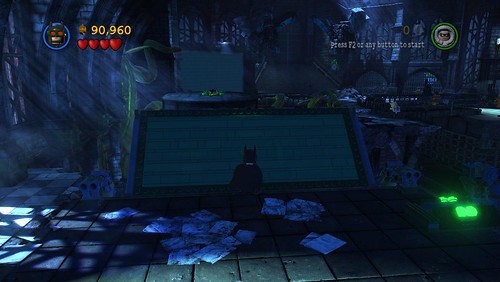 The story is simple and very tongue-in-cheek and if you’re a fan of the comics, cartoons, movies or other video games then there is something here for you. There are little bits taken from comic stories like Public Enemies, JLA: Tower of Babel and the Power Suit (my personal favourite) smacks of the one from The Dark Knight Returns. While you blow through the 15 chapters of the game in story mode you hear jabs from Vicki Vale at Batman: Arkham City and even a great bit about the generic interchangable nature of Bruce Wayne and Clark Kent. The voices may be a new twist but they chose the right property to make the jump, as these characters have had many voices over the years and everyone has a certain perception how they *should* sound. I’d say they nailed it pretty well. Clancy Brown of Superman The Animated Series reprises his role as Lex Luthor along with Kevin Michael Richardson, Tom Kenny, Claudia Black and John Dimaggio. With music from both Danny Elfman’s 1989 Batman and John William’s 1978 Superman scores, you couldn’t ask for a better superhero soundtrack for these characters. Not one word about the over-rated Howard/Zimmer scores. Not. One. Word. 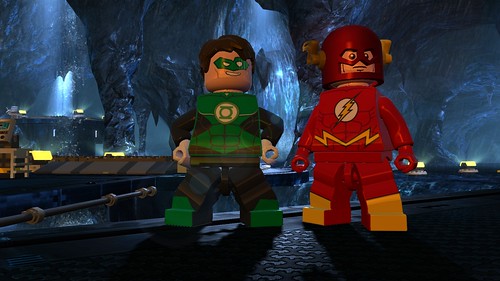 For the first half of the game you’ll mostly be limited to using only the Dynamic Duo, with the occasional Superman pop in. This is mostly due to the games over-arching lesson Batman must learn the hard way, which is not surprising because doing it the hard way is pretty much the unspoken rule of the story mode in LEGO games. Soon Superman joins the team full time and that’s when things get interesting. If your whole reason to get this game was to play as the Flash, Wonder Woman or the rest of the Justice League, you’ll have to wait until the last two chapters to unlock them and it’s questionable whether or not it’s worth the wait. As you progress, you’ll have the opportunity to add more and more characters to your collection and some of them are very important and should be given priority, while others can wait until you have more of an excess of studs. Some of the characters you will unlock are pointless and I wish they’d used those spots to design even more super heroes and villains, but I guess that will have to wait for the next sequel. 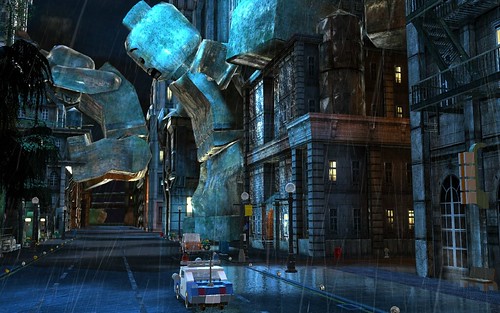 The other area that this one differs from other LEGO games is the hub. You still have your Batcave, but it’s pretty basic and it’s really just a spot to find a few unlockables, create your custom characters and because Batman needs a batcave. The real hub is Gotham City itself and it’s the biggest step the game takes in a new and promising direction. In between levels you will be given some tasks to solve in the open world of Gotham that bridge the gaps of the chapters, but it’s when you just wander around and search for the vast majority of the unlockables that you’ll either find the time spent quite fun or exceedingly tedious. 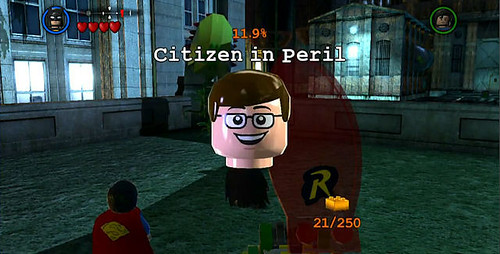 You aren’t limited to walking or taking the bus either, you can use a land, sea or air vehicle or even take to the skies as any number of flying characters. It isn’t a completely open map as it’s presented like the Gotham of the recent trilogy, split into three large islands connected by bridges. Try to fly across the water and you’ll hit that invisible wall we all love so much, so take a stroll over one of the city’s many scenic bridges and prepare yourself for loading time. Still, when you’re finally given the opportunity to freely fly around the city (you can even break the sound barrier with a double tap) it’s a fantastic feeling and John William’s Superman March strikes up everytime you take to the sky. Classic. The ceiling caps out just above Wayne Tower, but trust me that’s plenty high and if you don’t believe me head on up as high as you can go and release yourself into a freefall, you’ll have time for a bathroom break before he hits the ground. 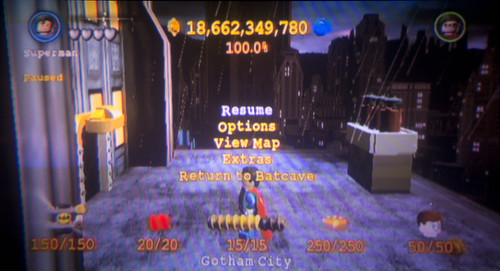 About 190 of the games 250 gold bricks are scattered throughout Gotham and some of them are a p.i.t.a to acquire, but you’ll be able to cheat your way around the puzzles they put in front of you for many of them if you are so inclined. I’d suggest holding off really looking for them until you’ve got a few choice characters in your group. I bought the game on the 21st, opened it the next day and hit 100% this past Thursday, so I was quite pleased with myself considering my weekend was sadly video game free. The quest for 100% is very important to me for some reason and I never buy a sequel until I have beaten a game in it’s entirety, so I’m ready for number three please! 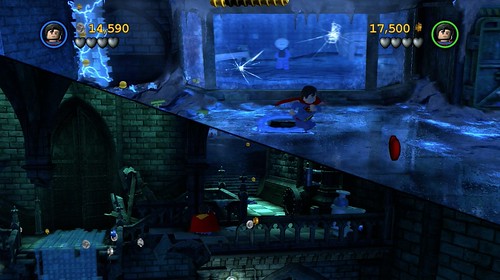 Overall, it’s a pretty fun ride, but the game is not without its flaws. Right away I noticed the frame rate dropped whenever the split screen started for two player mode in Gotham city, this may not be an issue with the HD consols, but my Wife noticed it straight away and she’s not exactly an avid gamer. Also, there was a recurring issue of other characters not being where they were supposed to be in the open world. I’d search a rooftop where I knew a character I was looking for was supposed to be and find nothing, only to give up, start to fly away and turn to see them standing right were I was just a moment before. The flying controls can be sticky and the characters have a tendency to drown in any amount of water which is at the same time hilarious and sad if you are playing as Aquaman. The worst offense in my opinion is the ridiculous way your character will freeze for about 10 seconds everytime you acquire a gold brick or other unlockable. If the game froze I would be slightly more forgiving, but the game moves on around you and you often spend the time standing, glancing around while you are pummeled by any number of random criminals roaming the streets. Terrible.

Verdict: If anything I described sounds like fun to you and if the negatives I mentioned seem forgivable in that context, you should definitely buy it. I had no problem forking over forty bucks for the Wii version and if I had a PS3 I’d probably even pay the fifty, but keep in mind the pot was sweetened for me by the exclusive Lex Luthor in his classic power armor minifigure, which I love. I’m really hoping they plan on re-releasing this on the Wii-U with all the DLC characters in the future, but I’m not holding my breath. Of course if you are hesitant at all about spending the dough now, then by all means wait until it drops to half price in a few months at which point I highly suggest you pick it up quickly, run all the way home laughing maniacally and play it with the volume cranked up to 11.
You will believe a minifigure can fly. 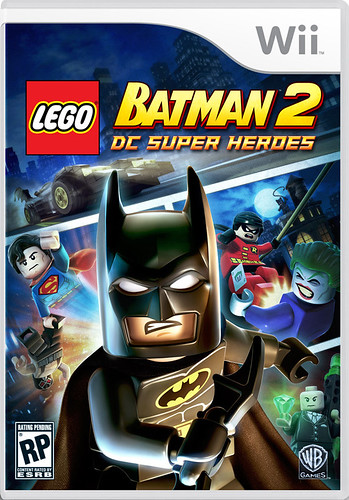