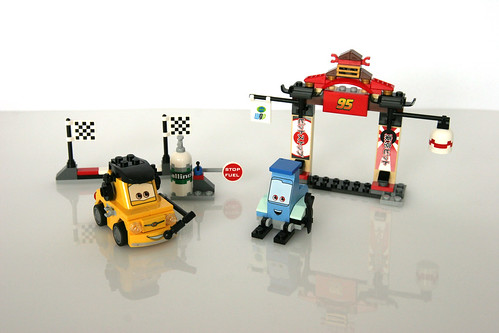 It’s a little unfortunate that the LEGO Cars theme is centered around the second movie. I personally would have enjoyed location based sets around Radiator Springs to build my own little town. But despite that, there are some expectations on how the second movie would translate to LEGO sets. I mean, you’d have to have a set with Luigi and Guido, right? And 8206 Tokyo Pit Stop does not disappoint. 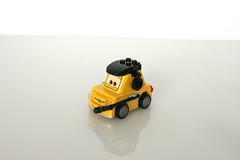 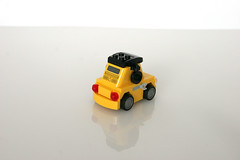 What I liked: Luigi and Guido are spot on in their brick representation. The downside with Luigi is that based on the scene that he’s representing, he should have decals on both doors with Lightning McQueen’s signature flaming ’95’. But if you remove the hat, headphones, and boom mic, he makes a great Luigi nonetheless. 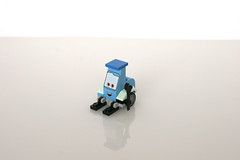 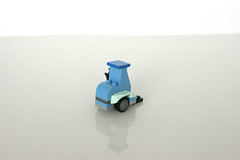 Guido is the exactly the same as the one you get from 8484 Ultimate Build Lightning McQueen but despite the redundancy, he’s cute enough to own more than one. Plus the seafoam cheese slopes are pretty. Yeah, that’s right. I said he was cute. And pretty. 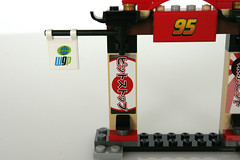 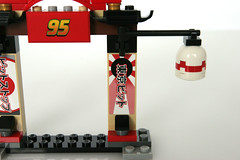 What I didn’t: The Japanese characters on the stickers used on the gate supports are sideways. Yes, sideways. I don’t know what the text translates to but I doubt it reads “This text should be sideways”. This is a gross oversight on LEGO’s part and am incredulous that such a mistake made it through to production. 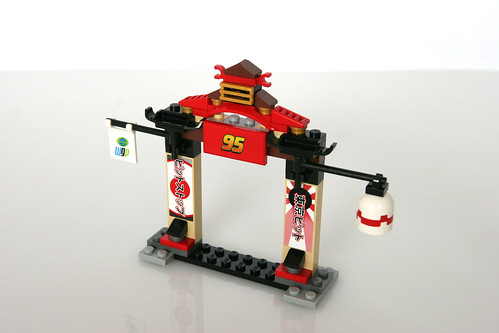 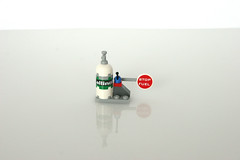 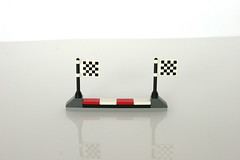 It’s not a very substantial set consisting of Luigi and Guido in pit stop mode along with a gate, a checkered flag construct, and an Allinol fuel pump. This isn’t necessarily a fault exclusive to this particular set as this seems to be a trend that will repeat itself throughout the theme. The minicars are the real stars of the sets with the requirement of a building component met by building some sort of background scene. However, these background elements are not built on any baseplate, so they are more or less “loose” and can be arranged in any sort of way. Without a baseplate to build on, the constructs can be easily knocked over which can get annoying fast. For kids that want to vroom the minicars around, these background constructions will be easily ignored. I would have liked a small baseplate to attach each of the constructs on to make it, you know, actually look like a pit stop lane.

Verdict: Not a terrible set by any means. Luigi’s only available in this set and the much more expensive 8679 Tokyo International Circuit so for completists who want to collect every minicar, it’s a nice cheap opportunity to pick up some core characters but I’d still recommend waiting for a sale to pick up the duo. 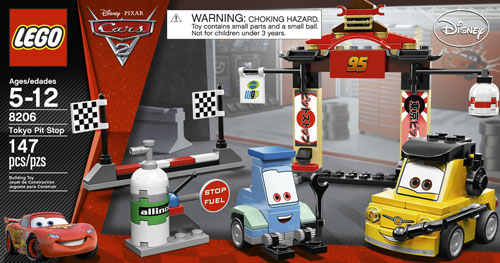