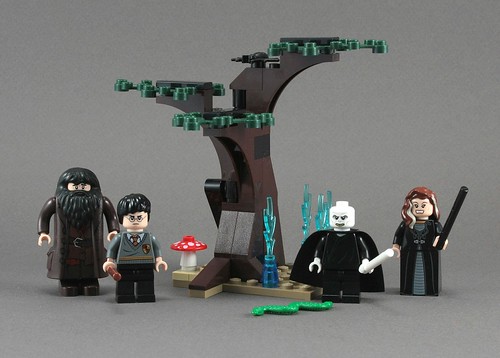 As great as the Star Wars battle packs had been in the past for building large amounts of generic characters, that standard has changed. This may be due in part to expanding the format to other themes, but for whatever reason the smaller sets have really come into their own. In many cases they have extremely rare parts and/or exclusive figures and it’s a trend I for one love, but at 64 pieces and only one exclusive fig does this set live up to this growing expectation?

For my money yes, but I’ll preface this with some honest disclosure. 1) I usually only buy HP sets when they are on sale, not because I don’t like the franchise I just find the theme more redundant than most, and 2) I have yet to see the last movie which this set is based on, so bear with me. 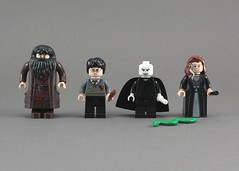 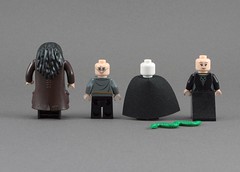 First up the minifigures. They’re the reason most people buy these sets and this set is a great way to get the key players. Narcissa Malfoy is the only exclusive here and it’s great to get not only another femfig, but the graying hairpiece is a welcome addition too. Hagrid is the same one available in two other sets, but the next one up is three times the expense and Voldemort is only available in last year’s Hogwarts Castle. The real missed opportunity here is Harry. Like Indiana Jones, PoP and PotC before, these sets are rooted by a primary character and that’s fine, but that doesn’t mean you can’t have a little variety. Without seeing this film I highly doubt that Harry went to this confrontation in the woods in his school uniform, so I plain clothes version would be in order or even a more disheveled looking shirt print could be in order. At least the figure includes back printing as does Madame Malfoy’s. While these may not be an exciting line up of figs, it is a great way to get a nice selection of the theme’s key characters at an affordable price. 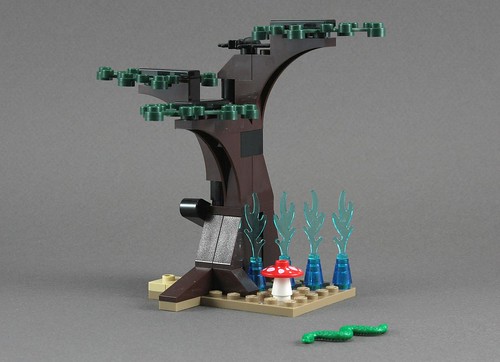 As for the build, it’s as basic as they come. You can’t see the forest for the tree with this one.
What, no rim shot?!

Fine, let’s move on. What you see is what you get, but that’s not necessarily a bad thing here. Dark tan, dark brown and three whole dark green leaves are a nice addition to LEGO’s trend towards tree based sets this year and while basic, they do have a simple aesthetic that really works for this set. The stand-out is the for four rare fire/water parts and the awesome red mushroom top which is only available in the larger Hagrid’s Hut set otherwise. 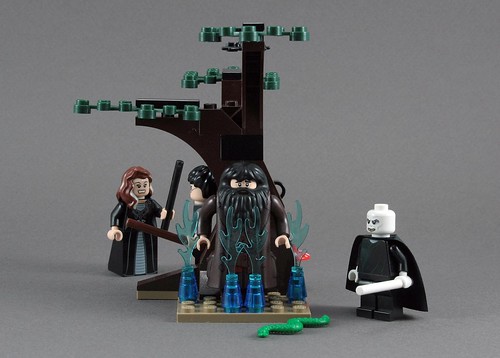 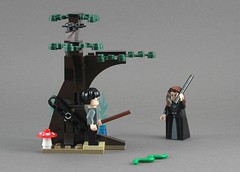 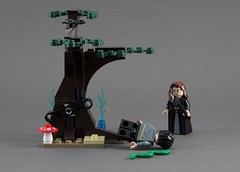 As for play features, It’s a tree what do you expect? Other than the mysteriously untied yet captured Hagrid, this set’s only option is one previously used in another tree-centric set 7188 King’s Carriage Ambush. FYI, I liked it better here. In the other set the tree lever is used to lift a large mallet, here it sends young Mister Potter flying a good distance after getting zappity zapped by whichever baddie you please. It works so well, my Son and I had a great time using it to knock down the rest of the minifigs over and over. Good clean family fun derived from a near-death scene. Now THAT’s parenting! Let’s sum it all up. 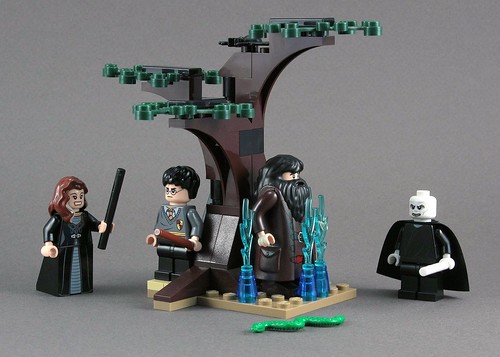 What I liked: The figures are a nice assortment if you don’t already have all the sets and if you’re looking for an affordable way to enhance your forest building efforts, you’re good to go. The price is right and if you were looking for a small gift for a Harry Potter fan, I think this would hit the perfect spot.

What I didn’t like: I think they missed the mark on which Harry figure they should have included, but otherwise the only real fault is the lack of leafy green. That stuff must be expensive to produce because they ration them like crazy. 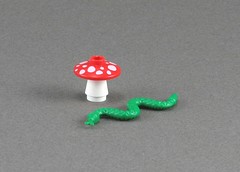 Verdict: Buy it. It’s cheap, easy and full of useful parts and peeps. Other than the Knight Bus, it’s the only set I didn’t think twice about buying and as soon as I see it on sale I will again if based on nothing more than that mushroom.

You can buy 4865 The Forbidden Forest on Amazon.com.