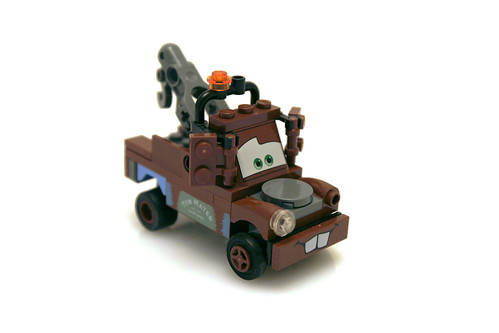 You know, it’s funny. Out of the two entry level Cars sets, I ended up loving the one I thought I’d like less.

In the LEGO Star Wars line, historically, LEGO primarily focused on vehicles and that decision was driven by market research. Boys liked playing with vehicles. That’s why you get rehash after rehash of the same ship over and over again and very few playsets. When I first got wind of LEGO acquiring the Disney license which included Cars 2, I got very excited since Cars is nothing but vehicles. And given the vast and rich universe of the movie, the possibilities are endless. So far 8200 Radiator Springs Lightning McQueen and 8201 Classic Mater are the only single vehicle sets released for the line. It’s unknown at this time if there will be more Cars sets, but if there is I sincerely hope they release more vehicles as single sets. I’d buy every single one without a second thought. It’s a natural extension of LEGO’s existing Racers line and for nearly the same price you can get a race car with a little more character tied to a successful franchise. They’d be stupid not to do it.

Priced the same as 8200 Radiator Springs Lightning McQueen, the piece count for 8201 Classic Mater is much more substantial at 52 and in the end it was quite an enjoyable little build. It, too, also features printed elements even on the flat tiles used for the front and rear bumpers. The mostly brown set also includes a 2×2 dark bluish grey round tile which was unavailable to the public previously. 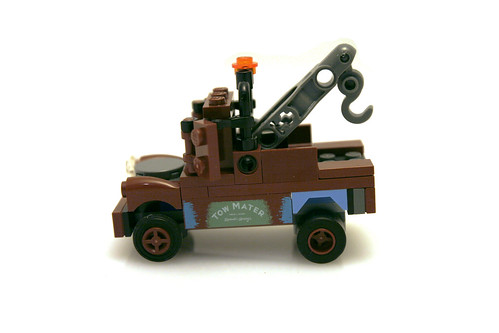 What I liked: The printing on the eyes is much whiter and more opaque than Lightning McQueen’s from 8200. Also, the printing on the 2×4 brown bricks is nice and sharp with the tiny printing legible to the naked eye. All the graphics in the set could have been done with stickers instead of printed elements, so for a $7 dollar set the cost definitely feels justified.

I liked the addition of the medium blue fender element and printing to give a hint to a Brand New Mater from a time before. It definitely adds to his signature run-down look. The fender issue that I railed on in my review of 8200 isn’t much of an issue for 8201. If anything, it’s a plus for this set. Mater is supposed to look like he’s about to fall apart, so any appearance of missing body parts just enhances this effect.

Like Lightning McQueen, the look of Mater is just spot on and for such a small set, I really don’t see how they could have improved on it. Tow cable? Not possible at this scale but that would be the only feature they didn’t include. From the broken headlight in the front to the tow hook in the back, it rivals other Cars toy makers offerings of Radiator Springs’ resident redneck for accuracy and exceeds them in playability. 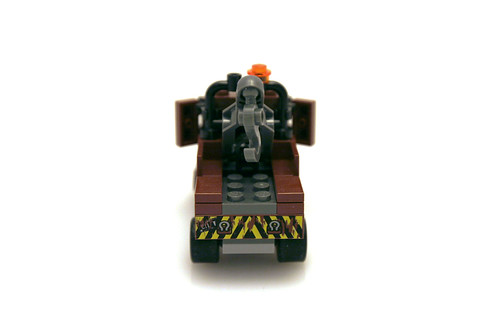 What I didn’t like: There isn’t a single thing I can find wrong with this set to complain about. I guess if I had to pick something, it’s that I wish he had a unique eye print to differentiate this set from the one you get with 8487 Flo’s V8 Cafe and 8679 Tokyo International Circuit since they are exactly the same version of Mater in all three sets. Maybe a different mouth print. In any case it’s a very minor point to complain about considering what a joy this set was.

Verdict: Buy it. Owning multiples of Mater isn’t a terrible idea since he is also a great parts pack.