The Mill is a middle of price set for the Pirates of the Caribbean line of sets. For those of you wondering about the timing of this review, since the movie isn’t in all theaters any more, remember that some places still stock Prince of Persia stuff. The DVD will come out eventually, and these things are going to appear. The Black Pearl is on the horizon as well, waiting to disappoint us! So, arrrrrrrrr. 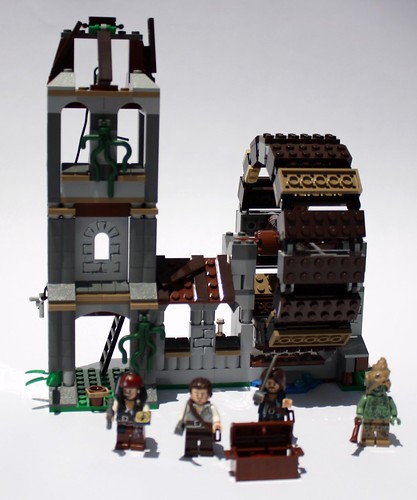 Okay, I’m going to just preface this review with a bit of background. The set is based on the scene that turned me off to Pirates of the Caribbean in the first place. I loved the first movie, and looked forward to the second with great anticipation.

But as soon as they got to that mill scene, with the thing breaking free and three people sword fighting in the most ridiculous scene ever committed to film, I realized I was over Pirates. This was going to be one of the worst movies ever inflicted on my eyes. Seriously, that whole mill thing was so absurd that even Michael Bay would have cringed. And he put Wingsuits in Transformers 3 just because he thought they were cool. Now, having said that, can this set possibly be as bad as the scene in the movie?

No. Nothing could ever be that bad. Selling us cardstock and saying “figures coming soon” wouldn’t be as bad as that. We’re treated to a bit more set than we’re used to for most of the $40 jobs we’ve seen in other lines. The Mill itself, the oversized (or maybe normal-sized) wheel, 4 minifigures, two of which are unique to the set, and some treasure.

On the minifigures, we get two that are available elsewhere, Jack Sparrow (of course) and Will Turner. Will is the same as the character in 4182, and Jack is the same as in 4191 and 4192. I’d like to think that these figures will someday increase in value the same way that Batman figures have recently, but somehow, I just doubt it. 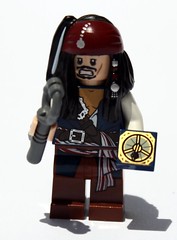 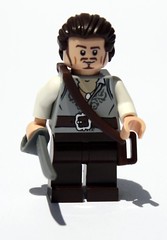 The other two are a bit more notable, the disheveled Admiral Norrington. The figure isn’t bad. I’m digging that beard and both faces on him, but the hair is just recycled from PoP. It works, but would have been nice to see him get a little more love. Part of me is quite sad that we don’t have a Norrington from the first film, because it’d be nice to see more troops and an admiral or captain to throw on my Flagship. Mostly, it’s because he was interesting in the first film, and just another greasy long-hair guy in the second film. 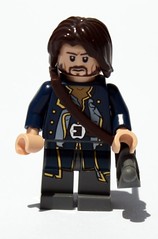 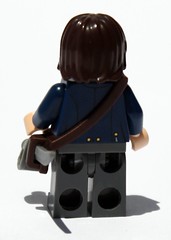 The other is Hadras, a crewman on the Flying Dutchman, and someone I honestly couldn’t even remember until I looked up his wiki entry. It all came rushing back to me, unfortunately, with the whole head-off thing trying to direct the body (how a head talks without lungs I’ll never know). The figure is done pretty well, with the shell hairpiece standing out, and printing that reflects the character. Not bad, just not a good character overall. 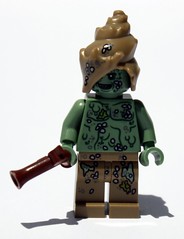 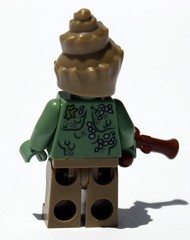 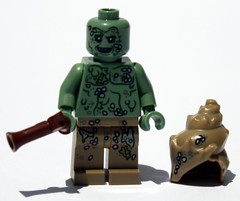 Now for the set… unlike most of the other sets in the line, this is really just one big thing, that breaks apart. It’s a bell tower that has a waterwheel on it. These together make a mill, I suppose, but I’m thinking that whoever designed this doesn’t understand what a mill is, or what a water-wheel does. According to the movie, this was really a church, which explains the bell, but not so much on the mill. Checking out some things on Google search though, it doesn’t really match the scene all that well. 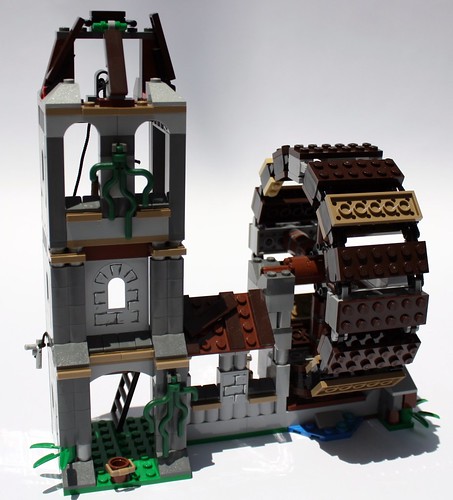 The tower is typical of modern castle sets: too many stickers and panels (like BURPs, but flat). It’s ugly and feels very MegaBloky, but that’s just how all the castle towers and sets feel in recent years. Even just some brick-built walls and windows, which they most certainly make, would have improved that. I’m not an anti-sticker crusader, but using them like this is one of the big problems with LEGO sets these days. 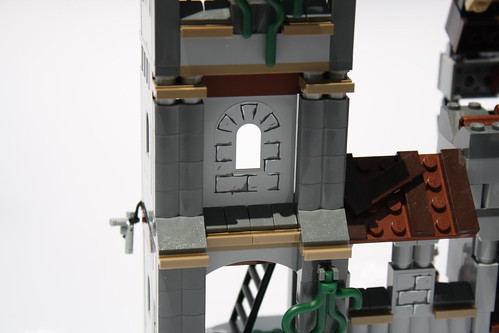 The tower is connected by a little causeway, and then has grooves to hold the giant wheel in place. You do get some dark-brown tiles, which is nice. And dark tan. So there is that. But you also have some strange choices for colors, like the green plate used to hold up the ladder in the tower. 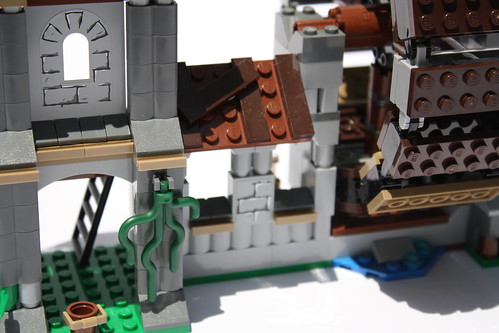 The bell at the top of the tower is different from the very nice bell you see in the Modular Building’s Firehouse. Instead of some tiles, you get stacked round plates in the new gold color. The color works, but the effect comes off as somewhat ugly. 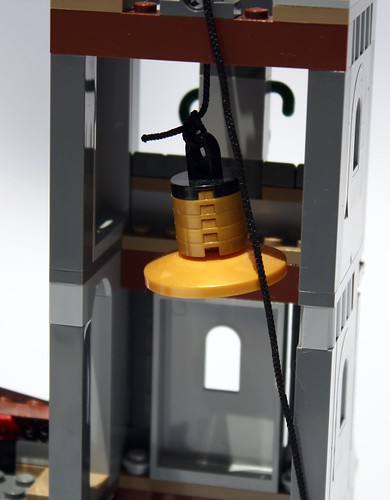 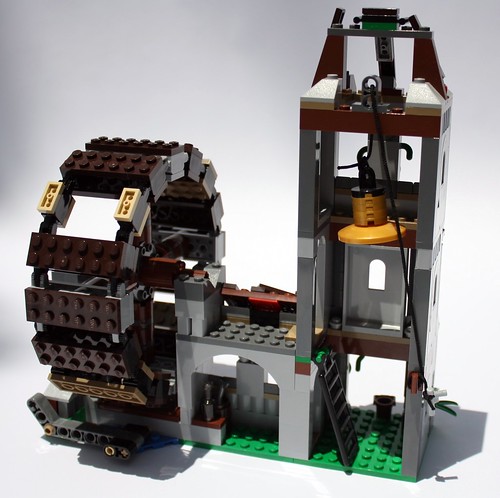 The wheel itself is a hinged circle with alternating plates so you can put minifigs on the outside or inside. In the end, it’s fairly sturdy, but putting it together is a real pain. It ends to shatter apart, and for younger kids, getting the things to line up could be a mess. It has a lot of “make sure it’s exactly like this” pictures, which means you’re getting into complex building. 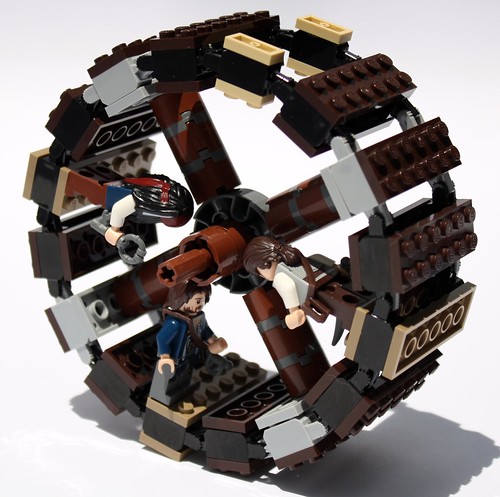 The wheel sits nicely in the grooves of the tower, and spins fairly well in place for what it is. This is one of the nicer elements of the set. Unlike most of the sets, which I’m simply parting out, I’ll probably keep the wheel and modify it for use in my medieval town. The tower has to go, but the idea of the wheel is fairly solid. While I hate the scene, the wheel is a solid build and a great idea. 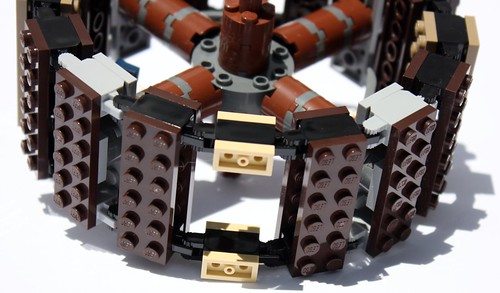 Some other notable parts in the tower is one of the buckets, a dark grey bottle, and a fish. You also get a treasure chest and the “heart,” which is a printed 1×1 cylinder.

Overall, the set itself diverges too much from a scene that was already terrible. The minifigis seem a bit shorted in comparison to other sets, only 4 in a $40 set. The price-per-brick isn’t too bad in the set, especially considered to other lines, but there’s just not enough to it. It’s an ugly set with all those flat panel walls and stickers. Maybe I’m being harsh because of my feelings for the movie, but this just isn’t all that good of a set in my mind.

Verdict: Skip. Buy Norrington on Bricklink if you really want him.