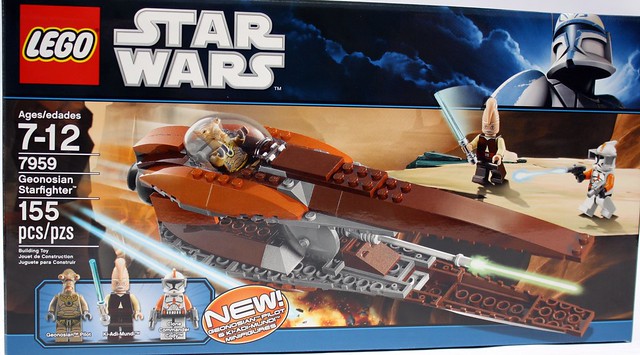 The Geonosian Starfighter is the redesign of a somewhat less-than-iconic ship, a small set with a less than small price. At $30 USD ($35 with the Toys-R-Us tax), so at 20 cents per piece, this may be one of the most expensive Star Wars sets, part-for-part, ever made. The question that needs to be answered is: was it worth the money?

Kinda, but probably not. This particular ship is a remake of the 2002 set, 4478, Geonosian Fighter. Most people probably don’t even remember it in the movie (it was escorting Dooku’s little Segway thing, also seen as blurs in the background), but probably the video games released around the same time. It was a bit more prominent in Jedi Starfighter, but not all that much. The old set had one more figure, almost twenty more pieces, and cost $10 less, so there’s something to be said about the effects of time.

For minifigures, we get two brand-spanking-new figs: Ki-Adi-Mundi and a new Geonosian. Both are sure to draw a lot of the buzz, since Ki has never been in a LEGO set before, and the Geonosians are some of the more sought after figures from PT, having only been in that one small set. Commander Cody rounds out the bunch, but he’s unchanged from earlier sets, save having less of the ugly Clone armor pieces on. 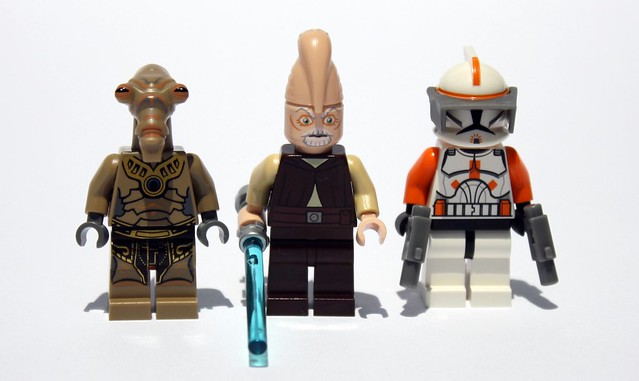 The Geonosian is distinctly different from the old set, but has the same general look. Only his head is a new sculpt, and the rest of the the figure is standard minifig with new printing. His eyes and marking are printed, and the color consistent. 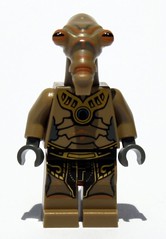 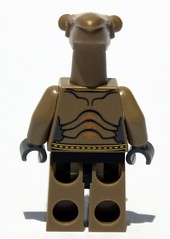 I’m a bit more torn on the printing on this guy than I was on the podracer minifigs. It feels overly elaborate, and removes some of the utility. By comparison, the old figures had some of the same features (like the crotch printing), but were more basic, at least compared to today. Compared to back then, these were detailed. The old heads didn’t look bad, the snout was far wider, but I always thought what they needed was a bit more color. It would have been nice to see these come back. 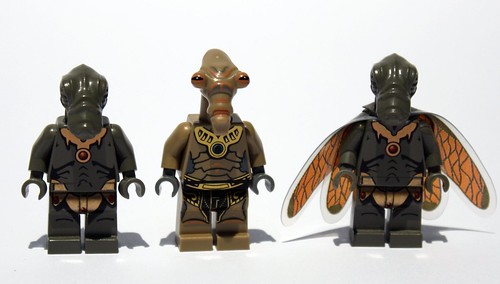 Ki-Adi Mundi is a different sort of beast. He’s well known to fans, as he was a background Jedi in all three movies. So far as I know, he never had a speaking part, unless he said something during the Jedi Council in Episode I. But he was unique looking, and I always welcome new aliens to the brood. 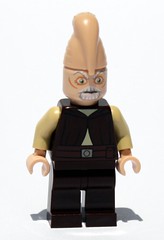 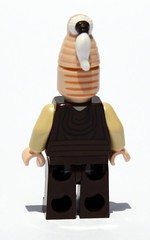 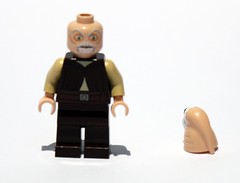 There are a couple of things to note though. First, that head is in two pieces. The top is the same ABS plastic used in all other parts, so it’s hard. The gap is there by design, since the plastic cannot be as cleanly molded. Second, that is a Clone Wars face. I haven’t watched the cartoon series, so I can’t really comment on how accurate that face is, but here, it looks somewhat terrifying. In the movie, Ki-Adi was more like a genial old guy in the face, and reminded me of some nameless Star Trek character that always had big eyebrows and carried the word “alien.” Here, I think it looks like he’s being electrocuted.

This is a part I really wish they would have just made one piece, or if it had to be two, would have gone soft plastic so it could be a little more blended. I think there’s promise for the piece all by itself, but here, it just doesn’t work. You can’t help but look at that guy and wonder why he’s wearing such a funny looking cap. The gap really hurts the look of this figure.

Last up is Clone Commander Cody, otherwise known as the guy who could have saved the Empire if he’d only checked for a body. He’s identical to the figure that came with 2008’s Republic Gunship, and that’s not a bad thing. The only real change is that LEGO decided to not have you put all that extra body armor junk on the clones (but they still include all the parts in the set). 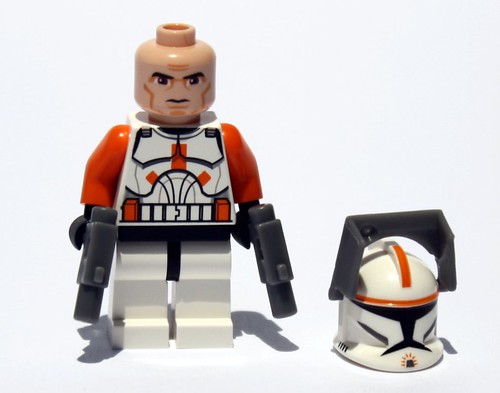 He looks good, and the orange highlights actually fit in with the Ice Cream Clones from this years battlepack. Also good to see him show up in a more inexpensive set. One thing I really do wish though, with the named clones at least, is that they include a hairpiece for them. We see Cody without his helmet on, so it’d be a good mix. But… all of that being said, what is he doing in this set? Was he seen fighting around this ship in the cartoon (since it wasn’t in Ep III and he wasn’t in Ep II)? What is the commander assigned to Obi-Wan doing with another Jedi? If you can help me answer these questions, please do so in the forum comments. 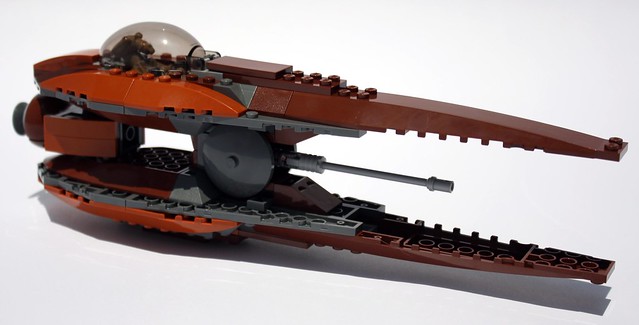 As for the fighter itself, we certainly see a few upgrades from the original ship, and one fairly significant downgrade. First, the up. We have a better contour to the whole thing. Instead of blocky slopes on the side, we get the contoured ones. It actually adds quite a bit to the effect. We also get a legitimate cockpit, which is a huge welcome change both to us and to the pilot, who in the old set was basically just sort of crammed in there.

The huge downgrande I saw is on the laser at the front of the ship. Instead of using a socket turret, which can rotate wherever we like, it uses a simple technic pin and joint. This means that laser only sweeps side to side now. A shame, I love those socket turrets, and it was the nicest part of the original ship.

Oddly, what we don’t have are any stickers. I’ve been both for and against stickers… I hate them on pieces where they look out of place, but on big brown slopes like these, a sticker with transparent backing can look good as an accent. It would have been an easy thing to put in and give some resemblance to the old set. 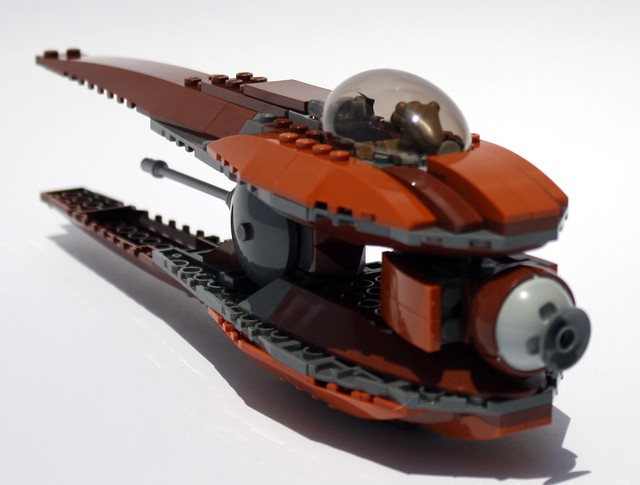 The biggest improvement we see is in the gap between the engine and gun. In the movie and models for this ship, it’s very noticeable.Â  In the old one, basically non-existent. The whole center section is also sleeker and more defined, which is certainly a step up. The old set was an ugly ship that didn’t feel fun to swoosh. This one, you can pick it up and swoosh all day long.

There’s also a well-defined top and bottom. The bottom uses a trap door that’s basically held in place by friction against the brick that runs up to the long slope. It works very well, and the newer high-friction trap door used as a bomb bay cover is used effectively here. Nice to see, and a good addition. Trust me, when you swoosh it around, that thing isn’t opening unless you open it.

The inner section of the top and the bottom of the ship feature a newer part as well (one I originally thought was unique, but has been used in the city line since 2009).This gives a great deal more contour and feel to the underside.

One of the major knocks I have to give the ship is how ugly the long brown slopes that make up the front are. It would have been nice if they weren’t just bare brick, and something would have been done to add or smooth them. Not sure what that something would be, but it does kind of look ugly, given how the rest of the set looks.

Outside of minifigs, no new custom parts in this set, but there are several unique colors for the parts that are offered. There’s the boat/airplane part just above, the slopes in dark orange. But the underlying problem is still there with this set… it’s just not a good deal. $30 is way too high for what you’re getting in the set. You get fewer parts that Ewok Attack and the same amount of new minifigs, but it’s $5 more. This should have been the bottom tier set, at $20. Add another minifig or a couple of battle droids and I could have seen $25. Re-issue the clear wings and I’d pay $30.

And that’s a shame. It’s a good, fun build. The ship is very durable, it’s very swooshable, and it gives us figures we’ve wanted for years. Price alone kills this thing. It’s worth it if you can get it on sale, but not for the price they’re asking.

Verdict: Buy when it’s on sale, and a good sale at that. It’s currently available on Shop@Home and Amazon.