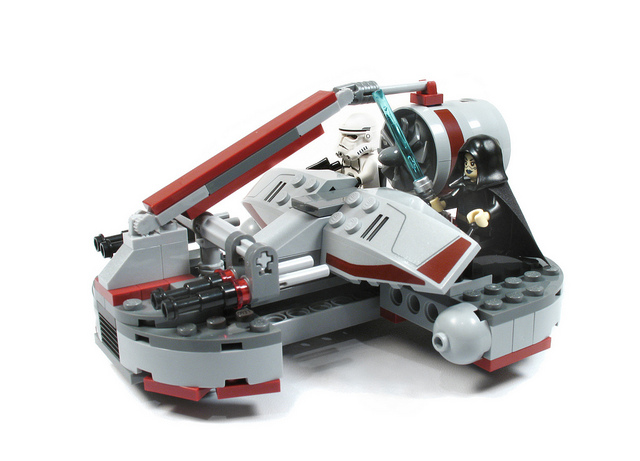 “The Infantry Support Platform (ISP), also known as the swamp speeder, was a repulsorlift speeder first deployed by the Grand Army of the Republic for swamp combat during the late Clone Wars.” Thanks Wookipedia, without you I was going to assume this set was something a drunken set designer thought up to fill out the Star Wars lineup.

I’m not going to lie. I can’t take the Swamp Speeder seriously. It was actually in Revenge of the Sith, so I can’t make fun of it for being some goofy Expanded Universe craft… but it’s based on real world swamp boats, hence the giant fan for propulsion. Except it hovers, and has armor plates and blasters. It’s like someone was designing a light hover tank but gave up half way through and said “bah, I’ll just stick a fan on it, NEXT PROJECT”. 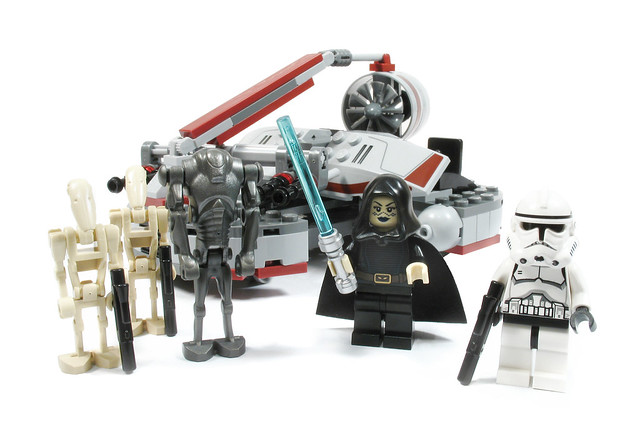 Priced at $29.99 with the Toys’R’Us markup built in thanks to the store exclusivity. 176 parts, two real minifigures, and three battle droid minifigures in two flavors. That’s just over 17 cents per part. Even accounting for the minifigures… that’s a hard price to swallow. I will say that Barriss Offee is one cool looking Jedi, and the only other place she’s available is in a Magnet set with Kit Fisto and the illustrious Captain Jag – so if you have the ARC-170 this set is your better option to pick her up… but wait for a sale. The Episode 3 style Clone Trooper isn’t bad, but it isn’t my favorite stlye armor. The tan Battle Droids never really impressed me, and the same goes for the Super Battle Droid but at least it adds some variety. Plus they make fair targets for the four flick fire missiles. 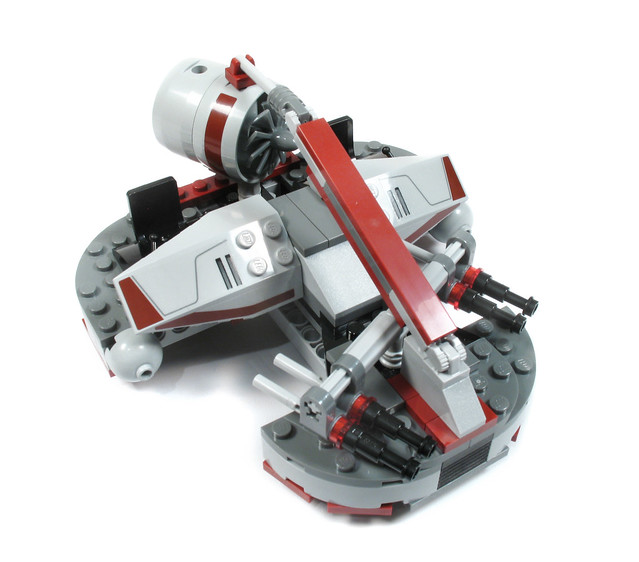 That’s right. Four of them, right up front. At least LEGO had sense enough to dress them up, so they’re cool looking flick fire missiles… but functionally, they suck as much as ever. The neat thing is the pivot action… 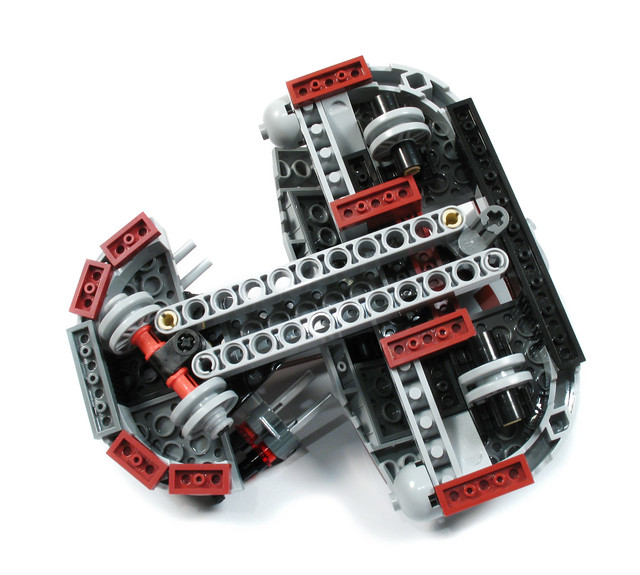 Thanks to some clever Technic trickery, you steer the vehicle and aim the four barrels on the front by twisting the fan side to side. I love that sort of thing. One technical complaint is the fan points the wrong way in relation to the way the set rolls. Clearly, whoever came up with that never rode in a swamp boat themselves. I’m sure kids won’t mind though. It’s a fun feature. 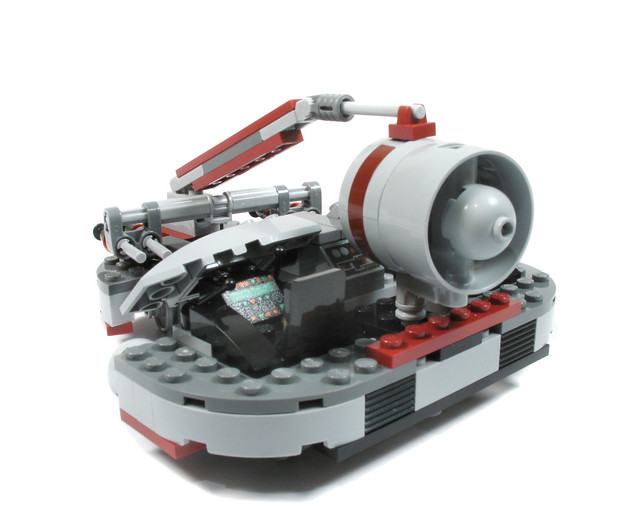 Something that struck me as strange was the inclusion of both printed and stickered control panels, but beyond that I have to question the usefulness of a control panel that’s blocked by the massive fan. 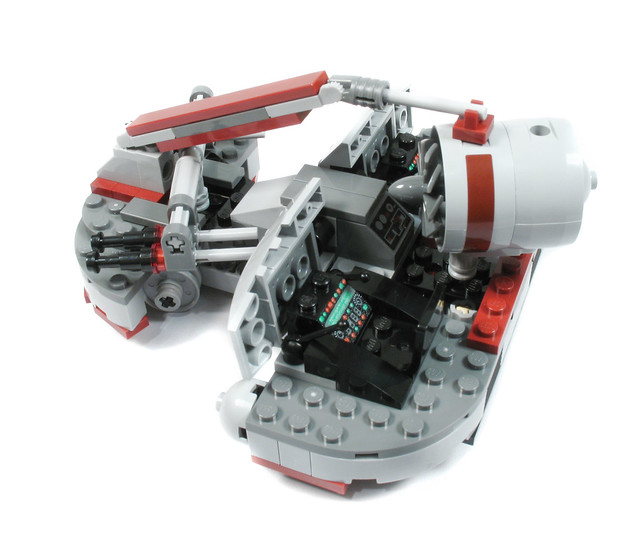 Whatever. The other stickers look good but they’re a pain to apply onto the curves surfaces. Is applying them worth the effort? Honestly, if I wasn’t photographing this, I wouldn’t have bothered. 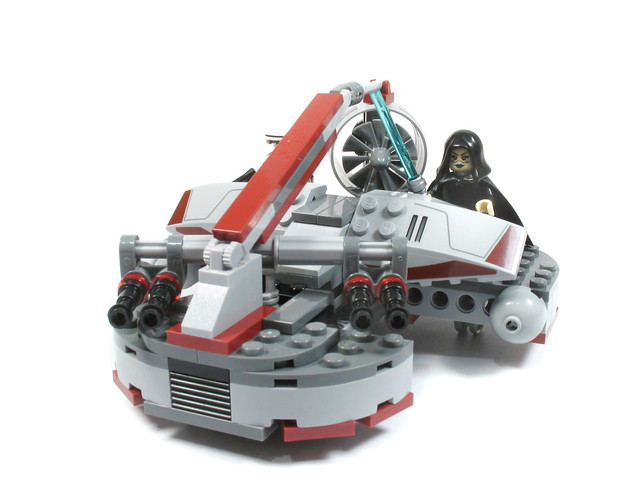 But without the stickers, it would look pretty boring. In the end, this really doesn’t feel like a $30 set. Heck, this hardly feels like a $20 set. They really should have included a STAP for the Battle Droids, or maybe a mini-tank droid instead. Maybe if you’s a big Clone Wars fan it will have more appeal, but to me it’s a parts pack, and should be bought on clearance accordingly. 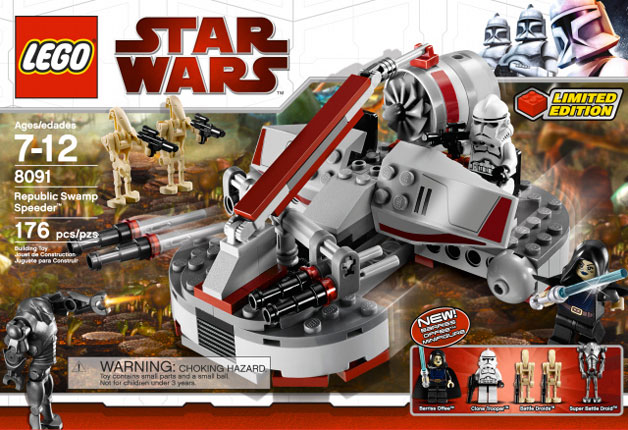