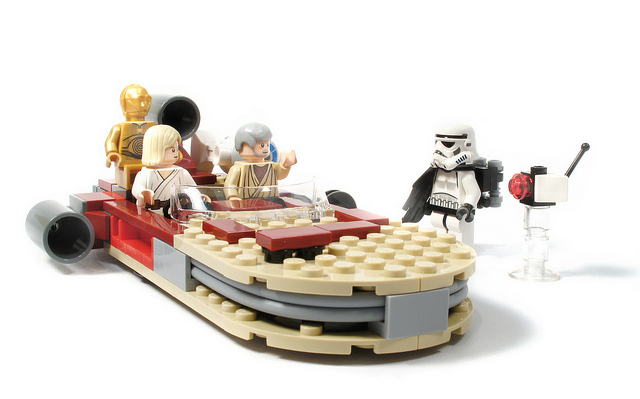 Ah, the iconic vehicles of Star Wars… Will you ever stop being redesigned?

Ha! Don’t count on it. So far we’ve seen four versions of Luke’s Landspeeder, although maybe my inclusion of the 2008 Key Chain/Bag Charm is a bit too generous. I know it’s hard to come up with new set ideas for Star Wars since all the well known ships have been done (repeatedly) but I’d love to see some more Expanded Universe ships that aren’t from the pre-ANH era. Even so, I don’t mind this redesign too much. It’s a decent mix of the better aspects of the two previous sets and it has plenty of appropriate characters included to make it almost feel like a playset instead of just a vehicle. 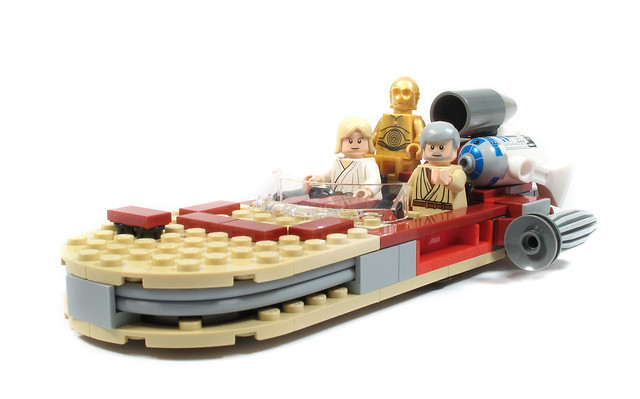 This one retails for $24.99 and comes with 163 pieces, and for that you get the Landspeeder itself and 6* minifigs (*if you consider the brick built Sentry Droid a minifig at least, to me that doesn’t count but I think I’m in the minority with that opinion). The ratio clocks in at 15.3 cents per part, but the figs really skew that so it’s more reasonable than it appears. Considering minifigs cost at minimum around $2.50 each on their own, that’s more than half the set price in figs, leaving you with the speeder itself and a close to 1:1 ratio. I’d say it’s a good deal. 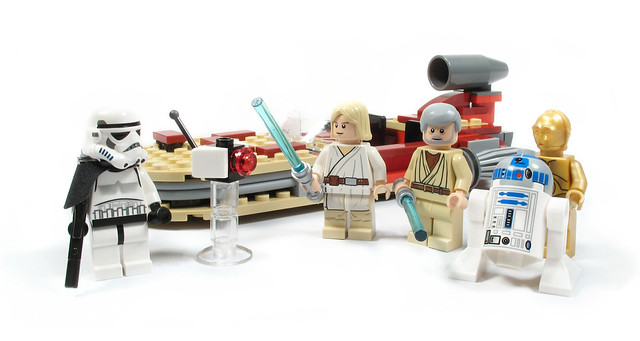 The build is nothing special, but come on. It’s a Landspeeder. What do you expect. No need to reinvent the wait there are no wheels on it now are there… 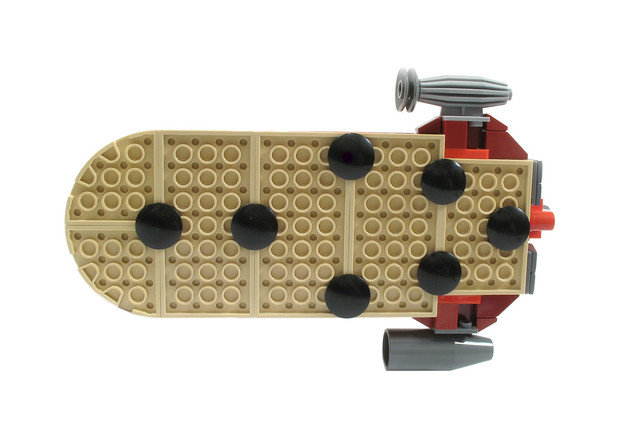 Good ol’ boat tiles. Structural support and smooth sliding goodness. Swooshing doesn’t seem very fitting for a Landspeeder, but I have to say that underside array makes this quite scootable. 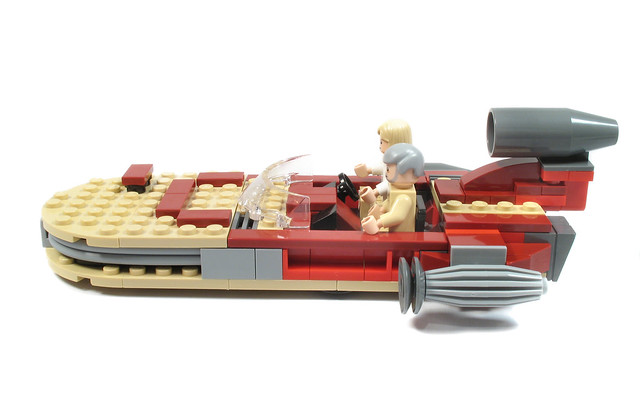 By the way, I’m about 95% certain that the only reason this set was created was to incorporate the curved Speed Racer windscreen. Seriously. Back when those sets started showing up the first thing I thought was “Man, that would look great on a Landspeeder”. And it does! 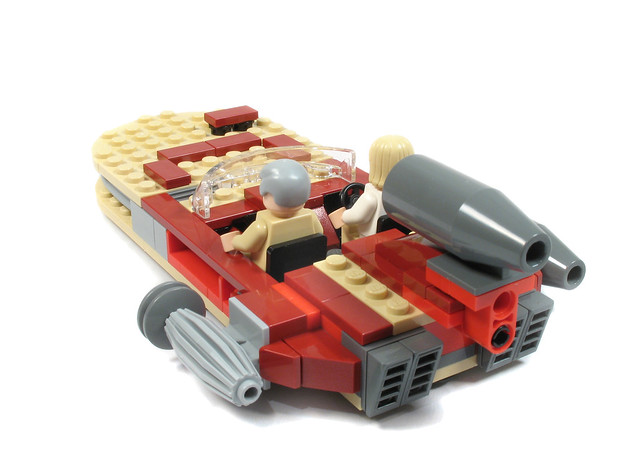 This set also mixes the color scheme from the ’99 first edition (tan is technically less accurate than sand red if you’ve seen the actual prop Landspeeder, but it just feels more right, right?) with the size of the ’03 revision, with a few more improvements. The top/center engine nacelle is incorporated better in this build than the other two, but sadly the rear of it and the side nacelle transitions aren’t quite as good as they could be. Guess they had to save something to change in the next version. The rear vents are aÂ  nice touch though. 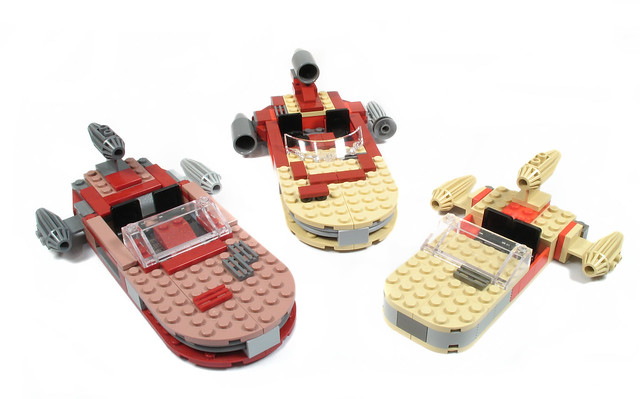 You can really see what I mean about it being a mix between the two previous styles, right? I’d like to say I appreciate the idea of the stripped down left nacelle, but to be honest this seems like overkill. I hate to say it, but a sticker to simulate the missing panel might be better (maybe not better… but more accurate at least). 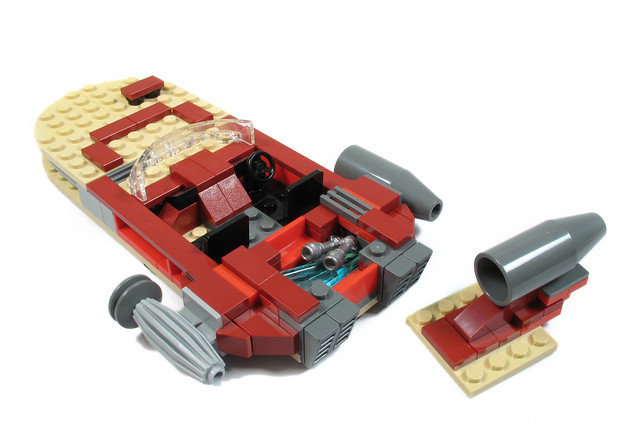 Also, just like before, the rear pops off to handily store contraband.

So, what more is there to say? It’s a nice sized set and the price feels reasonable considering the lineup of minifigures though they missed an opportunity to toss in the Dewback again (you can never have too many Dewbacks), and it’s the top of the line for official Landspeeder designs. I’d say if you had to buy one Landspeeder set, this is the one to get. Too bad I didn’t know that when the others came out. 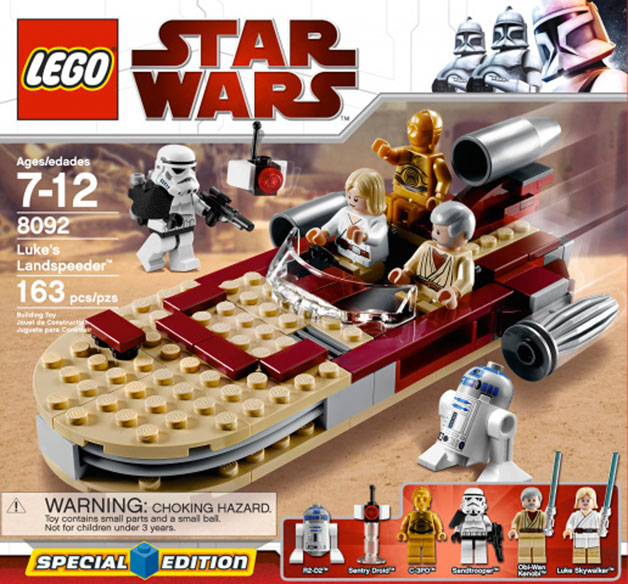