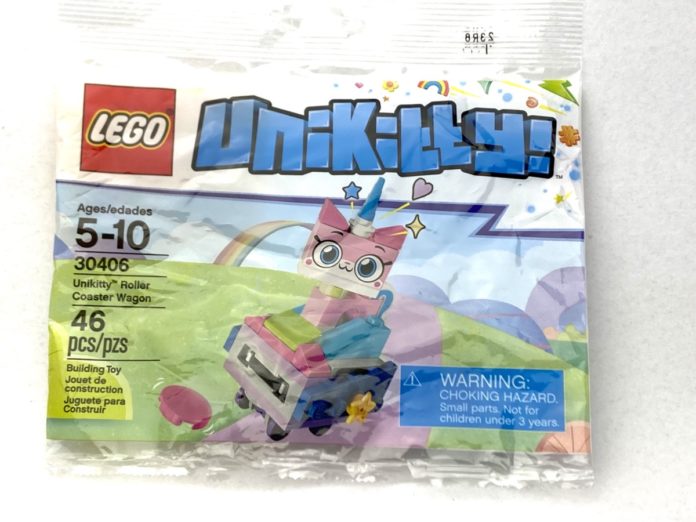 Even though today’s polybag, 30406 Unikitty Roller Coaster Wagon, says “Roller Coaster Wagon” on it, it doesn’t actually contain the roller coaster car you’d think it would contain. I’m talking about this piece, image courtesy of Bricklink:

It’s not like they were released at different times either. Both the Unikitty theme and the roller coaster car element were released in the same year, 2018. In fact, the Unikitty theme had a roller coaster set that had two of these in them, 41456 Unikingdom Fairground Fun. So given all that, I don’t think it’s unreasonable to think that a polybag that has “Roller Coaster Wagon” would actually contain a wagon. In fact, I don’t think it’s unreasonable to think that one would want to get a couple more wagons to make a longer wagon train to augment the one in the set, or even get some new colored cars for the bigger coaster set, 10261 Roller Coaster (which also came out the same year).

But no, instead you build a brick-built coaster car that also… launches 2×2 tiles. They’re both 4-studs wide so it’s not like the car could have been used as the base, but whatever. I’ll stop beating a dead horse. 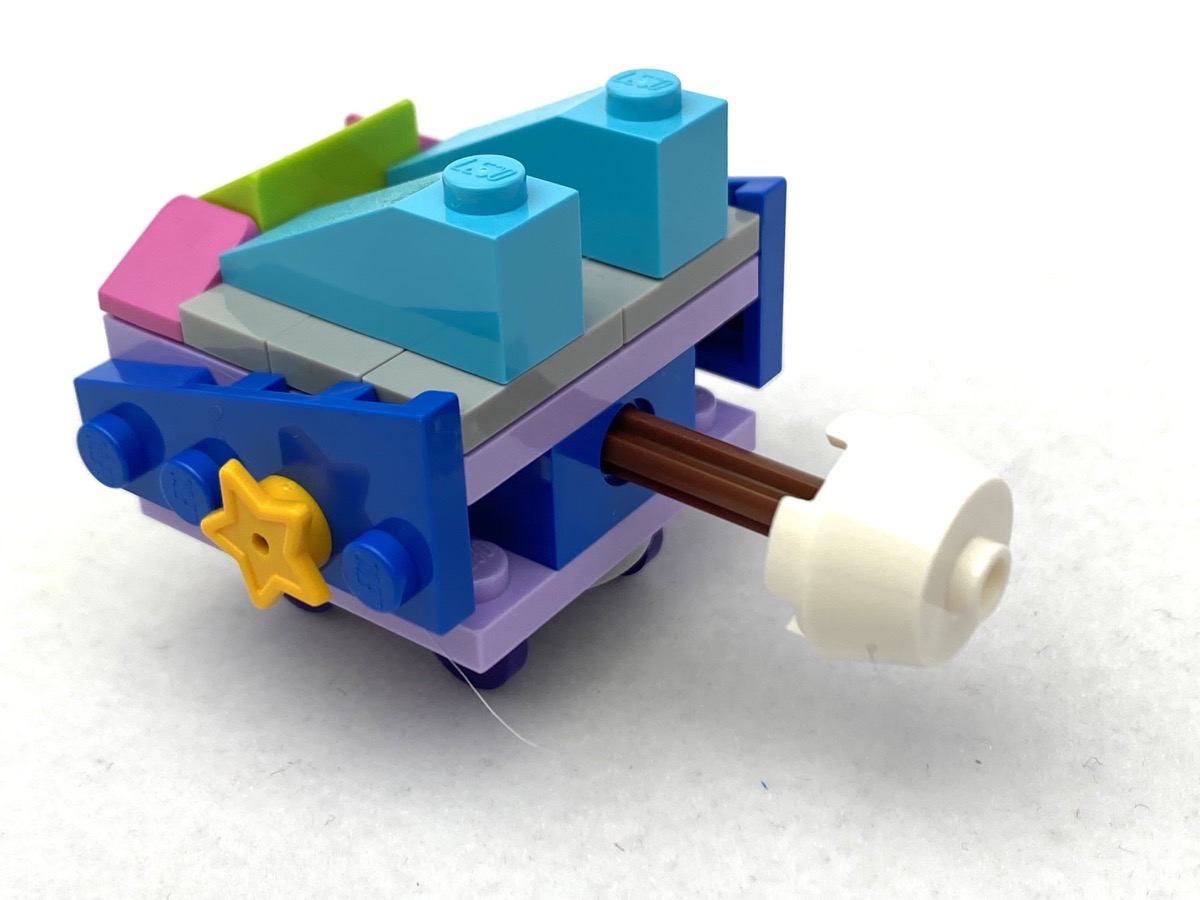 There’s a plunger in the back to activate the launching mechanism. 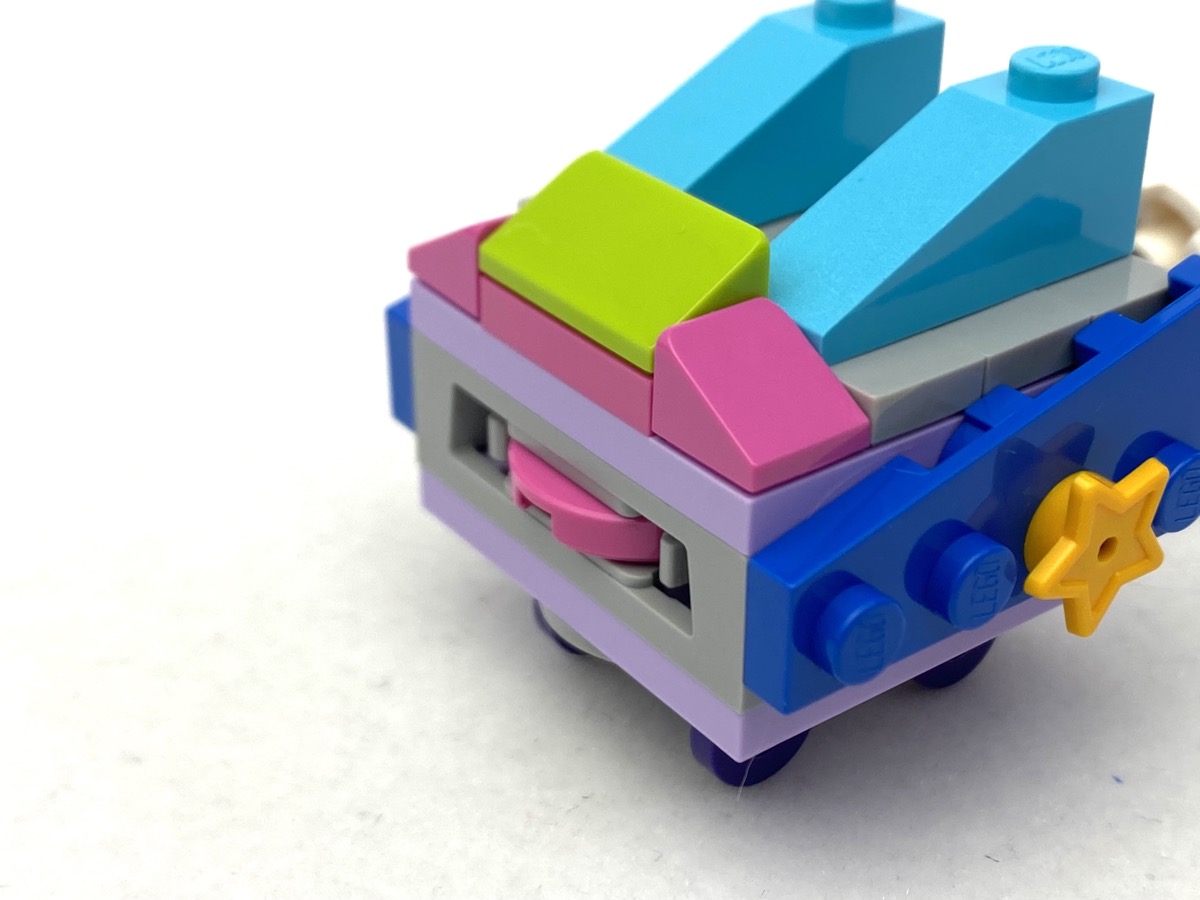 Unikitty doesn’t actually attach to the car. There’s a set of jumper plates that two 1×3 slopes mount on, providing a space in between for Unikitty to slot into. The front of the car has a wedge plate to stop Unikitty from sliding forward but no such thing in the back so she’s very prone to sliding off at just even the slightest movement of the car. 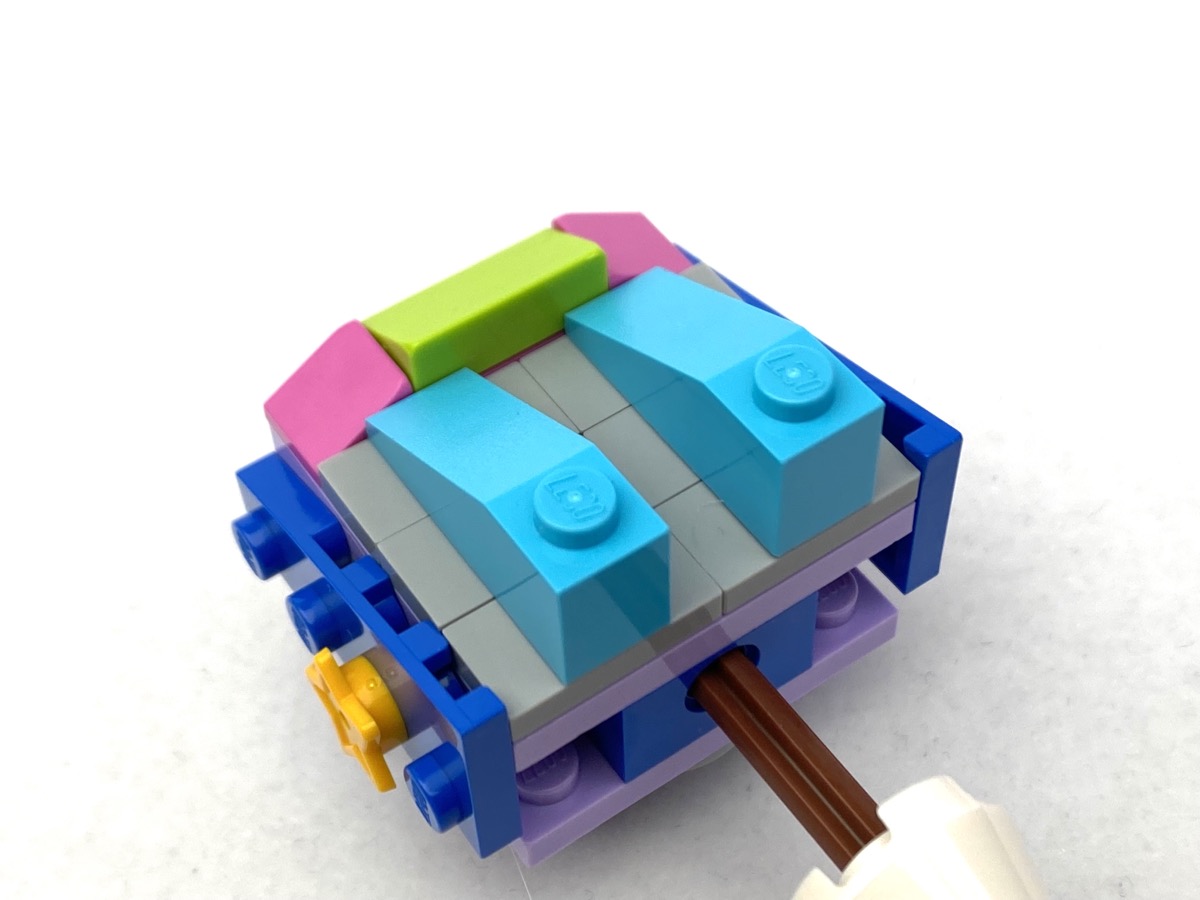 Given the tile launcher and the plunger, I can understand maybe why they didn’t go with the standard car. You wouldn’t be able to attach it to an existing coaster train as doing so would impede on the tile-launching play feature. But then I don’t think LEGO should have had “Roller Coaster Wagon” in the name. This polybag might be based on some event in the cartoon, but then they should have just used the actual car element. 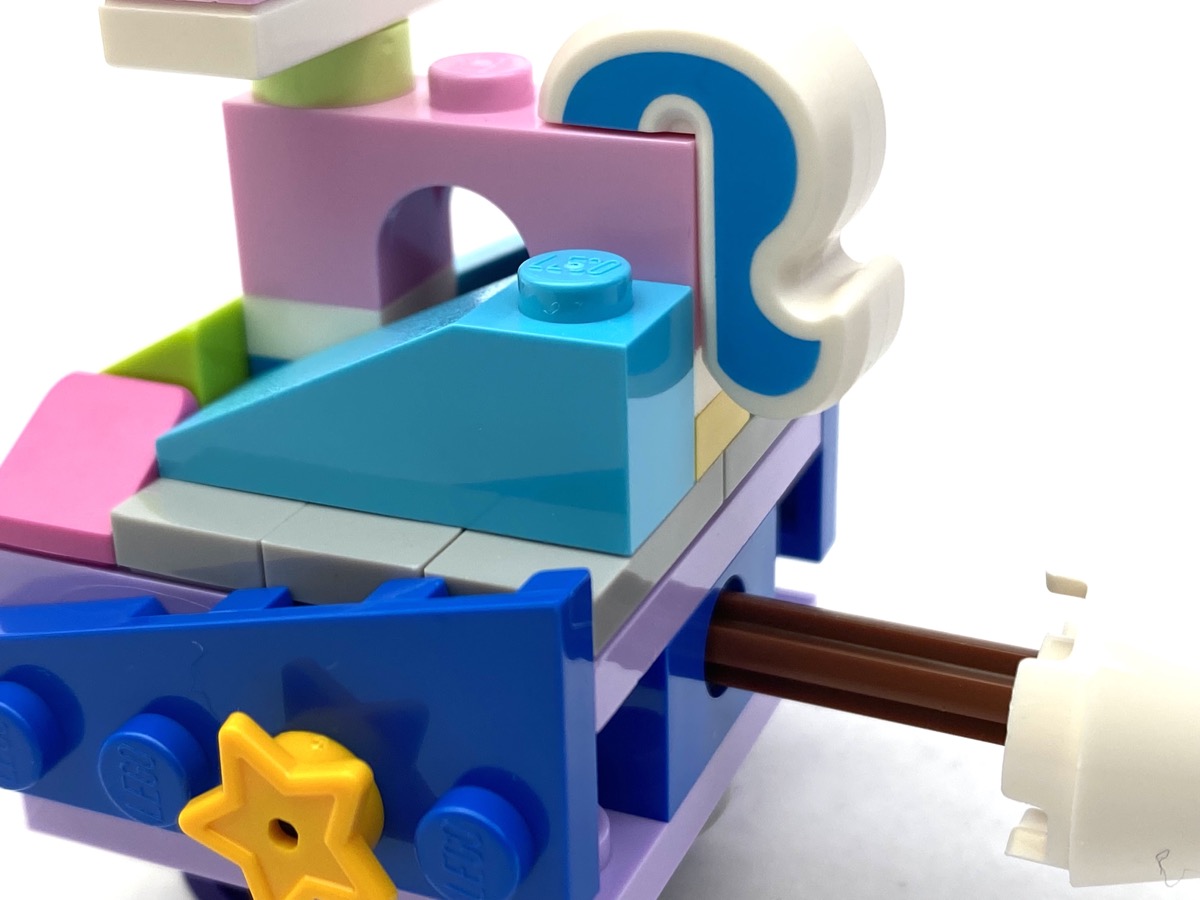 One other note about this set is that all of the instruction’s steps are to build the car. There are no steps to build Unikitty. I get that she is the minifig equivalent for this theme, and there aren’t instructions to build minifigs (unless there are some extra accessories that need to be attached), but Unikitty’s a bit more complicated than a minifig. I just found it funny that step 0 was build Unikitty and steps 1 through 11 were for the car. 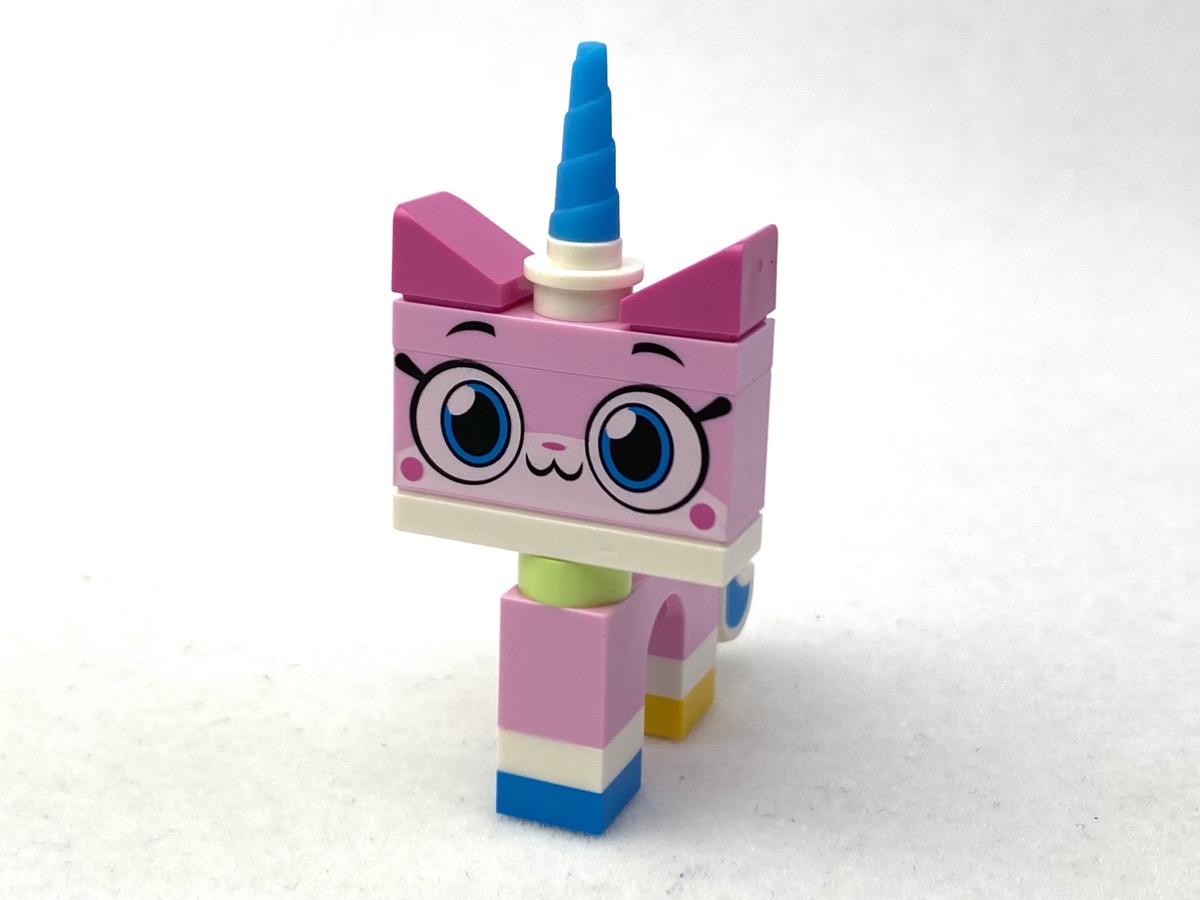 This set sucks! There’s absolutely no reason anyone would want this set. Well, maybe if someone wanted a Unikitty minifigure but didn’t want to buy any other set or any of the blind bags to get one. The version of Unikitty you get is not unique to the polybag, and the “roller coaster car” is not an actual roller coaster car element. That last point is a bit irksome because it almost feels like false advertising. This would have been a great way to get some extra cars for the various roller coaster sets that were released that year but no, you have to build some weird little car instead.