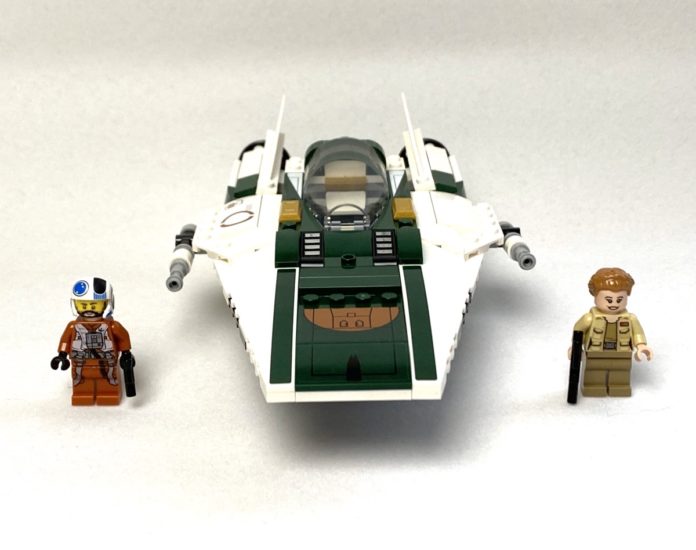 With two previous reviews of the A-Wing under my belt, it was time to move on and review 75248 Resistance A-Wing Starfighter, the current iteration of the ship. Coming off such a high from the 5-star rated 75175 A-Wing Starfighter, the Resistance version was the anchor that brought me back down to earth. 75175 took several steps forward from the previous version (75003), the current green Resistance version took a few steps back.

Snap Wexley is one of two minifigs you get out of the box. His torso is treading into the “too much detail” territory but it’s just fine for what it is. The helmet is the standard cheek-hugging helmet we’ve known all of the Resistance fighters to use no matter which starfighter they’re piloting. And he lacks any alternate face printing. I wonder if bearded faces just don’t get a second face because you’d see the printing from the other side more easily.

The second minifig is Lieutenant Connix. No beard means you get a slightly different facial expression on the back side of the head.

And that’s it. You only get two minifigs in this set which would account for it’s lower MSRP starting point than 75175. And despite the lower price, it already feels like a downgrade.

Despite looking so much like the 75175, there are enough differences to note that this wasn’t just phoned in like the Snowspeeder models. The slopes on the sides are built differently, the rotating canons on the sides are completely new, and the details provided by the stickers are different as well. I’ll never understand why there is such asymmetry when it comes to the stickers. 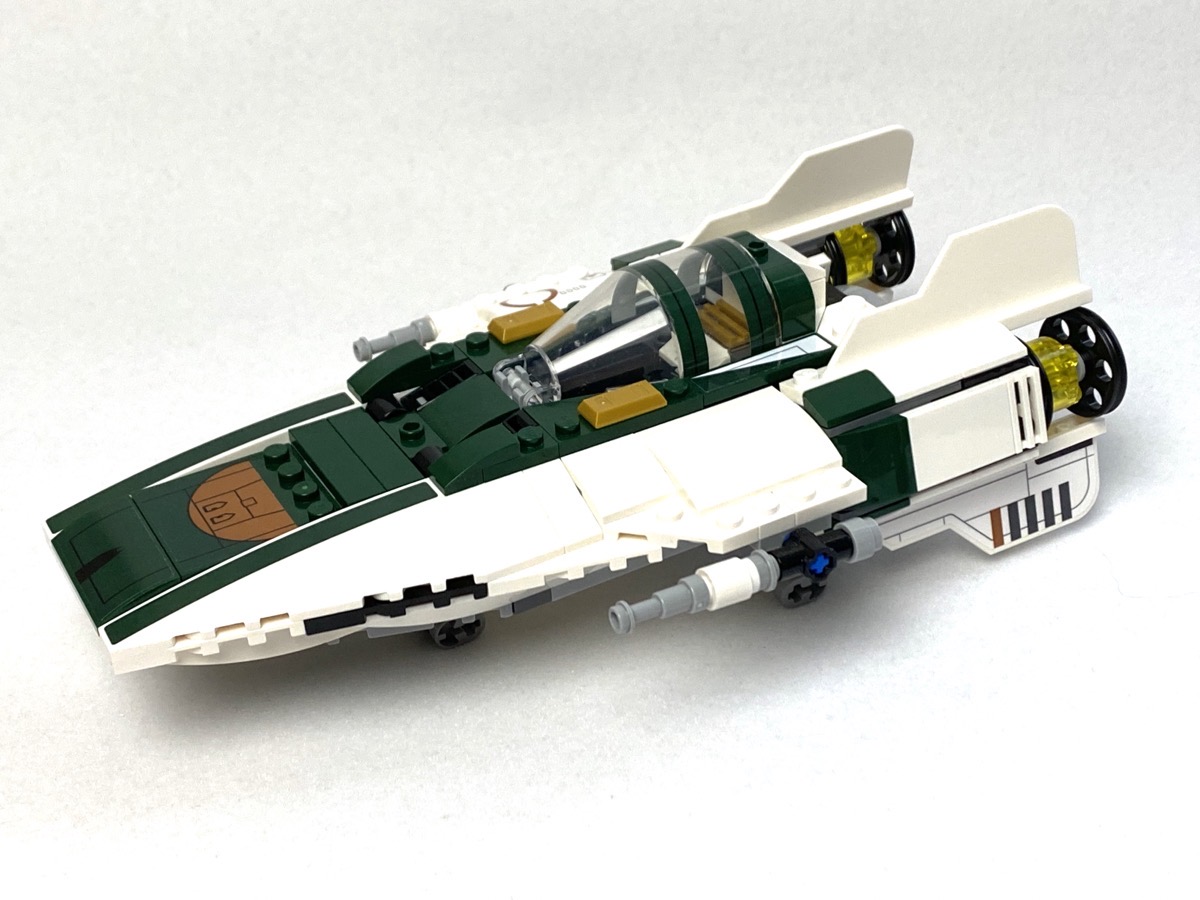 Or why they don’t include enough stickers for all four of the fins. 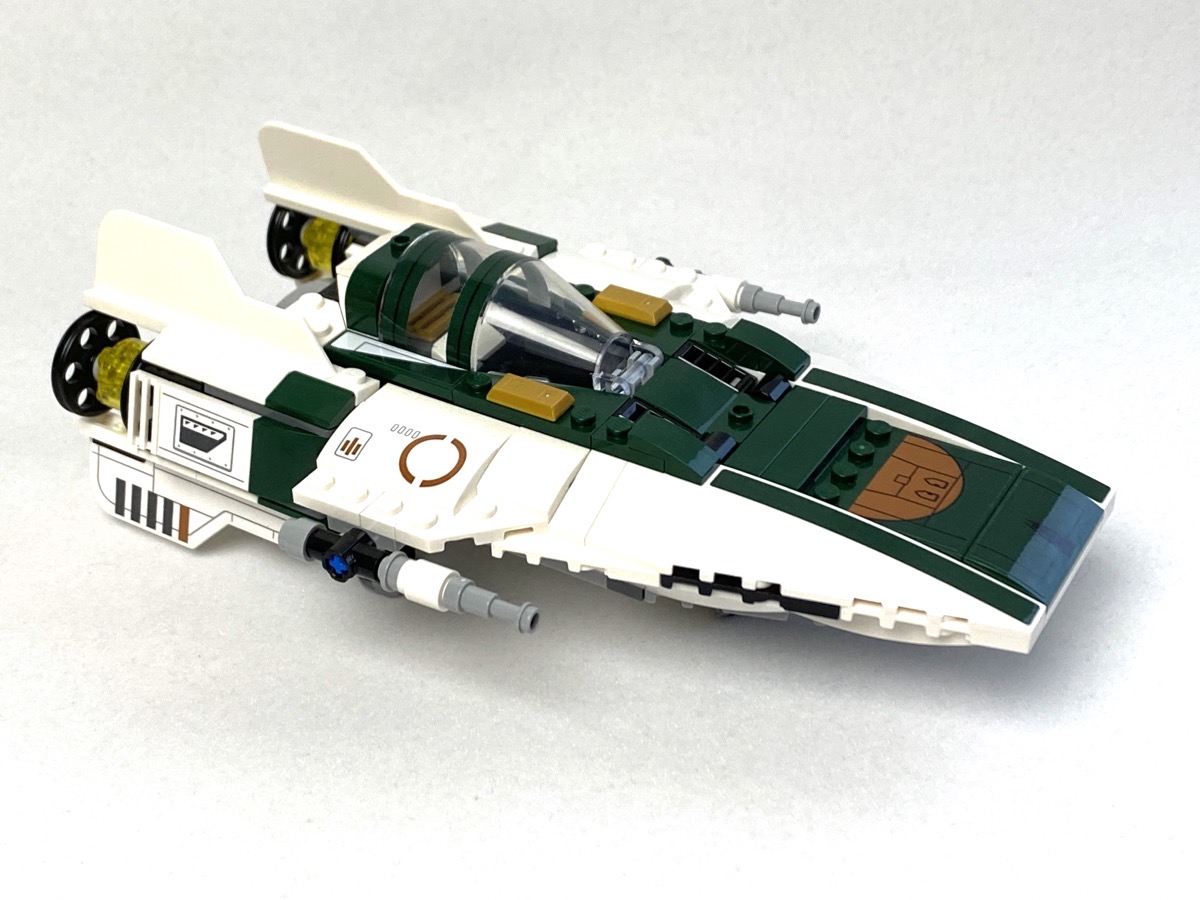 The tail fins are angled properly like last time except, oddly enough, they are constructed differently. There’s a bit of a wobble on the fins which cannot be mitigated by a parts substitution like I did last time. 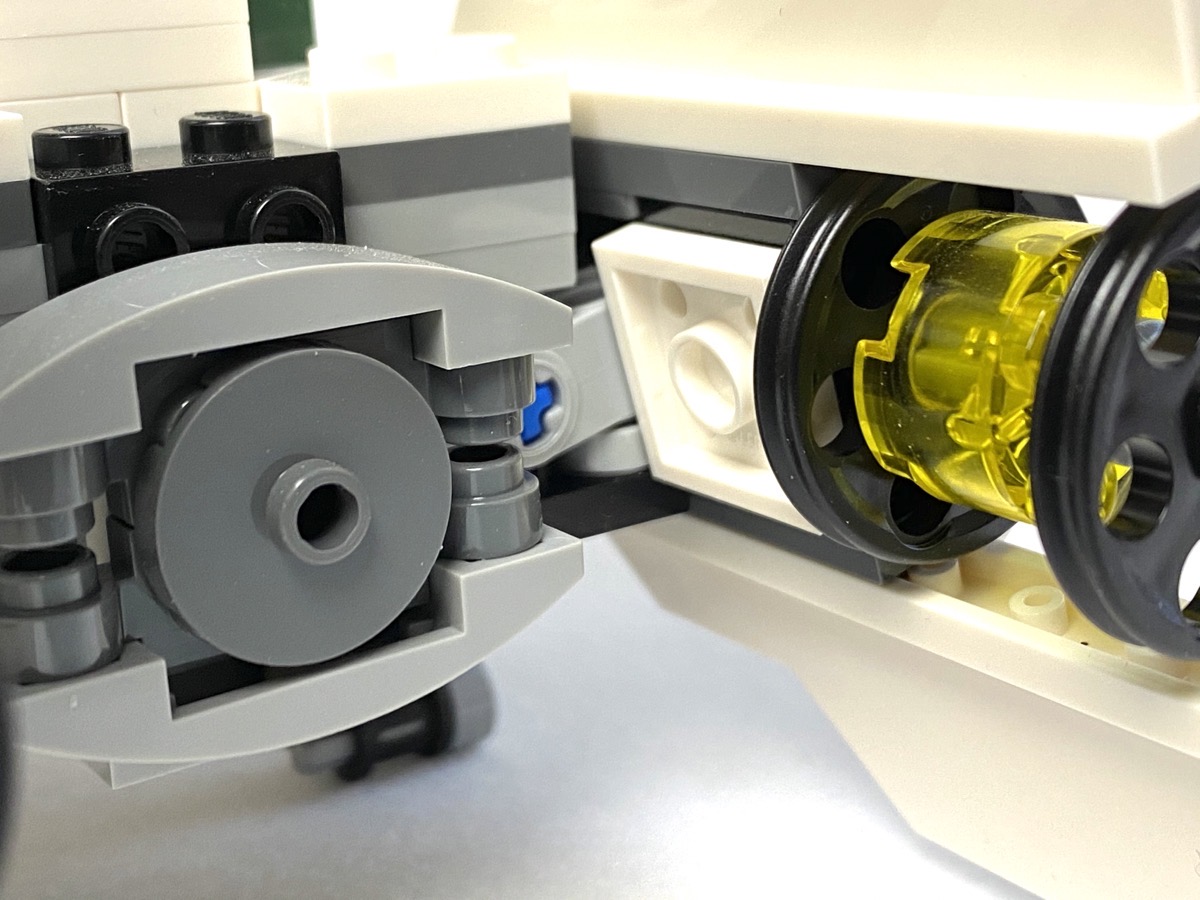 There isn’t enough wiggle room in there to replace that 1×1 round light grey tile with a 1×1 round plate.

The designer still used the 2×2 round brick trick to hide the axle that keeps the rear exhaust in place. Again, it’s a bit of a cheat but totally fine to achieve that level of detail at such a small scale. Also, visible in the above two picitures, the top fins are stickerless. 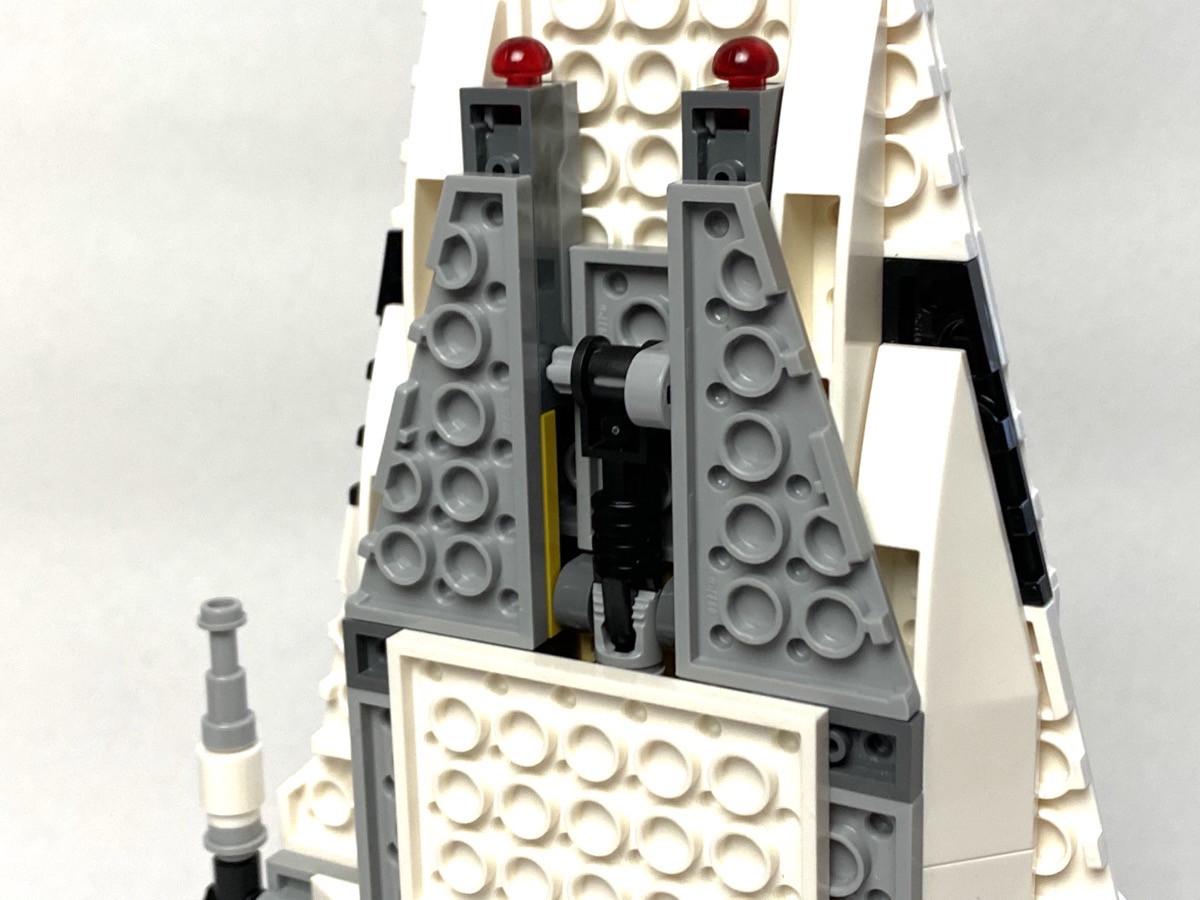 Another design approach they kept was the excellent almost-fully concealable landing gear. The front tucks away nicely. 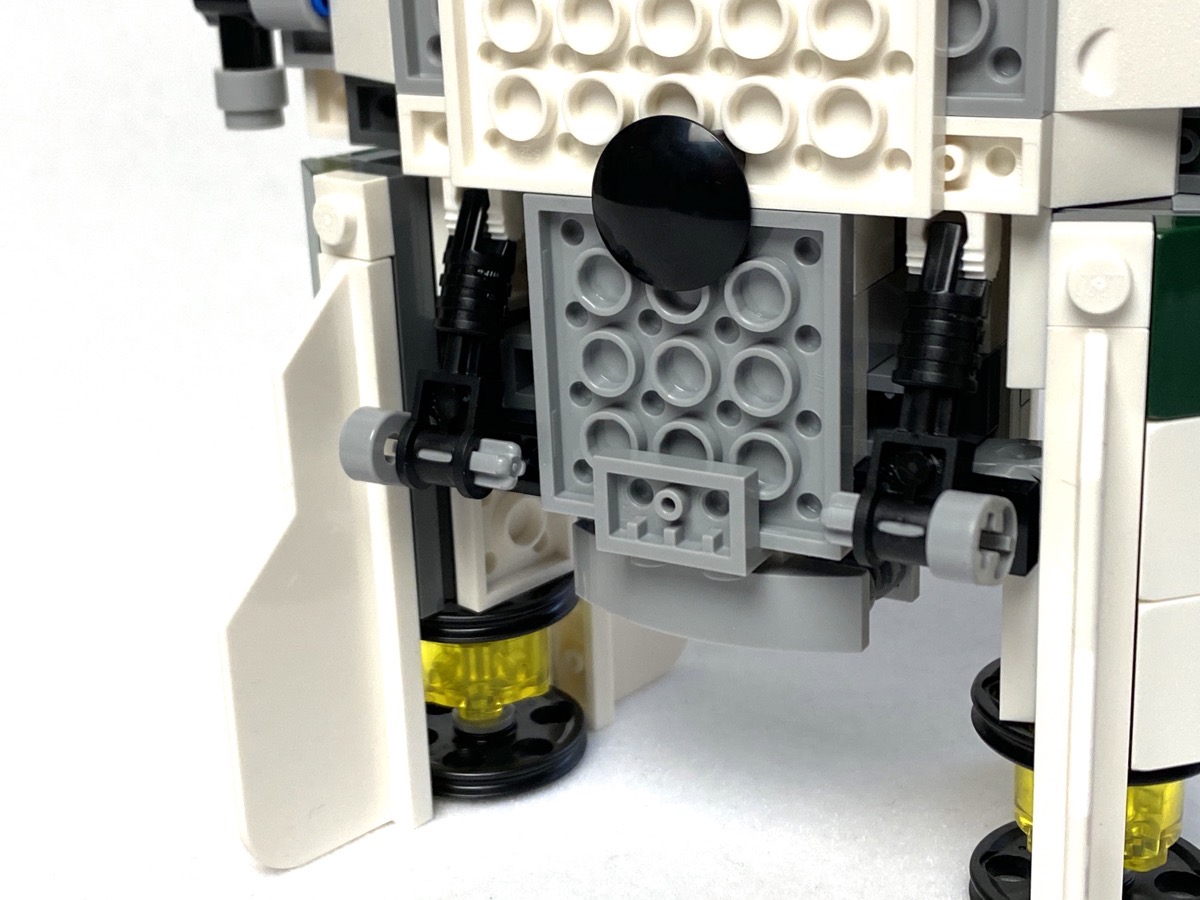 But the rears still kind of lay back without fully tucking away inside the body of the ship.

You can see in the front landing gear picture the tips of the spring-loaded missiles that are nicely hidden away. There’s nothing worse than seeing a nice sleek starship with gigantic missile stems protruding out from the body. 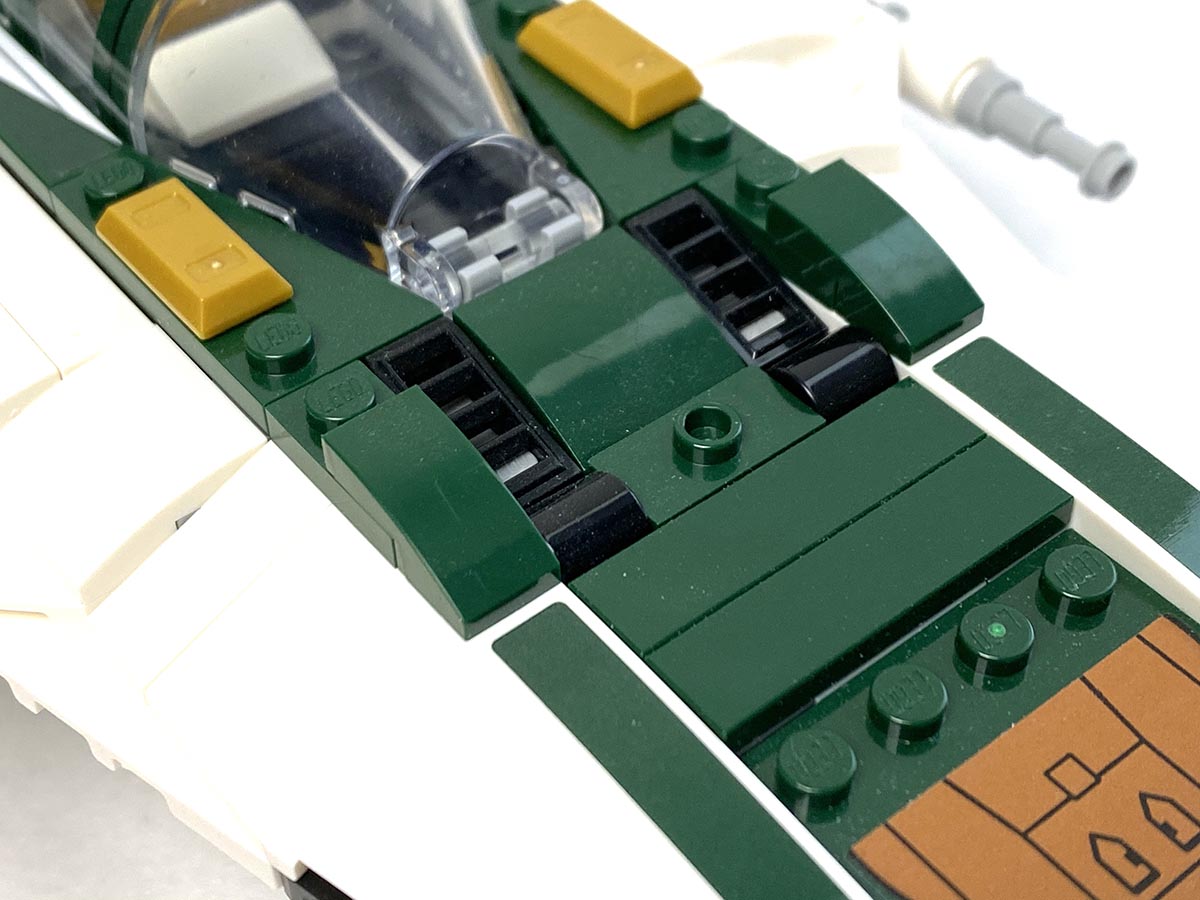 The trigger mechanisms are the same as before, just on top of the ship in front of the cockpit window on both sides of the jumper plate. 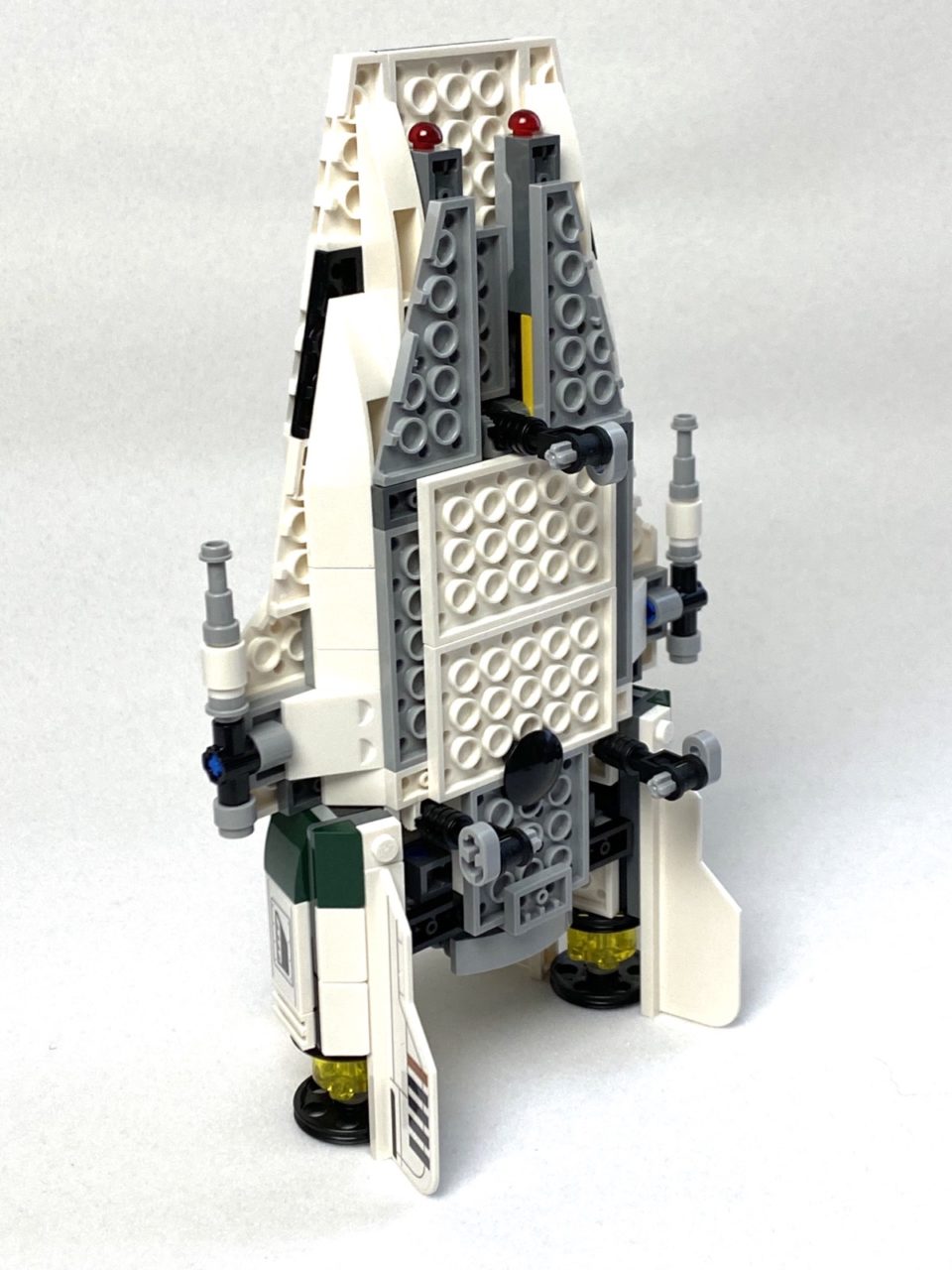 While in the previous version there was some attempt at dressing up the bottom, that idea seems to have been abandoned as there isn’t a hint of green anywhere. I’m not expecting slope bricks snotted in, but the bottom is, as always, completely neglected. 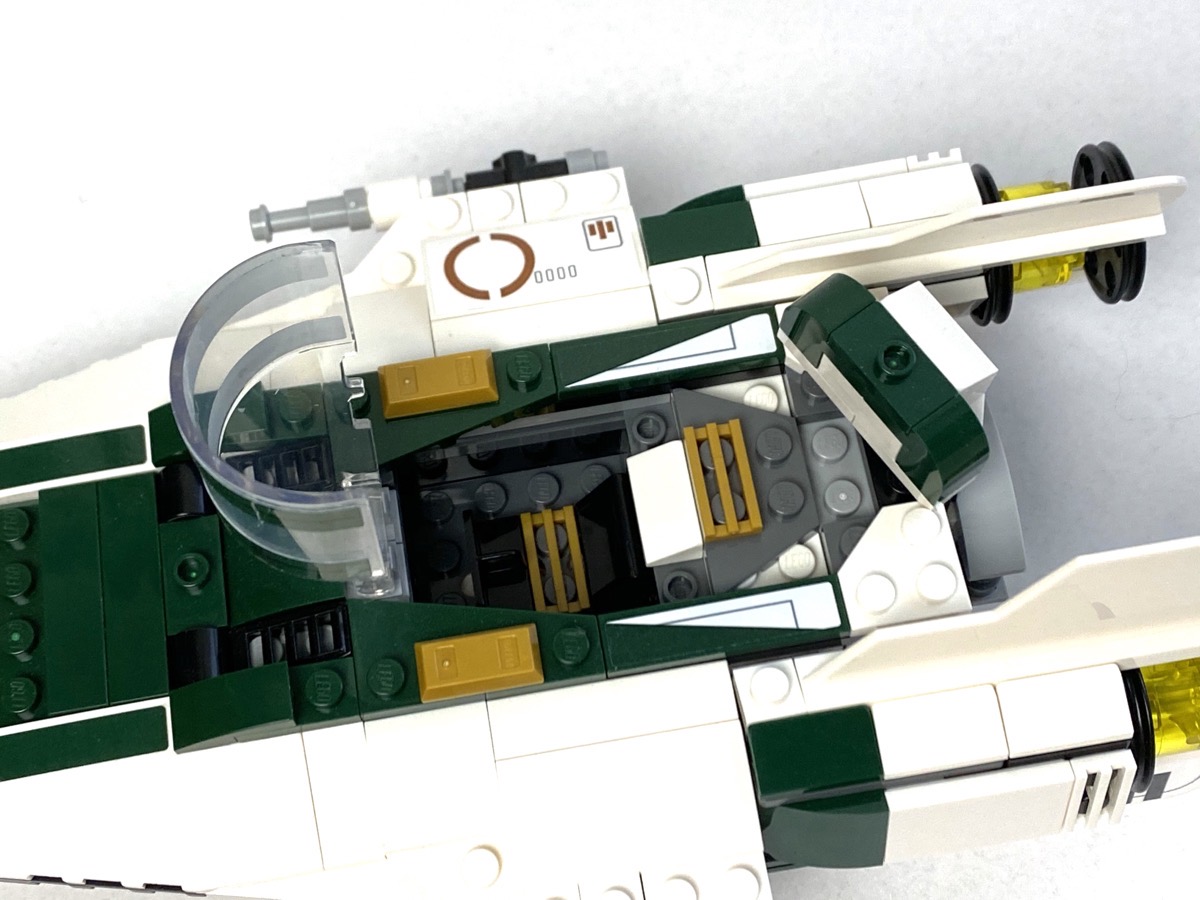 The cockpit is another area where they changed things, around and for the worse. 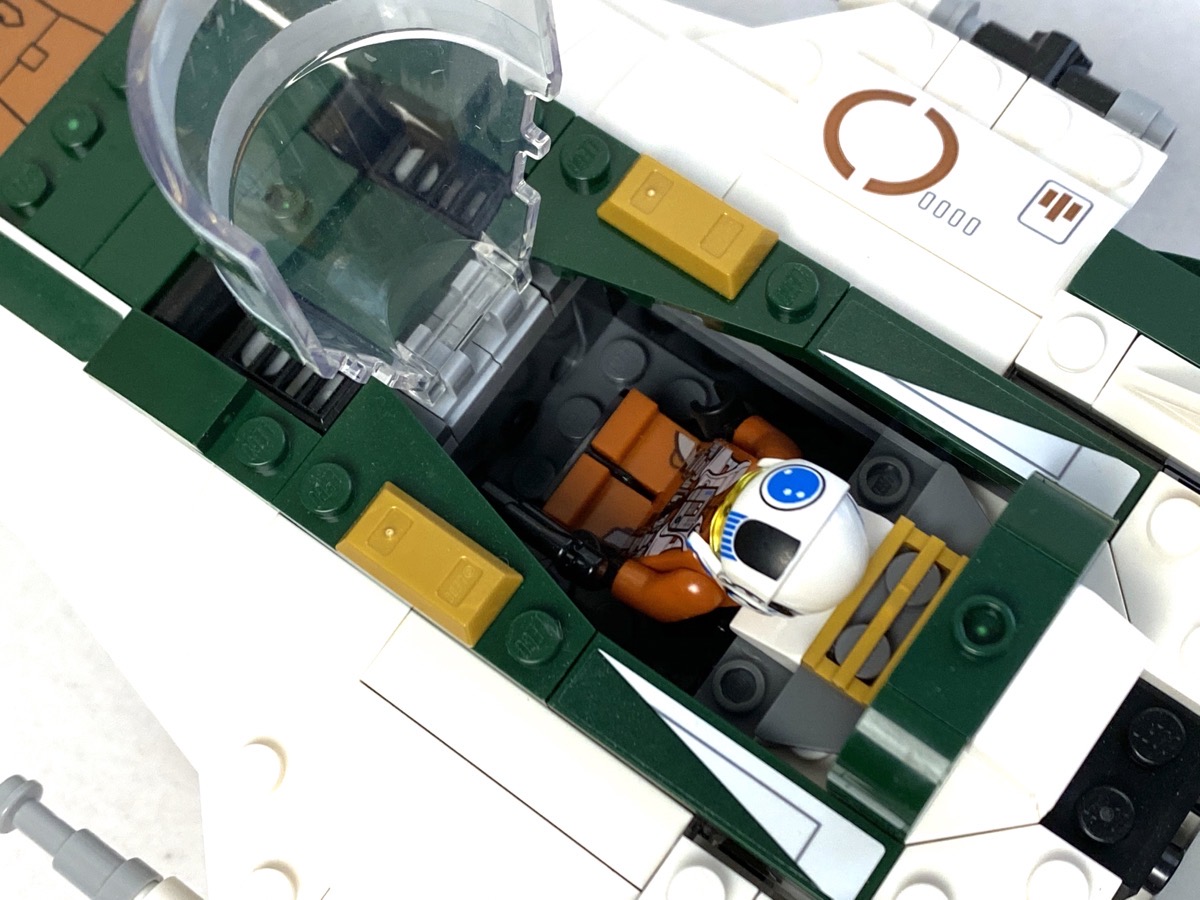 Yes, it’s still roomy enough where the pilot can sit inside while holding his sidearm but there is a complete lack of instrumentation for the pilot to, you know, pilot. Also, that storage compartment that I liked that’s been present in just about every A-Wing is also gone. Shame.

I can’t help but compare this A-Wing (75248) to the previous one (75175) since it’s so fresh in my memory still. I do like that the green one’s MSRP of $29.99 makes it more affordable than its predecessor but the comprimises to get to that price point hurt the set overall. Less minifigs, no maintenance vehicle, fewer stickers (this one really boggles my mind because I can’t imagine the cost of stickers being all that high that including a few more to cover two more fins would have broken the pricing model), yeah sure it’s cheaper, but all of those things added up really make it a lesser experience. It’s the only A-Wing in town, and since it’s tied to the terrible Rise of the Skywalker movie, I can’t score it better than a 3. If I were to rank the three A-Wings I’ve reviewed, this one is dead last, and thus scored accordingly.

There is one A-Wing model I really wanted to add to my review queue and it was from the two pack, 75150 Vader’s TIE Advanced vs. A-Wing Starfighter. It’s based on its appearance from the Rebels cartoon and it looks great. I only bought one of those sets and I can’t seem to find it right now. If I do come across it though, I’ll definitely be adding it to the top of my pile.

It’s worth picking up to complete your collection as long as it’s heavily discounted. I’ve been watching the price of this set and it seems to have settled at $24.49 on Amazon, an 18% discount off of MSRP of $29.99. For 269 pieces, it’s a bit easier to swallow but it feels like it should have been $25 from the get go, and a normal sale price of $19.99. There just isn’t enough there to justify the higher price tag. And if you don’t get one, you really aren’t missing out on anything. FOMO be damned. Don’t take the linked image below as an endorsement, it’s a tradition we link to the product we review no matter the score. We’ll get a small commission if you decide to buy it after clicking the link. 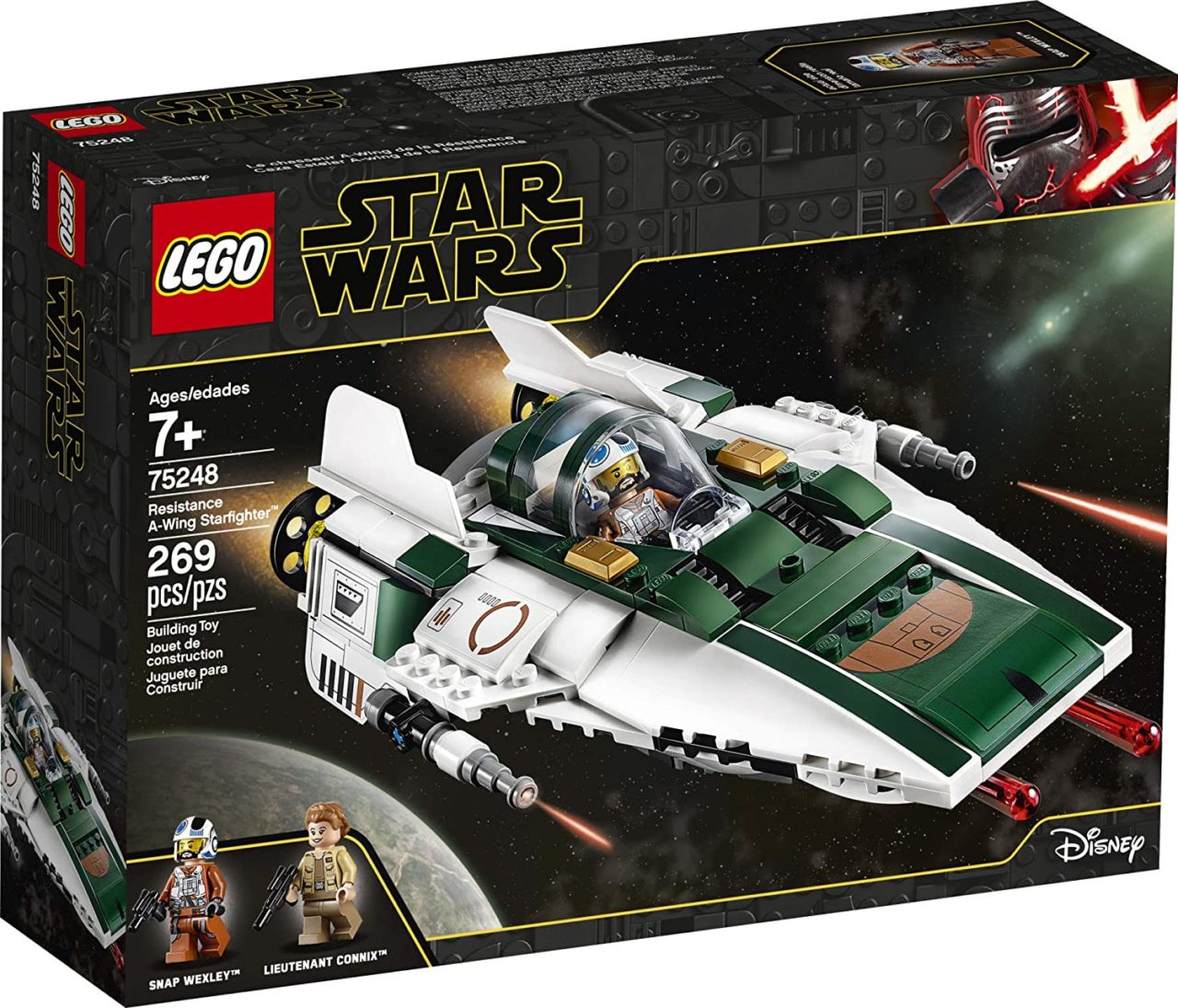 Will if fit into a Ziploc bag?

1 gallon with ease and room to spare. Definitely not a sandwich bag.

All of the Images for 75248 Resistance A-wing Starfighter

I may bundle all three of the A-wings into one giveaway package though. Stay tuned.