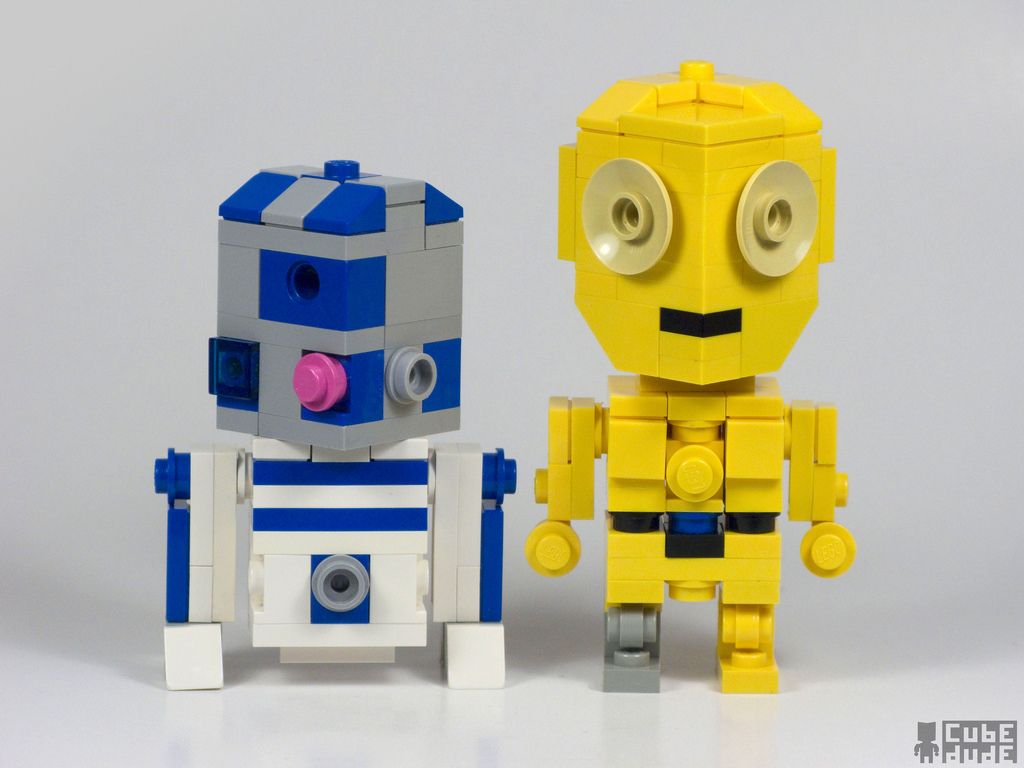 Disney has acquired LEGO Star Wars: Droid Tales from The LEGO Group and will be airing it on Disney XD. This might mark the beginning of the end of LEGO’s relationship with Cartoon Network to air anything LEGO Star Wars related. LSW: DT is a retelling of the Star Wars Saga from Episode I: The Phantom Menace all the way through to Episode VI: Return of the Jedi in five short 22-minute episodes from the viewpoint of C-3PO and R2-D2. Yeah, I don’t get the math either unless they’re totally going to skip everything that happened in Episode I other than Anakin was found. But while you’re trying to wrap your around that, this was revealed later on in the press release:

…the tales of their adventures that led to the events of Star Wars: The Phantom Menace.

Say what? Threepio wasn’t even activated until the middle of Episode I, and R2 was in service on another planet entirely. They shared no adventures previous to The Phantom Menace. Either this is the most half-baked, poorly written, idea to ever get out in a press release, or they plan on doing some serious retconning.

Whatever. Do what you want. We’ll see how much of a disaster this is.

Photo credit goes to Angus MacLane. I had another picture entirely in mind that I wanted to do. Something that involved a LEGO Astromech and tentacles but alas, I am at work and away from my LEGO.

“Since we introduced our first LEGO Star Wars set in 1999, we have seen and heard from countless Star Wars fans who have used LEGO bricks to tell their own version of this timeless story, re-enacting favorite scenes and imagining new story lines,” said Jill Wilfert, vice president of licensing and entertainment for The LEGO Group. “LEGO Star Wars:Droid Tales gives us an opportunity to share highlights of the Star Wars story with a sense of humor and excitement that can only be conveyed through the LEGO brick, and will be a fun resource for families as they gear up for the next movie.”

As its title suggests, Droid Tales is a re-telling of the Star Wars universe through the eyes of C-3P0 and R2-D2. Following their victory celebration in the Ewok village on Endor, seen at the close of Star Wars: Return of the Jedi, C-3PO and R2-D2 have gathered to regale Luke, Leia, Han, Chewbacca and the other Rebels with the tales of their adventures that led to the events of Star Wars: The Phantom Menace. An accidental kidnapping occurs while the droids are reminiscing and suddenly viewers are taken on a new adventure that leads to encounters with familiar faces and places that prompt the re-telling of the entire saga. The series offers all of the playful humor that viewers expect from LEGO Star Wars.

Information on airdates for each episode is not yet available. Additional LEGO Star Wars activities to get the family caught up will launch throughout the year.

About LEGO Systems, Inc.
LEGO Systems, Inc. is the North American division of The LEGO Group, a privately-held, family-owned company based in Billund, Denmark, one of the world’s leading manufacturers of creatively educational play materials for children. The company is committed to the development of children’s creative and imaginative abilities, and its employees are guided by the motto adopted in the 1930s by founder Ole Kirk Christiansen: “Only the best is good enough.” Visit the virtual LEGO world at www.LEGO.com

About Lucasfilm Ltd.
Lucasfilm Ltd. is one of the world’s leading film and entertainment companies. Founded by George Lucas in 1971, it is a privately held, fully-integrated entertainment company. In addition to its motion-picture and television production operations, the company’s global activities include Industrial Light & Magic and Skywalker Sound, serving the digital needs of the entertainment industry for visual-effects and audio post-production; LucasArts, a leading developer and publisher of interactive entertainment software worldwide; Lucas Licensing, which manages the global merchandising activities for Lucasfilm’s entertainment properties; Lucasfilm Animation, which is currently producing content for film and television, including Star Wars: The Clone Wars, a CG-animated half-hour television series; and Lucas Online creates Internet-based content for Lucasfilm’s entertainment properties and businesses. Additionally, Lucasfilm Singapore, produces digital animated content for film and television, as well as visual effects for feature films and multi-platform games. Lucasfilm’s motion-picture productions include three of the 20 biggest box-office hits of all time and have received 19 Oscars and more than 60 Academy Award nominations. Lucasfilm’s television projects have won 12 Emmy Awards. Lucasfilm Ltd. is headquartered in San Francisco, Calif.

STAR WARS, Star Wars: Rebels and related character names are trademarks and/or copyrights, in the United States and other countries, of Lucasfilm Ltd. and/or its affiliates.
Â©2015. TM & Â© Lucasfilm Ltd. All rights reserved.