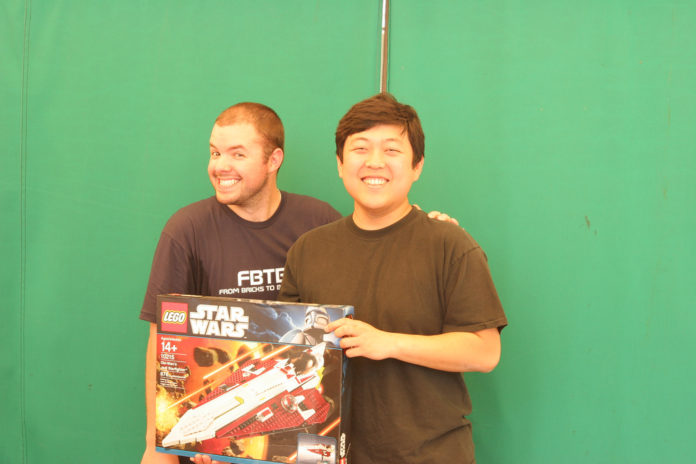 Bothcon 2011 came and went and a good time was had by all.

Bothcon got off to good start slightly behind schedule due to the massive crowd at the park preventing one attendee from entering the park in a timely manner. But not a big deal as I picked up the stragglers while making my way to our event area.

After a very brief introduction, the attendees were each given their set: a copy of 8095 General Greivous’ Starfighter.

The first part of the competition was a Speed Build. Forum member Hye (Hao Ye) came in with an impressive 29 minute build and won a copy of 10215 Obi-Wan’s Jedi Starfighter for his efforts. Much better than the 2 hours that it took Solo to build the master copy. Congratulations, Hye!

Next up was the Creative Build. Taking the same Greivous Starfighter set, build an alternate model of a starfighter in the shape of a letter. An impromptu Alphabet Fighter contest. The attendees were given 45 minutes to build. While there were some really impressive entries, there was one outstanding model built by Trooper10 (Chris White). Inspired by the V-19 Torrent set, it was a transforming Y-wing that was fully functional, solidly built, and just blew us away. We were told by one of his table mates that he had actually finished the model in 30 minutes and spent the rest of the time adding greeblies and fine tuning the ship. Solo shot a video of his model transforming, above. His prize consisted of a copy of 10198 Tantive IV. Congratulations, Trooper10!

There was a third prize, of which I regrettably did not take pictures of. After the Creative Build, I instructed the attendees to reach inside their goody bag and retrieve their M-wing kit. Every goody bag had an M-wing kit but there was one kit that was extra special. The elements in that kit were all white. We even made an all white Bothcon commemorative minifigure Ace to go with it. Whoever was lucky enough to get the all-white M-wing kit won a prize package consisting of Chrome Darth Vader, Chrome Stormtrooper, Chrome C-3PO, White Boba Fett, San Diego Comic Con Cube Dude set, and Star Wars Celebration V Cube Dude set. That winner was Datoth (Jason Daubert).

I’ve emailed Jason and asked him to send me some pics of his special M-wing, pilot and prize package. Congratulations, Datoth!

Finally, it was a real treat to meet with each and every one of the attendees. We learned a lot about running this event and despite some of the hiccups, I hope that everyone had a good time. My favorite moment of the event was when announcing the winner of the Creative Build, everyone applauded Trooper10. My least favorite moment was forgetting to take a picture with all the attendees. I might need to hire someone to just take pictures and record the minutes of Bothcon for next year.

I’d like to give a big thanks to LEGO for providing the sets, prize packages and more free stuff for the epic goody bags. I’d also like to thank LEGOLAND CA for providing the venue and hosting our mini convention.