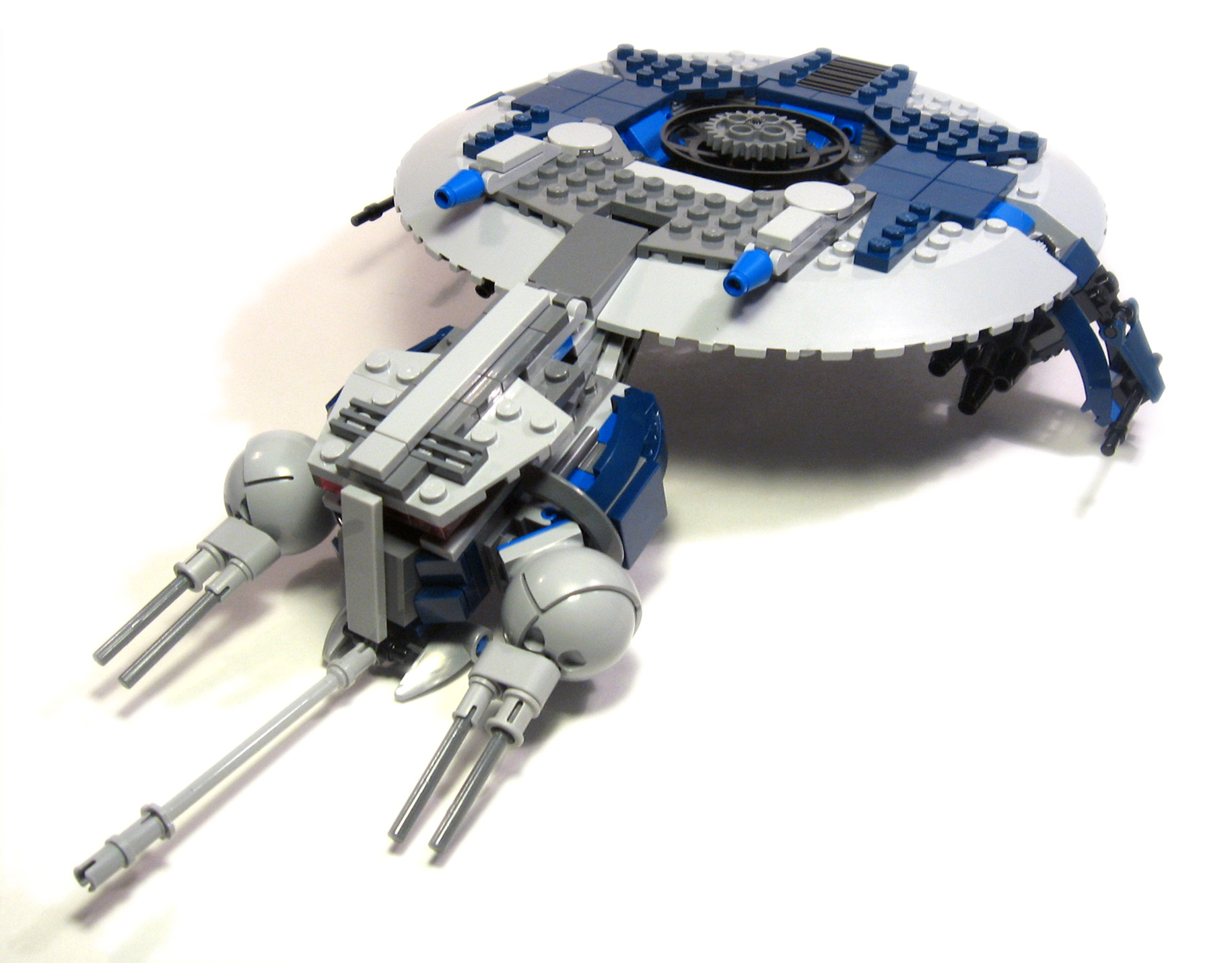 When I first heard there was going to be a Separatist gunship in Episode 3 during the battle of Kashyyyk, I remember thinking â€œHa! Droid gunship? No way that could take on a Republic gunship!â€ I didnâ€™t think the Separatists could come up with anything that could top the Republic Attack Gunship for sheer firepower and awesome. Then I saw the movie, *briefly* glimpsed the droid gunship in it, and thought nothing more of it. Its role was so small, and we didnâ€™t get to see the inner workings of it like we did the RAG. Simply put, I didnâ€™t know *what* to think of it anymore. â€œMehâ€ would be a fitting description.

Putting this set together, I thought back to those first impressions. Were they right?

Since the days of Episode 3, Iâ€™ve seen a picture of the droid gunship that was actually a rejected piece of Republic Gunship concept art. I donâ€™t know that the disk+cockpit design worked any better as a Republic ship than as Separatist, honestly.

Speaking in just design terms, the Trade Federation and Separatist forces have generally tended to have insect- or animal-like designs. Like the dragonfly-esque Trade Federation lander, the elephant-like MTT, and more. I donâ€™t see anything like that here. Am I missing the influence? Itâ€™s a big radar dish with an cockpit that sticks out the front. Nothing special. To me, it just doesnâ€™t have the â€œoomphâ€ of the other Separatist designs, or of the Republic Gunship.

To conclude my opening thoughts, when you call something a gunship, itâ€™s asking to be compared to the Republic Gunship, and frankly, this design and set pales. This is a $30 (US) set, compared to the original 7163 RGS for $90 (US) and newer 7676 RAG for $130 ($US) and simply canâ€™t stand up to the amount of detail and figures that go into those sets. So the comparison to the Republicâ€™s gunships stops here. As Lego sets, theyâ€™re simply not in the same league.

On to the proper review.

Setting aside the fact that the RGS and Droid Gunship are at two vastly different price points, at $30 (US), and 329 pieces, this set falls right about in line with what Iâ€™ve come to expect from Star Wars sets. Nothing surprising, nothing shocking. I didnâ€™t mind picking it up for MSRP, and I shop for sets on sale about 90% of the time. The price to parts ratio is about 10 cents per part, following the â€œGolden Ruleâ€ of price-to-parts ratios; nothing ridiculous like the Solar Sailer thatâ€™s so belittled of late.

Dumping out the parts to prep for the build, I knew immediately I was in for a good time. The main â€œdishâ€ of the gunship is built with the recent quarter-circle slopes in light bley, and since I didnâ€™t own a single one at the time (since the time I built this set, Iâ€™ve purchased a number of these in black and dark blue,) so I was excited for some new parts.

Based on the box art I knew the underside had some kind of bombing mechanism, I just didnâ€™t now how it worked. During the build, the groundwork for the bomb-dropper is laid fairly early on (as with the Clone-in-the-Box bouncey gunnerâ€™s chair I talked about in my Republic Fighter Tank review,) and I was really curious how it would play out later. As I finished the set, I was really impressed with the mechanism and the clever methods used. Rubber bands always amuse me in sets.

The gear under the main dish of the Droid Gunship turns when a gear on top is turned. This retracts the technic axles, dropping the bombs. I absolutely loved this feature. If you donâ€™t know this about me already, Iâ€™m a sucker for play features. Generally, I tend to not build or buy display models so much as sets that I (or kids) can play with. See below for video of the bombing action:
Bombs away!
The set is fairly accurate, and features many of the same dark blue markings as the original art. Some of the proportions seem off (larger dish in the original) but otherwise it looks like every major and minor element of the design is represented in Legoâ€™s set.

How about the swoosh factor? Most people might be inclined to grab the gunship by the dish and whoosh it around, but I found myself desiring a better place to hold it on the underside. Holding it by the cockpit is no good, because the hinge connection between the cockpit and main dish isnâ€™t strong enough for even mild swooshing: it will disconnect quite easily, which is one of the only problems I had with the set.

Speaking of the cockpit, or â€œheadâ€ of the gunship, I found this to be one of the funnest parts of the build. I love me some SNOT, and the head is a solid example of it. I didnâ€™t even know the cockpit held a droid pilot until I built this subassembly, and I was most impressed as I finished it up.

And since Iâ€™m on the subject of droids, here are the two minifigs that came in the set.

Nothing new here, as with the clones in the Republic Fighter Tank. But old isnâ€™t bad, because these figs are certainly appropriate for the set. Also, since battledroids are more parts than minifig, Iâ€™ve scored them slightly higher than the clones in the Tank review.

All in all, this is a solid entry in the Clone Wars line, with great newish parts (light bley quarter circle slopes and some lovely dark blue!) and easy-to-follow instructions. The play features are fun (bomb drops, multiple movable weapons, opening cockpit) and the minifigs are just right for the set. If not for the weak connection between the cockpit and main body, this set would have a higher build quality score (and swoosh factor!) from me. And at $30, something you should have no second thoughts about purchasing right now