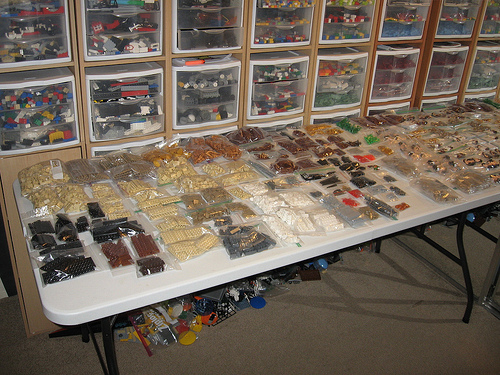 Tonight we will undertake the first official FBTB Parts Draft! Will it be a huge success, or will we be crushed under the weight of an idea too awesome for it’s own good?

Whether you are one of the 10 draft participants or just want to spectate tonight, everyone needs to know the game plan:

Some of this info is going to repeat what was posted previously, but it’s important stuff and I’ll try to be more concise.

What we’re drafting: From the Prince of Persia line: ten 7571 Fight for the Dagger and ten 7570 Ostrich Race sets. Each participant is essentially bringing 2 sets to the table. Here is the inventory we are following.
When: 7-10pm PST Wednesday, January 12, 2011
Where: In real life? My Legoratory. Online? In the FBTB IRC chat.
Who: FBTB members Inzane, MisterFubar, J30Spiff, buriedbybricks, doodguy, Daz Hoo, mr_joshua, unmovedmover, Jargon, and Andi.

To Spectators:
-We’re going to allow spectating of the event because of the immense amount of curiosity it’s garnering across the AFOLtubes. It’s new and interesting and it should be fun. But because this is the first time we’re all doing this, please bear with us as there will undoubtedly be little kinks to work out throughout the night.
-Spectators will be allowed into the special draft room on IRC, but will not have the ability to post messages while the draft is in progress. Only the organizers and the draft participants will be able to talk, to avoid clutter during the activity. A moderator will field questions that can be answered in the chat between parts choices.

To Participants:
-All participants must be present in the IRC chat at the designated draft time (7 pm PST.)
-The order will be determined by a random drawing of names by me, the draft organizer.
-All participants MUST have an inventory in front of them during the draft. Participants need to cross off items after each person’s turn.
-Once the order is decided, the first participant will select a pile of parts, then the second participant chooses, then the third, and so on, until we get to the end of the list. Then we work our way back up the list from bottom to top. Then top to bottom. Continue serpentine until all parts are gone.
-There are 140 lots of pieces, minifigs, and animals. Everyone will have 14 choices.
-No whining. I’ve tried to make this as fair as possible. If you don’t get a part you want, find another part you like.

If this is successful, expect another draft to happen soon!