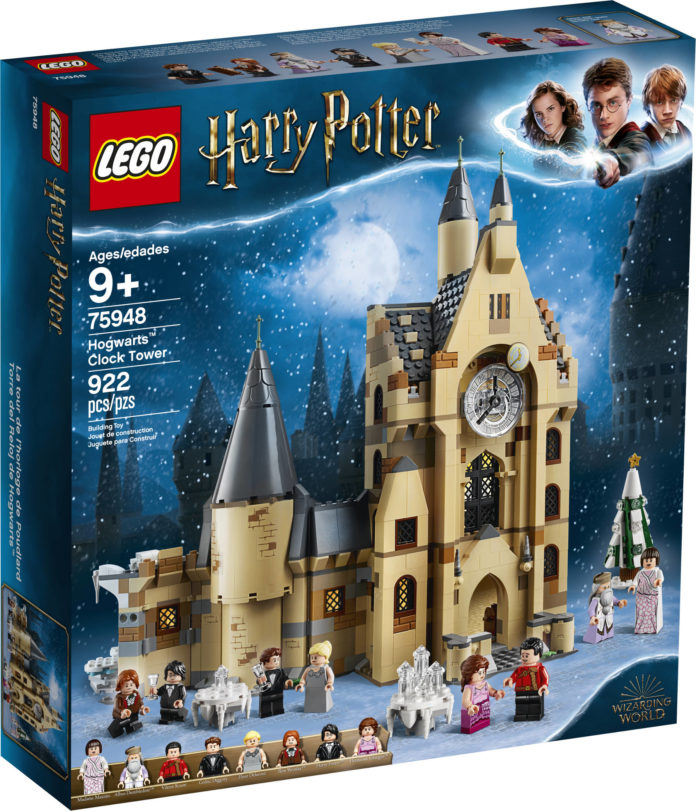 Beginning August 1st, you can purchase new Harry Potter sets! The Advent Calendar mentioned in the title won’t be available until a month later on September 1st, which is, I’m pretty sure, when LEGO’s other advent calendars go on sale. 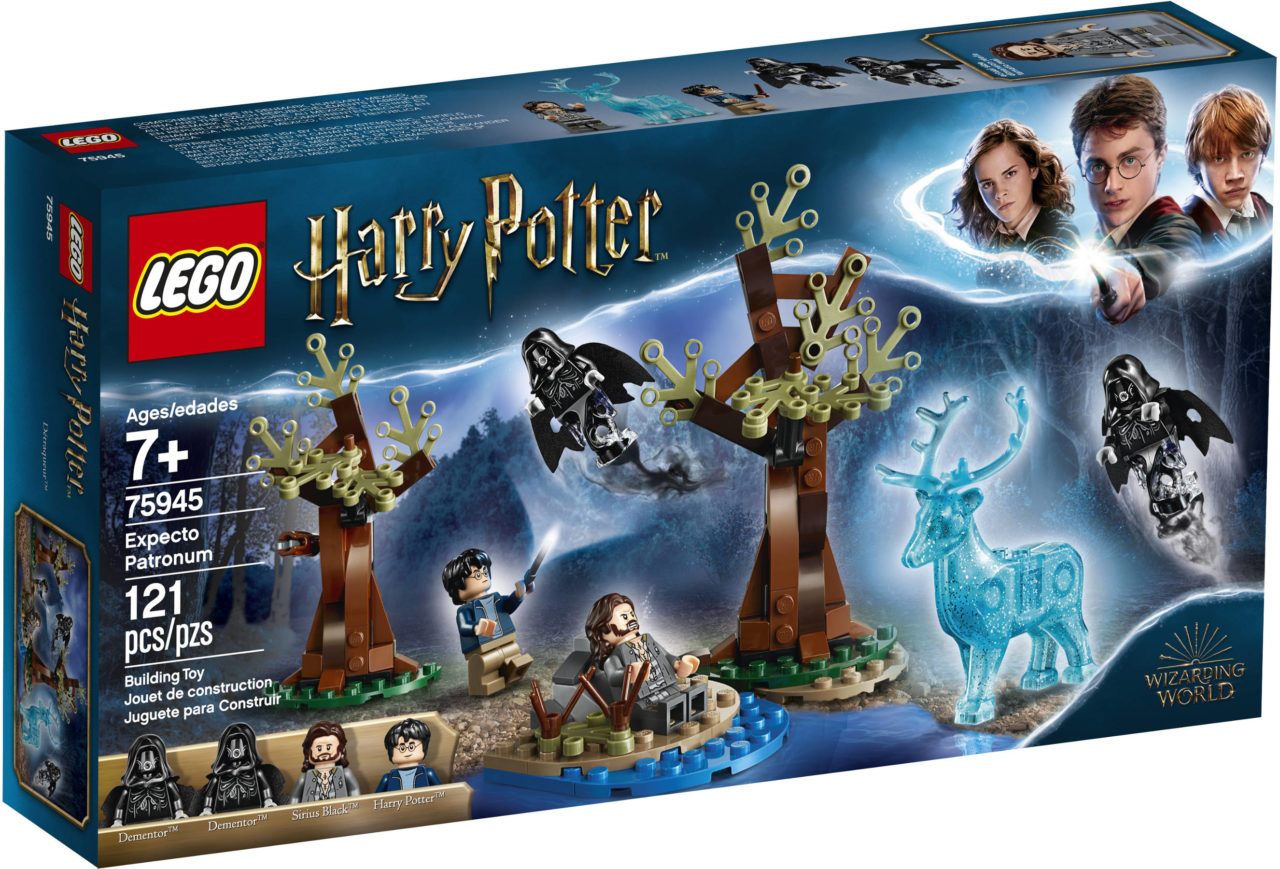 Transport fans of Harry PotterTM aged 7 and over to a magical world of wizards, DementorsTM and mythical creatures with this LEGOÂ® Harry Potter 75945 Expecto Patronum building set. Kids will love the details in the Great Lake Forbidden Forest scene, firing the Expecto Patronum spell at the 2 Dementor minifigures, and summoning Harryâ€™s Patronus charmâ€”a new-for-August-2019 stag figureâ€”to ward them off his godfather, Sirius BlackTM. With 4 minifigures and endless magical possibilities, this Harry Potter LEGO set will conjure up a magical world of imaginative play. 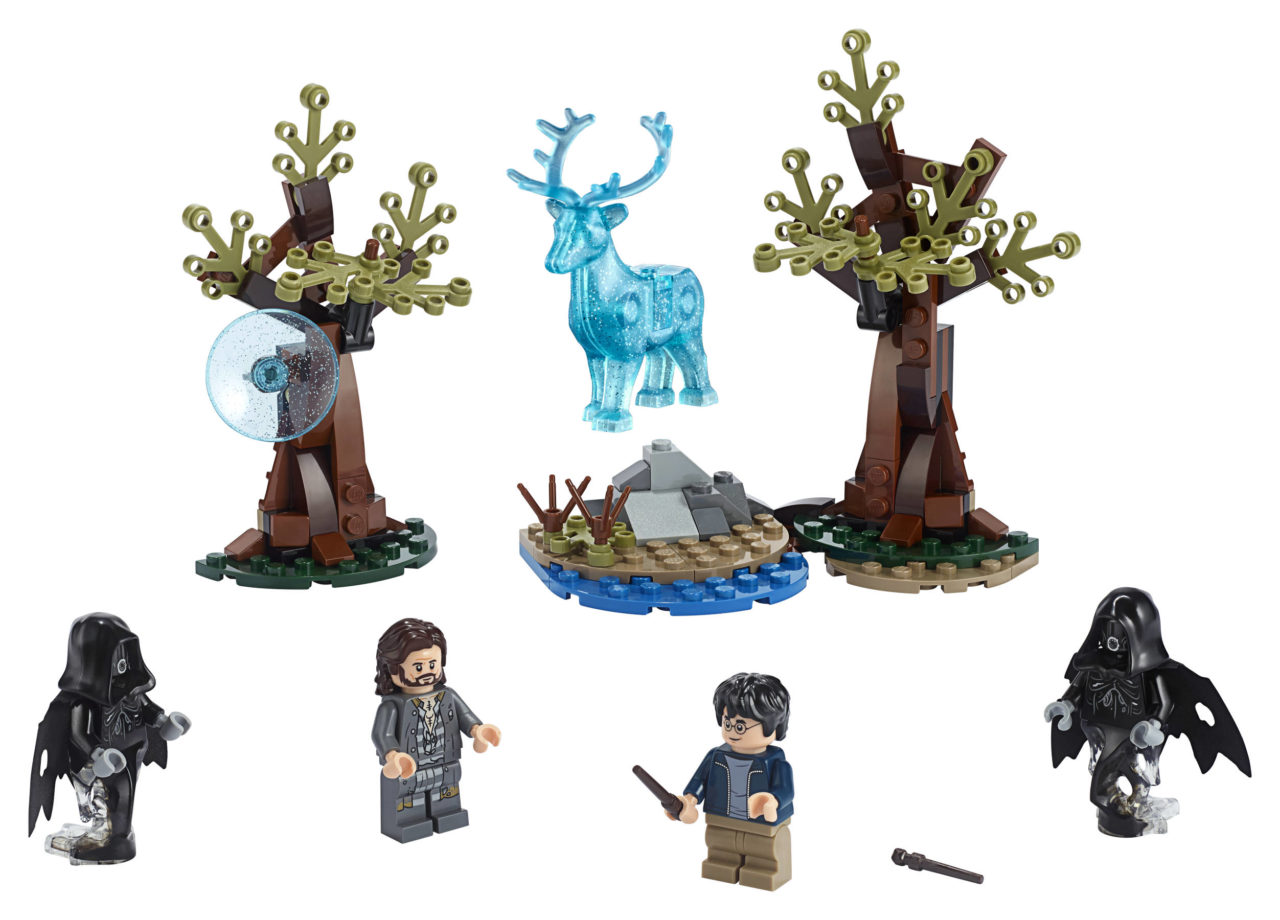 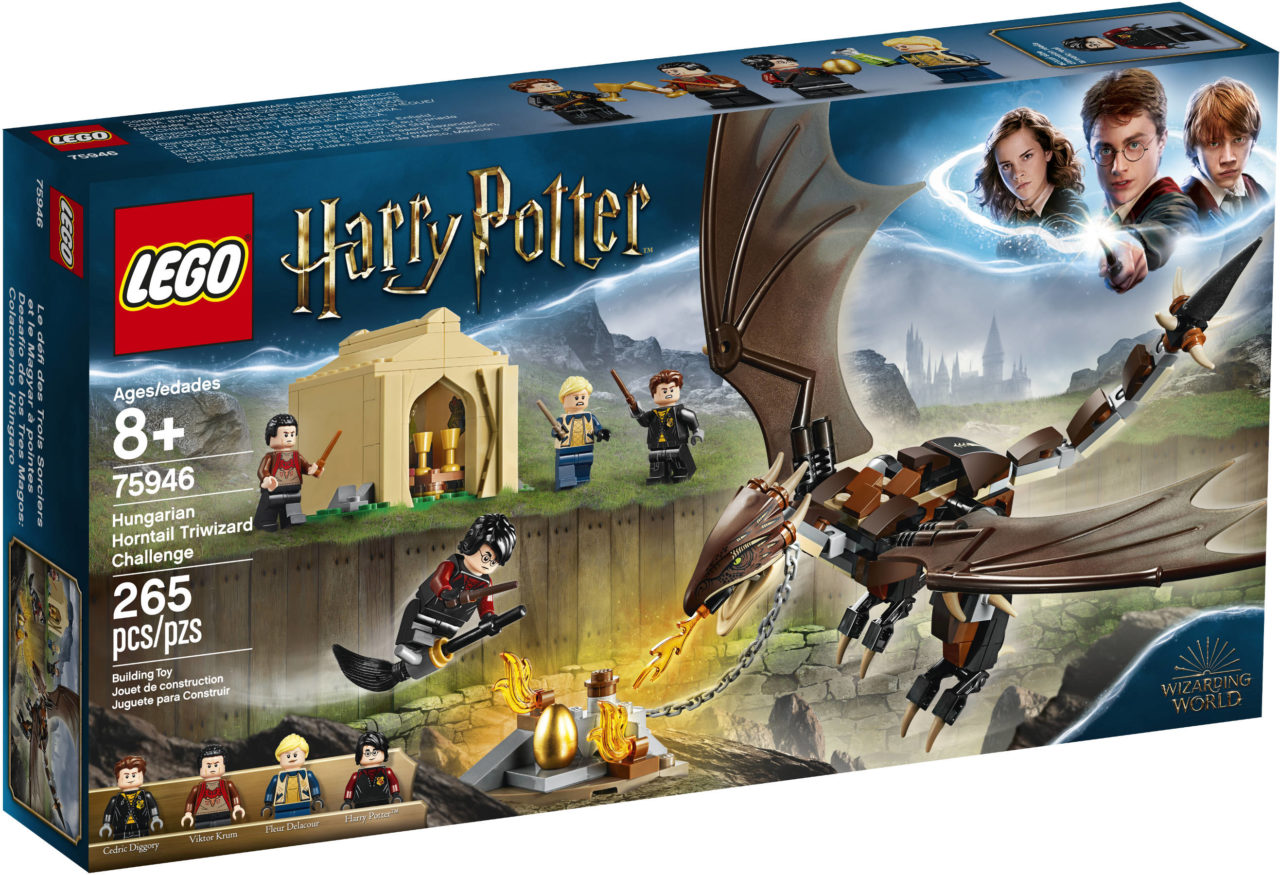 Young witches and wizards can battle a Hungarian Horntail dragon with Harry PotterTM!

Give your young Harry PotterTM fan the chance to battle one of the most dangerous dragons in the wizarding world. The LEGOÂ® Harry Potter 75946 Hungarian Horntail Triwizard Challenge is a gift for kids filled with magical adventures. Anyone aged 8 and over will love helping Harry compete against rival students from other schools of magic, as they strive to retrieve the mysterious golden egg. But thatâ€™s not all. Thereâ€™s a Hungarian Horntail dragon to defeat! With its moveable limbs and wings, itâ€™ll take quick- thinking wizardry to outmaneuver this ferocious beast. With 4 minifigures included, this Harry Potter LEGO dragon set will inspire endless imaginative adventures. 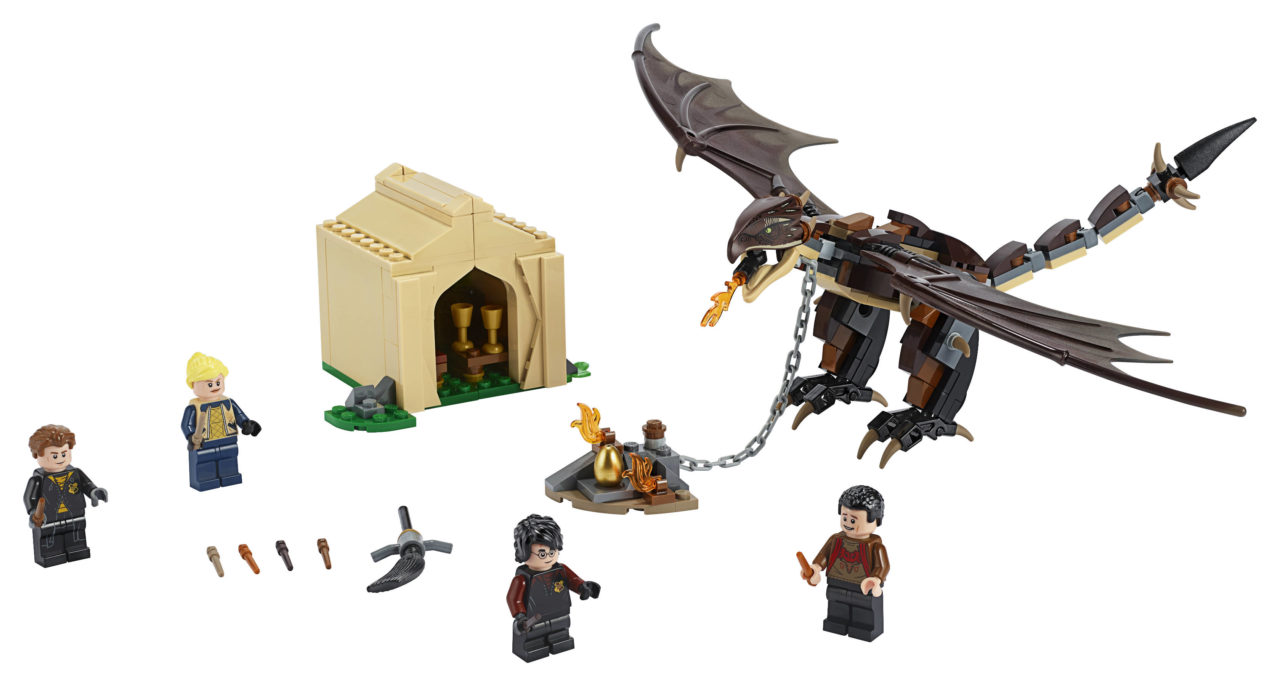 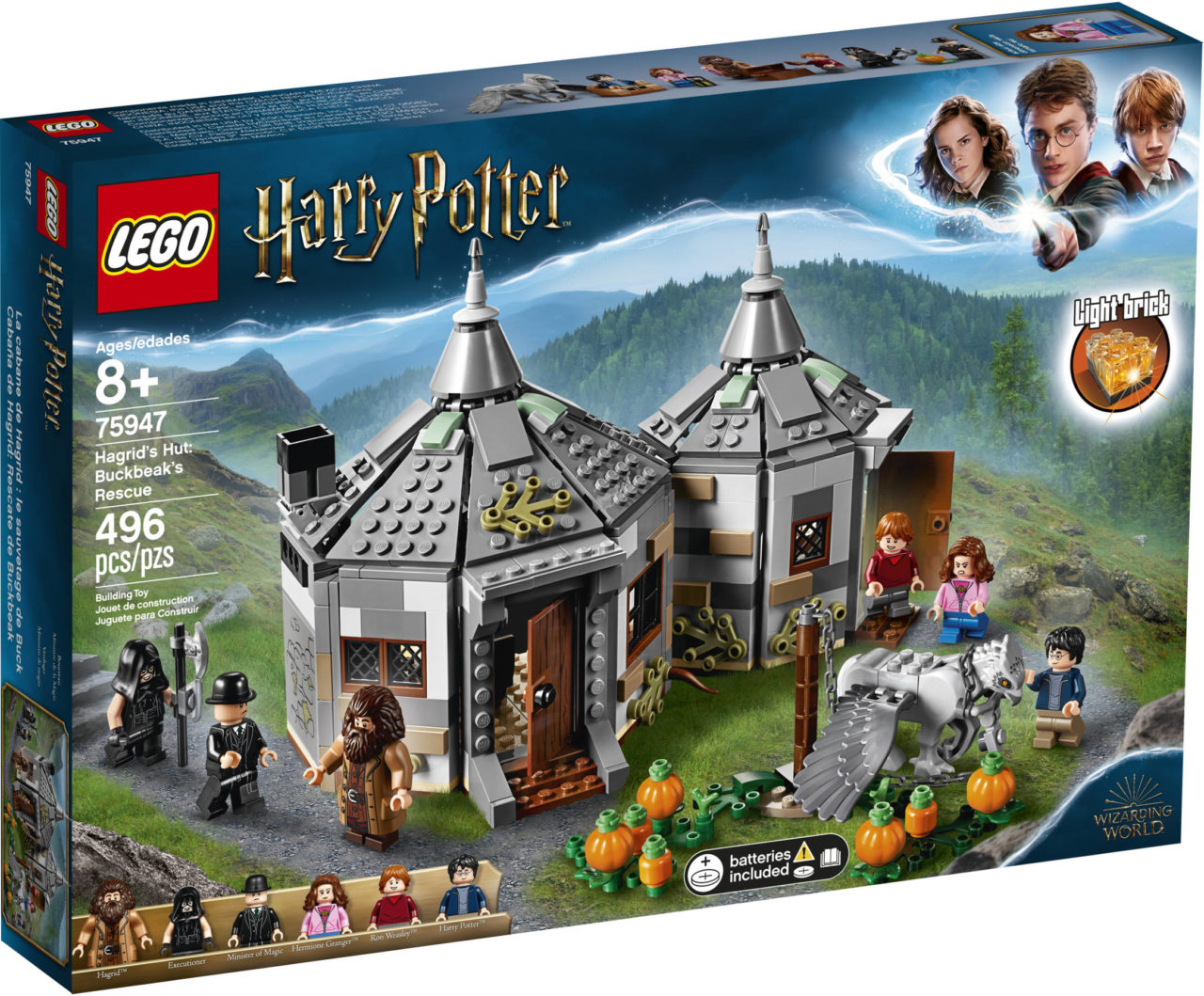 A visit to Hagridâ€™s hut leads to a daring Hippogriff rescue!

Young witches and wizards can recreate magical scenes from Harry PotterTM and the Prisoner of AzkabanTM with the LEGOÂ® Harry Potter 75947 Hagridâ€™s Hut: Buckbeakâ€™s Rescue playset. This cool toy for kids gives Harry Potter fans aged 8 and over endless opportunities for imaginative role-play. They can explore the detailed interior of Hagridâ€™s hut, hide behind Hagridâ€™s pumpkin patch when the Minister of Magic and the Executioner arrive, then rescue BuckbeakTM the Hippogriff from the Executionerâ€™s axe. The magical adventures will never end with this Harry Potter LEGO set. Includes 6 minifigures, a buildable Buckbeak figure with moveable wings and head and a host of accessories and features including a button-operated light brick for the fireplace. 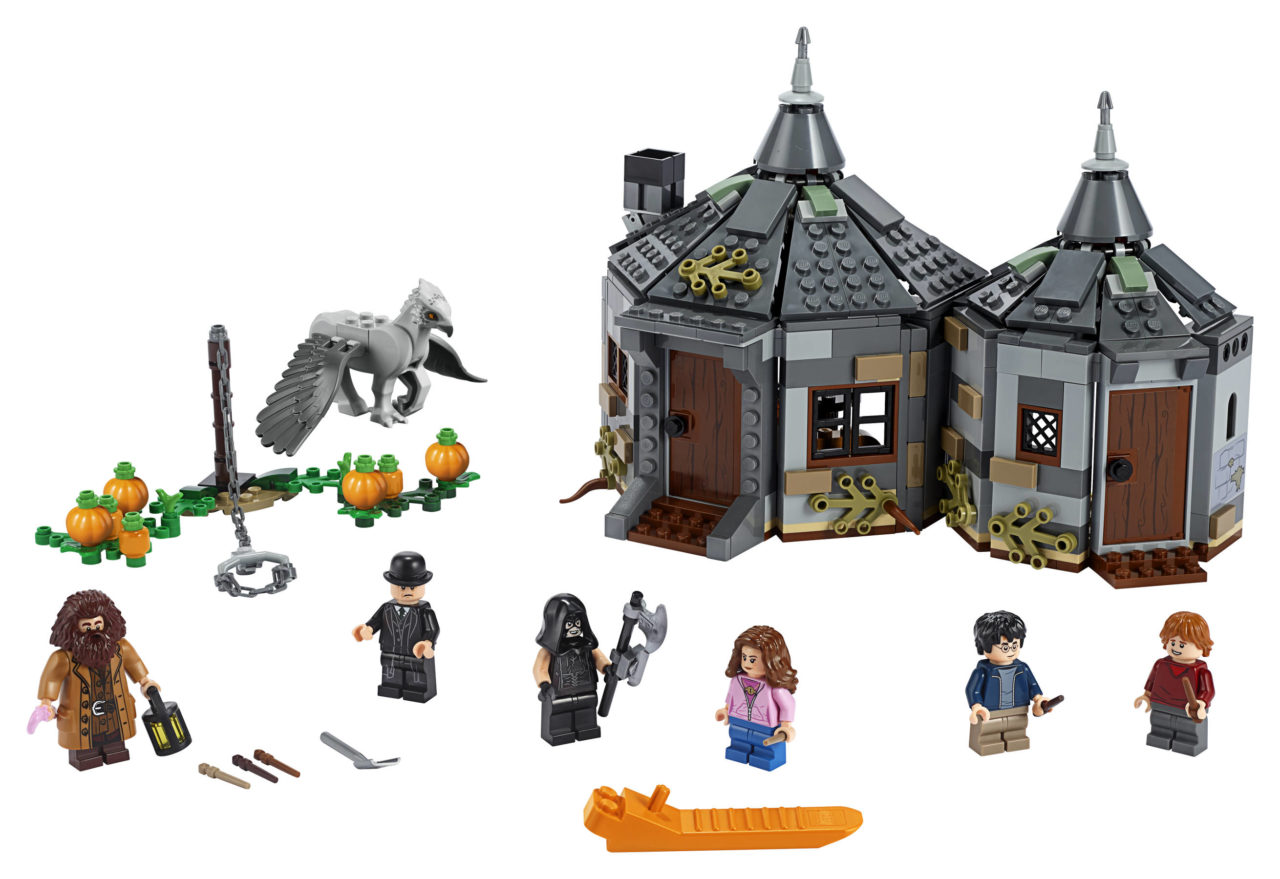 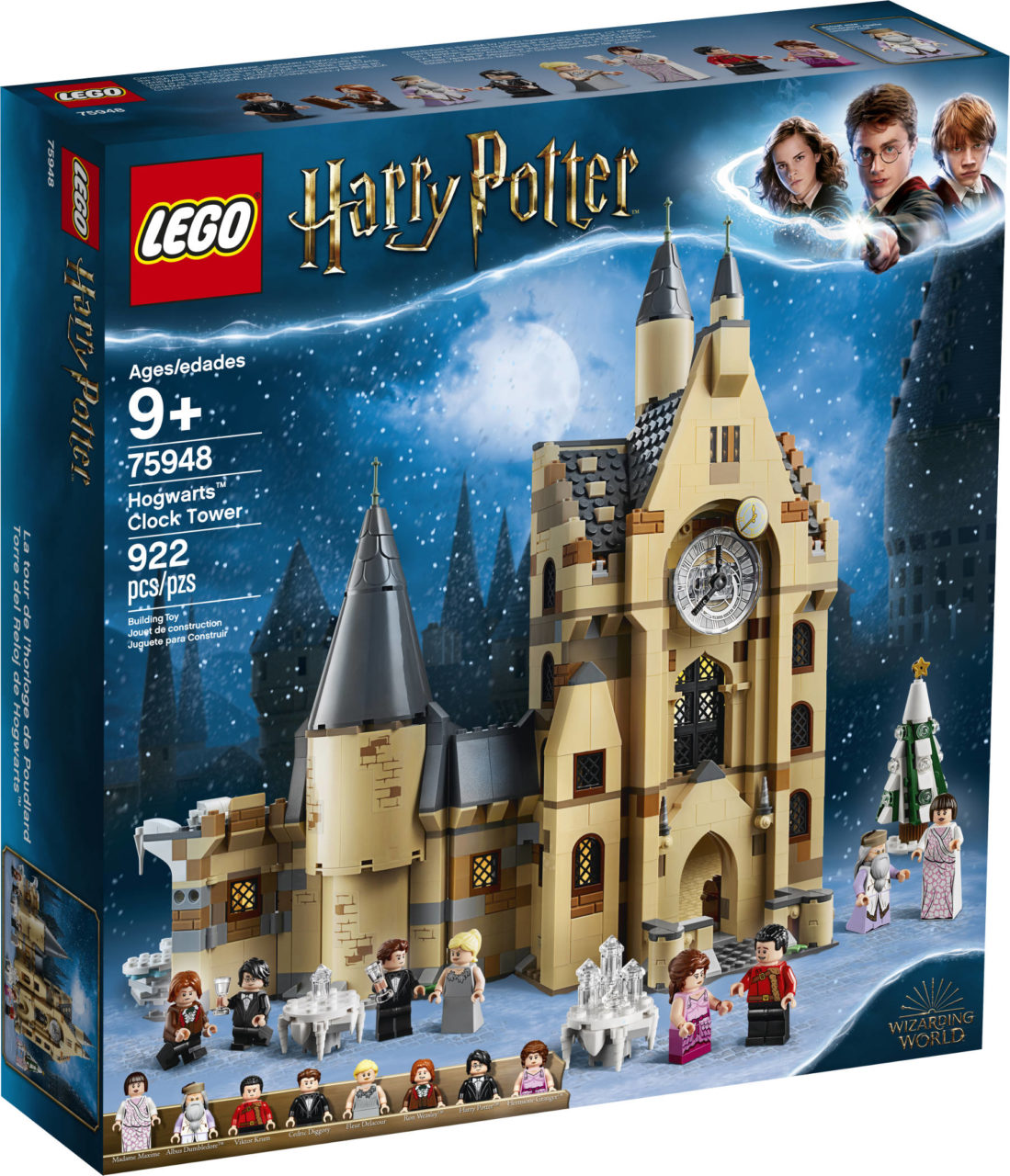 Transport fans of Harry PotterTM aged 9 and over to a magical world inside the LEGOÂ® Harry Potter 75948 HogwartsTM Clock Tower set. With 8 minifigures and iconic locations from Harry Potter and the Prisoner of AzkabanTM and Harry Potter and the Goblet of FireTM, kids will be immersed in a world of imaginative play. Whether visiting Dumbledoreâ€™s office or attending a Defense Against the Dark Arts lesson, traveling through time by resetting the tower clock or unwinding at the Yule Ball by operating the â€˜danceâ€™ function… once they enter the Hogwarts Clock Tower, theyâ€™ll never want to leave!
â€¢ Includes 8 new-for-August-2019 Harry PotterTM minifigures: Harry Potter, Ron WeasleyTM, Hermione GrangerTM, Fleur Delacour, Cedric Diggory, Viktor Krum, Albus DumbledoreTM and Madame Maxime. 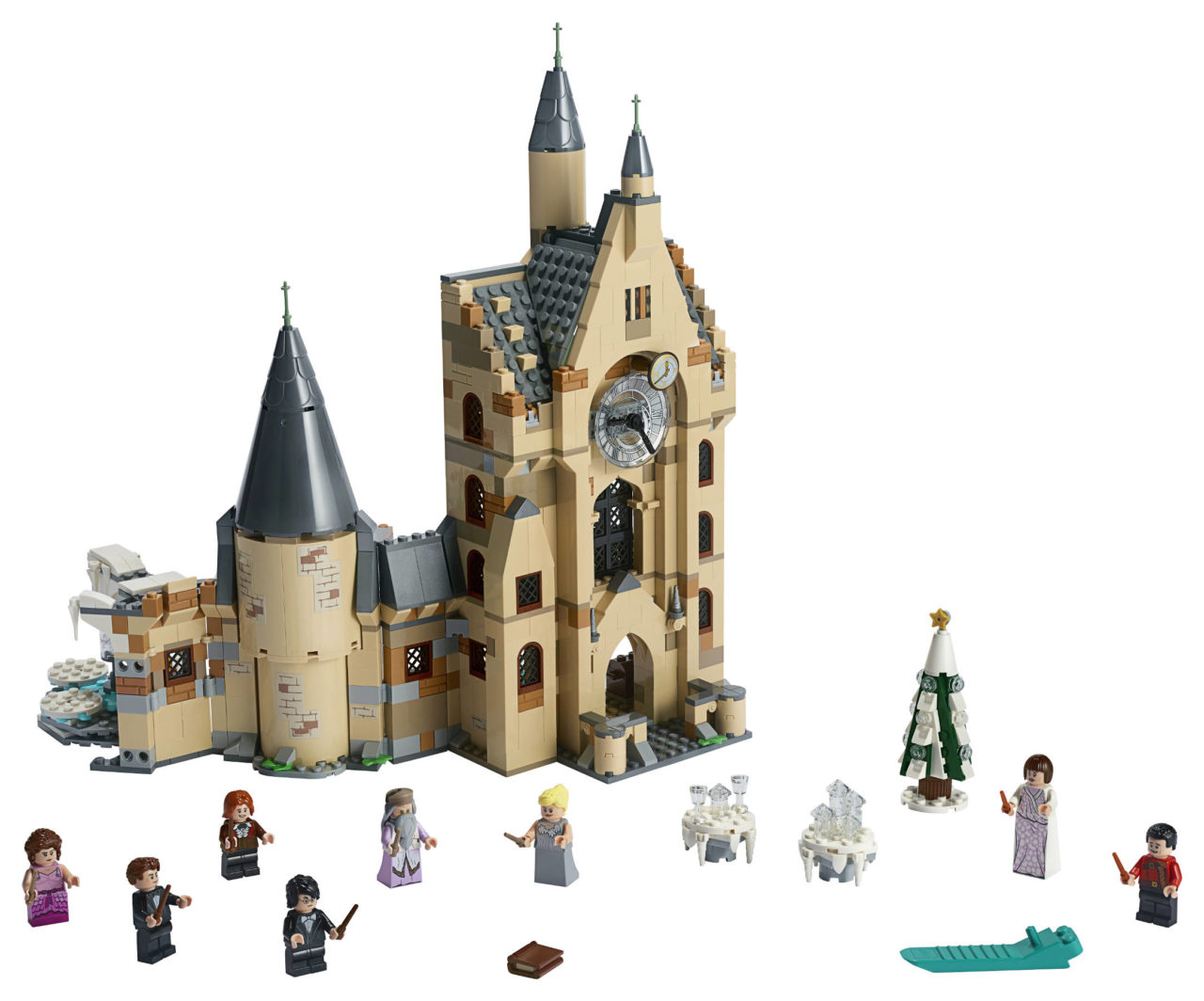 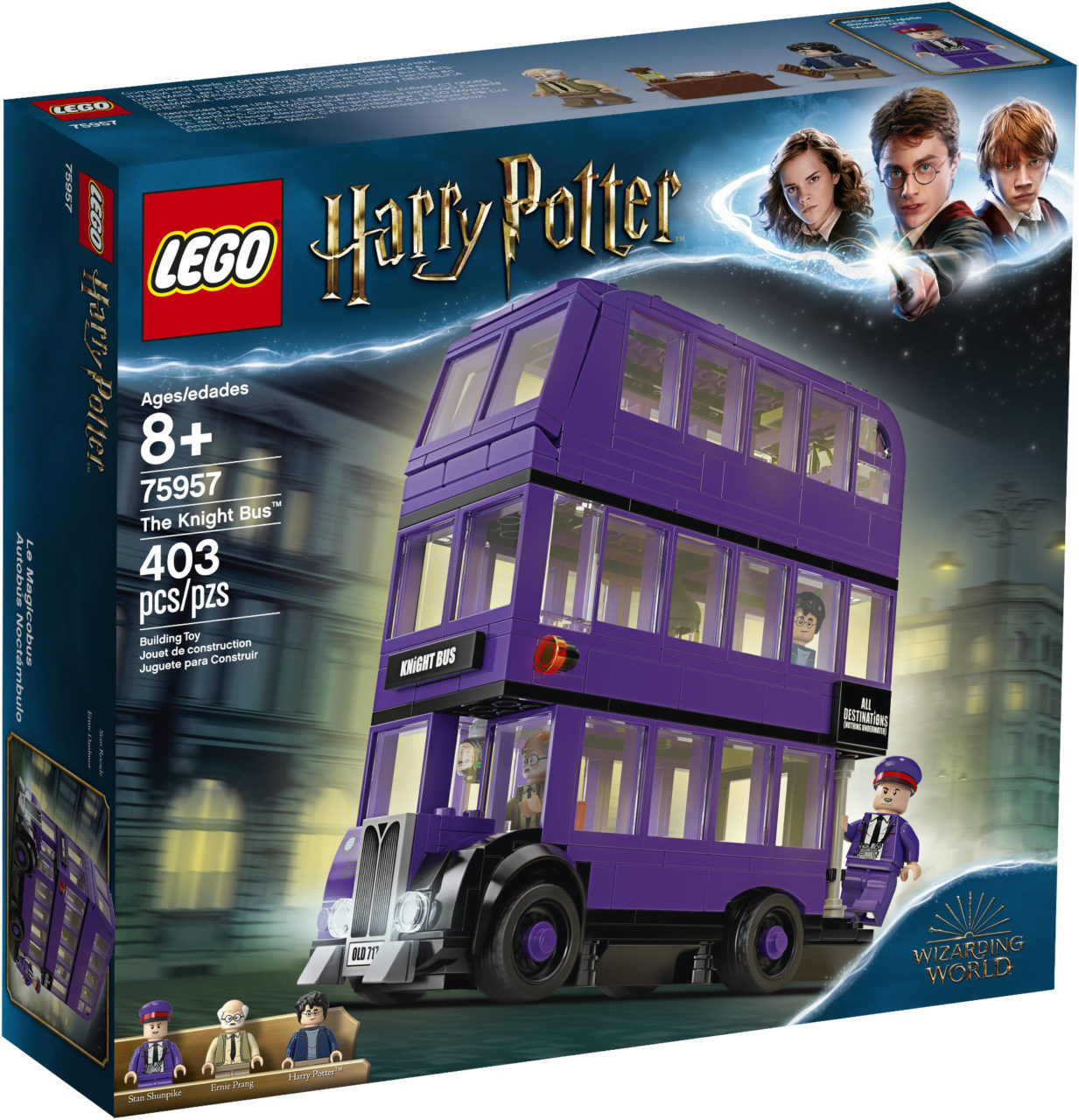 Give young wizards and witches a wild ride aboard the Knight BusTM with Harry PotterTM!

Give your young witch or wizard the ride of their life aboard the 75957 Knight BusTM! When kids catch the purple triple-decker bus, they know theyâ€™re in for a wild ride. With a hinged side panel for easy access to the interior, and a removable roof to reveal the upper deck, this magical toy bus playset is bursting with play potential. Once Harryâ€™s trunk has been loaded, itâ€™s time to hold tight. As the vehicle races away, swerving around corners and bouncing over bumps, kids will love how the bed slides back and forth and the chandelier swings from the ceiling. Includes 3 minifigures. 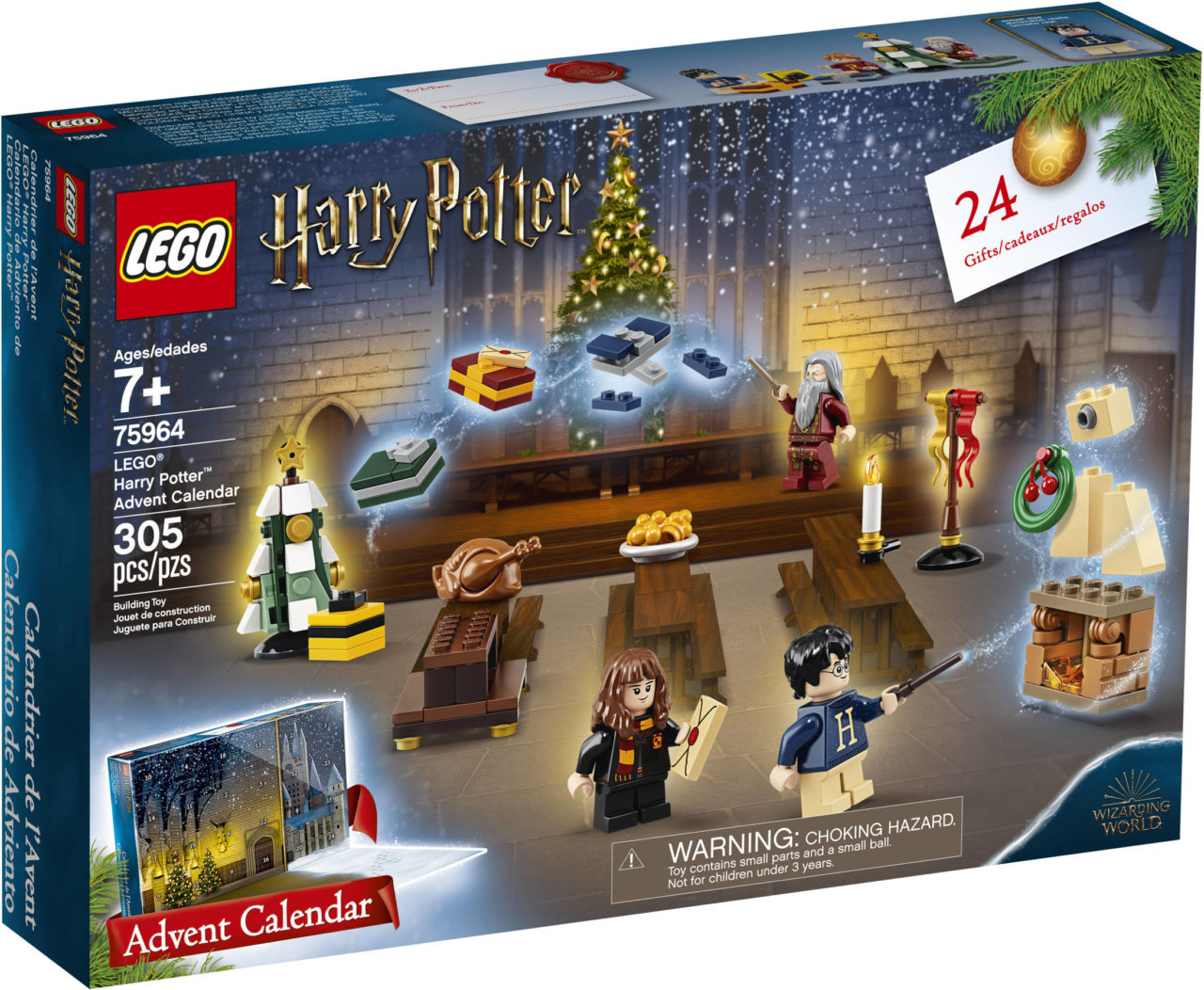 Give LEGOÂ® Harry PotterTM fans a magical build-up to Christmas with this awesome advent calendar!

Celebrate Christmas in the Wizarding World with a magical surprise LEGOÂ® Harry Potter toy every day for 24 days! Behind each door is a different LEGO Harry Potter holiday gift to open, build and play with. Each day delivers a favorite character, familiar object or awesome accessory from the Harry Potter series, so you can create HogwartsTM holiday adventures of your own! 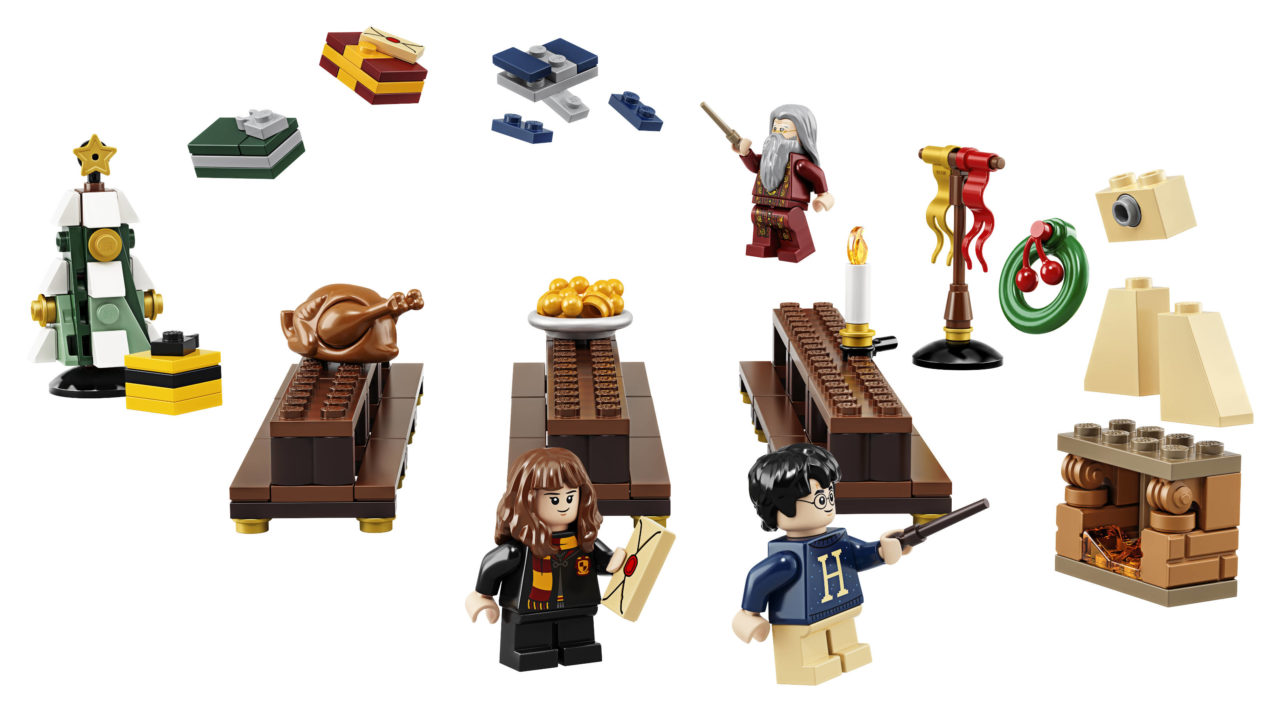