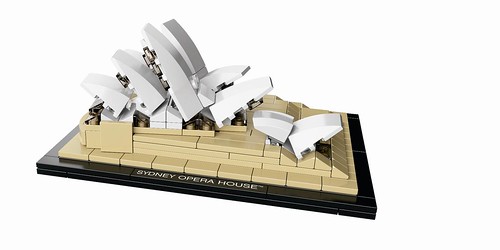 BILLUND, Denmark â€“ The Sydney Opera Houseâ„¢, a masterpiece of late-modernist architecture that is admired internationally and treasured by the people of Australia, has had its famous sculpted curves recreated by LEGOÂ® Architecture.

Sydney Opera House was created by JÃ¸rn Utzon, a young Danish architect who understood the potential provided by the site against the stunning backdrop of Sydney Harbour. The massive concrete sculptural shells that form the Sydney Opera Houseâ€™s roof appear like billowing sails filled by the sea winds. Utzon envisaged it as a Gothic cathedral that people would never tire of and â€˜never be finished withâ€™.

The LEGO version of the Sydney Opera House seeks to capture the essence of this grand building in a small scale. The LEGO Architecture range, which now features 13 models, uses the iconic LEGO brick to interpret the designs of iconic architecture around the world. Like the other models in the range it was created by Adam Reed-Tucker

Sydney Opera House is not only a building with great beauty but it has also become known throughout the world as a symbol for not only a city, but a whole country. â€œFor us it was an obvious choice to include it in our collection, both because of its significance in the architectural world and its importance within Danish Architecture,â€ says Daiva Staneikaite Naldal, Senior Business Manager LEGO Architecture.

â€œSydney Opera House strives to take people on a journey from the ordinary to the extraordinary, whoever and wherever they are, and this licensed range is a great example of how we can deliver our brand to a global audience. Weâ€™re delighted people from around the world can now build a LEGO brick replica of the House.â€

LEGO Architecture products features well-known buildings, and the work of important architects Aimed at inspiring future architects, engineers and designers as well as architecture fans around the world, the range contains a booklet featuring step-by-step building instructions that is prefaced by exclusive, archival history, information and photographs of each iconic building, its design origin, its architect and its architectural features.

The LEGO Sydney Opera Houseâ„¢ is available for purchase from March 1 in LEGO brand retail stores, LEGOLAND Stores and online at https://shop.lego.com/. The product is designed for ages 12+ and will include a content-rich booklet with facts and history of Sydney Opera Houseâ„¢. Recommended retail price is $39.99 or â‚¬39.99

ABOUT THE LEGO GROUP

The LEGO Group is a privately held, family-owned company, based in Billund, Denmark. It was founded in 1932 and today the group is one of the world’s leading manufacturers of play materials for children, employing approximately 10,000 people globally. The LEGO Group is committed to the development of children’s creative and imaginative abilities. LEGO products can be purchased in more than 130 countries.