The race is going strong and the pods just completed the first lap…ï¿½ Four of the more stylish pods are leading the pack, followed by an unlikely pirate racer that held it’s position while the rest jostled around him. The fierce looking Spearit made the biggest jump in the ranks, up 21 positions (and from the looks of it I’d guess he was ramming entries out of his way). The quad-engine pod made the second biggest advance seen in the first lap – maybe the risky configuration will pay off in the end! Rounding out the top eight is the crazy crossover Sparrow… no word on if Patsy managed to keep up. 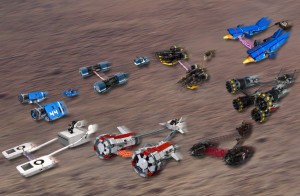 Stop by the second lap poll thread in the forum to see the rest of the rankings and cast your votes!