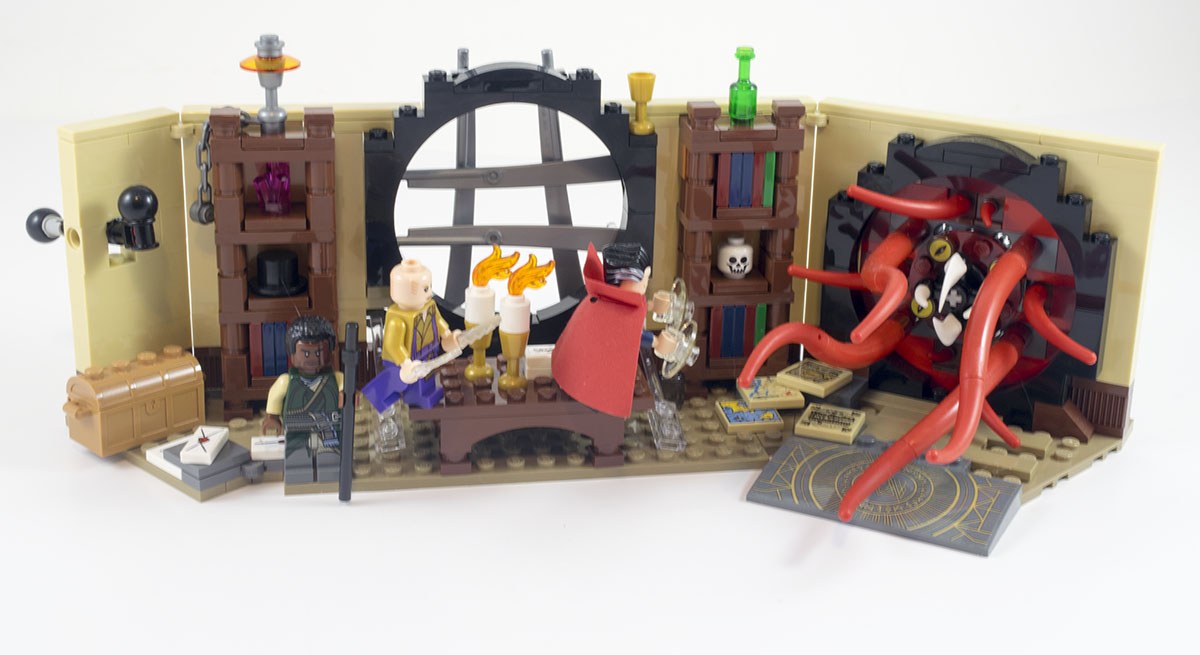 Originally, I wanted to review 76060 Doctor Strange’s Sanctum Sanctorum with a video, but it turns out that editing videos is kind of hard (and I’m terrible at it). Some day, I’ll end up creating a video for these (and still writing, because I prefer written reviews and I know we have some Bothans that need caption support, and we love all of our Bothans)… but for now, sticking to the written word. Of course, in the world of Doctor Strange, that could be a very dangerous thing. Each one of the books in this set could likely kill you.

I’m a pretty big Doctor Strange fan, and have been for years. He’s an interesting character, and one that’s pretty hard to do correctly, mostly because he’s incredibly arrogant and aware of his powers… but at the same time broken and defeated. For the character, magic was a way for him to get back to what he truly loved to do, which was being a surgeon. Turns out, he was great at magic, but absolutely nothing he could do would ever restore what he lost. It seems like the movie is playing pretty close to that theme, which is interesting. Though, I suppose, you could argue that the Marvel movies, top to bottom, are about fundamentally broken characters).

This is the only set we’re going to get for Doctor Strange, most likely, until he shows up later on, and it’s great that it only runs $29.99. What’s not as cool is the “Target Exclusive” tag that it carries (sorry, Canada), which means that LEGO brand retail won’t be carrying it. You need to hit up Target or Shop@Home for the set. At 358 parts, three minifigs, and that great low price, this could be a great little set. On the other hand… when I look at it, for some reason I keep thinking it’s just the Big Bang Theory set in some Marvel cosplay, which is weird.

I think my big problem with video reviews, outside of just hating the sound of my own voice, is that when it comes to LEGO, there’s just not a whole lot to show in a video of a LEGO set. I know we should do them, since people hate words and love the YouTubes… but it could just be a sign that I really live up to the A in AFOL. Make of that what you will… 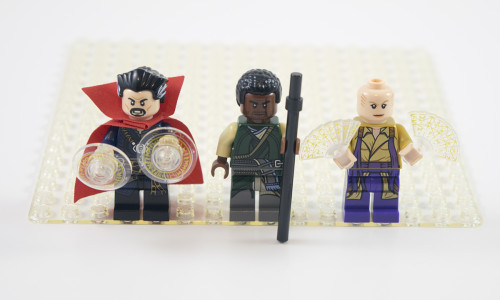 We get three minifigs in the set, on par with the last one-off MCU set we got (Ant Man), and from what we’ve seen in the movie, we’re hitting three big characters… though no bad guys. I’m actually in an information blackout for Doctor Strange, so I haven’t looked at news, teasers, or reviews in a couple of months, but I know that all three, Doctor Strange (duh), Karl Mordo / The Operative, and The Ancient One / Whitey McWhitewash are all featured heavily. So not a bad lineup at all for it. 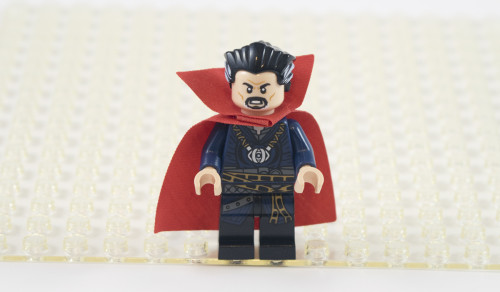 This is a curious character, in that it looks very good for a comic version of Doctor Strange, but not that great as a representation of Benedict Cumberbatch. Part of that is the limitation of LEGO… he’s a fairly skinny and tall-faced guy, and that unique look doesn’t work in LEGO that well. It’s the same issue we get with highly stylized characters, like Sabine, that just look off in LEGO form. 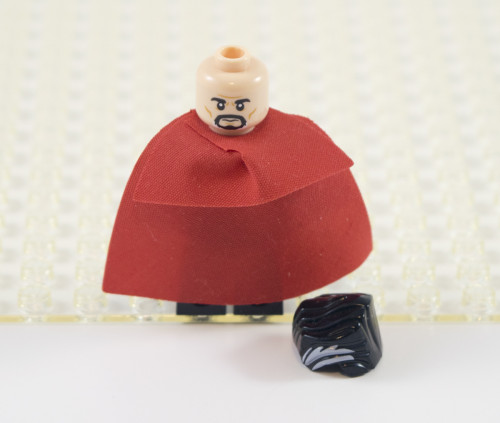 Yet still, as a Strange Figure, it’s great. The blue could be a little bit brighter for a comic book feel, but the movies always go darker and more muted for costume choices. Please take note, Marvel… some of us might want the yellow and blue spandex craze to come back at long last. I like his annoyed alt-face here, since I can just picture it saying “Really, Spider-Man… again?” when something awful is happening in New York. 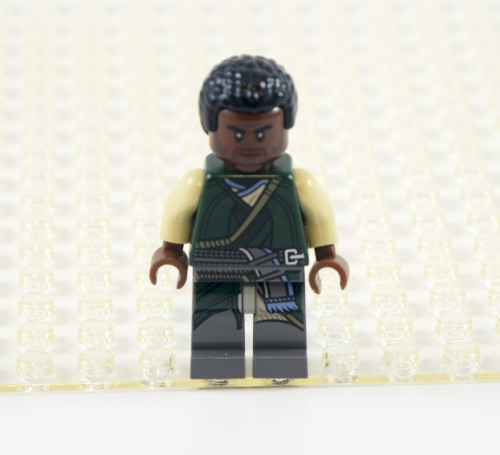 Truth be told, when they first announced Doctor Strange, Chiwetel Ejiofor was the guy I wanted to be given the character. I don’t typically mind when they revise characters with different races/genders/stories/etc… it worked out great for Nick Fury, and in the comics, Khamila Khan as Ms. Marvel is great and I’ve quite enjoyed the whole Jane Thor series.

That being said… my reasoning had nothing to do with his look or race. I just thought that he could do that perfectly insane, smug, and confident vibe that Doctor Strange needed perfectly. Plus, it’d allow me some wonderful Head Canon when I watched Serenity next time, thinking that Steven Strange grew up to execute children.

For Mordo, we getÂ the opposite of Strange… the comic look for Karl Mordo (who is a villain, and I fully expect it to go that way in the movie, ultimately) is very over the top and generic bad white dude. Go check it out, and you’ll be able to imagine him as the evil wizard in every LEGO castle series since the early 90s. Yet, the movie look is just spot on for the character and for the actor. 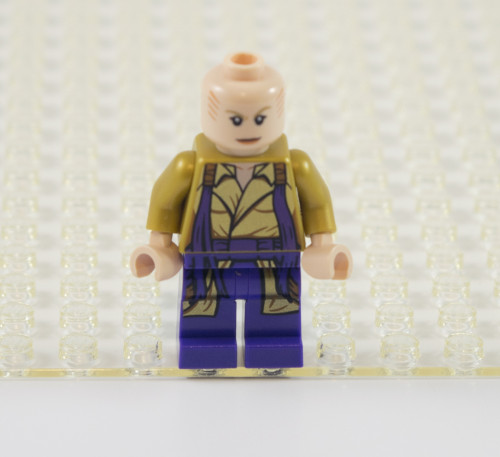 I’m going to sidestep the whole controversy with The Ancient One (outside of my joke above, and this part explaining it); this is about the set, not the fact that Disney whitewashed a character. I know why they did it, it sucks that from a business standpoint it makes total sense for them to do it… but I don’t have to like it.Â I’m certain that Tilda Swinton will do great in the role, and a whole lot of props for her shaving her head and apparently avoiding the sun for three years to do it. 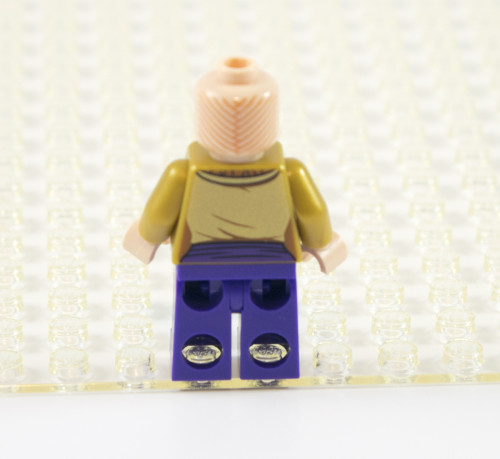 As a minifig, this is a pretty solid, and very surprising, look for the character. She’s female, but glaringly so or over-stylized (like we see with Black Widow or Scarlet Witch). The face was kept simple, which matches what we see in the previews, though I’m not certain about that look for the “shaved” part of her head. I guess they didn’t want us to think she was missing hair?

One thing to note that was very cool in this set is the accessories that Strange an the Ancient One both have. They are clear, with gold printing and runic symbols. I’m not sure how much access LEGO had to pre-production stuff, but everything on there looks like Norse Runes, which would seem to indicate a tie between Magic and Asgardian technology. Also, they look very cool. 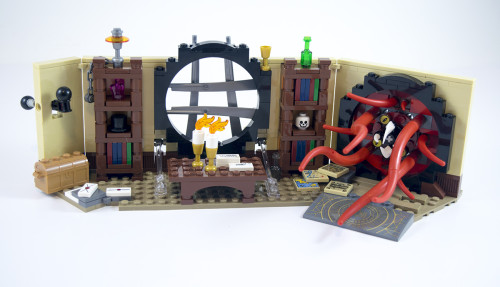 Anyone that’s built the Big Bang Theory set probably understands why I thought about it while building this set. There are obvious parallels, like how books are made, the colors of the walls, and of course the monster growing out of the walls trying to consume our mortal souls and plane of existence. 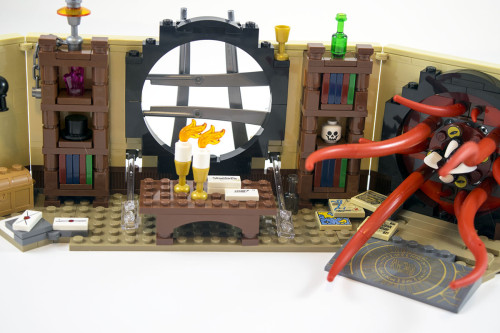 We haven’t seen much in the way of the Sanctum Sanctorum, other than Doctor Strange in front of the iconic window… but suffice it to say it’s a very weird place. In the comics, it’s as much a prison and bunker as a storehouse, and all sorts of crazy things happen there. Â That, and everything inside it is likely to kill you at any given point in time (and sometimes, well outside of time).

The bulk of the build is around the mysterious creature (LEGO’s description) that’s in the wall, and let me say this… it’s easily the most disturbing LEGO thing that I have ever built. Watch this video, and you’ll see what I mean. My hat is off to the designer that put together all that technic stuff and parts to make such an unsettling play feature, something that so perfectly fits with Doctor Strange.

The big downside to the set is that most of it is just filler around that. The window is cool, but sort of just slapped on. We get a few pegs to move characters around, but they’re more trouble than they are worth, and didn’t pass the four year old test at all. My daughter was far more interested to turn wheel and move the “spooky monster,” and just put the characters on the table instead of those pegs.

In a bigger set, or more sets, there could have been a lot done with the material. As it sits, this seems more like the start of an idea that needs a lot more parts and efforts to build on. I’m curious to see how the place works in the movie, and what you could turn it in to… but right now, outside that fantastic monster, this is mostly filler parts. Still, this set only costs $30, has three unique figs, and delivers a whole lot of parts for it. I’m going to call it a four out of five.

Verdict: 4 out of 5. You should buy 76060 Doctor Strange’s Sanctum Sanctorum right now from LEGO Shop@Home, before it goes all Ant Man and shrinks out of sight (seriously, that set vanished and never returned very quickly). 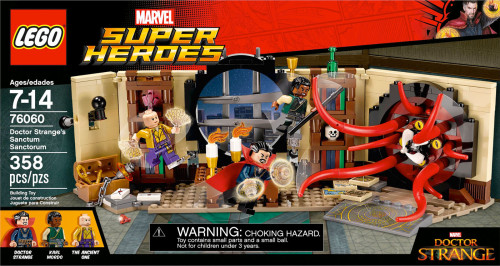