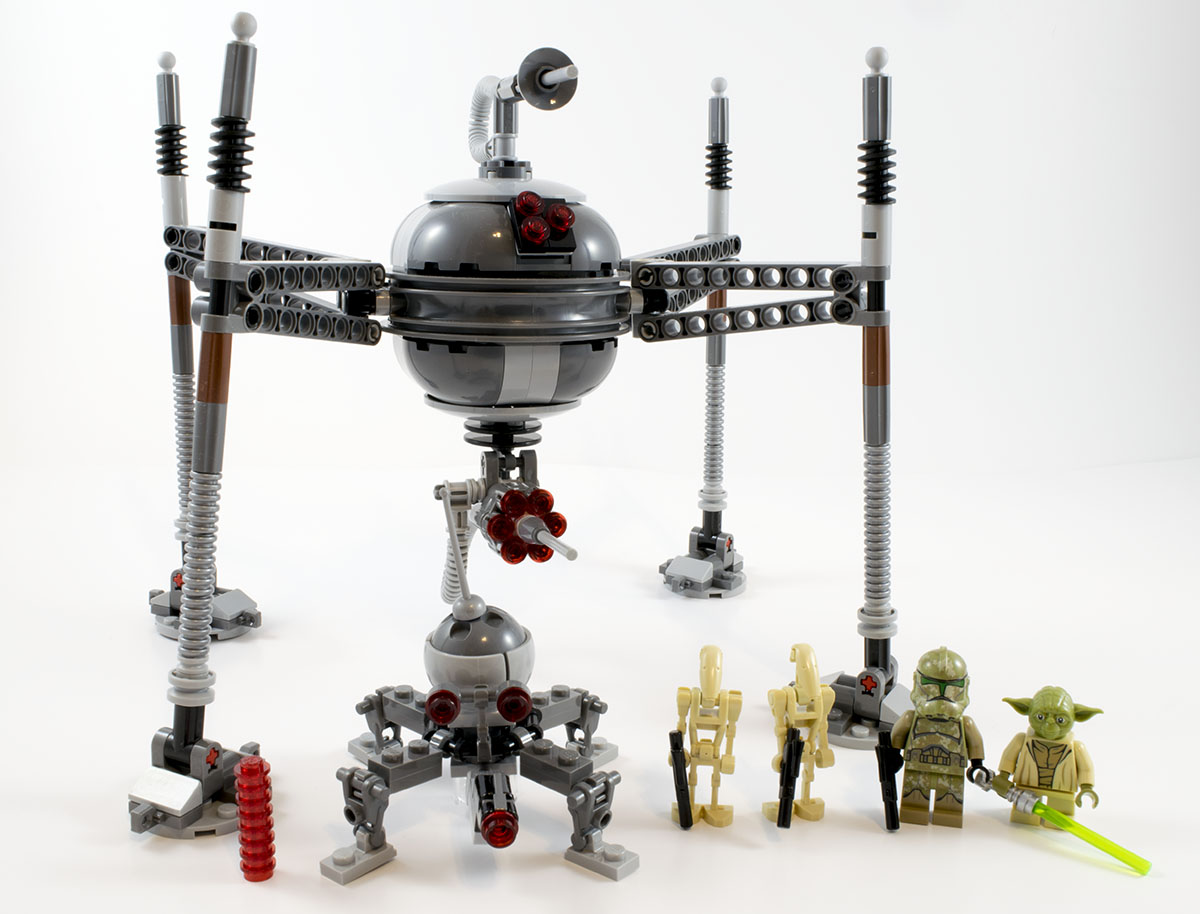 Selling to kids is a lot different than selling to adults. There’s a limited window for that customer, where they are coming in and leaving the market. At the same time, there are new kids coming in right behind that customer, looking to pick up the hobby. That means that re-releasing a set every few years is trying to make sure that the new batch of kids can find something recognizable to purchase… and regardless of how we feel about those prequel movies or cartoons, they are more popular with kids than they were with the adults that grew up with the original movies.

Of course, all of that being said… there has got to be some more popular stuff to release than Stumbles McSpiderwalker here, last seen in the 2013 set of the same name, 75016 Homing Spider Droid, which it feels like I just reviewed a couple of months ago. That was in that little gap where I wasn’t putting point totals on there, but I wasn’t the biggest fan of the set despite my love of walkers.

The price isn’t different, though the minifigure lineup has changed… and that’s pretty much what I wrote about the set last time. I asked Ace if I could just copy/paste the old one, and he told me to shut up and watch BvS again as punishmentÂ (actually, I didn’t, I just like making up fake responses from him). So instead, I’m going to review 75142 Homing Spider Droid as if it was some brand new set I wanted, and not just a $30 filler set that got me to above a certain price target when trying to get a promo item at my LEGO store (this is a TRU exclusive in the US, otherwise).

Because the AFOL community is not at all given to hyperbole and vitriol, it may have escaped everyone’s notice that LEGO is prone to tossing out some remakes for things… you know, I’m not going to be able to keep up that level of sarcasm for this whole review. Even I have my limits on snark.

While I’m no fan of the most recent controversy in the UCS world (and how it saves me money), I understand that in the system world, remakes are to be expected and are important for the life of the theme. We are absolutely not the target market for the majority of LEGO’s products, we’re more of a happy byproduct for them. As a business, LEGO cares about getting their product into the hands of kids; that adults are buying them is cool from a certain sales point of view. However,Â if LEGO was ever put in a place to choose between us and the kids, they will take kids every single time.

The biggest knock I have on this set over the previous version is that we lost a unique character,Â Stass Allie, and got that disfigured Kermit version of Yoda. Our generic clone has also been swapped out for a jungle camo version instead. Technically, none of these are unique, though Brickset seems to think so thanks to the neck bracket that we got from the Geonosis Duel set. 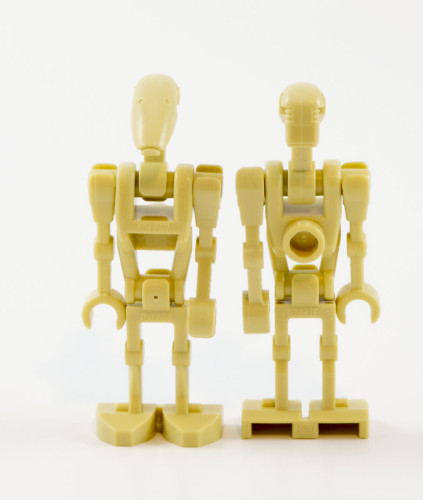 These are battle droids. They are basically the Twiki of the Star Wars universe. Also, they’re in several sets and haven’t changed in years. 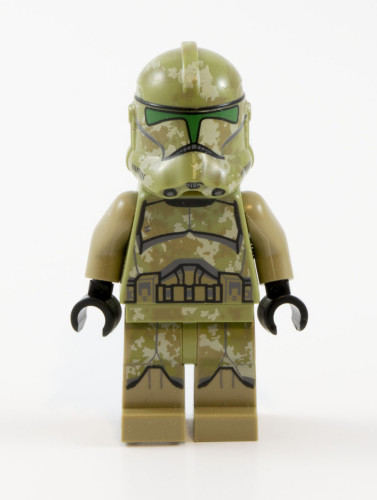 It’s a weird choice that LEGO decided to include the Kashyyyk trooper instead of Gree, but I assume it’s because they had a lot of battle packs they could repack him from. He’s unchanged from the battlepack. Side note… how do Wookiees even say the name of their home planet? You have to assume that they put all of those y’s in there, but how do you growl a y? 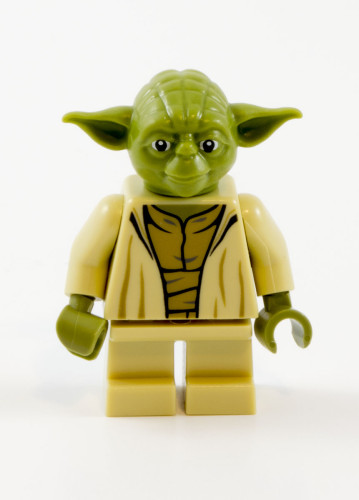 The Yoda figure is the same outside of the missing back plate in the duel set, but that was the only set this version was available in previously. In fact, Yoda has only been available in a couple of sets in recent years… which is weird, since there was a whole cartoon named after him. The only set that included Yoda for Yoda Chronicles was a Comic Con exclusive. All that really tells us is that LEGO apparently doesn’t understand the adult market at all (or their core market, I guess). 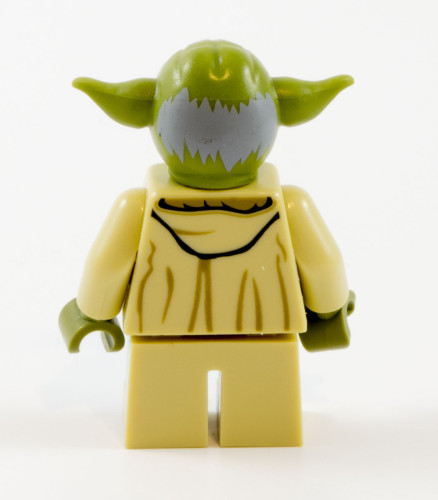 Yes, the gap is intentional… I just like to messÂ with some people. My criticisms of this figure from the duel set still stand… it’s probably the worst offender of the “over-detailed” mix, to the point that it simply doesn’t look right at all. I prefer the original mold, but honestly, the minifigure that caught the “look” of the character best is probably the Clone Wars figure. At least for the Clone Wars style. The humans may have looked awful in that series, but the non-humans were typically pretty fantastic. 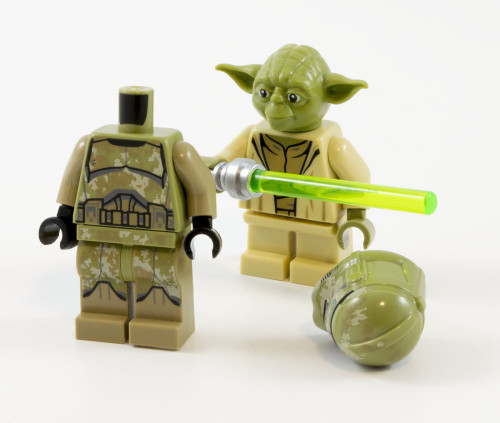 This would have been a more accurate portrayal of how the clone trooper should look when Yoda was around. Probably would be a bit tougher sell to kids, though. 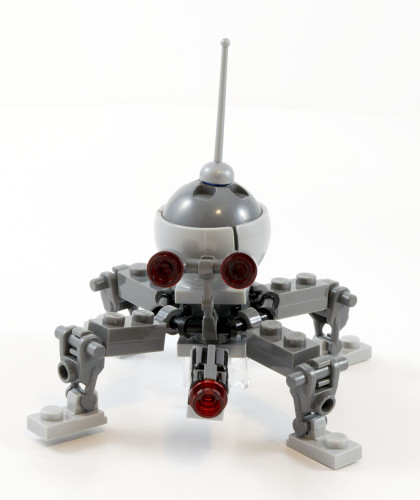 I didn’t feel like comparing this to the old version… it’s mostly the same. The two big changes are using a CMF fencing foil instead of an antenna (a very nice upgrade) and replacing the technic gun bit with a stud-shooter brick (a decent upgrade). He’s not a bad robot, it’s just that the overall makeup of the set hasn’t changed a whole lot. 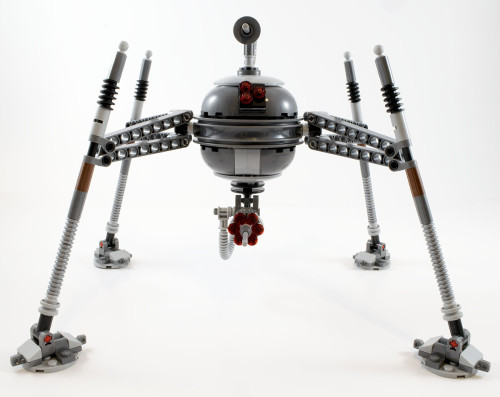 It’s hard to not just echo the same thing when it comes to the Spider Droid as well. There’s basically one change from the last set:Â the six-shooter stud launcher on the bottom instead of just a dish. I’m sure a few other parts have changed as well, but that’s the only thing that stuck out. 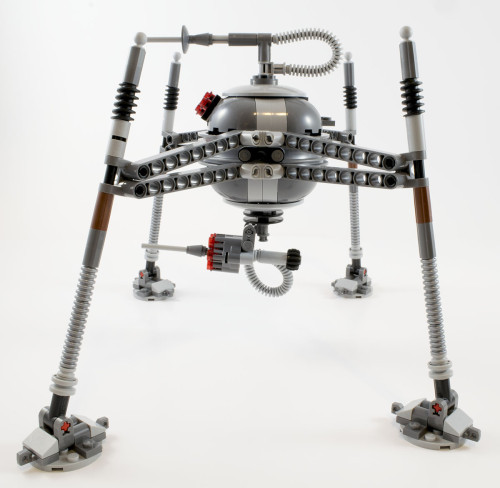 From a playset feature, it’s okay I guess… but the thing just comes off as oversized compared to the rest of the build. My complaint also hasn’t changed from the battle packs that featured this… it’s fun for about two seconds, and then annoying to reload. My daughter loved firing it, but had no interest in picking up the little studs once they were fired. 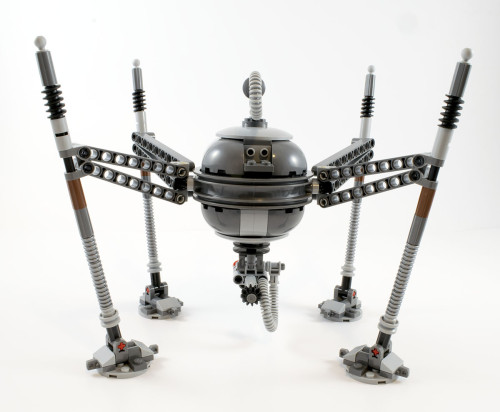 Otherwise, pretty much the exact same problems exist that were in the last version of this walker, in that the legs would often slip under and it ends up doing that little squat thing like it’s about to pinch out a battle droid. It’s hard to show in pictures (or in a video… I tried) how awkward the model ends up being once you have it put together. It doesn’t really walk, since the legs are locked vertically for the most part. You get a bit of movement, but nothing really other than in or out, and the legs together prevent you from positioning it in anything but the in position above, or the out that is in the other pictures.

With all the new TFA, Rebels, and Rogue One sets taking up spots in the lineup, we’re going to get less in the way of PT and OT sets. On the PT side, there is pretty much this, Obi-Wan’s Interceptor, the Hailfire, and the new Clone Turbo Tank. Both the Hailfire and this guy feel pretty pointless, since we’re not that far removed from previous versions and they don’t strike me as all that popular in the first place. Obi-Wan’s was more overdue than anything, and I haven’t picked up the CTT yet (and not sure if I will). I get the whole re-release cycle, but this one just feels like they needed to dumb excess inventory from old sets and could just dump a slightly updated version out. If you’ve been buying for awhile, you likely have one, and if you’re buying for a kid… there are honestly better $30 sets out there. This is aÂ two out of five. On a deep sale, maybe worth it, but there’s very little to justify it as a purchase. 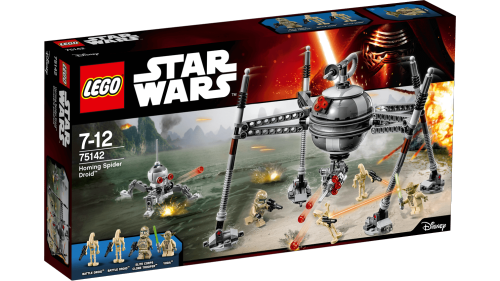