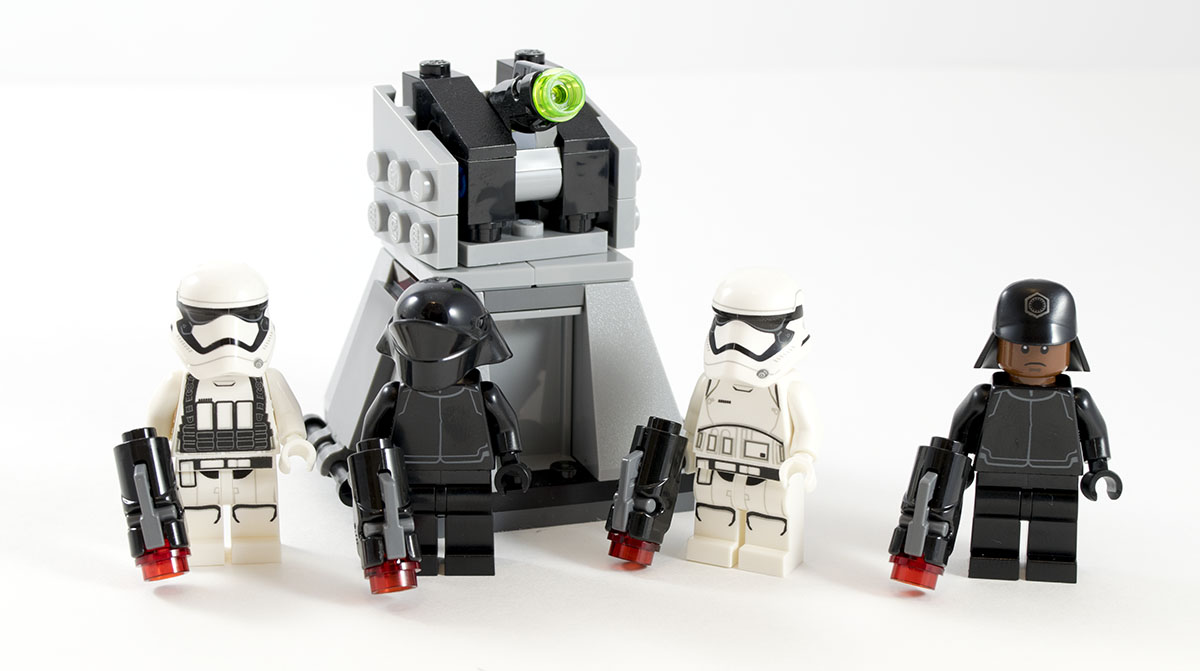 When I reviewed the Resistance Battle pack, one of the things that I liked about it was the troops were all generic and could drop right into an army. I also said I’d talk about the better of the two when I reviewed 75132 First Order Battle Pack. Three soldiers and an officer was a great way to bolster the ranks of a small band of rebels to army-sized proportions.Â When we saw the first leaks for these, the biggest problem I had was that there wasn’t a solid builder for Stormtroopers on the First Order side… the battle pack only came with one generic and one guy who apparently has a vest.

Of course, that concern was shoved to the side pretty quickly with the other things about this set: a unique officer that is a person of color, and a generic trooper. There’s the other extreme from too specialized, and that’s when your army consists of nothing other than the foot troopers (figures for rebels in the OT that weren’t characters are really bad).Â So… this may not be the best pack for creating a Stormtrooper Army, but it becomes a pretty great pack for creating a First Order army, which is more than just Stormtroopers.

It’s $12.99, like all of the battle packs, and at 88 pieces, is substantially lighter than the Resistance pack. Of course, these things are all about the figures… parts are basically just gravy on top of that so we hope that they’re good parts. There will be some minor spoilers to Force Awakens in this. Well, not spoilers, information. Spoilers is now a word that has lost all meaning when you get people screaming about the fact weÂ spoiled that there is a war when all you said was the title of the movie.

I’m going to end my spoiler rant with a statement that I want to start ruining movies for anyone that complains about spoilers when I say something like “the first order has a variety of soldiers past just stormtroopers.” There are certainly spoilers to things, but discussing things that are in the posters/trailers/toys/set box art, etc… not spoilers. Just… info. I get the desire to live in a black hole of information, but also understand that it’s pretty much impossible. Especially in places, like this site, where movies like thisÂ is the whole reason we exist!

The First Order figured in far more prominently than the Resistance did. We saw Resistance pilots, but their troops were never involved in a battle. They were so “unknown” that Finn didn’t even know who they were when asked by Poe on the Finalizer. The First Order, on the other hand, tore through a whole bunch of guys without names on Jakku andÂ Takodana, lost a few people, and generally were causing problems. In short, they were the antagonist as much as Hux or Kylo Ren were.

We get four different minfigs here, two that we get in other sets and two that are unique. Well, kind of unique… the officer has a unique hat and the stormtrooper with a vest is a unique torso. All of the rest are shared (stormtroopers are in four sets, the generic trooper is in three). All come with a stud-launcher blaster, unfortunately… so stock up on your regular blasters to replace them. 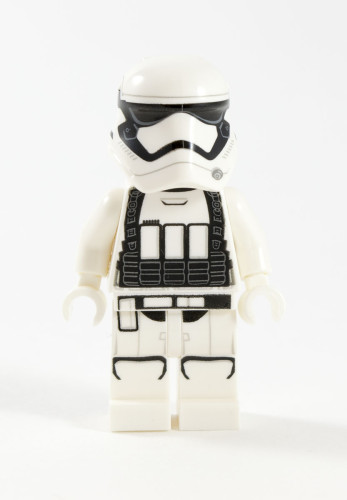 I kind of wish that the printing on the vest extended up a bit past those white boxes (clips or something… do blasters have clips?), because without it, this looks less like a tactical vest and more like a suicide bomber vest. The look in general is something that I know was in the background of the battles (or maybe on the Star Destroyer), but I can’t remember where I actually saw it. That makes it hard to say how accurate it is. I do know that the pictures I find of him (specifically, his toys), show him with a huge blaster. I really wish that would have been included in this, because it would have added something nice to the figure. 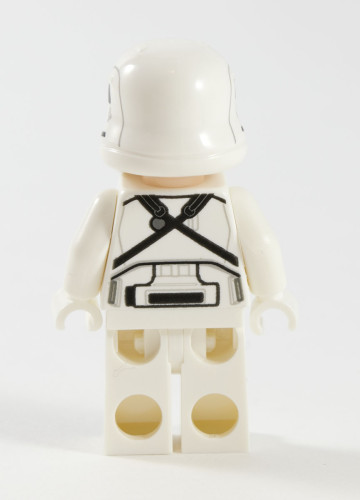 LEGO did a good job in extending out the printing on these guys, so the legs and torsos match up. The back has the straps for the vest… which looks weird. I actually own a tactical vest like that (which are great if you want to pretend to be all weekend warrior or are an actual soldier, but are just impractical most of the time otherwise)… and they don’t have straps like that. This is more like he’s actually carrying one of those baby harness things. Do they have Stormtrooper baby armor? Cause that would be pretty awesome. 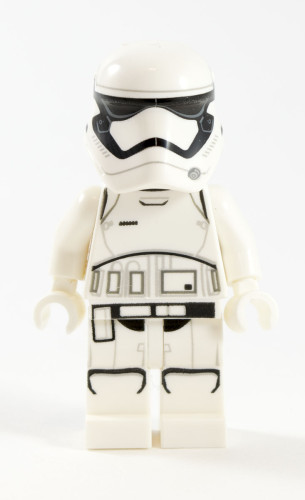 Our regular Stormtrooper is just that… a regular stormtrooper. These guys grew on me a whole lot more after seeing the movie. Â I need a lot of him, which means I see a lot of this particular battle pack in my future. I do wish they would have done a bit more for the blasters on these troops as well, and given us a mix of the white and black we saw throughout the movie. 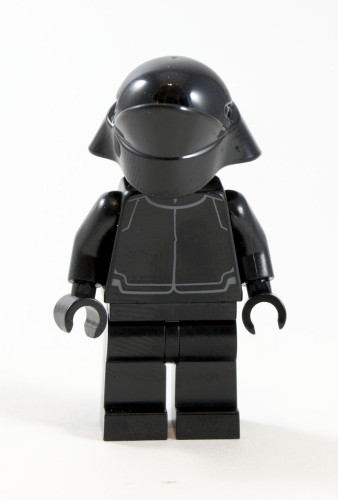 Generic trooper / technician / whatever guy is actually seen a lot more in the movie. They’re working on the Starkiller, set up on the Star Destroyer, and following in after the shock troops to clean up. We get them in Kylo Ren’s Shuttle and the TIE Fighter as well, and while they don’t make up the bulk of the forces we see in the assembly above, they are there in numbers. In any army, these guys are more common than the shock troopers, because moving forces around takes a lot. Of course, there’s an implication in the movie that Stormtroopers aren’t always in that role, as Finn also worked sanitation at some point. 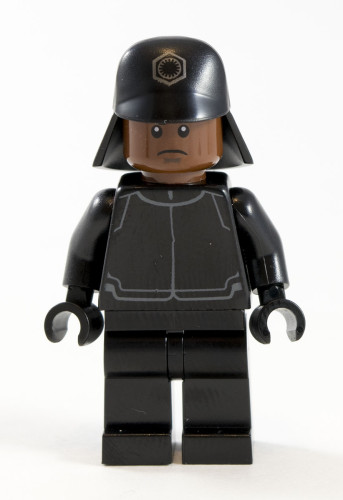 The real standout, however, is nameless officer guy that gives us a person of color head, something that’s always welcome. The hat itself is unique, as it has the sides turned down (while the other officers turn it up). The head is also used for a generic trooper guy in Kylo’s shuttle, and the torso is the same as the trooper. Regardless, I love that we get a generic head like this in a reachable set… the ability to make a decent variety of characters has gotten quite a bit easier in the last year or two, and this head will help a lot. 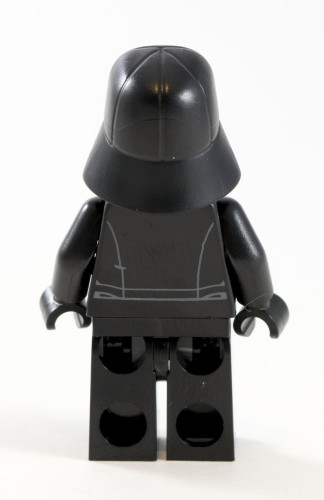 The only knock I have on the figure selection isn’t specific to this figure, it’s the inclusion of just generic heads for the other troops. Including a female head would have made me consider a new rating scale. We know that the First Order had female troopers and stormtroopers (past just Phasma too… it was a female Stormtrooper that informed Kylo Ren about the Rey setting off an alarm while she was trying to escape Starkiller base), and they were also part of the command crew for their Star Destroyer as well.

That being said, look at the variety we’ve gotten for the First Order officers. Just look at them. That is absolutely fantastic. Sure, one is Hux, but the rest we’ve seen are unlike anything LEGO has given us before. The real bonus for this set is that the character torsos and heads are all generic enough that you can swap them around (like LEGO has done in the sets). 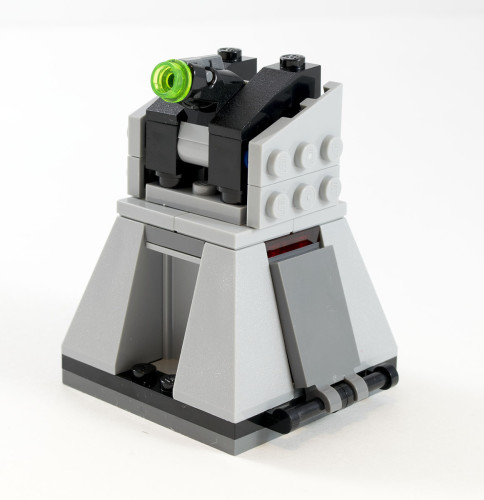 The non-figure part of the set is aÂ gun emplacement that seems… well, kind of goofy. It’s like they forgot to build the gun part, and just stuck a regular blaster in there. The idea behind it isn’t bad.. I actually like the flip-out parts and getting tall corner slopes is very nice. Just that the top of it seems like they forgot something. I would have rather seen a flick-fire brick or something than just the stud-launching blaster… something to at least make it look like a turret. 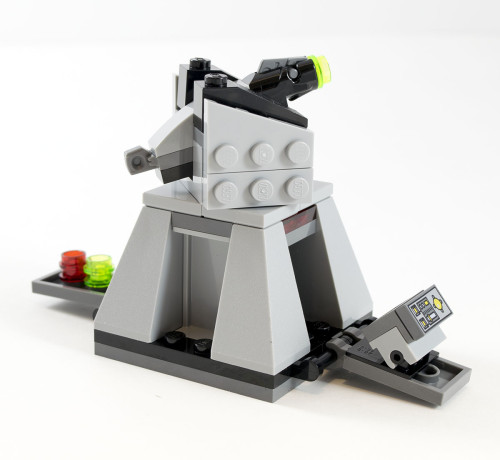 The cool(ish) feature is that it flips down to show a simple control box and a way to store the extra studs for the blaster. That’s a feature that any set that uses stud-launchers could use, and I love seeing it here. Otherwise, let’s just admit… this guy is mostly parts. You’re either going to use it as a starting point to build some good Starkiller gun emplacements, or just a way to get cheep slopes and panels. Either way, I guess that’s not a bad problem, even if the gun is kind of goofy.

My measure for battle packs is “do I want to buy more of these”… and this Battle Pack, more than any in recent memory, satisfies that requirement with flying colors. And I mean colors being flown by Poe or something, not a First Order TIE pilot. This is a great army builder set that fills in a lot of places in your First Order army. I would have loved to see another Stormtrooper… and hate to admit it, I would have gladly paid 14.99 or 15.99 for this set to get an extra.

Yet, I don’t know if I’d give any of these figures up specifically. I wish the vest trooper would have been with the TIE instead, and two regular ones here, but release cycles didn’t allow that.Â A set that has me wanting more, and even offering to pay more for slight improvements, is firmly in that five out of five territory. This is probably the best battlepack LEGO has made since we used to get Stormtroopers and Rebels in bulk. You can, and should buy it. I know I’m going to get more.

Verdict: 5 out of 5, one of the best battle packs made in a long time. You can, and should, buy 75132 First Order Battle Pack right now on LEGO Shop. 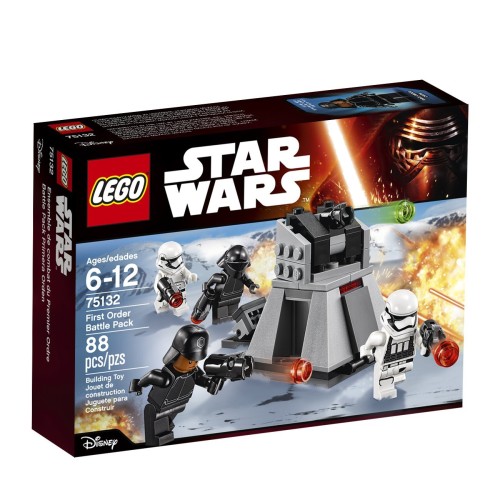