One of the strange paradoxes of Star Wars, and LEGO Star Wars along with it, is that some of the best sets have come out of some of the worst movies and scenes. Sure, there’s the Falcon in it’s overwhelming awesomeness, but one of my all-time favorite setsÂ is still the Republic Gunship, an insanely swooshable build that is from what is probably the worst of the movies. And while the Jedi Interceptors and the Jedi Starfighters are all kind of vanilla, they’re all pretty decent toys and builds (except the latest one). In short, bad movies made for some good toys.

The Flash Speeder is a vehicle that rivals that T-16 Skyhopper for the amount of time spent on screen. It’s notable for being one of theÂ second-wave Episode I sets, released in 2000Â after we knew just how god awful the source material was. I, like many, many other fans, never bothered to buy the original. It’s kind of a shame, it was a basic little ship that gave you some green parts (which were fairly rare back then) and a nice generic figure. We’ve waited fifteen years for the remake, and it comes along with a few other old remakes like the aforementioned T-16, the Imperial Shuttle, and the Battle Droid Trooper Carrier.

It’s kind of surprising that we’re getting this remake now, since a few years ago, LEGO was just crazy for the speedersÂ builds. The Mando Speeder, BARC Speeder, like eleven different Snowspeeders. You could have probably sold them on making the Jar-Jar Speeder if you would have made some fan art. I’ve covered a lot of those in the past, so reviewing 75091 Flash Speeder was sort of a no-brainer for me. At 312 parts, 3 minifigures (plus two battle droids), and only a $29.99 price tag, there seems to be a surprising amount of value tucked away in this little set. So, do we have a Darth Maul vs. Jedis (the good part of Episode I), or is this going to be a real pile of Bantha Poodoo (the rest of Episode I)?

I’ve always considered the PT sets and the PT movies kind of separate, to be honest. On one hand, I review a lot of sets for this site that I wouldn’t normally buy, so I have to try and keep a (slightly) open mind. On the other, we would miss out on a lot of really good sets if we skipped all of the stuff from movies we didn’t like. While Battle Droids were absurd in the movies, and Clones were mostly fodder and murder machines, as figures and toys, they are undeniably cool.

This set has some pretty outstanding figure value out of the gate, on par with some Battle Packs (and better than others). Three minifigs, two nameless Naboo guys (a Security Guard and a Security Officer), our Gungan buddy Captain Tarpals, and a couple of standard battle droids.

Battle Droids are a figure that you just have to love to hate. They’re fragile (so, movie accurate), never work connect quite right, and you always have too many yet somehow not enough. Nothing really new here,Â and there are a few different sets that have these guys in them right now (75037 Battle on Saleucami being the cheapest, along with the new MTT and a few larger sets like the AT-AP or the Droid Gunship). 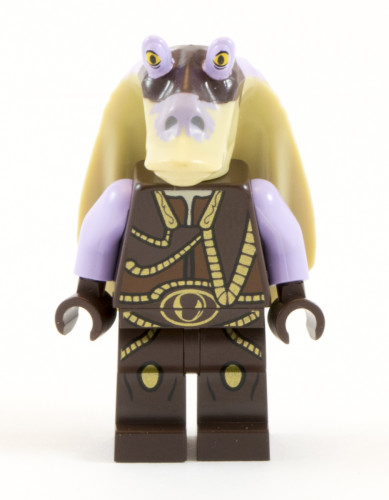 Captain Tarpals was the Gungan involved in the big battle that we cared less about in Episode I, between Gungans and Droids.Â It’s actually kind of a shame that the whole scene was undermined by all the Jar Jar nonsense, because it was one of the very few times in the prequels where there was something at stake for the characters involved. The Gungans were fighting for their lives and their planet, and had something to lose. Since most of the rest of the battles involved disposable clones mixed with disposable droids, this had a certain weight to it. 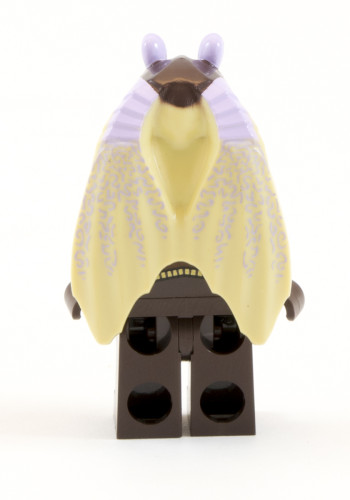 It’s a unfortunateÂ that everyone hates Gungans because of one (or two… Boss Nass was even worse than Jar Jar in my book) characters, since they were visually distinctive and had a chance to be an interesting character. Unfortunately, their entire culture got ruined by one particularly bad egg, so guys like this get pushed out. As a representation, it’s not bad at all, though he could have used some better printing around the nose area… the captain had almost a mustache look at the end that’s not seen here. His lavender arms are cool, but since they’re shared with the Cat Lady from the CMF line, not incredibly hard to get (even though they’ve only shown up on six figs). 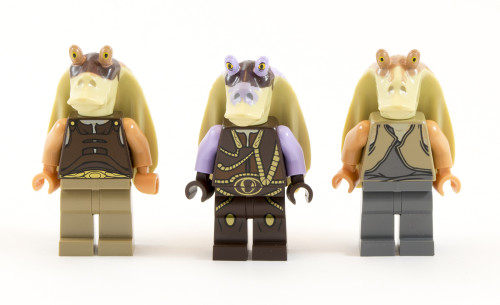 We now have three different Gungan figures in the new(er) style. My dream of an all-Gungan TIE Fighter squadron is one step closer to fruition! 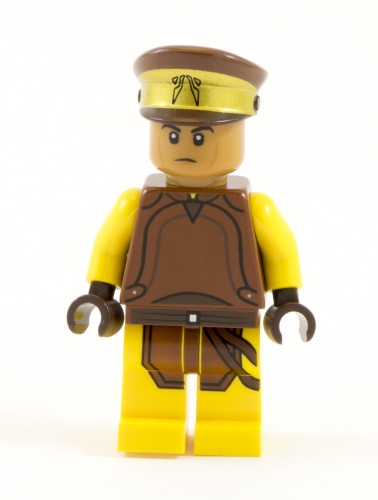 We get another Naboo guard, one of the people of color (and the face that should belong on Boba Fett / Jango Fett), and he’s the same as we got in that hideous MTT set. He was a high point for the set, and I welcome getting more of him here, in a much cheaper set. This guy is still a standout figure, and I look forward to being able to get more of him. 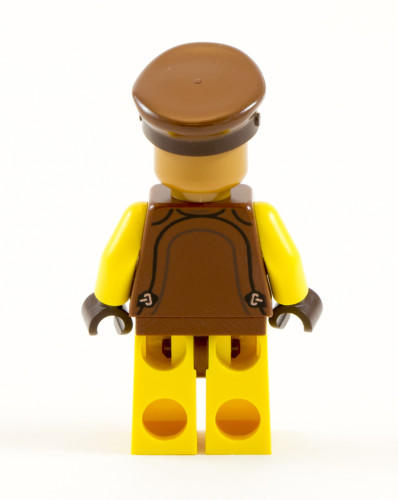 He also has the least absurd of the various Naboo hats, a planet that’s known across the galaxy for their wide variety of stupid hats. I mean, they win absolutely every hat party the ever attend, but the “Ugly Hat Day” is never going to catch on like “Ugly Sweater Day.” 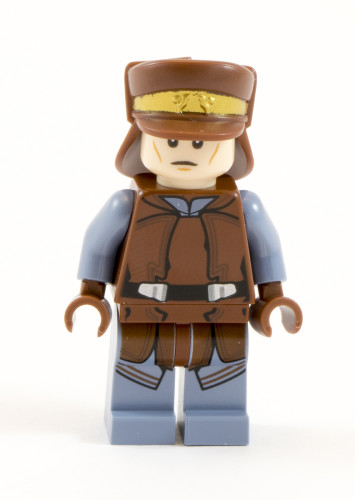 The new figure is an officer, who didn’t get the “no ugly hats” memo. His torso and legs are both unique, though, even if having two buckles doesn’t make a whole lot of sense. I wasn’t aware that Legolas was on Naboo… I wonder if he used a bowcaster? Or it could be that they had to do something with all the heads in the Hobbit sets that no one wanted or purchased. The big issue I have with this figure is the fairly shoddy printing on the gold band around the hat. It doesn’t look quite as bad with the figure just sitting there, but there is a noticeable quality problem that pictures like this really show off. 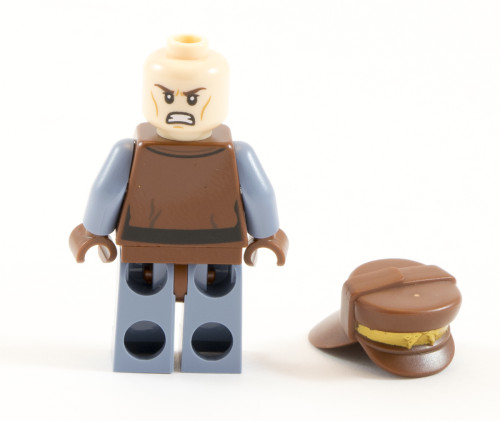 Since this guy has a big hat, he also gets the angry alternate face, which fits for a soldier who’s fighting to defend his home world. However, the issue is that he’s basically angry at toasters, and I don’t think they’re going to care when he blasts them all. The printing issue continues around the entire hat, and it seems to be unique to this particular type of helmet. 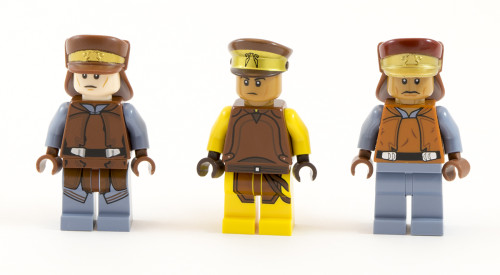 We now have three versions of the Naboo figures, with two of them being people of color, and that is just awesome. The guy on the right was my old buddy Captain Pancake (also known as Panaka) from the Sith Infiltrator set. Now if only we’d get the female pilot seen in the hanger for the end flight, we’d have the most diverse lineup in the movies. 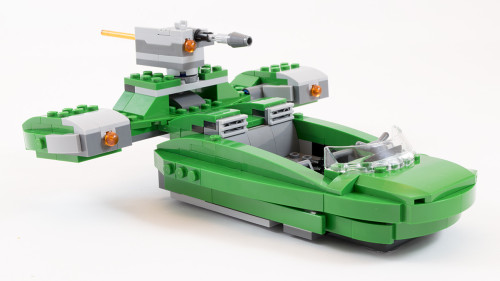 The speeder itself is oddly fun to build. While this particular vehicle is neither iconic nor particularly sleek and sexy… it’s just got a lot of little features that are fun to put together. The addition of a whole lot of green slopes certainly helps it… you can just see all kinds of parts to slap in a starfighter MOC on this guy.

The work to get the flick-fire launchers built into the engine pods and top-cannon are particularly nice. While I’m hard on these things a lot, LEGO has been getting a lot better at building those features into sets in ways that make a lot of sense.

The pods rotate upwards while the cannon pivots, which does make this thing feel like a decent little vehicle to put into a battle MOC. Sure, one has to question the logic of building an open-cockpit vehicle designed for fighting, but the Naboo army seems to be more on the “looking cool” than “being effective” side of things. 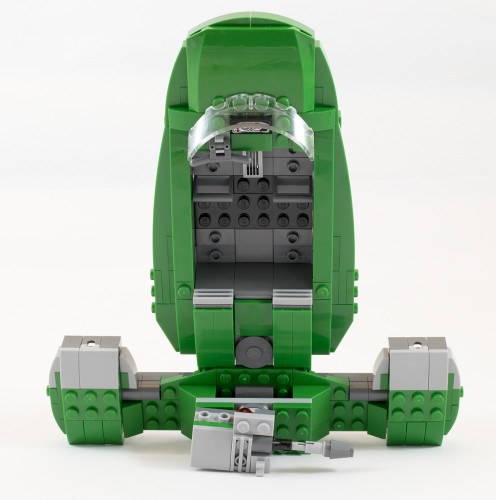 TThe nicest thing about the interior is that it’s designed to actually sit a fair number of troops, with spots to seat four troopers and stand another two. We can also pretend that John Deere green is a really good camouflage color when you’re hanging out in the jungles of Naboo. Maybe Gungan blood is green, and this thing is designed forÂ crowd control.

This is an oddly nice little set. I built a whole lot of the 2015 Star Wars sets, and in that middle range, this was easily the most enjoyable set I put together.Â It’s easily one of the better speeders we’ve gotten, and there’s some real value packed into a $30 set. The minifigures are solid additions, even with an extra Legolas face. It’s not a “wow, gotta have it” set, but you won’t feel like you wasted your money when you pick it up. That makes it a solid fourÂ out of fiveÂ in my book.

Verdict: 4 out of 5. Decent looking speeder, some good minifigs, and good parts. You can pick up 75091 Flash Speeder right now on Amazon.com. As of this writing, it was sporting a healthy 17% discount at $24.98. 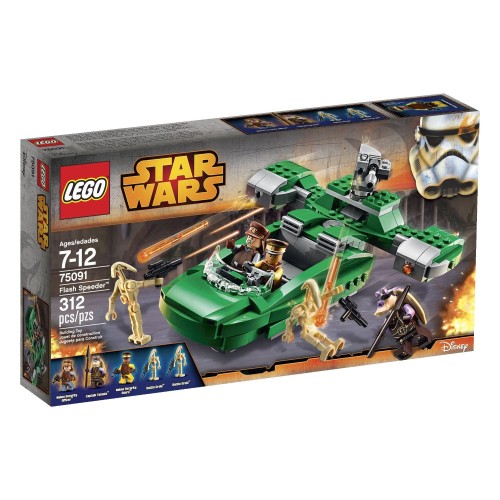